Wyatt and Lady.  If ya’ gotta’ eat Zucchini, the least those hoomans of yours could do is put cheese on  it! 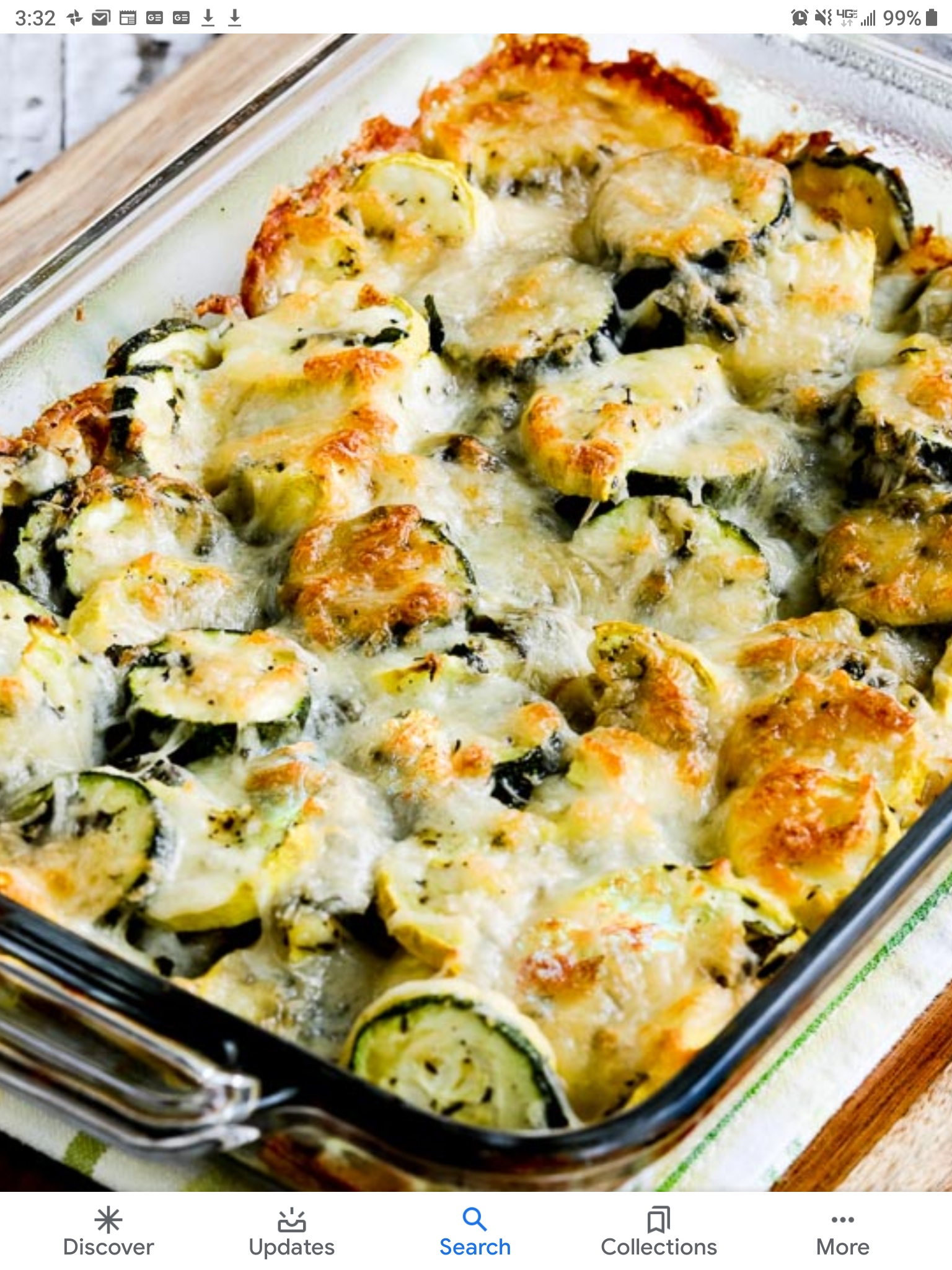 Ohhhh! That looks delicious!!! Thank you all for the positive words! Lady has come a long way! I’m hoping to get some more videos of her walking today in the yard and I will share those 🙂

Wow that makes us hungry! YUM! OK I’ll make a note of that and be sure to give Wyatt lots of gooey melted cheese too (NOT!).

I’m so hoppy to know that Lady is doing better! Can’t wait to see the videos.

Just wanted to provide a Lady update… the vet called yesterday and told us Lady has a rare infection so the original medication they gave us last visit wasn’t working so we got TWO new medications. Poor Lady can’t catch a break! Aside from that, she’s been doing really well. She’s getting more comfortable with her mobility, so she’s moving around a bit more. Yesterday, she actually met my sister and nieces at the front door to greet them (something she hasn’t done since the surgery). Her new bed also arrived. It’s great!! She’s been moving between her new bed & her old one throughout the days. She’s like Goldie Locks!!

She’s also been coming to the table to beg for food and actually puts her head under our elbows in hopes to get some attention/food. When we first found out about her tumor, that was something I didn’t think I’d ever see again. It made my heart melt. I’m wondering if we should switch away from dog food to meats? We gave her some steak last night instead of her normal dog food… it seems to motivate her a lot more than anything else can. I’m still planning to talk to the vet about nutrition, but is a high protein diet like this beneficial? Instead of the standard dog food? She’s definitely losing some weight so I don’t want to make any wrong calls and have her put any pounds back on.

We have our next vet appointment tomorrow to get the staples out (hopefully) and with oncology, so prayers for Lady!!!! I haven’t caught her walking on video yet, but here is a picture of her. I think she looks so regal 🙂

Sorry about Lady having an infection, but great news she is getting around better, and she likes her new bed. I did cook for Brownie, a meat and vegetable diet with omega 3 added. Vegetables such as Brocklie,  Kale and Spinich.  I also added vitamins and supplements to keep his immune system strong.

I know she is going to be happy to get those staples out. Love the pic. She has eyes like Brownie.

Awww she DOES look regal! I love her sweet face

I’m so glad she’s doing better, losing weight and moving around more. These are HUGE accomplishments for Goldilocks!

Despite the infection (so glad they caught it!), she’s getting her mojo and that is very, very good news. Here are some thoughts about her diet:

Since she’s on such strong antibiotics, her gut flora is probably wiped out. Ask your vet for a good probiotic supplement to kick start her GI system. They probably have one on hand called FortiFlora, it’s great stuff and super helpful for dogs on the mend. You can also add some DIY probiotics into her food as time goes on.

Regarding her diet: small bits of steak are awesome for her to enjoy every now and then but I would wait to make any kind of major diet change. There’s a ton of controversy about feeding a high protein low-carb diet to dogs with cancer (or any dog really). This article explains more, and gives you some food for thought to discuss with your vet tomorrow:

Does a Low Carb Pet Cancer Diet Make a Difference?

Let us know what the vet says!

Great idea Jerry about Probiotic. Brownie’s Hollostic vet put Brownie on a Probiotic for a healthy gut. I got it at Walgreens.

Brownie was 90 lbs at time of amputation. Once he dropped to 75 lbs he got around a lot better. Have you tried the dehyrated liver for treats? I found out today that Max and Sassy like grapes and strawberries.  Who knew! When Lady comes to the table for a bite you could hand her a slice of Apple, carrot or even a teaspoon of low fat cottage cheese. I have Brownie his supplements with a teaspoon of cottage cheese. If I put them in his food he would tip the bowl over and hop away.

Once Lady fully recovers you will continue to see her do things that you thought she would do again….

I have cats and have been told to NOT feed chocolate or grapes to dogs. Other than that I can’t comment on canine nutrition!

Lady is elegant. That blasted infection may make her feel yucky. I hope the vet has found the right antibiotic this time.

Lady is beautiful!!  This is such a great photo.  Of course, with a subject  as lovely  as Lady, it has to be great!!

Thanks for sharing.  We can’t  get enoigh of this sweet girl😊

Hi All! Thank you for the kind words, as always! We just got back from the vet. Not much that I didn’t already suspect was said.

She has cancer in her lymph nodes and maybe some nodules in her lungs. The vet didn’t seem too keen on chemo but did offer it as an option if we were interested. She said we could reassess once the staples come out… which, they did not come out today STILL! They want to wait another week because the infection is still bad on her incision. I talked about the mentioned probiotic above and they said it was a good idea. I also mentioned about diets and they said there isn’t much data to support “starving the cancer” but it could be an option as well. They said her caloric intake should be around 1300 calories a day and suggested some dog food brands for her.

The only real good news was that Lady is now weighing in at 86 pounds!!! Before surgery she was a little under a 100, so she’s lost quite a bit of weight. They said 85 is about the standard. It was funny, when I first asked her weight they said they didn’t know what she was today yet but that she was a little overweight and 85 pounds would be ideal. They called later to say that she weighed 86 pounds so I think Lady deserves an apology! Overweight was a harsh word to throw around without the facts! She’s darn near perfect 😉

Anyway, in terms of prognosis, the vet said it’s hard to say for sure but this cancer is terminal and it’s more about quality of life at this point. We got the okay to start taking her on some small walks and a bit more activity. I also asked about the staples hurting her because of the heat, and they said that because she has a darker fur, that likely wouldn’t be the case. I know when my mom had staples in her head, they would burn if they were exposed to the sun for too long, so it’s something I have been keeping in mind when Lady is outside. It was reassuring to know that likely isn’t causing Lady much discomfort. Hopefully by next week her incision will be all healed and we will finally get those staples out.

I hope everyone has a safe & fun holiday weekend! Give your dogs & cats an extra hug for me! They are the best among us!

kazann said
I have cats and have been told to NOT feed chocolate or grapes to dogs.

Yep, all true. Nancy, nix the grapes. Try popcorn instead!

WOW! Lady’s weight loss story is such a big success! Oh my gosh you should both be VERY proud of that! May I send you some questions over? I’d like to share her story in a Triapwds Nutrition blog post. This is wonderful!

I’m sorry those staples are still in but yeah, let that incision continue healing and keep it safe. She will get there.

And the cancer status…ugh. Yes, quality of life is #1, always, but especially when we’re talking about this disease. Did your vet refer you to an oncologist for more info about whether or not chemo may help?

That’s awesome that your vet had such a good conversation with you about her diet. A round of applawse to you for asking great questions! You are such a good mom to Lady.

Yea, I didn’t know that about grapes, but they just split one.  However, strawberries are an excellent source of vitamin C.

I do know when having cancer you want to stay away from sugar and carbs as much as possible.  Cancer feeds on surgar.  You want to feed a high protein diet.