We are so happy to bring you the results of the 2020 Amputee Dogs Quality of Life Survey! Exactly 198 dog parents gave us a look into the lives of their amazing Tripawd canines, and this is what they had to say about life on three legs.

As we mentioned last week in our Tripawd Cats Quality of Life Survey results, 2014 was the last time we asked the Tripawds community about their post-amputation experience. This information is so helpful for people who are new to the idea of amputation for their pet. A big THANK YOU to everyone for participating and sharing such heartfelt, thoughtful comments about your journeys.

The survey questions you’ll see below are based on the very first Amputee Pets Quality of Life Survey published by Dutch researchers in 1999. Let’s get right to what you want to know: here’s what 2020 canine Tripawds members had to say about life on three legs.

Why Do Dogs Lose Legs?

Dogs loose legs for two big reasons, cancer and accidents, just as most cats do. But some canines also lose limbs because of failed orthopedic surgeries or congenital malformations, things that cats in our community rarely contend with. 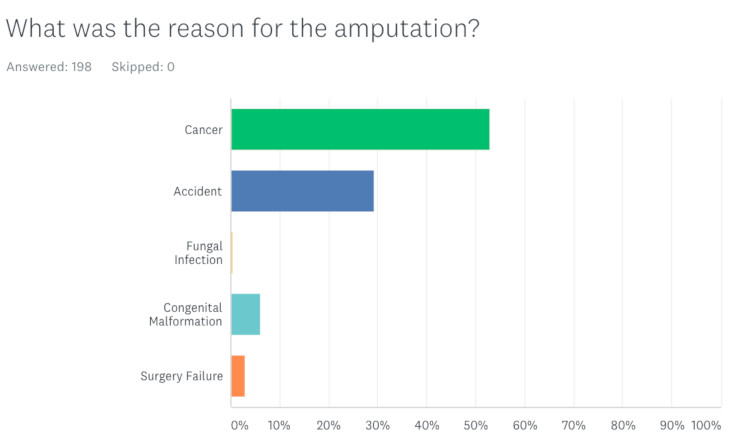 What Size are Most Amputee Dogs?

Modern-thinking veterinarians say that neither size nor age should exclude a dog from being an amputation candidate. The average Tripawd isn’t small, but rather somewhere between 50 lbs (22.67 kg) and 90 lbs (40.82 kg). 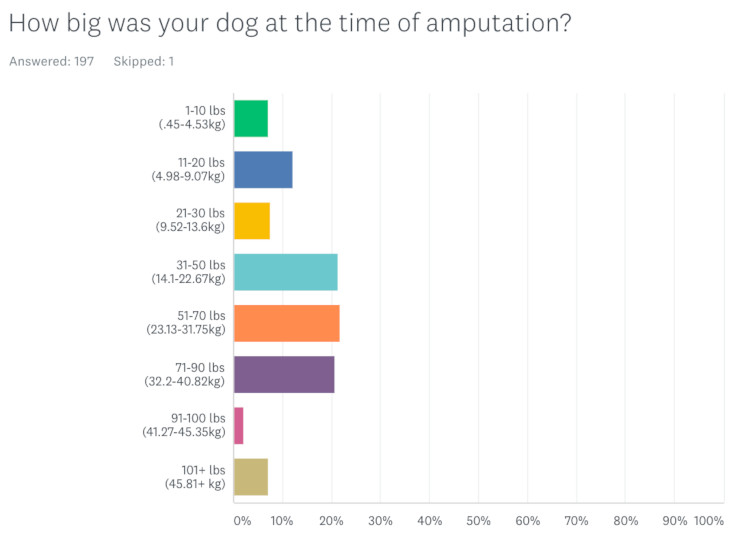 Do People with Senior Dogs Amputate?

Sadly, most dogs are in the prime of their life when they join our club. 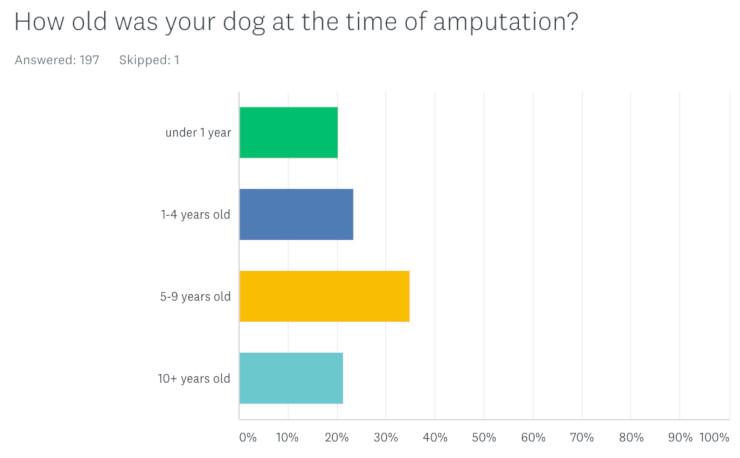 How Many Front Leg versus Hind Leg Amputee Dogs?

No, it’s not your imagination, you are seeing more front limb amputee dogs in our community than rear leg amputees. This is unlike cats, who tend to lose a rear leg most of the time.

Were You Opposed to Amputation?

When presented with the idea of amputation, the results here show that canine pet parents feel exactly the same way that cat parents do: it’s not fun or easy to accept at first, but if it means their pet can live a pain-free life then why not?

I mourned the loss of his leg more than he did. Once the surgery was over, though, I was just grateful for extra time with him.

I thought it was too extreme and it might not buy enough time to justify the very high cost. I was worried about my ability to care for a three-legged dog. I worried about my dog’s quality of life and her happiness.

I was not opposed, but I did experience a lot of guilt and apprehension. Reading and researching about other three-legged dogs helped me be more confident in the decision to amputate.

Yes, I was very hesitant due to Eddie’s age to amputate. He was 15.5 at time of surgery and I was very reluctant to put him through such a life change.

Approximately how long did it take for your dog to adapt to limb loss? 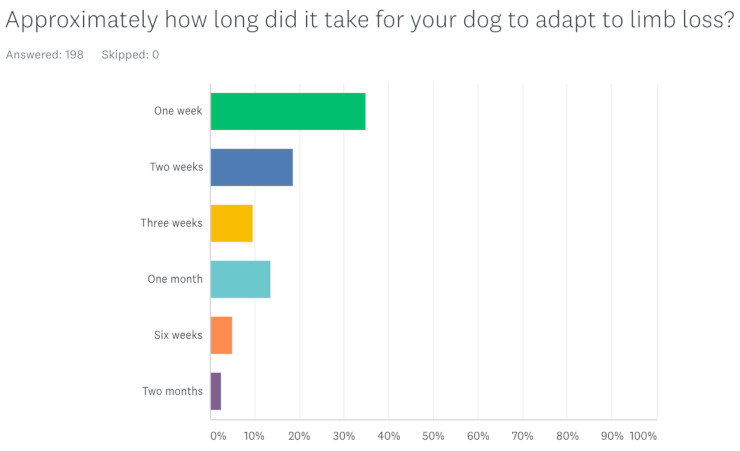 How would you describe your dog’s adaptation to limb loss?

After the hard work of recovery is over, all but one Tripawd parent felt like their dog adapted really well to life on three legs. 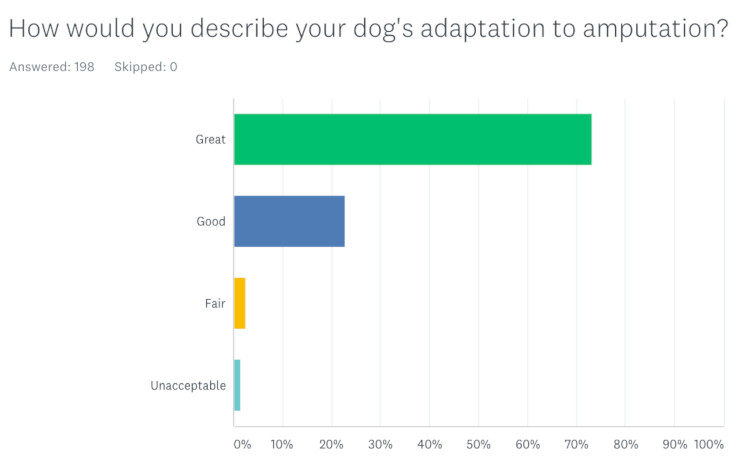 Acer has adapted incredibly well. He’s the same happy, silly mutt as before. We rarely even notice and we know he doesn’t!

It was definitely an adjustment for him. He struggled with depression for a few months and has ptsd whenever he is near a road or a car drives by. He was hit by a car.

He did so amazingly!! It was way harder on me to deal with.

He did great at first but he’s been struggling over the past two months. His back leg seems injured. He’s now going to PT, which so far has not helped.

Gracie has had a good transition. However she is more brave and more hesitant at the same time. Her small range of motion is difficult for her. Gracie takes a long time to maneuver herself in finite movement. But she also chooses difficult paths. Always getting herself on unstable gravel to pee and poop. I think it’s her personal workout.

Did your dog show any behavior changes after limb loss?

Most pet parents say their dogs didn’t show any significant behavior changes after surgery. Those who do tended to share feedback that was more about the dog’s physical changes (such as lack of stamina) rather than behaviorial (such as lack of confidence).

Once she recovered from the amputation she was happier, more sociable, and had more energy because the source of her chronic pain (osteosarcoma of the distal radius) was removed. She returned to her old self, which we hadn’t seen in a long time!

He became depressed for a period time.

She was a little more attached to us. She wanted us for the first few months to go out with her at night to go to the bathroom and she was always in the room with one of us rather than wondering out on her own. As she got stronger and some PT she returned fully back to normal and is more than happy to sit on her chair on the patio well after dark just like always.

He was happier and more playful and puppy-like. It was great to see how much relief it gave him from the pain.

After he was off pain medications he was very insecure. Most of it is gone now at 22 months after amputation.

She bounced back like someone had watered a flower. Her spirit came back and she lost some of the grey in her face and she seemed younger without the pain she’d been experiencing

Did you expect your dog to adapt to limb loss in a shorter or longer period of time? Or did it happen in the timeframe you expected?

Most dogs take about two weeks to get their sparkle back, but most people felt their dog took longer to recover than they anticipated. 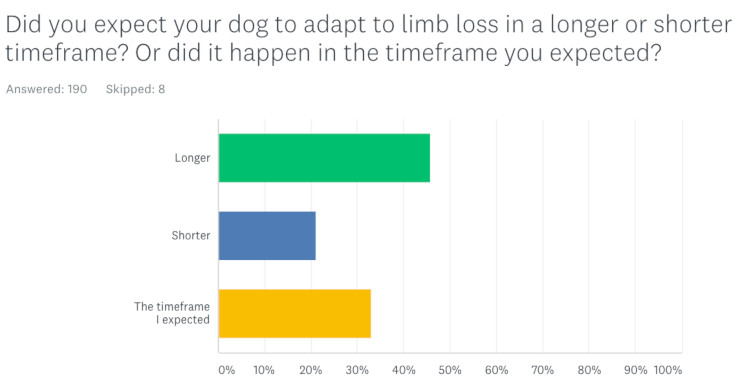 Now here’s the question you’ve all been waiting for:

Would You Say Yes to Amputation Again?

Despite the occasionally recovery challenges, almost every single person who answered our Amputee Dogs Quality of Life Survey said yes, they would amputate again if faced with the situation. Of the three that said “No,” one Tripawd was 2.5 months out of surgery and struggling, one was a little unclear as to why they would not and the last person wished they would have tried canine rehabilitation therapy for their injured dog before jumping to amputation.

Absolutely. I learned early in life that animals are highly adaptable. The pain they feel in the limb hinders their quality of life and they can easily adapt to the change. I think it’s harder for us humans but there are many resources and a wonderful supportive community of Tripawd parents out there. I would have no problem with adopting more of them down the road.

She has not recovered the way I expected, but doing the amputation did save us from having an emergency situation due to bone fracture.

It gave us 4 more months with her. I felt if she was able to live comfortably for 3+ months post-op, I would feel it was worth the pain and adjustments to the 3-legged life.

Without a doubt. She had a rough recovery due to some complications but she is doing great now, over a year later. We are very pleased with her recovery and how she had adapted.

10/10 I would amputate again – when facing the leg or life decision I would always choose life . . . A pain free life. . . Animals are amazing and they adapt to all sorts of situations . We have a saying in vet med. . 3 + a spare 🙂

Humans have a much harder time than dogs do with the amputation! We were told he would have about 6 months of life after the amputation – we are at 3 years and 6 months!

It has been four months and my girl is doing really well. I wish she could get around better (she has an old injury in remaining back leg) but she is happy and I am thrilled to have more time with her.

At 18, people thought I was crazy for doing this operation. One year later I saw her surgeon and showed him a video of her running after the ball. He said “that’s why we did the surgery on an 18 year old dog”. Tara’s birthday is in one month, she will be 20! She is the happiest dog I have ever seen. Being so old, of course she has some pain from her arthritis, but it doesn’t stop her from enjoying life.

I absolutely would make the choice to amputate again. No pet owner wants to have to make that decision, but my dog has adapted so well. The minor changes in her behavior do not impact her overall quality of life. A family member commented that amputation was an “extreme” choice, but for me it was the only choice. My dog was in pain, but she had so much more life to live. I am thankful I was able to take her pain away, and I am thankful for each additional day I get to spend with her.

Yes! Yes! Yes! A thousand times yes. We would do it over again.

While our lifestyle has changed and he can’t run as far, he is still happy to play outside and walk in the woods at his own pace. I don’t feel that he has a decreased quality of life in any way, things have just changed. And he inspires me every day!

Well, there you have it, the 2020 Amputee Dogs Quality of Life Survey! We encourage you to download the .xls spreadsheet to read the thoughtful and interesting answers people left about their individual experiences.