The 2020 Amputee Cats Quality of Life survey results are in! A big thanks to our feline Tripawds members who participated. We received 35 surveys from cat parents and today, we’ll spotlight what they had to say about life on three legs.

The last time we asked the Tripawds community about their post-amputation experience was in 2014. We are so glad we asked again! It’s always an honor to glimpse into the lives of our three-legged members.

Our survey questions are always based on the very first Amputee Pets Quality of Life Survey published by Dutch researchers in 1999. Twenty one years after that original survey, and six years after our community’s last Tripawds Quality of Life survey, here’s what 2020 feline Tripawds members had to say about how their cat adapted to amputation.

Why Do Cats Lose Legs?

Unlike our canine friends, it appears that cats loose legs for two big reasons: cancer and accidents. Some say their cat showed up at an animal shelter with a broken limb, and one person said their cat was caught in a car engine. Yikes! Only one person specified the type of cancer their cat had, which wasn’t a surprise: a feline injection site sarcoma.

What Size are Most Amputee Cats?

Unlike dog parents, cat parents typically don’t hesitate to amputate when a cat is unusually large. But most people said their cat was under 10 pounds (4.5 kg) at the time of amputation. 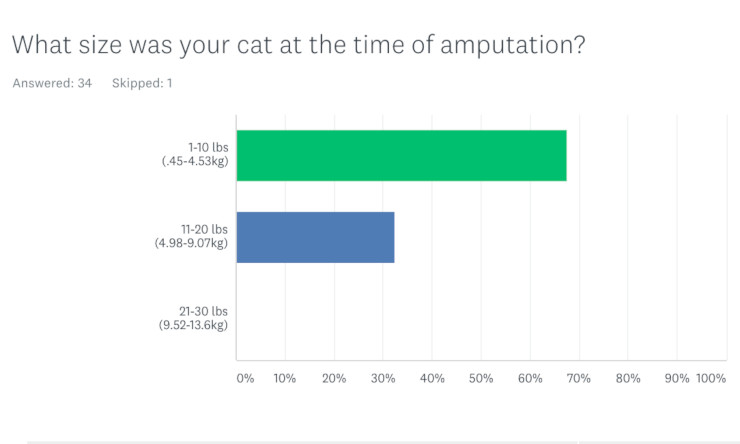 Do People with Senior Cats Amputate?

Like dogs, cats typically lose limbs in mid-life. A few senior cats did too. 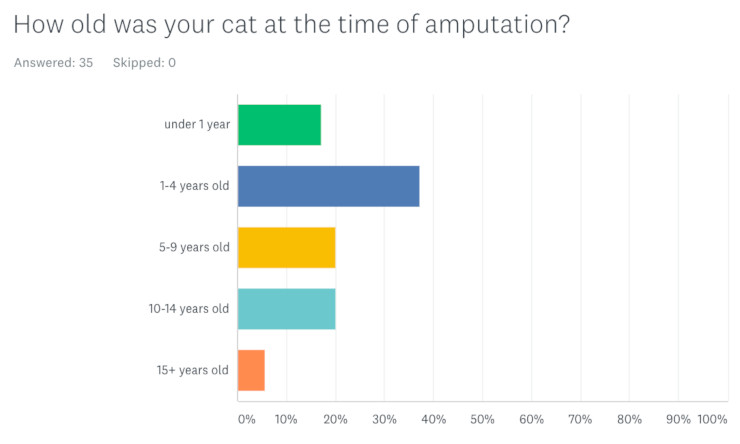 How Many Front Leg and Hind Leg Amputee Cats?

It appears that a large percentage of cats lose rear legs. This may be in part because of the large number of feline injection site sarcoma diagnoses.

Were You Opposed to Amputation?

Nobody wants to amputate, but when the alternative is unthinkable, most of us give the go-ahead, even though it’s painful for us to say yes.

I kind of knew it was coming when I found the lump. It was harder for my husband to accept so I had to present the science (including stories on your site) to convince him without pressuring him.

We only had 2 options, amputation or euthanasia. We just wanted to save his life. We were horrified at the idea of having an amputee that was totally feral, but we did not want to put a young cat to sleep.

I was not opposed but I was extremely worried. Our surgeon was very thorough in explaining our options. He said pins, surgeries, and a cast would be far harder on our cat than a full amputation.

Wanted to do everything I could to ensure there was no other option. Once I knew there wasn’t, went ahead with the feeling it was the best I could do for her.

When the doctor told us the cancer was contained to the leg at the time, we were OK with moving ahead.

The amputation was done shortly before we met and adopted our cat, so we had no say in the situation, but we were concerned about what it would mean for both us and our cat for her to be missing a limb.

Approximately how long did it take for your cat to adapt to limb loss?

Recovery time is a big concern of pet parents. For those with cats, rest assured that most people say it only took about a week for their cat to adapt. A complete recovery, however, sometimes takes time. A few cats experienced difficulties like ongoing pain, which is why it’s so important to find a veterinarian experienced with modern pet pain management. 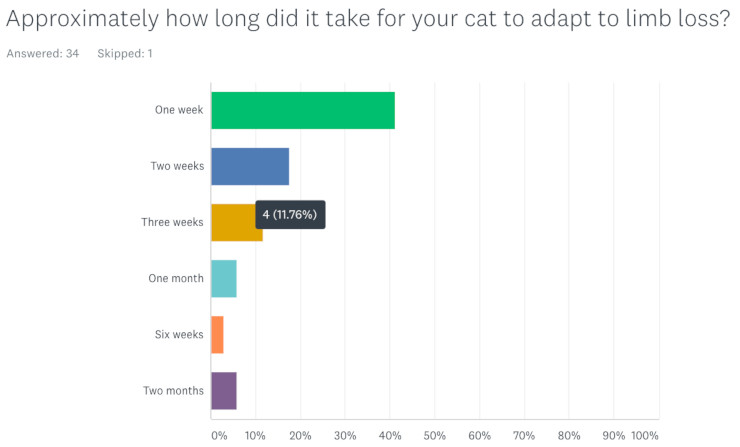 How would you describe your cat’s adaptation to limb loss?

Ssssh. Don’t tell cats, but they tend to adapt to amputation faster than dogs! Although one person commented that it “Took longer than average for his personality to come right,” the majority of people say their cat easily bounced back. 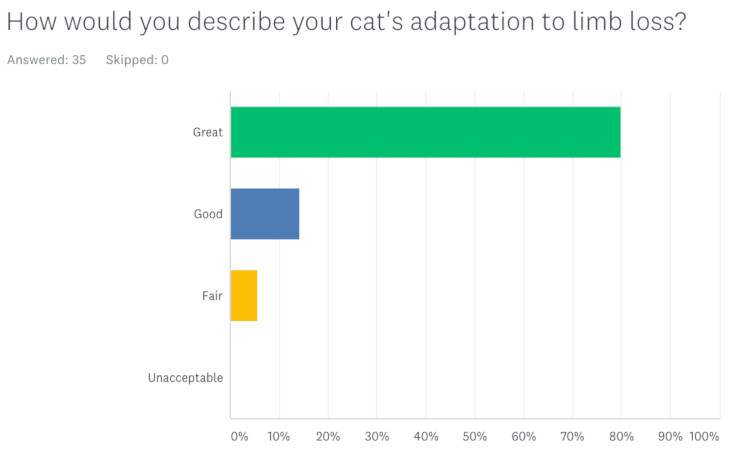 Did your cat show any behavior changes after limb loss?

Based on the stories you’ll read about below, it seems that some cats tend to have some interesting behavior changes after amputation that play out in different ways.

Did you expect your cat to adapt to limb loss in a shorter or longer period of time? Or did it happen in the timeframe you expected?

This one is interesting. It’s almost a 3-way split between Tripawd cat parents recovery timeframe expectations.

and finally, Tripawd cat parents answered the biggest question of all:

Would You Say Yes to Amputation Again?

Here’s the heart of our amputee pets survey. Despite the occasionally recovery challenges and ups and downs, every single person who answered our Amputee Cats Quality of Life Survey said yes, they would do it again.

Yes I would, because I was amazed at how quickly he adapted to life as a tripawd and how well he recovered. I was scared at first and my spouse and I thought we would be sad everytime we looked at him, but its actually the opposite. My cat is still full of energy, jumps, runs (very fast!) and plays as if he never had surgery. I also did some research before making a decision on whether or not to amputate (or having the surgery to try and fix the broken bones, where the recovery time was extremely long and might have been painful/risk of infection, etc.) I don’t regret my decision at all.

Yes! To eliminate the pain of her front limb osteosarcoma so she can have a peaceful life.

Yes! This was a traumatic injury.

Yes! It saved her life and didn’t change anything about her personality. She was 17 when she had the amputation. She’s 20 now and going strong.

Yes! After four long months of anguish and uncertainties he has recovered well and is even playing and runs after his ball. I also rely on him for support especially now during this Coronavirus pandemic, because of him I’m able to laugh.

Yes! It’s been a rough year but she’s doing great and has shown incredible resilience. Sadie is my hero! My husband also agrees that it was absolutely the right thing to do.

Yes! It saved her life. It would have killed me to put her down because of a broken leg.

Yes! Huckleberry is one of the sweetest, most loving cats that you could ever meet. Domestication took a lot of love and hard work, but it proved time and time again to be a worthwhile venture. I am so glad that we took the chance with him, he is a wonderful companion and he could care less that he has only three legs. It does not hinder him at all.

Yes! Even though it took a long time, he is still the happiest cat he was before it just takes time. I know now not to listen to average recovery times as not all cats are the same. My cat took longer than average but at least he came right and is now doing amazing as ever!

Yes! She’s her happy self. With what we were given, it’s all I could hope for.

Yes! It made his quality of life so much better. Without the amputation, we would have been discussing end of life. We were able to give him almost 3 more years before cancer came back.

That’s it for the 2020 Amputee Cats Quality of Life Survey!

Watch for next week’s article that reveals Amputee Dogs Quality of Life Survey results, and in the meantime if you’re a feline pet parent, be sure to stop by Tripawds 3 Legged Cats Discussion Forum to say hello!

What Is The KillBarney Tour?

Get the KillBarney Tour Book for photos and stories of Tripawds members around the globe!