Morgana has finished her cycle of Chemotherapy today at the Tierpital in Zurich. She's a five-year-old labrador, we discovered osteosarcoma in hee rear left limb at the beginning of March, she was amputated on March 24th and received 4 doses of chemotherapy with carboplatin.

Today we spoke with the doctor at the end of the session, as we wanted to understand what's next. We must say that Morgana has really done well. In the last couple of weeks, she has been running and jumping all over, and from the distance, you would not even think she's amputated. She's not had any side effects of the chemo, her fur is fully grown back, and last month, as we did the thoracic radiographs, there were no signs of lung metastasis.

However, today the doctor brought us back to the reality of this hideous disease. She mentioned that, because of her young age (she became 5 years old end of April), we can expect the tumour to be more aggressive. Which is why they have recommended "metronomic chemotherapy " to prevent metastasis. She was open in admitting that research does not yet confirm the validity of this protocol.

So, questions to those that already went through this:

1) Who knows Metronomic Chemotherapy? Has somebody already used it as preventive care? I'm particularly puzzled by the fact that Thalidomide is part of the therapy (together with cyclophosphamide and onsior), end the side effects it could have.

2) Are there any other alternatives? We have started, together with the chemotherapy, the usage of the K9 Immunity Plus together with MDM (although it is very complex to get them to Europe).

Looking at her today, we definitely do not regret the choice of amputation. But we want to explore the best options for the future...

Here below a recent shot from her. 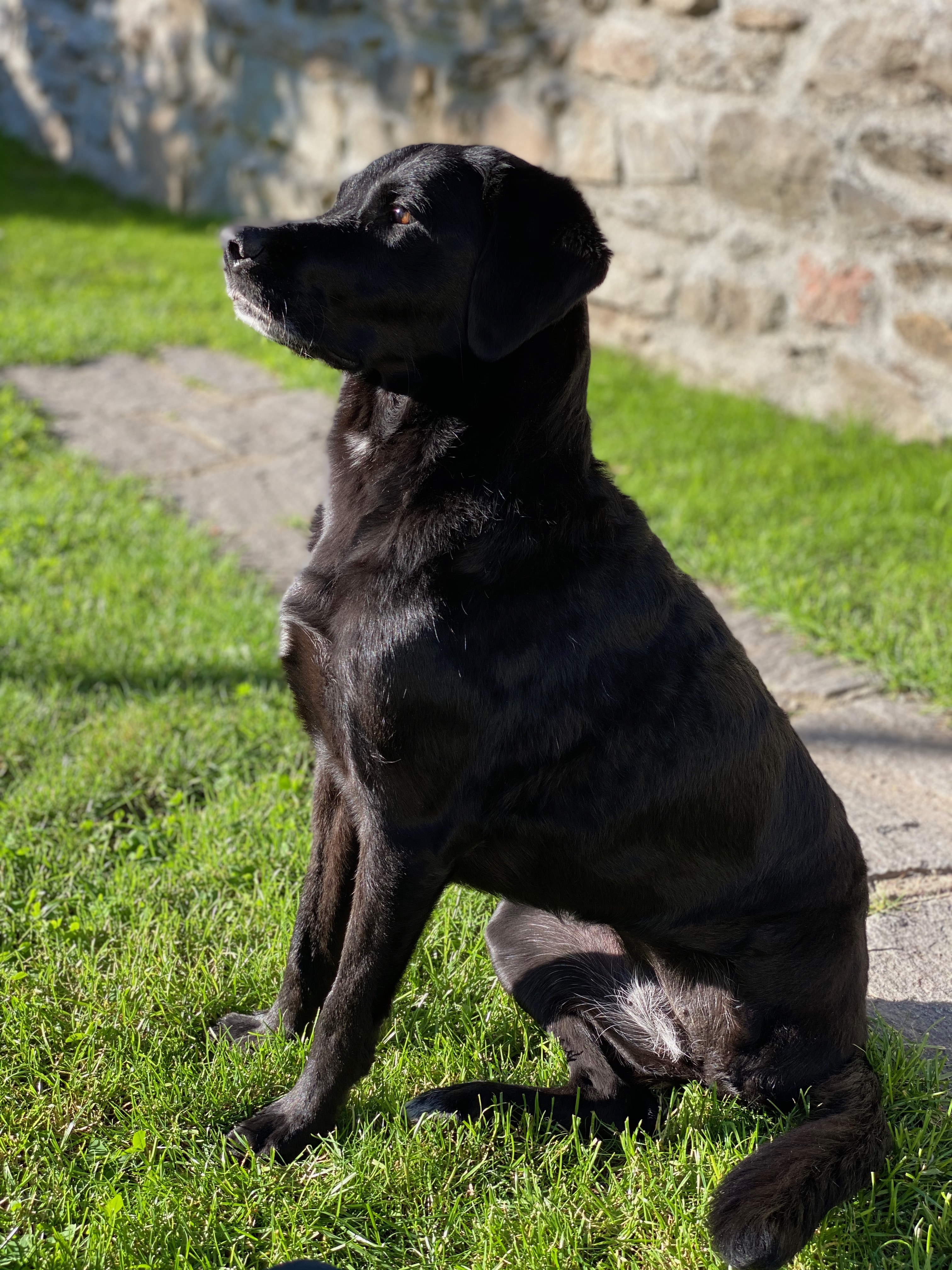 Sergio it's sooo good to hear from you! This is terrific news about beautiful Morgana!

She is such a strong, resilient doggie! Give her lots of lovin' from us OK?

1) Who knows Metronomic Chemotherapy? Has somebody already used it as preventive care? I’m particularly puzzled by the fact that Thalidomide is part of the therapy (together with cyclophosphamide and onsior), end the side effects it could have.

You'll see that yep, we have lots of members who have used metronomic chemotherapy and the link will take you to a long Forum topic that lists everything we've learned about it. We used it for our Jerry when we discovered he had lung mets and we believe it helped give him an extra quality of life for about 8 months. Most people do use it as a preventive against mets. However, newer thinking among vet oncologists is exactly what your vet mentioned: the jury is still out on its effectiveness and some oncologists are not recommending it except as a last-ditch effort when mets are discovered. You can see our interview about metronomics with Dr. Seguin from Colorado State University.

2) Are there any other alternatives? We have started, together with the chemotherapy, the usage of the K9 Immunity Plus together with MDM (although it is very complex to get them to Europe).

The new immunotherapy vaccines are offering a lot of hope as a preventive against disease progression. I'm not sure about availability where you are but here is some information you can research:

Unfortunately, historically the disease is more aggressive in younger dogs. However, we have seen many dogs like Dexter (see the Immunotherapy link) and Bart the Vizsla defy those odds over and over again, and go on to live out their normal life expectancies. So although there is no way anyone can say Morgana will too, stay strong and hold out hope that she will be just as fortunate. And with all that you are doing to help her beat those odds, and a dash of Tripawd Power, she very well may!

Let us know what you decide to do, we are always looking at how other members treat their pet's cancers and learning from one another in places all over the world.

Ypir Morgana  is a beauty!!  And it's delightful  to jear how well she is doing and enjoying being  Morgana!

Around here, "reality" is what's true for each individual  dog.  And I'm  not sayi g that lightly.   It's just as Jerry said, many dogs here beat "statistics ".  They define their own path.

THE most import thing is to make every moment count!!  Live in the NOW with no worries about the tomorrows...just like Morgana!!

Some continue  other therapies after their rounds of chemo, some don't.   Others will chim in.  No right or wrong evvvver!  What whatever  decision  you make out of love is the best decision!

Thank you both for the useful information.

We have enquired with several oncologists here in Europe, and at the end they all agree that, considering the young age of Morgana, is worth trying. The only danger would be side effect, for which we should know pretty soon in case...

This week will be 100 days from amputation. With summer heat coming up, we’re constantly checking her breath. We’ve however decided to still go on vacation to Sardinia on the beach, as she loves swimming.

What a stunning girl Morgana is! Great to hear she's doing fine and no signs of lung mets!

My boy Razbeg has been on metronomics for about a year now, so I thought I might share our experiences on subject. Razbeg already had one small lung met before chemo, although at the time we didn't know for sure what it was, because it didn't grow at first. After 4 rounds of carboplatin Razbeg switched to cyclophosphamide last June. Razbeg is about 26kg and he got a capsule of 12,5mg each day. You probably have heard about the side effects of cyclophosphamide, one being haemorrhagic cystitis. To prevent this, Razbeg had diuretics as well. Everything went well for about nine months, but this March, despite of all precautions, Razbeg got the cystitis, and we are still struggling with it, although now the symptoms are almost gone. Usually cystitis heals more easily, though, once giving cyclophosphamide has been stopped. Besides, statistically the risk of getting it is quite small. When we started using cyclophosphamide, the small met in Razbeg's lung started to grow for the first time (before that there was hope it wouldn't be anything serious), and then another small spot appeared. His lung mets have been growing really slowly, however, and they don't cause any symptoms.

Now Razbeg's having chlorambucil (Leukeran). He gets 4mg daily, except only 2mg every third day. Leukeran is quite new thing to us, so I can't yet say if it's been beneficial or not. We haven't been able to check his lungs for 4 months now, because we have been concentrating on curing his cystitis, and also corona virus has messed thing up, because Razbeg finds taking x-rays stressful and at the moment I can't accompany him to the procedure. He's doing well, though, no visible signs of having anything wrong with his lungs. Generally speaking chlorambucil seems to have fewer side effects than cyclophosphamide, but cyclophosphamide has more scientific data behind it. And of course, leukeran is not entirely without side effects, either, for it can cause bone marrow suppression.

As others have said, there's no right or wrong, and different things work for different dogs. Some onclogists indeed seem to think that metronomics aren't that useful that they once were hoped to be, and I don't know whether cyclophosphamide and chlorambucil have helped Razbeg, but I want to know I have done everything possible to help him, and now, after a year of being on metronomics , he's still doing fine. At the moment, metronomics are the only option we have after chemo. We are fellow Europeans (living in Finland), and unfortunately immunotherapy vaccines are not available here. I don't think they're available anywhere in Europe, although I cannot be entirely sure.

These were some of my thoughts. To sum up, I think metronomics are worth trying, although they might have side effects and their effectiveness is disputed. I hope you all the best whatever you choose to do, and have a lovely vacation in Sardinia

He and his adopted "brother" Myrsky have their own facebook page:Razbeg & Myrsky

You are so welcome sirjoe! We look forward to seeing your vacation pics. Be sure to share them when you get a chance 🙂