Started a new thread since we're home now and the real fun begins...

Went to pick him up with David this evening... Everyone amazed at how he bounced back so quickly.. Literally! They have him in some special doggie compression tshirt with the arm sewed shut. I haven't seen the incision yet.

He was bouncing off the walls like his usual self (trust me, it's not the drugs, it's just his personality). The only real instruction I got was to not let him fall on his incision. We leave the office and he wants to pee on the nearest tree.. And proceeds to take his first nosedive. He figured it out and leaned against the tree so he could pee on it. In the car before I was able to get in behind him, he tumbled again trying to jump up front. We couldn't help it, we giggled... What bad parents!

The hour ride home he was happy with kisses and tail wags and once we got home and the rest of the pack checked him out, he was sitting in the kitchen in his dinner spot. Gobbled up dinner and a bunch of water right away! Yippee!

I was changing from my work clothes and David was on the phone and all I heard was David say "no no no no no!" So of course I came running. He decided the nice new orthopedic bed wasn't good enough, he was going to jump onto the couch!

Then he crashed. He's out like a Light. Some heavy sighing and whimpers from time to time, but just resting somewhat comfortable next to me on the couch right now.

Crossing my fingers that this keeps up, but I am prepared for a "crash" should it happen. Thanks everyone! 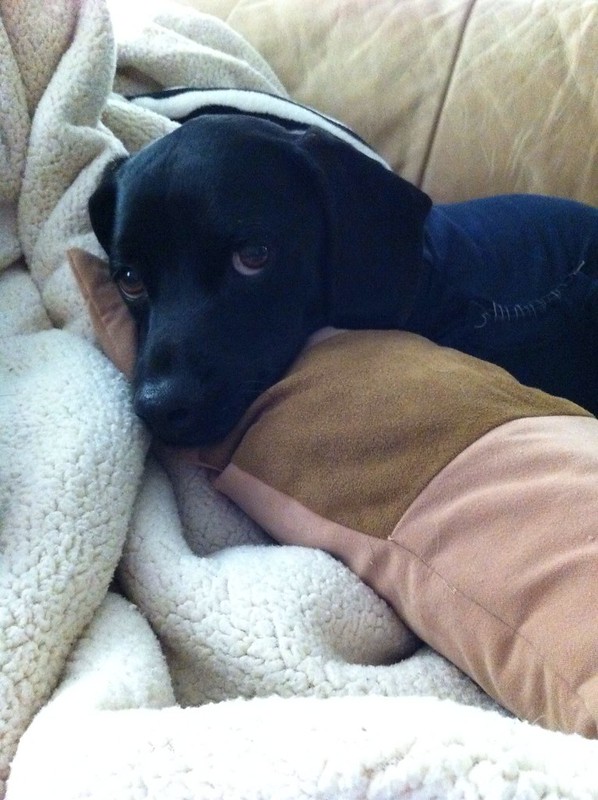 Look at those eyes. He sounds like a spunky little guy! Good for him that he's already eating good and it sounds like he's learning quickly how to get around on three legs.

I will always love you, Athena.

I wanna come snuggle with him NOW!

We're all coming over to snuggle with him----THOSE EYES!!!! So happy things are going so well:)

So glad your boy is home and on the road to recovery!  Be sure to tell him to get lots of rest in the next few days!!

Thanks, once we got him settled he hasn't moved since! I knew he'd be like this, happy and normal at the vet, then once we're home he lets his guard down and rests/shows pain symptoms. He was the same way after the lump removal.

Only thing freaking me out is a wet cough. I read in my discharge papers that he got oral anesthetic and this is normal for up to 48 hours. Still scares the crap outta me every time he coughs though. Never had a dog with kennel cough, but I imagine this is what it sounds like.

Air mattress set up in the living room, we're ready for the next few days/nights to lay low!

Barrett is going to be a super star! It's amazing how great he is already doing. Will keep sending pawsitive thoughts your way!

WELCOME HOME BARRET! A big relief for mom and dad! We knew you could do it!

Major, major surgery nd t will be painful for awhile without question!! Yeah, the coughing is definitely normal sometimes after that type of anesthesia. Should dissipate before long.

We are all in love with that photo. It just beckons you to come over and ave a pajama party with him!as

Great that he's eating, peeing and DRI king!! Great!! Slow yourself down a little bit though Barret, you don't want to rip out any stitches and flip your mom out!

Throw I g red balls up in the airr for you Barret!

Holy Toledo, just went out for last potty before I go to bed... Or to my flattening air mattress.. And we already had our first poop! A little one, but he had no trouble at all! Even wanted to run up the steps after. Momma said no way.

Keeping him inactive is going to the challenge for sure!

Glad he's home and doing well. It's amazing he has so much energy given what he's been through. Such a resilient little guy!  Sending hugs and healing licks your way!

I'm glad to hear his homecoming is going well. Sorry I missed you in the chat last night. What kind of compression shirt is that? I'd love to find out.

3-Paws up to you and Barret (and an extra one for his potty dance!). Keep us posted. 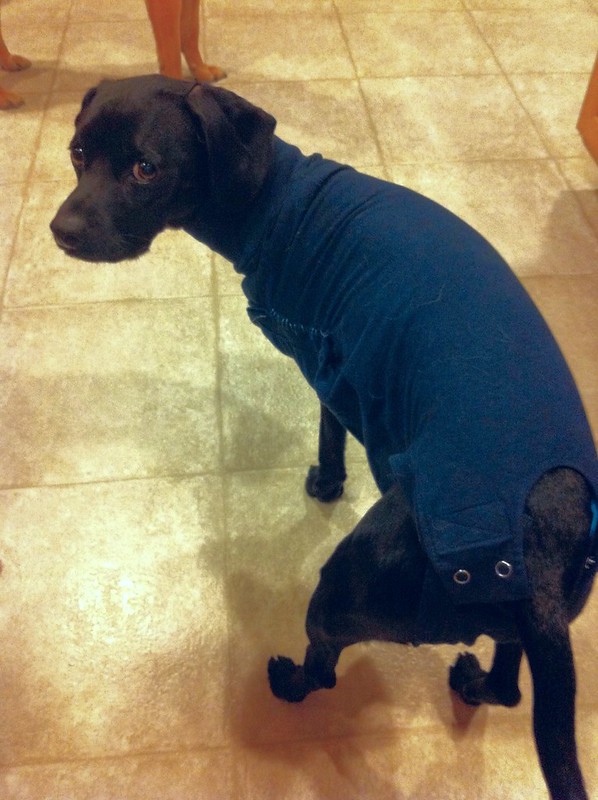 It's called a medical pet shirt (medicalpetshirts.com). It isn't as tight as the compression wrap he had after his last surgery, but it is snug. It has snaps like a onesie

we have to unsnap to potty though. When we're done with it I might cut out pee and poo holes and keep it for winter, it looks warm!

My iPad isn't cooperating, so I'm going to restart and try posting about last night again in a minute.

Barret, you are SO cute. I'm happy to hear that you're home and recovering so well!

Awww...what a cute little guy! Glad he is doing well

"Let us think the unthinkable, let us do the undoable, let us prepare to grapple with the ineffable itself, and see if we may not eff it after all."
-Douglas Adams, Dirk Gently's Holistic Detective Agency

"May I recommend serenity to you? A life that is burdened with expectations is a heavy life. Its fruit is sorrow and disappointment. Learn to be one with the joy of the moment."
-Douglas Adams, The Long Dark Tea-Time of the Soul