Griffin received the second dose of his Yale canine cancer trial vaccine a few days ago.  We will return to AMC for an appointment with Griffin’s oncology team on September 26th after a break of 6 weeks – the longest we have gone with no major medical appointment since his diagnosis!  Griffin will have chest x-rays taken on that day to determine if the vaccine and/or Palladia is having a positive impact on the lung mets previously identified and determine our next course of action.

In my last update I shared that after racking my brain for what could turn Griffin off so completely to his regular food, I made the connection that I was giving his chemo meds with his afternoon meals, so if he was experiencing nausea from the Palladia, he was likely connecting his old foods with that unpleasantness – smart boy!  I switched him to a new kibble and wet food to test my theory, and he mostly rebounded with regular eating.  We had an extended visit with my godchildren in Pennsylvania, so he was spoiled with lots of human food during this time!  After returning home a few days ago, Griffin no longer seemed enamored with the new canned food that he eagerly ate while out of town, so we are back to the drawing board.  I have a few varieties of canned food, and hopefully we will hit on one he likes consistently.  I’ve also done a bit of research for new kibble (he’s eaten Taste of the Wild his entire life and I’m a bit sad that we need to find a new brand!) and ordered small bags of 3 varieties so that we can find a keeper that meets my quality requirements and his gastrointestinal preferences.  And finally, I ordered CBD oil from Ellevet, which will hopefully address his lack of consistent appetite and any nausea he may be experiencing.

Thankfully, Griffin’s weight has remained stable during this time (a difference of -0.4 lbs. in the 3 weeks between his vaccine doses), and he remains in good spirits and active.  I am really not accustomed to worrying about Griffin’s eating habits and I really hope we solve this issue soon!

In addition to having a blast with my four godchildren (ages 3, 9, 10, and 17) and mastering walking down uncarpeted wood stairs unassisted multiple times a day, Griffin also got a fabulous haircut at Bow Wow Bliss.  We have groomers in 4 different locations outside of NYC, all of which are amazing and so much less expensive! 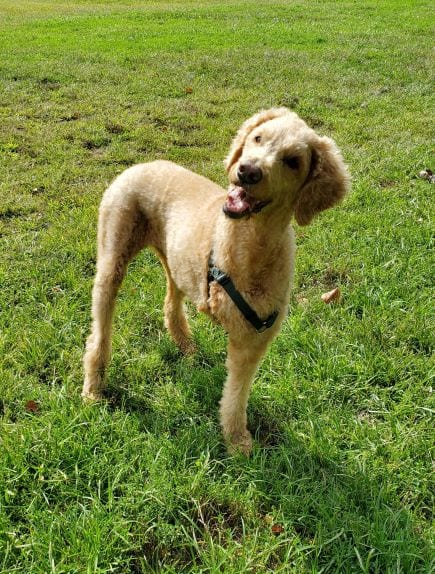 Our return to NYC coincided with the arrival of autumn.  Griffin enjoys the cooler weather, but I was not ready to wear a jacket on our walk this morning!  😏  It’s been a while since I’ve posted a Griffin fetch video, so enjoy this one and make sure the volume is turned all the way up to hear him gently snoring while snoozing away the afternoon after our long morning walk today!

He looks great! He is down for the count after all that exercise and playing ball, how adorable

Will be keeping fingers crossed that his visit is a good one.

We have not tried Taste of the Wild. Bo really likes his Crave food, which seems to be a decent food nutrition wise and it is also economical. After being introduced to so many foods (for good reasons), Griffin may just have become picky. I have seen several pups, especially after getting that good table food, get picky about their dog food. You may wind up having to switch foods up now and then, I know how frustrating that can be.

I am glad you had a good visit with the godchildren! I am missing my grandkids big time right now, have not seen them since Christmas. Fall has hit Kentucky too! The leaves are falling, pool is about to get closed up, and temps are getting quite brisk in the morning.

So good to hear from you, thank you for sharing the videos. They always make me smile

Awww, he looks hoppy as ever to get out and go on all his adventures, lucky pup. Griffin plays hard and sleeps hard, just the way it should be.

What are the other foods you’ve tried? Our Wyatt was on ToW for a long time, until Wild Earth came out. He’s digging that one, you may want to give it a try if the current batch of foods don’t work (though I hope at least one does!).

I can’t believe you’re feeling autumn over there. We are far from it out here on the west coast!

Not sure you could ever look anymore handsome than you already do! But that haircut adds an extra level of debonair!!!

Doing stairs, playing with all your hooman extended  family, fetching, snoring like a Champ and eating hooman food……heck yeah, Griffin is living  the dream!!!!

And your weight is holding steady.  I think that’s proof hooman food is good for you!!!😉     Pretty sure you’ve tried Honest Kitchen, Pet Fresh, etc.  I think you may just have to reconcile  yoi’ll have to become Chef Stacy and cook for both of you🤪

ALWAYS love getting updates on Griffin, especially  when it comes with poctures and videos!  He makes napping look like a beautiful  art😊

PS  And YAY for such a nice long stretch with no Vet visits!!