THIS IS UNBELIEVABLY THE BEST NEWS. Victory indeed! ridiculous resiliency and bravery and courage. this journey!

Oh my dog I'm thinking that Griffin made that accidental vaccine re-route happen just to see you smile! What a happy accident to not have to take that trip to get it done.

YAY that he's feeling good other than the food pickiness. Hopefully that will subside soon. Keep us posted!

Those photos are wonderful. I LOVE his new chariot! How did you get him in there with the canopy? Does it raise and lower?

I love watching all his energy and joy. Thank you for sharing.

Hi all!  Thanks for the good wishes and I'm glad that Griffin's videos makes people smile.  He can be such a goofball and people who we see on our daily morning walks get a kick out of his antics, too!

Rene - Griffin's new chariot has the same canopy set up as the old one.  The poles are clipped to the sides of the wagon frame and swing up when needed.  The canopy itself snugs over the poles in the 4 corners.  I keep the canopy folded under the cushion in the wagon when we are not using it. Unfortunately, Griffin cannot sit up with the canopy on, but we don't use it all that often for it to be an issue.  The canopy did a reasonably good job in the rain, but did start to leak once it was soaked through.  I ordered waterproofing spray, like you use on boots or a tent, which will hopefully make the canopy more useful in the rain.

Ohhhh OK, thanks for explaining about the canopy. Good job on getting the waterproofing spray onto the new fabric! Pretty nifty cover for rainy or hot days. I think our Wyatt would like the openness of it, as he doesn't like to be zipped into his dog stroller , like it makes him feel claustrophobic or something.

The openness of the wagon one reason why I was excited to find ones with push handles instead of having to go with a dog stroller .  I don't think Griffin would go for how closed in some of them are and other strollers are just open platforms which makes me uncomfortable from a safety viewpoint.  I remember you saying that Wyatt wouldn't stay in the open wagon, but after Griffin's jumping accident, it was easy enough to rig a car seat belt for dogs to serve as a tether.  Overall, Griffin and I been really happy with the choice of a wagon for our needs! 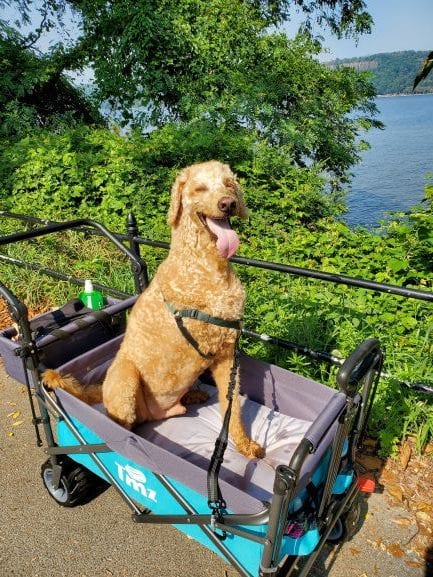 Oh goodness,  his smile is like a warm hug❤

Griffin really is just such a good, happy boy, and he always has been this way!  Throughout the entire process of diagnosis, treatment, and recovery, he has kept his equilibrium so much better than me.  And he is such a human magnet, even more so now that he amazes everyone with how well he navigates life on 3 legs.  I am so very lucky to be his mama!

Yeah that makes total sense. While Wyatt can definitely pop his head out of his stroller, that does't do him any good on a hot or rainy day. I'm digging the canopy!

Just checking into see how Griffin's appetite  is.

Sally - You have impeccable timing!

I've been racking my brain trying to figure out why Griffin seems off on eating lately.  He's been on palladia and piroxicam for 12 days now, with the food pickiness starting 4-5 days ago, so it could be a delayed reaction to the meds, but not likely.  There is nothing different in his home-cooked meals or supplements.  All of his supplements are mixed into the home-cooked meal and I give him his meds at the same time as that food, so while it is possible that there was a negative interaction with the supplements and meds, again, it's not likely as the reaction would have been quite delayed.  Before I started cooking for Griffin, he would get 1/3 can of wet food in the morning on top of (not mixed into) 2 cups of dry kibble.  He would usually eat the wet and then at some point later in the day (usually late afternoon), he would eat almost all of the dry.  I decided to go back to that routine today so I wasn't putting pressure on him to eat at a certain point in the day (I can't leave his home-cooked meals out indefinitely) and eliminated all treats to ensure that he wasn't filling up on "junk" food.  He ate the wet food this morning and then right as your post hit my inbox, he was polishing off almost all of the dry food!  It is much later in the day as compared to when he has been eating (6:45pm compared to around 3-4pm), but if that is what works for him, it works for me!  I plan to stick to this routine for a few days to give his digestive system a chance to reset, and then resume with the home-cooked meals and supplements.  I did notify his local vet and oncology team about the food pickiness, and neither seemed overly concerned.  I am grateful that he is being picky and not avoiding food altogether, so that is a plus.

On a separate note, he is definitely losing hair, which seems uncommon on Tripawds but which his oncologist warned about.  It's not crazy, but he doesn't usually shed, so seeing puffs of hair flying in the air after petting him and brushing out three times the amount of hair as usual is a bit unnerving.  Again, it is odd for him to have this side effect now when it has been 4 weeks since his last IV chemo treatment and hair loss is not a typical side effect of palladia.  I guess Griffin is really just forging his own path on this journey!  ~ Stacy

Oh Griffin!  You are a silly boy!  A  very very smart boy who knows how to tell your  Mom what you want and when you want it😎

Soooo glad he ate today and looking forward to it continuing!!👏👏  I understand  questioning  his weight loss though.  Good for staying on top of it.

When one of my dogs was taking Piroxicam, I added Sulfracate to help protect his tummy.  Can't  really recall of it was in conjunction  with not eating or not....guessing it was added because  of that.  Anyway, you can ask your Onco.

Interesting  about the shedding now, a month after the IV.  Others can maybe chime jn about Palladia if the hair loss was evident. I've  forgotten  who else is on  this regimen,  but they'll chime in too.

Agree completely about Griff9n forging his own path!  This boy does things HIS way.....and yes, it's working!  He just refuses  to "fit the mold" on this journey!  He's reminding  every that every dog is different!

Hi Stacy!  I just wanted you to know I continue to be amazed at Griffins charm and your love for each other.  You two are amazing and I love following up on Griffin's progress!  You always make me smile!

Glad you got him to eat. All of the supplements, meds to treat this are out of my realm of knowledge so I cannot help in that respect. While we were hauling soil yesterday afternoon, I saw a woman walking her pup, and he looked just like Griffin 🙂  I thought of you as soon as I saw him, he was a beautiful pup. I have never seen either of them in the neighborhood before.