What a great pupdate! Im so happy to hear that her first day home went so well! Rucca definitely rocks the nickname. Keep sparkling beautiful girl, you’ve got this. ❤🐾❤🐾

Day two is in the books and things are still going well. Today’s big milestone was very important for a Sheltie: the first bark (possibly a bit painful because the second bark that immediately followed was a bit on the yelpy side). We also did a bit of trolling in the kitchen after dinner to make sure nothing was dropped. We did stop her since we are trying to limit her activity to her potty walks but it is really wonderful to see her wanting to just go about her activities.

She also had her first small tumble this morning. While peeing, she tumbled forward and landed on her face but then immediately pushed herself back up and finished what she was doing. She did her other business last night and again this morning but didn’t go again today. We were warned that it might be several days before we saw anything so the fact that she’s gone twice is good but we she’s normally like clockwork so are assuming she is a little constipated.

I think the surgery drugs have fully left her system and she might be a little uncomfortable. She’s very cheerful though and she hides pain so well that it is hard to tell. She’s not whining or restless but her remaining shoulder muscle is tight and it takes her a few tries to get comfortable when she lies down.

She’s taken very well to her wagon and rides happily, even asking to be put in when she’s had enough.  After a few uses between surgeries and the past two days, we’ve gotten very worried about her deciding to suddenly jump out. So for our peace of mind, we’ve upgraded to a dog stroller , hopefully to be delivered tomorrow.

She’s sound asleep and we are hoping for another peaceful night.

I was away all weekend and just now catching up on your sweet Rucca’s story. Sorry you had to join us but we’re glad you are here sharing your journey! Sounds like a classically good recovery overall, and your attitude is stellar!

Yeah, the stumbles will happen occasionally but she will get stronger and they’ll be less frequent.

You are going to love the doggy stroller . Smart move to have it from day one, I wish I had gotten ours many years earlier for Wyatt Ray .

Can’t wait to see photos. Oh and speaking of, sorry your previous images didn’t show up. Here’s how adding images to the Forums works.

If you’d like help figuring out the process let me know!

Cheers to a good recovery week!

Shes doing really well.  Continue  with the slow and easy.  Good idea to get a stroller she can’t  jump oit of.

Hopingyoi can get the picture thing figured out.  Can wait to see this cutie Tripawd Warrior!

Thanks everyone!  We appreciate being part of the club no one wants to join. Day three has been another great day – no real changes from yesterday. The bruising is starting to come in but still very little swelling. If anything, it’s a little eerie how normal it all is.

We’re loving the stroller. It feels much safer than the wagon to the people and she seems very comfortable.

We are going to try this photo thing again. Including a few before photos just because her expression hasn’t changed throughout this and that makes me smile. 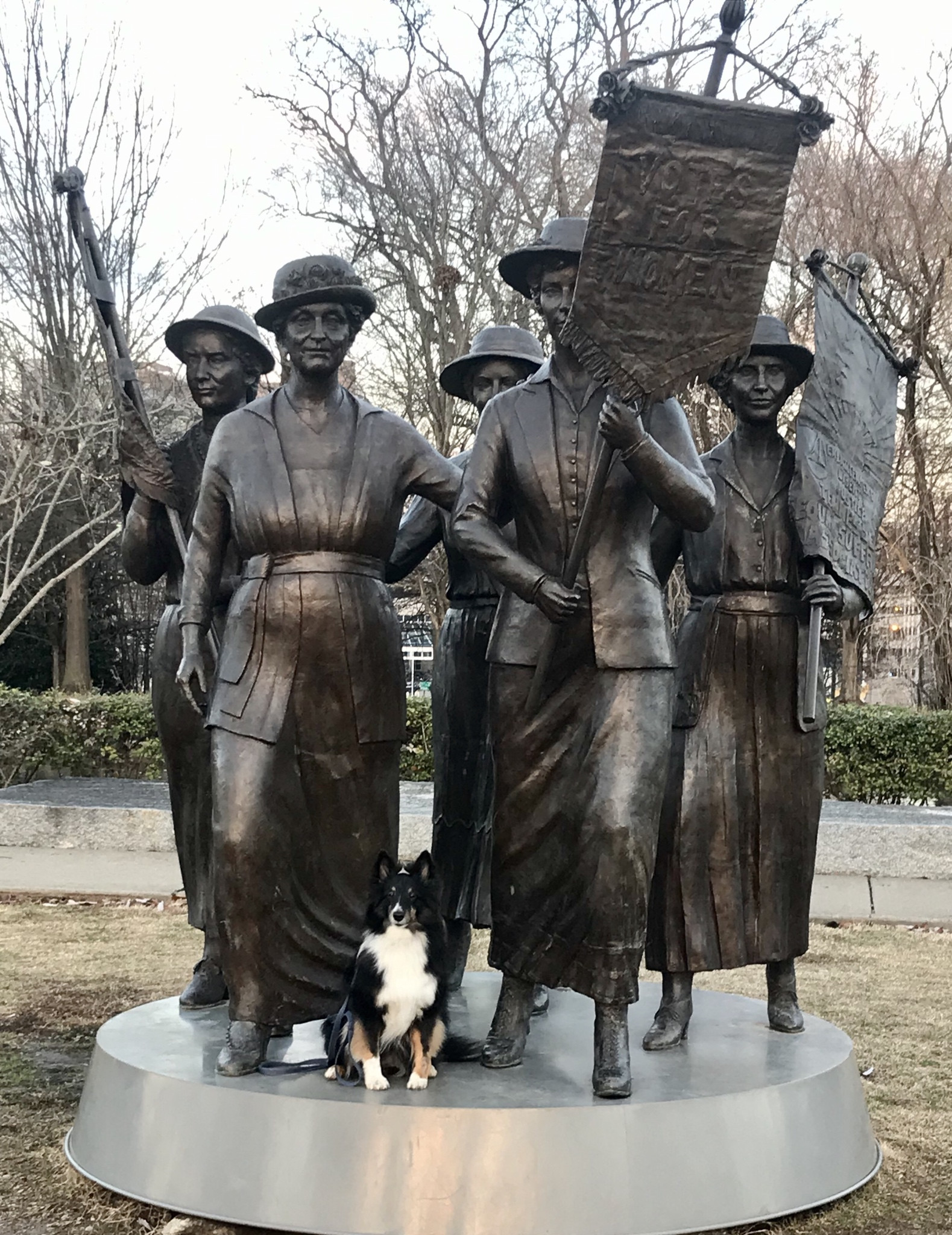 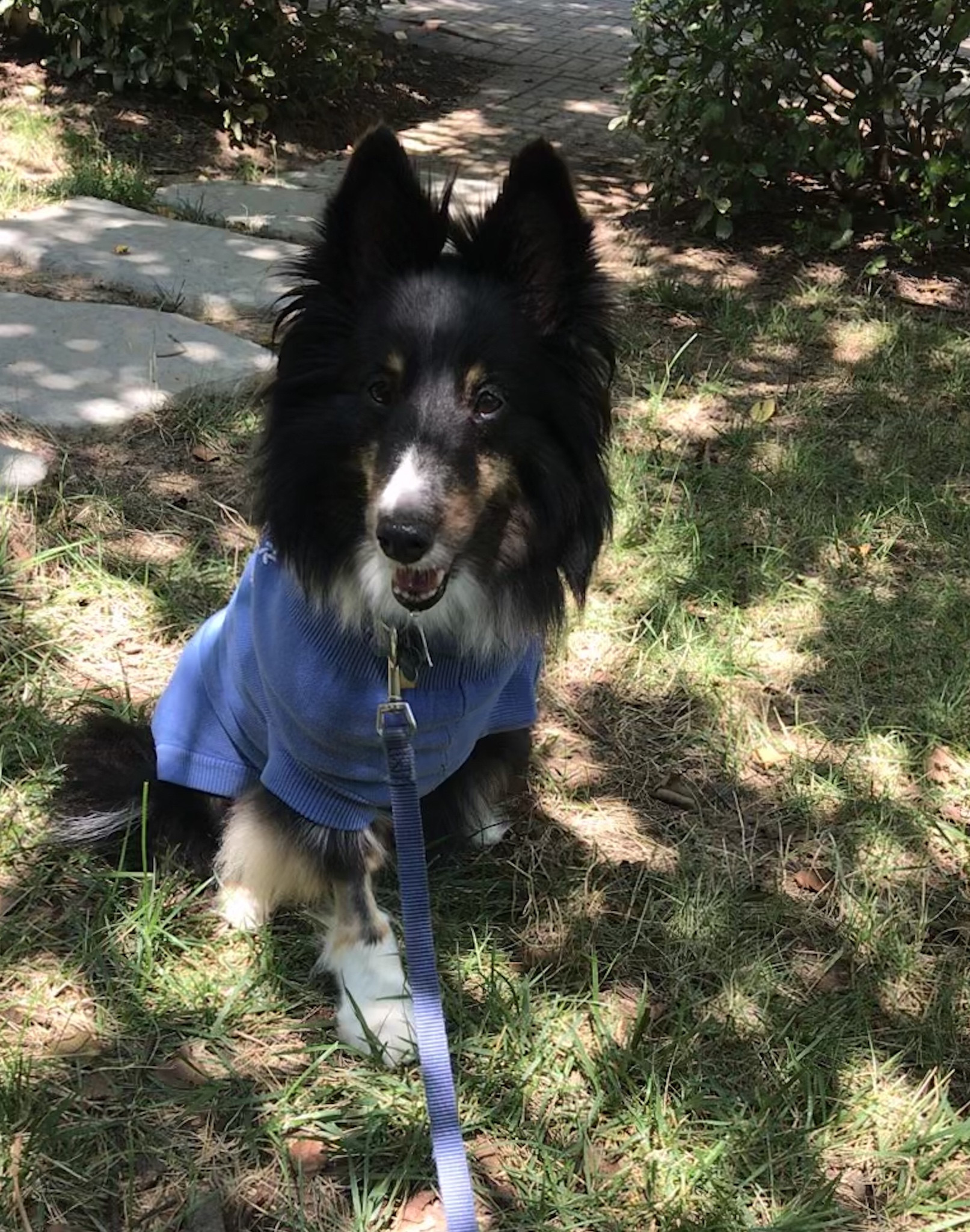 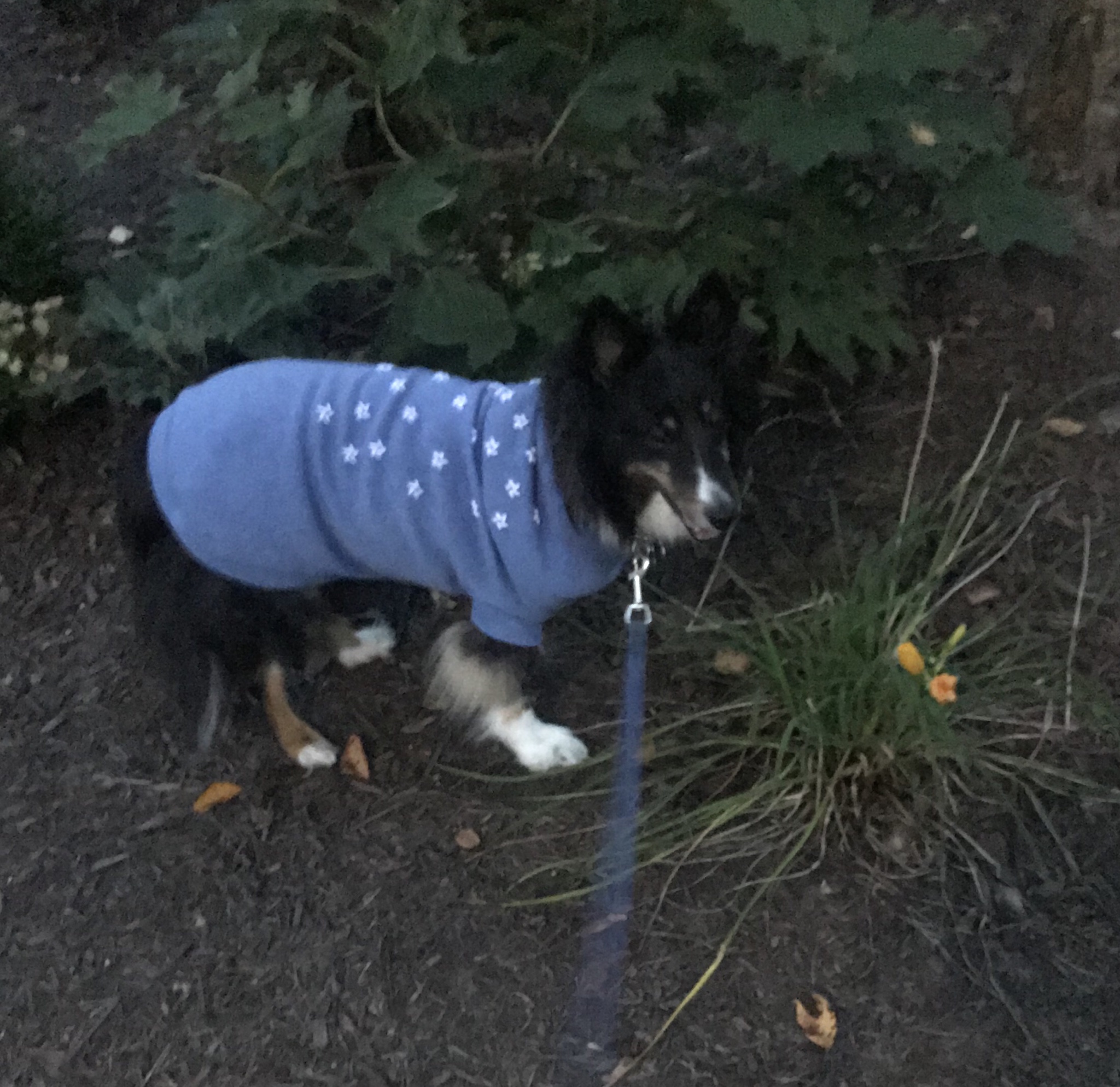 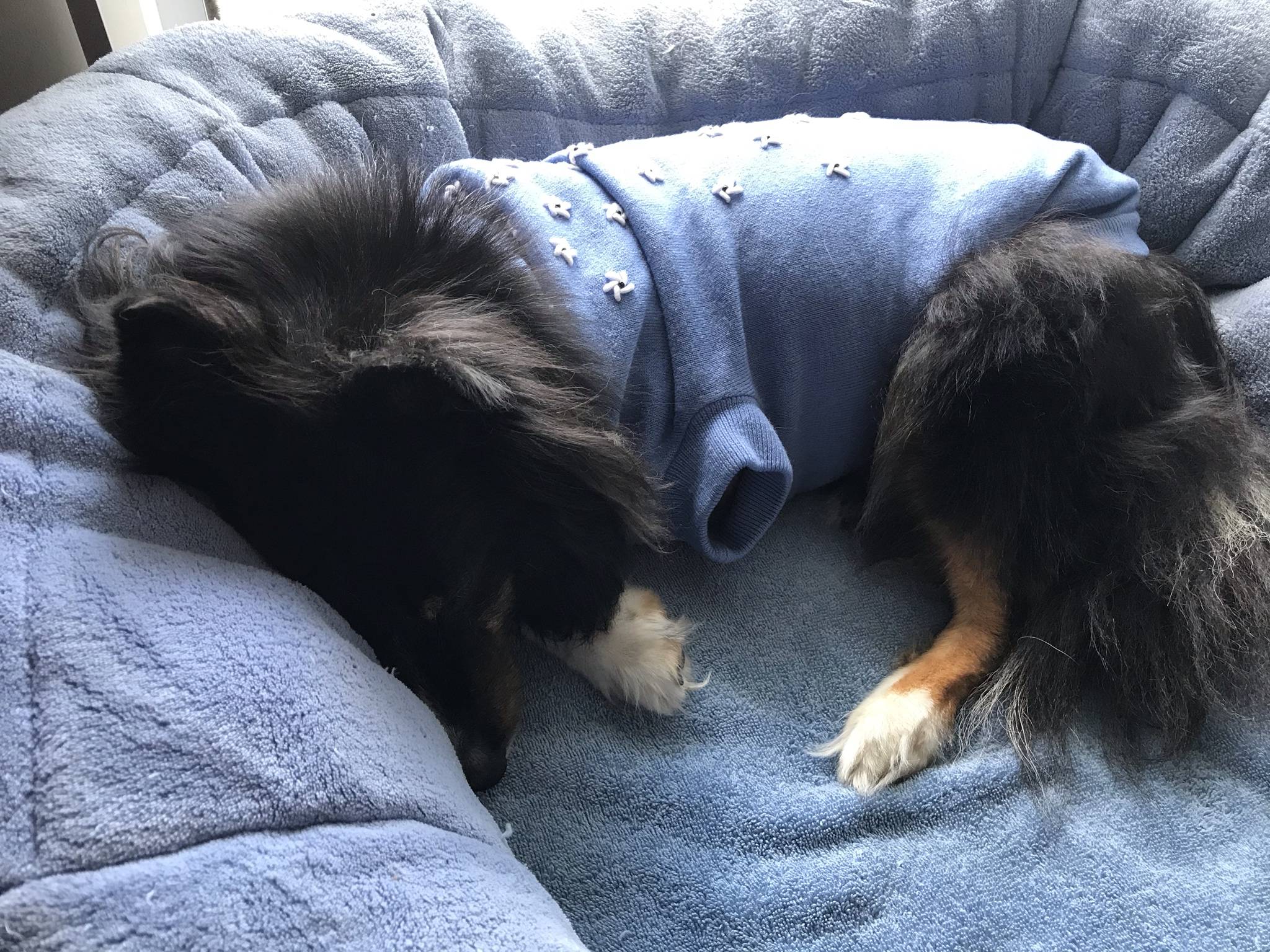 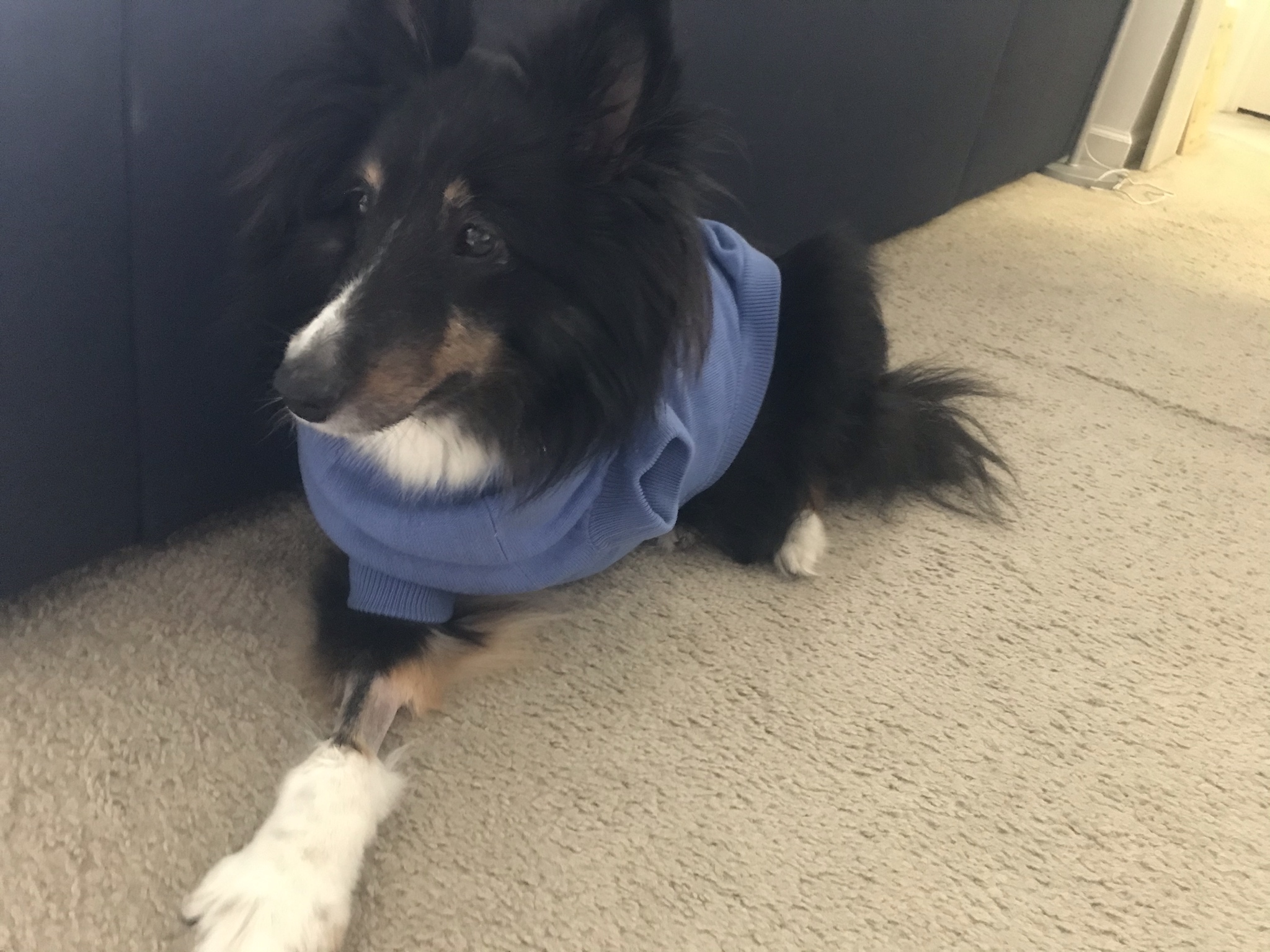 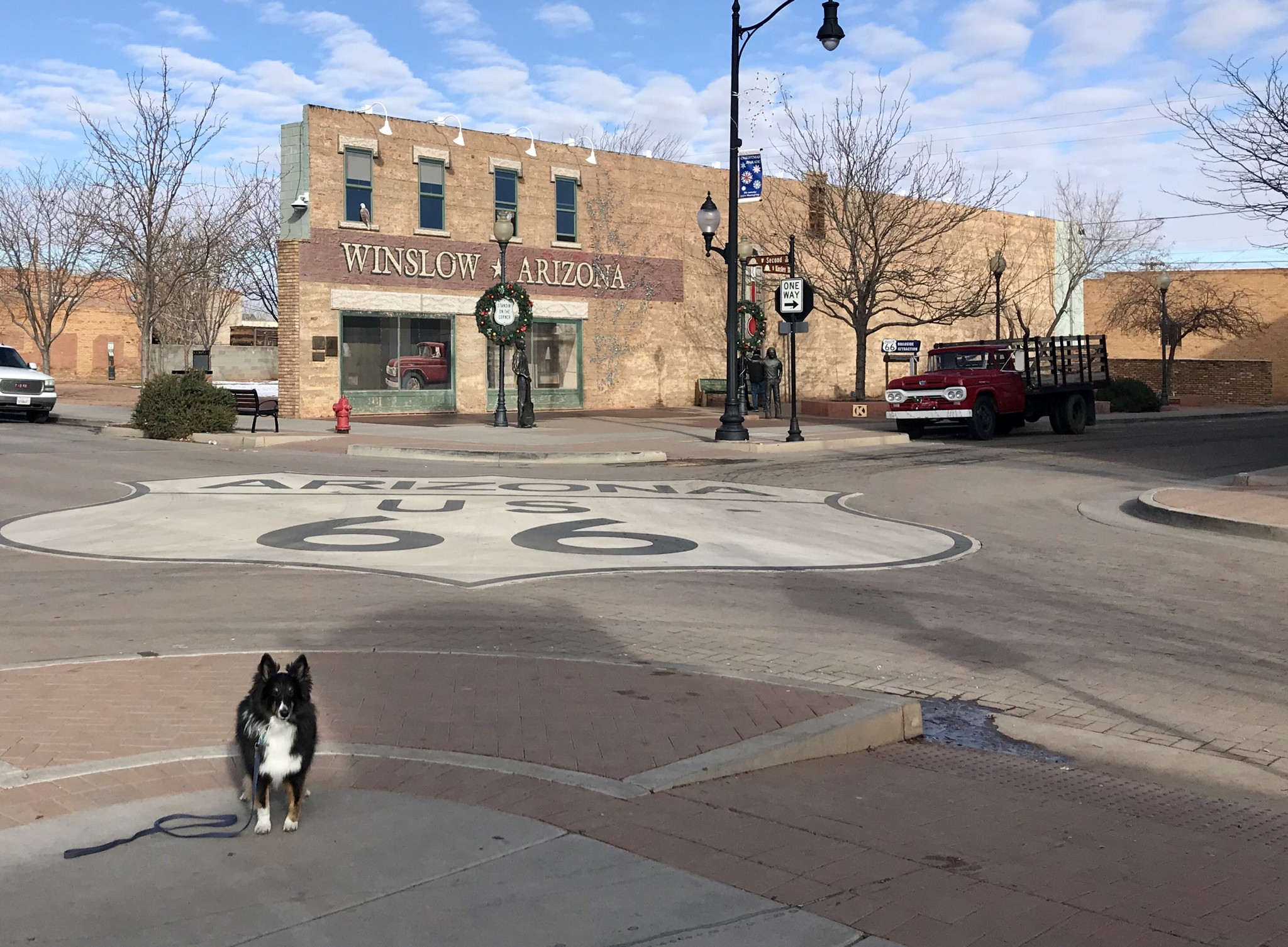 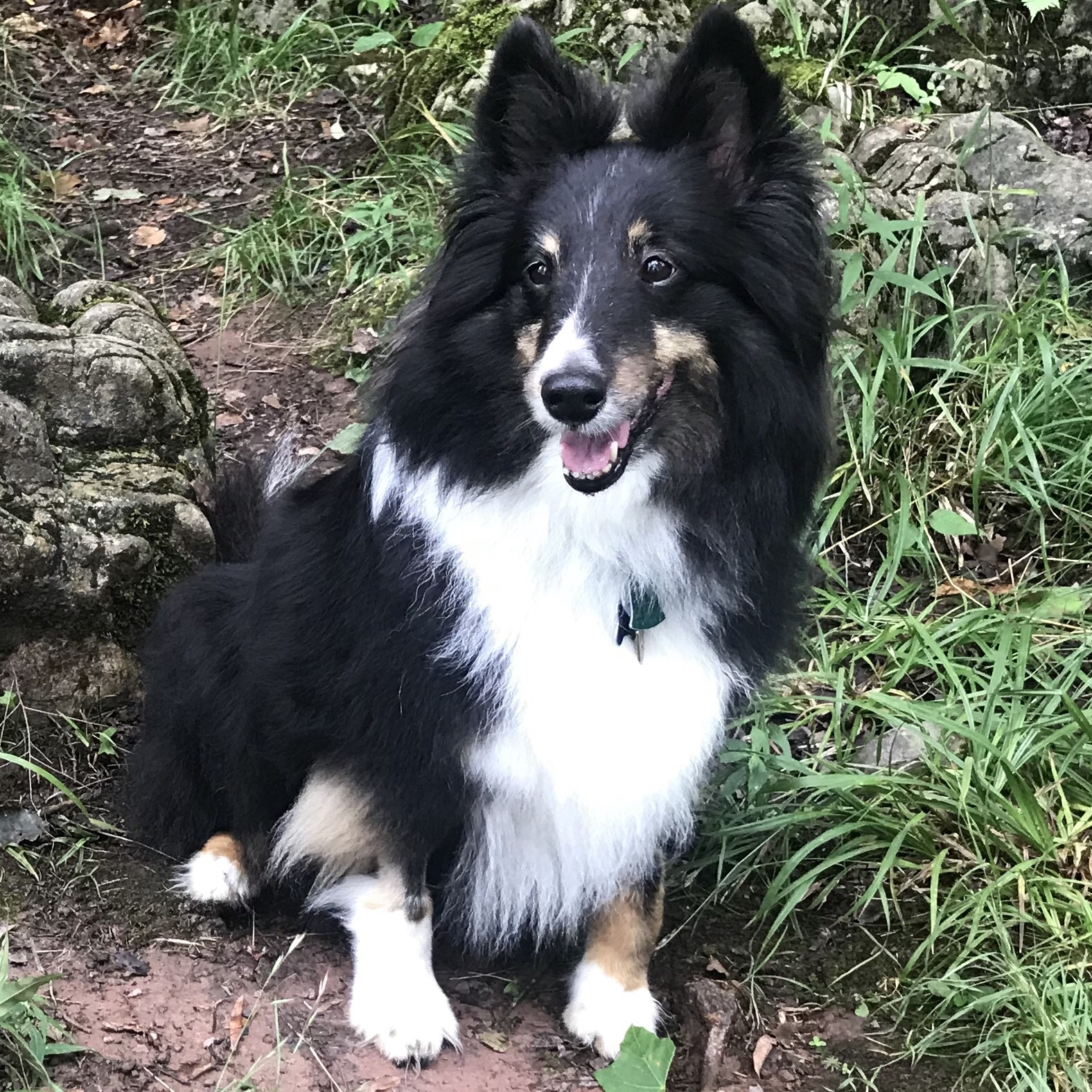 CUTENESS ALERT!!!   SHE IS ADORABLE!!  AND QUITE BEAUTIFUL TOO!!  Falling head over heels in love over here!!

Ahe really is doing  well this early on…very well!!   Sometimes  recoveries  can be relatively  smooth, so etimes not and sometimes inbetween. Sounds like she is having a smooth recovery.  Good!

Is that a flat bed Ford?

I’m glad she is doing so well, what a star!

And she really is a beauty too!

She is absolutely adorable!  Maybe I missed it?  Hold old is she?

Thanks everyone. She is a cutie. 😀. And yes, that is a flatbed Ford. Route 66 has more dog photo ops than any place we’ve ever been!

Rucca is ten now, turning eleven at the end of November. She is usually mistaken for a much younger dog.

Day Four and she is still going strong. She is actively begging for snacks again and asked for a tummy rub this afternoon. No interest in her toys yet and she’s still pretty much silent but otherwise just seems like herself. We’ve started to taper off the codeine and tomorrow is her last scheduled day on the carprofen. We are the lookout for pain signs but so far so good.

Wow she looks fantastic! Very puppy-like for a mature gal. How cool she is doing so well. Shelties are one of our favorite breeds, but then again we are total suckers for pointy ears and herding instincts.

I’m so hoppy you figured out photos. She is quite the road tripper! Was that first pic taken at the Women’s Rights park in New York?

Thanks Jerry!  We are big fans of pointy eared herders too. She’s always been a very active, happy girl and we think it keeps her young. The suffragette photo was taken in Nashville, on our big trip west last winter.

It’s hard to believe that we are already one week post surgery. Rucca is continuing to do great. She’s been off the caprofen since Wednesday and took her last codeine early this morning. We are down to just the gabapentin and antibiotic now and are not seeing any definite pain signals . She is completely back to her normal schedule and diet and is walking about 150-200 yards on each of her three daily potty walks. She LOVES her stroller and hops over to it as soon as she either wants a break or has finished her business.

She is still sleeping most of the time and doesn’t have much to say, which is very strange for a Sheltie who loves the sound of her voice more than anything. But we got a few barks today and (probably stupidly) praised her for them😀.   Also still not really interested in her toys but she has resumed sniffing out rabbit trails. She seemed to enjoy our first outing today – a quick car ride to pick up dinner.

The only real problem is that she has decided she is no longer happy sleeping by herself on the floor/dog beds. We clearly can’t let her up on human beds at this point and she won’t settle down at night unless someone sleeps on the floor next to her bed. An air mattress should be arriving tomorrow but this has not been the greatest thing for aging human backs! 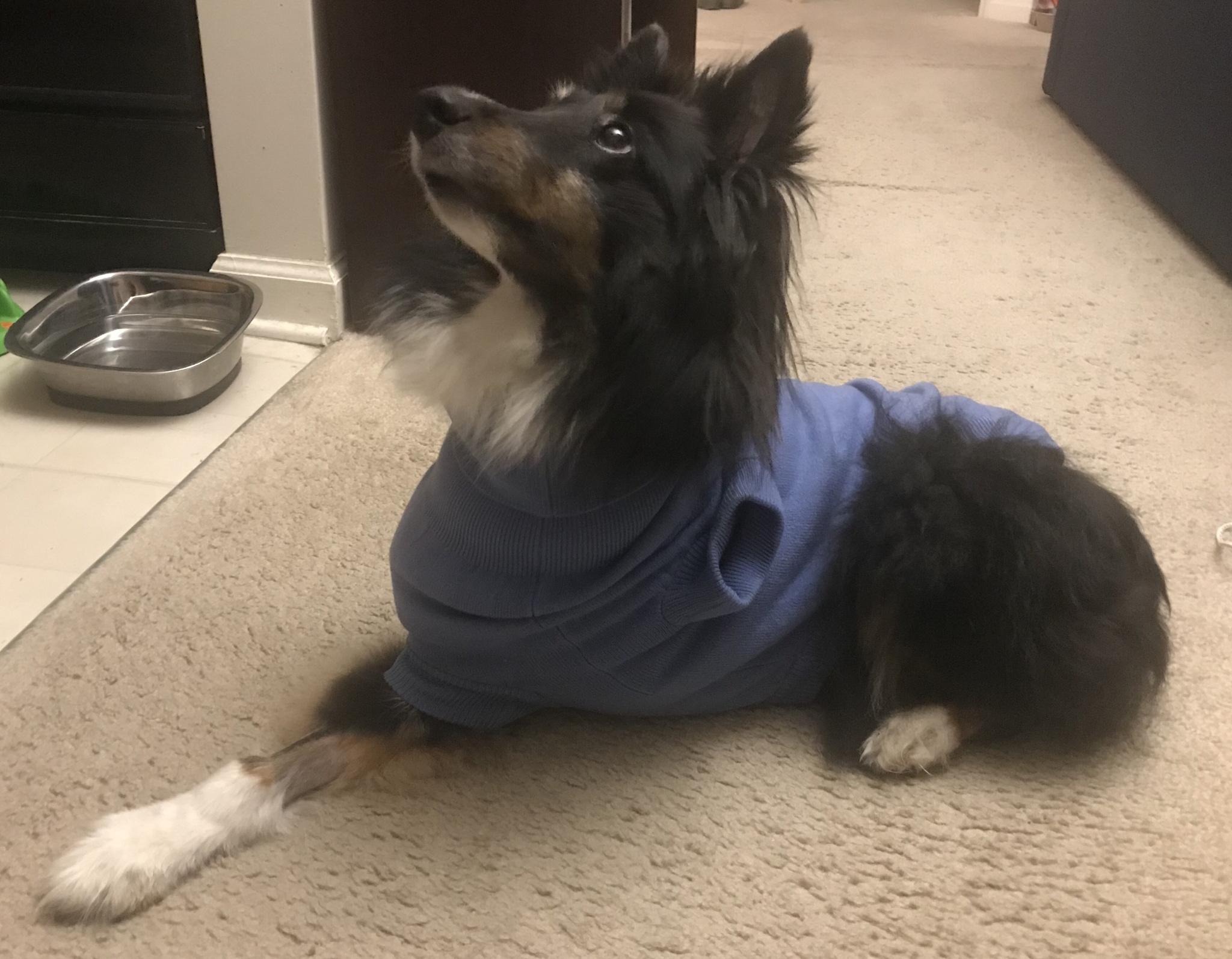 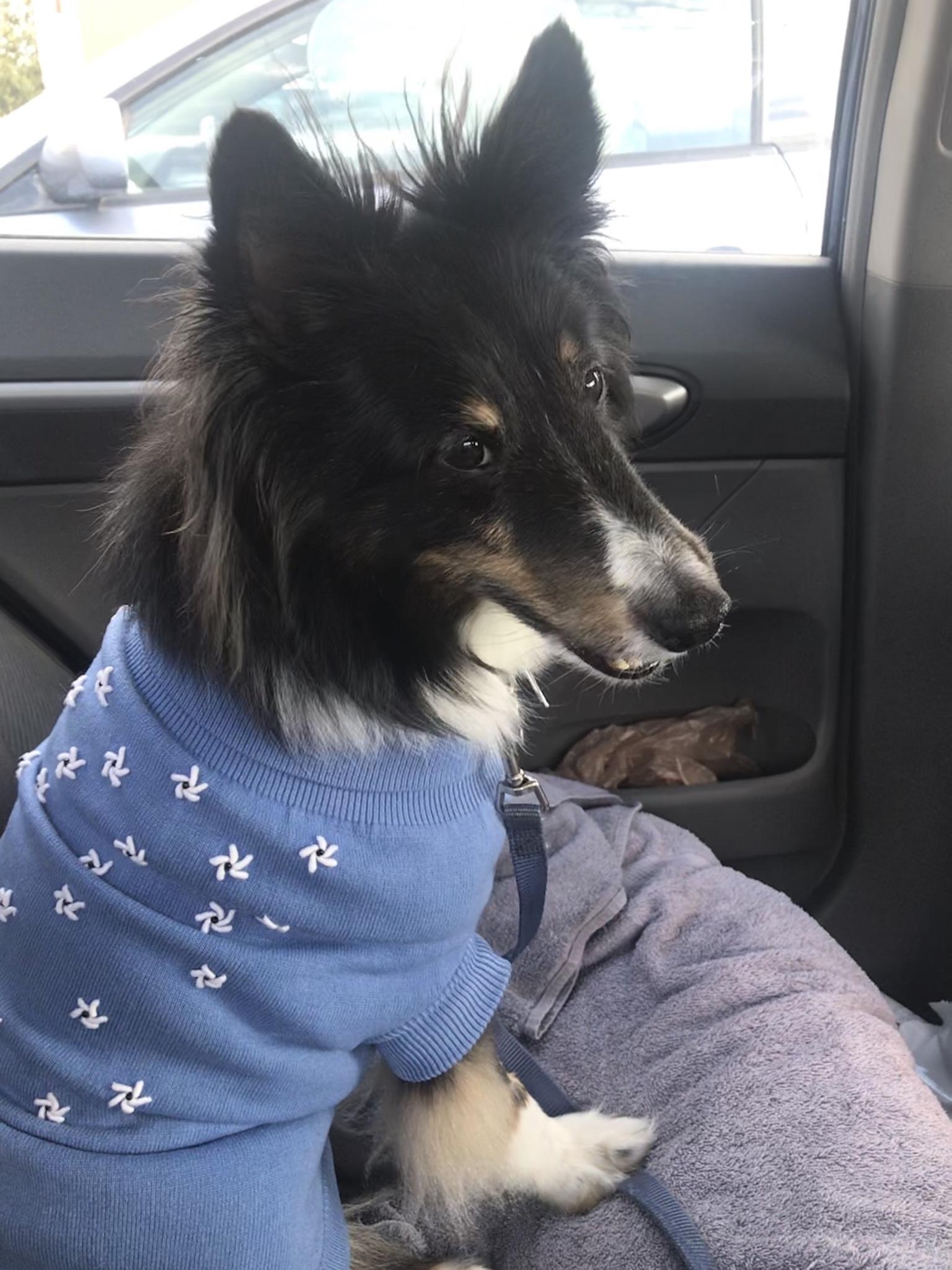 Hi Rucca’s human – what is your name?  I’ve been following Rucca’s story and I’m so glad that her recovery is going incredibly smoothly.  Sorry about the bed issues!  Griffin’s legs are so long and my bed is fairly low to the ground, so he was climbing up on the bed (and the couch!) 3 days after surgery.  I gave up trying to keep him off and put dog beds on both sides of my bed to give him a soft, non-slip place to climb down.  Hang on – recovery doesn’t last forever!  ~ Stacy

She is doing soooo well!  I’m so happy you guys are having such a smooth recovery!

Be careful what you wish for!  My Maggie had always been a pretty stubborn Pug but after her amp she became a bit more stubborn and VERY vocal

She LOVES her stroller and hops over to it as soon as she either wants a break or has finished her business.

Maggie loved her stroller too.  I didn’t think she would like it because when she was younger I tried pulling her in a wagon and she would always jump out.  When she was healed up we would usually start out walking which was a little challenging for me since I was walking two Pugs and pushing an empty stroller.  When she was tired and wanted a ride she would sit by one of the wheels.  Once we were at the park with my Aunt who was recovering from a stroke and using a walker, the fancy kind with wheels.  Maggie kept sitting by the wheels of the walker…when I explained to my Aunt what she was doing my Aunt let Maggie up on the walker and pushed her around the park

As far as the bed- can you put your mattress on the floor?  I did that when my Pug boy was recovering from knee surgery (twice) since he always slept in bed with me.

My name!  I guess that is important. 😀I’m Wendy.

She’s getting very insistent about wanting to return to the furniture but her legs are unfortunately not long like Griffin’s so we are doing our best to fight her. Not easy since she proved more than once today that she has no trouble jumping up on the couch at least. 🤦‍♀️  The plan is to move mattresses to the floor and take the legs off the couch as soon as she her activity restrictions are lifted (hopefully after her incision check on Wednesday).

I loved the story about Maggie and the walker. So sweet!