Sheldon has a good balanced tripawd stance.  The fact that he is already handling stairs  so well going up.  And needing a little assistance going down shows how smart he is.  He's not taking any unnecessary chances while fully adapting to his gait.

Truly, he's doing so well, especially  for a larger pupper!

Awwww beauuuuutiful! I love that you are still getting snow, the pups look so happy!

Cheers to getting around just fine. I'm thrilled to read that. Sheldon's recovery is everything we hope for, especially with giant breeds. What a rock star!

Update:  It's been a while but here's the latest.  Sheldon had his CBC checked this past Monday and all of his numbers were in the normal range!  No low blood counts from the Carboplatin.  He also had none of the anticipated side effects.

Now we have a minor complication.  Because he's been putting more weight on his remaining elbow, last week he developed a nasty pressure sore that he obsessively licked and chewed at to the point it split open.  It was odd as there was very little bleeding, only what i would call a small hole where i could even see his elbow bone!

We got it in time as there was no real signs of an infection developing.  My vet was able to arrange the clinic to have it surgically cleaned, debrided, and sutured up yesterday and he's now resting to start healing up.  They also took a culture to see if any bad bugs were in there.

He's now on Clavamox, Carprofen for inflammation, Gabapentin for pain (even though i don't think he really needs it), but he's been on it before with no ill effects, and I have some Trazodone on hand as needed to keep him calm and rested so that his elbow can heal properly. We just now have to restrict his activity for the next 2 weeks and keep the incision clean and protected.  I change the dressing once a day and also have a padded dog elbow brace/protector on it for added padding.  Also I've got a flexible cone of shame on him for when he's unattended.   We don't need another issue!  Moving forward we'll be definitely paying more attention to protecting his remaining front leg.

It's only been a day but so far so good and he still acting his normal goofy self.  He's got plenty of soft bedding and at the moment we're limiting him to just the family room and outside for potty breaks.

With all the success he had in his amputationn recovery, hopefully this minor setback will be even more straighforward to take of.    Fingers crossed!!!  Next week he'll have a post-op visit to check the incision and then the sutures get removed the week after.

This will delay his second chemo session, which was originally scheduled for Mar 30, out to April 16.

I'm happy he's knocking down those chemo sessions without any problem. You'll be done before you know it.

That's such a bummer about the hygroma though, I'm so sorry. You caught it in time though, and I like how proactive your vet is being. Those are tough things to heal and very common in front leg amputees (even rear legs ones over time). What elbow sleeve are you using?

We have fingers AND paws crossed that it's smooth sailing ahead.

Overall a good update.  You did catch the hygroma quickly and are doing what needs to be done to clear it up.  Just another part of the ups and downs of early weeks of tripawdness

Thanks for checking g in,  As always  we're  cheering for Sheldon

Hi Jerry, the sleeve we got him is this one: th=1

He's wearing the XL size and it fits him well.  There are a number of complaints about its durability, but so far its holding up well.

Oh that's really cool! Never seen one this good. So even with one front leg it's staying on OK?

I need to get this in the Tripawds Gear store. Keep us posted on how it's working out.

Yes it stays on very well.  There's plenty of room for adjusting it to fit properly.  You can make it as snug or loose as needed.  It's working well to protect the bandage and give his elbow a little padding.

I even ordered a second one to keep on him when the other is in the wash.  Durability-wise it's holding up so far, but we've been keeping his activity level low so he can heal.

SUPER cool to know it's working out. Sometimes finding the right garment for a front leg amputee can be sooo tough, especially for something like this. Thanks for sharing. Let the healing continue!

Update:  We had Sheldon's one week post-op visit to check the healing progress on his elbow surgery last week.  Most of the incision is healing nicely, however there is one small area where the incision still hasn't fully closed due to a small infection.

The culture results taken during his surgery came back identifying a bacterial strain that the Clavamox he's been taking is not effective at treating.  The vet told us to stop the Clavamox and prescribed Baytril instead.  She's pretty confident the Baytril will knock back this infection and the rest of the  healing can continue.  This just means we'll leave the sutures in for a few weeks longer (original plan was to have the sutures removed next week) and he'll get another check on April 20.  We're still planning on keeping his second chemo treatment on the 13th.

So overall pretty good progress, just a little slower than i was expecting.  Given that the incision is in a challenging location where there is a lot of movement and pressure, I'll take the slow and steady progress over further complications.  Most importantly Sheldon is still acting normally and this does not appear to affect his mobility.

WHEW on the elbow healing. That's good news. I'm curious if the vet has prescribed any kind of ointment or spray to help with wound healing? Or suggested laser therapy? Not even sure if that can work with hygromas but I know it does wonders for other surgical site healing issues.

It's great the vet is on top of the culture results and acted quickly. Is Sheldon having any GI issues with the antibiotics? Those are pretty strong ones. Some probiotics might be a good idea right now since he's been on them for a while. When Wyatt Ray was on them occasionally, we used FortiFlora per our vet's recommendation.

Great attitude about slow and steady progress! Yes this is a tricky healing area so any healing is a good sign Sheldon can get his life back again soon. Paws crossed the chemo can happen too!

Hi Jerry, they applied an antibiotic ointment (not sure which one) on the dressing that he came home with yesterday.  He came home with the dressing wrapped in gauze and then that was wrapped with vet tape.  This is to remain in place for no longer than 7 days.  Only change earlier if there is excess fluid showing through or bad smells.  After which I will remove it and go back to daily island dressing changes.  She also liked the sleeve we were using and told us to keep using it.

No other medications or laser therapy were brought up.  The plan and hope is that the Baytril and extra time with the sutures in will help his healing.  From what I've read, the Baytril is pretty potent and fast acting and is used for more difficult strains of bacteria.  Do you have any experience with it?

He had no GI issues from the Clavamox - he was on that for almost 3 weeks.  For the Baytril, he's only had the first dose last night and so far no GI issues.  One of the possible side effects is supposed to be lack of appetite, but this morning he gobbled up his turkey slices with his carprofen, ate some doggie cookies, and a Greenie treat and so far no other noticeable side effects. We'll see how his appetite is later tonight for dinner.

I'll check with our vet about probiotics, she didn't mention any but I figure they can't hurt. 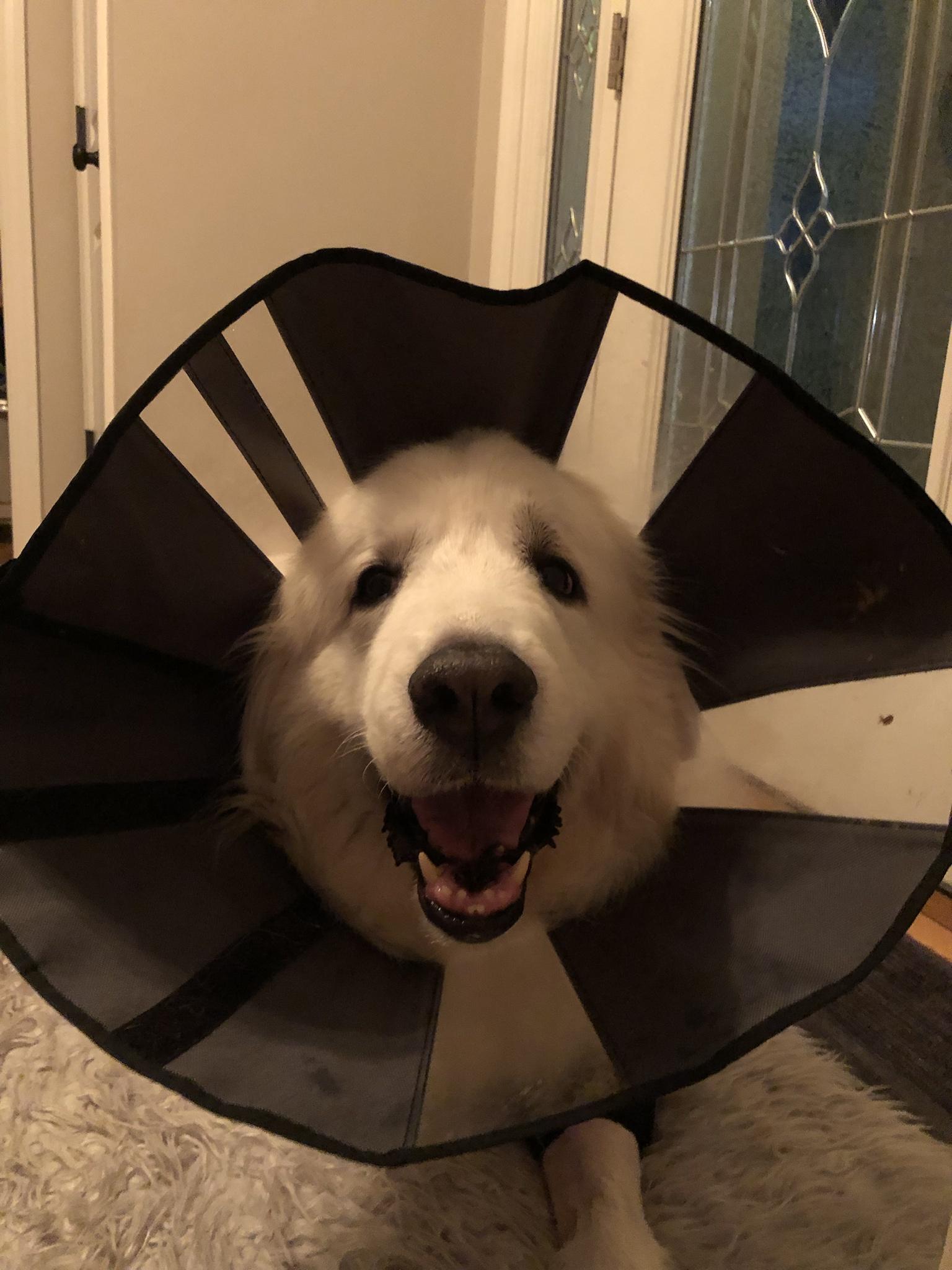 Wow your vet gave you some really clear instructions! Impressive!

Yeah Baytril is one that Wyatt was on after he had an intestinal blockage removal surgery. He didn't get any infections afterward so it did the job.

Sheldon is one tough doggie! So many get upset stomach or nausea when they're on antibiotics. He's a real easy dog it sounds like.

Yes definitely ask the vet about the probiotics. Antibiotics wipe out helpful GI flora and gut health is so important especially during chemo.