Hello Tripawd community.  I haven’t posted in a long time, so Johnnie’s journey needs an update.  Since October ’17 Johnnie started having seizures, but with no other symptom.  At the time, the onco-vet said it could be a brain tumor, but we decided not to investigate, since we wouldn’t be trying any heroic treatment on Johnnie.  All we want is to preserve his quality of life as long as we can.  Ever since, he has been supervised by a neurologist-veterinarian, and has been taking fenobarbital.  This medication is harsh on the liver, and also began to cause mobility issues, since it weakens the muscles.  We decided to reduce the dosage, knowing that he could have seizures once in a while, but to keep him moving is for us a major goal.

Johnnie had a good summer (December – March), with daily swims, although it was noticeable that he was slowing down, because of the fenobarbital and also his arthritis which worsened.  In the end of March he bruised his big callous of the remaining front leg.  This led to a series of problems and the medication caused major damage to his liver.  We have been battling liver issues since 2015, so this is not a new scenario – only that now he is two months short of his 10th birthday.  Fortunately, we were able to do a turnaround and the liver enzymes, although altered, are within an acceptable range.  After two months without seizures he had two very strong episodes and began showing major behaviour changes:  pee around the house, many times a day;  staying up all night barking in a constant two-bark rhythm  ( wow-wow … (a pause) … wow-wow …. ).  Friday we had an appointment with the neuro-vet.  She is now convinced he has a brain tumor, which can either be a metastatic one from the osteosarcoma, or a primary tumor.   We are sticking to our plan of going forth with quality of life over quantity, but hopeful that we will be able to celebrate Johnnie’s 4th ampuversary on May 20th.

For the first time, he is taking prednisone , and in 24h he regained his mobility and stopped the barking and the peeing around.  I was impressed!  Of course it takes a toll on the liver, but at this very moment all that we want is for him to live as normal a dog life as he can.  Today we was already hopping around and went for a swim.

He is now taking:  20mg prednisone twice a day;  1 mg dipyrone (not sold in USA)  twice a day;  100mg fenobarbital twice a day;  SAM-E and milk thistle for the liver;  K-9 Immunity Plus, 3 chews/day;  chondroitin glucosamine.    The goal is to reduce the prednisone dosage to preserve the liver.  Will do a blood test in three weeks.

Can’t say this year has been an easy one for Johnnie, but we knew that eventually we would have to deal with other health issues.  Going through a cancer treatment is not easy, and of course this takes a toll on human or dog health.

Hopefully, in three weeks we will be celebrating his 4th ampuversary with a nice chicken cake ( no pork ribs this time, buddy ).

Here are some photos from February – Carnaval 2018 – when he was thriving, showing off his new Ruffwear Float Coat .  The others are from this weekend, after prednisone .   Last week he was barely standing up!

OMD!!!!   OOOOOOOMMMMMMDDDDDD !!!   You have noooo idea how good it  is to hear  from you!!   I cannot tell you how many rimes…..soooo many times you and Johnnie cross my mind!   💕

We often refer to Johnnie when people  are all wrapped up into some dire”statistics”  about  timeframes, quality etc. Johnnie is such a BEACON OF HOPE aound here!.REALLY!!!

Andnnyes, you jave had a challenging  hear, that’s for sure.  And I’m  sorry, so aorry to hear about those rough times.

As usual though, YOU ALWAYS, ALWAYS, ALWAYS have Johnnie’s well being at the top of the list whenever  you  are decisions  for Johnnie.   Honest to goodness, the way you care for Johnnie, the way you focus on his joy and hapoiness, all that HAS to be part of the reason he has been so VICTORIOUS  all these years!😁

My Vet told me one time whenmit comes to Prednisone ,  sometime it CAN be a MIRACLE drug at jist the right time.  Sounds like that’s  the case for our BELOVED JOHNNIE😚  You are doing EVERYTHING POSSIBLE to maintain Johnnie’s quality without “doing harm” to his Spirit…wirhout doing harm to the essence of who Johnnie is.😎

Hearing that Johnnie is still swimming  just lights up my world😁  Having the privilege  of following him in his all these years, I know how important swimming is to him!!   I always ,ove the pictures of him soaking wet after a swim and sunbathing  to dry off.

As far as waiting to celebrate his TENTH BIRTHDAY until his actual birthday. ….heeeell nooool!   We’re  starting his pawty RIGHT NOW!!

EVERY DAY BETWEEN  NOW AND MAY 20th WE SHALL CELEBRATE  THE BIRTH OF THIS MAGNIFICENT  SOUL WE CALL JOHNNIE 🤣😃😎    EVERYDAY  IS JOHNNIE’S  BIRTHDAY!!!!!

AND JOHNNIE GETS A LITTLE SCOOP OF ICE CREAM EACH DAY!!!   SHHHHH……secret….shhh…Happy Hannah taught me that ice cream is a very good nutritional supplement!

We donate a  request though. …PICTURES AND VIDEOS!!!  WE MUST HAVE THEM😁   Include pictures of him eating ice cream!

Sending all the best wishes in the world and the power  of positive healing to our very special Johnnie…..and extra hugs and love to You Daniela💖

HAHAHA!!!  Ask and you shall receive!  And therenya’ have some of the best smile making pictures EVVVVVER of an ecstatic  happy Johnnie!!!   Smoooooching that adorable mug right through the sxreen!😁😁

And love how you have his swim best AND floaty thing to help his rear end!!  Brilliant!!

Hi Sally.  So good to read your post !   True that these years haven’t been a smooth ride all the time, but all in all Johnnie has been a miracle dog.  47 months since surgery, and already 4 years since the diagnosis.  I never thought this dog would actually become a senior !

This victory was only made possible because of Johnnie’s oncologist and her team, and the ongoing support from this wonderful community of “virtual friends” I met at Tripawds.  So THANK YOU, each and every one of you for being there to help.

Will put up pictures and videos for sure – but will have to pass on the ice-cream because the furry birthday boy is allergic to lactose (yes, can you believe this? since 18 months, poor guy – and he absolutely loves the smell of cheese).

Tuesday May 1st is Pepa’s 8th birthday, so we will celebrate with a family barbecue.  Pepa is doing just fine.  A bit on the chubby side, but that’s ok.  Hope she keeps this good health going, because she isn’t easy to take care of like Johnnie.  The few times we had to give her some medication were complicated ones.

So, Tuesday  we will have more pictures !

About the prednisone :  the neurologist said she can’t guarantee how much time it will hold him up.  Its miracle effect can wear out in the near future – we don’t know if days, weeks, months ….  Living one day at a time, right?

Tight hugs to you and your furry pack!

Daniela! Johnnie the Miracle Boy! It’s great to hear from you both.

I’m sad about the brain tumor but … WOW he is such a hero, a total fighter, a warrior and a role model of kicking cancer’s butt for sooo long! You have managed to give him the best of care and it shows. I love your dedication and conscientiousness about his medication and nutrition needs and have no doubt that you will help him make the best of every day as time goes on.

We hope you don’t mind but we just had to share your handsome hero in our Tripawds Photo Gallery. What a great shot! 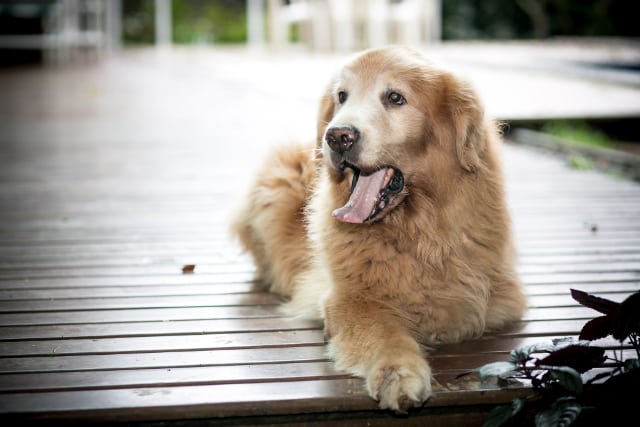 Please give Pepa a big hoppy birthday kiss from us. We can’t wait to see the celebration photos!

You were a major inspiration for me and Eurydice during our cancer journey and now that my girl is an Angel you are still an inspiration for all of us who fought the fight and for those who are on their journey.

I always loved your pictures, you capture Johnny’s kind and loving nature so well!

Cortisone is such a miracle drug, my baby was on it and it really transformed her life.

You are so right in saying all that matters is making Johnny’s life wonderful and you’ve mastered it, girl !