Managing Lung Metastasis in Dogs and Cats with Limb Cancer

You can also find more about her approach at her website, A Path With Paws

We forgot to share this when we first published it:

Curious about safety measures when your dog or cat is on metronomics ? Dr. Dressler and Dr. Ettinger explain what you need to do (and not do) when handling cytoxan and other chemotherapy drugs at home:

Tips for Giving Your Dog or Cat Metronomic Chemotherapy at  Home

Dr. Joanne Intile, one of our favorite oncologists, wrote this article about metronomics chemotherapy for all types of cancers.

"All About Metronomic Chemotherapy"

Thank you for sharing this!!! I am going to look into this for Eddy.

Betsy Golden and Angel, Eddy.  Eddy was diagnosed with Osteosarcoma 7-23-14, had a left rear amputation 8-07-14, had 3 rounds of carboplatin chemotherapy,  a small lung met was discovered in October, had 2 rounds of doxorubicin, and unfortunately more lung mets were discovered.  Eddy fought cancer valiantly and went to the Rainbow Bridge 1-6-15, at the age of 7 years and 359 days, just six days short of his 8th birthday.   Best Dog, Ever....you will never be forgotten.

WOW this is exciting! Thanks to Dr. Sarah Boston of the University of Florida's Department of Small Animal Clinical Sciences Oncology Department, we just learned about a non-surgical lung metastasis procedure that we really hope will be a game changer for folks whose pets are coping with mets. It's called Microwave Tumor Ablation, and it's been practiced on humans with lung mets for some time.

Listen to Dr. Boston describe it on Tripawd Talk Radio.

It's a relatively simple day patient procedure not unlike a needle aspirate, in which a needle goes into the lung and obliterates the tumor. This procedure could take the place of the radically invasive lung lobectomy procedure for the right candidates.

After the show, Dr. Boston mentioned to us that she is getting a program up and running at UF which will offer this procedure to animals with certain kinds of lung mets. We'll keep you posted. Meanwhile here's some information about how it's used for humans:

Microwave ablation (MWA) is a technique to destroy tumors and soft tissue by using microwave energy to create thermal coagulation and localized tissue necrosis. MWA is used to treat tumors considered to be inoperable or not amenable to resection or to treat patients ineligible for surgery due to age, presence of comorbidities, or poor general health. MWA may be performed as an open procedure, laparoscopically, percutaneously or thoracoscopically under image guidance (e.g., ultrasound, computed tomography or magnetic resonance imaging with sedation, or local or general anesthesia. This technique may also be referred to as microwave coagulation therapy.

Thermal ablation offers an intriguing therapeutic option to improve local tumour control and survival in patients with early-stage non-small cell lung cancer or patients with limited metastatic disease from non-lung primaries who are not candidates for surgery . .

Tumour ablation’ is defined as the direct application of thermal or chemical therapies to a specific focal tumour (or tumours) in order to achieve either eradication or substantial destruction. The expression ‘image-guided’ is added to the term ‘tumour ablation’ because most of the therapies are performed using imaging modalities such as fluoroscopy, ultrasound, computed tomography (CT) or magnetic resonance imaging (MRI).

Depending on the size of the tumor, RFA can shrink or kill the tumor. Because it is a local treatment that does not harm much healthy tissue, the treatment can be repeated as often as needed to keep patients comfortable. It is a relatively safe procedure, with low complication rates.

By decreasing the size of a large mass, or treating new tumors in the lung as they arise, the pain and other debilitating symptoms caused by the tumors are often relieved. 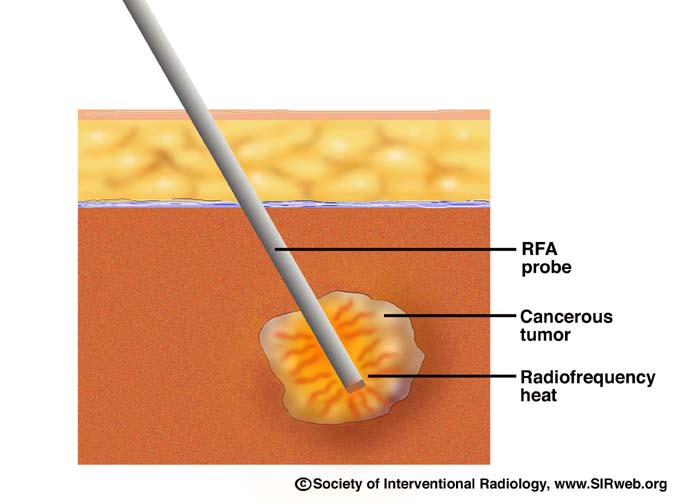 Thank you sooo much for posting this! It seems...sometimes....that we are stuck in the "same ole" same ole. If "x" happens your only options are whatever...status quo options that have been going on for years with pretty much the same results all wrapped up nicely in the same statistical package.

Your post is HOPE! It's a brand new potential option in the beginning state. Who knows where it will go from here?

The hardpart is "hurrying up...and waiting"!

Sally and Alumni Happy Hannah and Merry Myrtle too!

Forgot to add this article a few years ago. In it, Dr. Joanne Intile discusses amputation surgery for bone cancer after lung metastasis is discovered.

Great Osteosarcoma Article: Diagnosis is Cancer, Now for the Treatment

Just came across this interesting study about treating osteosarcoma spinal mets and related pain with stereotactic radiation therapy (SRT). There isn't much on treating spinal mets so I thought I'd mention this for future reference. The study came out of Colorado State and one of the study leaders is Dr. Stephen J. Withrow, DVM, who among many other things, pioneered limb sparing surgery.

"Use of PET/CT and Stereotactic Radiation Therapy for the Diagnosis and Treatment of Osteosarcoma Metastases."

This case report describes the use of two new concepts in the diagnosis and treatment of metastatic osteosarcoma (OSA) in one dog. The dog was initially presented for positron emission tomography and computed tomography (PET/CT) as full-body staging following amputation and adjuvant chemotherapy for treatment of OSA of the proximal tibia. The initial PET/CT did not show evidence of metastatic disease. Six mo after OSA, diagnosis pulmonary metastatic nodules were identified and oral toceranib phosphate was initiated. Twelve mo postdiagnosis the dog developed neck pain and non-ambulatory tetraparesis and was diagnosed with a C7 vertebral metastatic lesion based on magnetic resonance imaging. A second PET/CT was performed to screen for further metastatic lesions, and a nodule within the right ischium was identified. The C7 and ischial lesions were treated with stereotactic radiation therapy (SRT). Sixteen mo postdiagnosis, a third PET/CT was performed due to increasing size of the pulmonary nodules and a right-sided liver metastasis was detected. The liver mass was treated with SRT. The PET/CT scans facilitated identification of gross metastatic lesions that were subsequently treated with SRT, which resulted in clinical improvement of the dog's neurological signs.

Just wanted to share Carly's experience with Palladia to fight lung mets. So far it's working really well for her! YAY!

Been a crazy few months!

And here's a Tripawd Metastasis Miracle Story from HoneyBear and her humans. This will give you hope if you are fighting lung metastasis with your three-legged hero. What an amazing end to a very scary time for this pack.

A Scare That Turned Into A Miracle 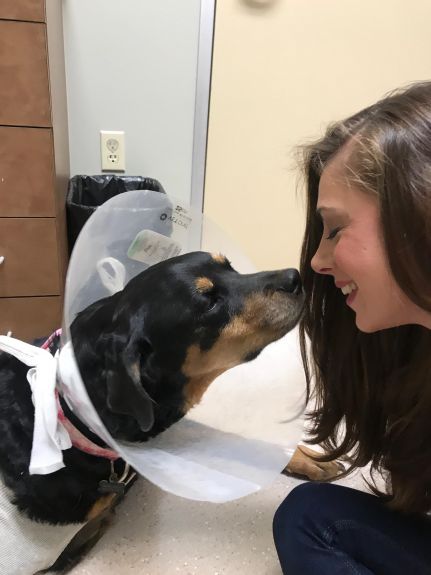 To be able to celebrate miracles around here is what gives us all hope!! And HoneyBear is a BEAUTIFUL miracle gal! 🙂

Looks like we need to update this discussion with our most recent articles and conversations about metronomic chemotherapy .

From the Tripawds News Blog :