Tripawd Frankie has second torn cruciate on other leg

FANTASTIC news and the one leg can be figured out later even better phew!

Thanks for the update. Let us know when Frankie gets home, please.
Extra kisses to Myrtle
❤️❤️❤️

Oh Sally this is terrific news! We are doing the hoppy dance here, soooo thrilled to know this surgery is done! Thank you for taking time to let us know.

Now you know the drill...get your rest, spoil Myrtle rotten and rest up!

Thank you so much EVERYBODY!!!    And my Merry Myrtle appreciate you all thinking of her.

This was Merry Myrtle and Frankie  sleeping last night.

And I jave nomidea why this  shooed up upside down...it's  right side up in my gallery.  A yway, you get the point. 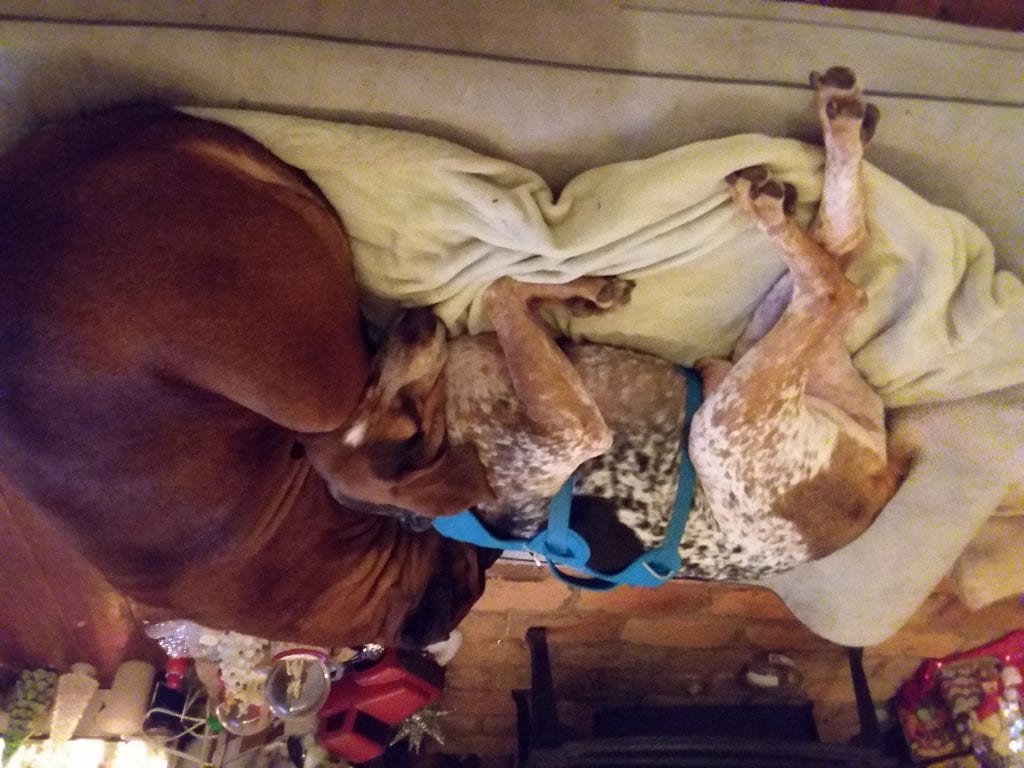 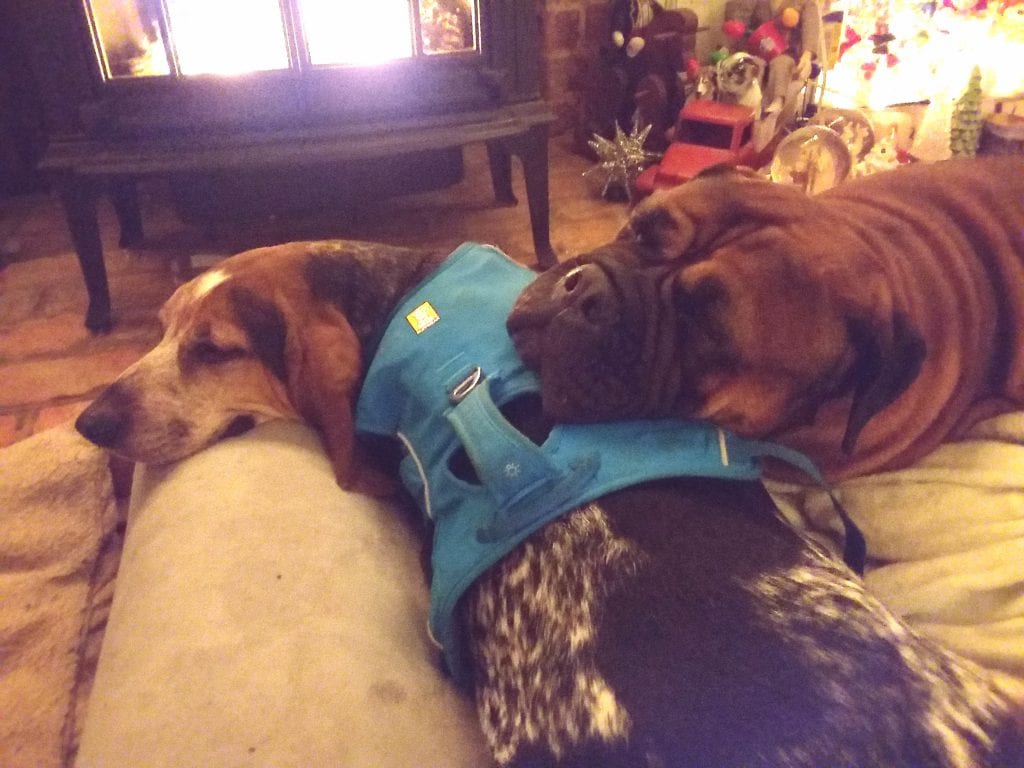 And here is Merry Myrtle tonight.  I did NOT arrange her stuffy babies.  She did it all by herself😚😚😙

Another thing she did that melted my heart💖, ahe fot in front od tjeir bed and fot down in the play position, v utt up high, wagging her tail  and barked at the bed....then stopped to listen for a response, and then repeated it.  Of coirse, Fra kie didn't  bark back.   But another reson it was so special , this is the first time I've  seen her take the play position.   Soooo sweet😎 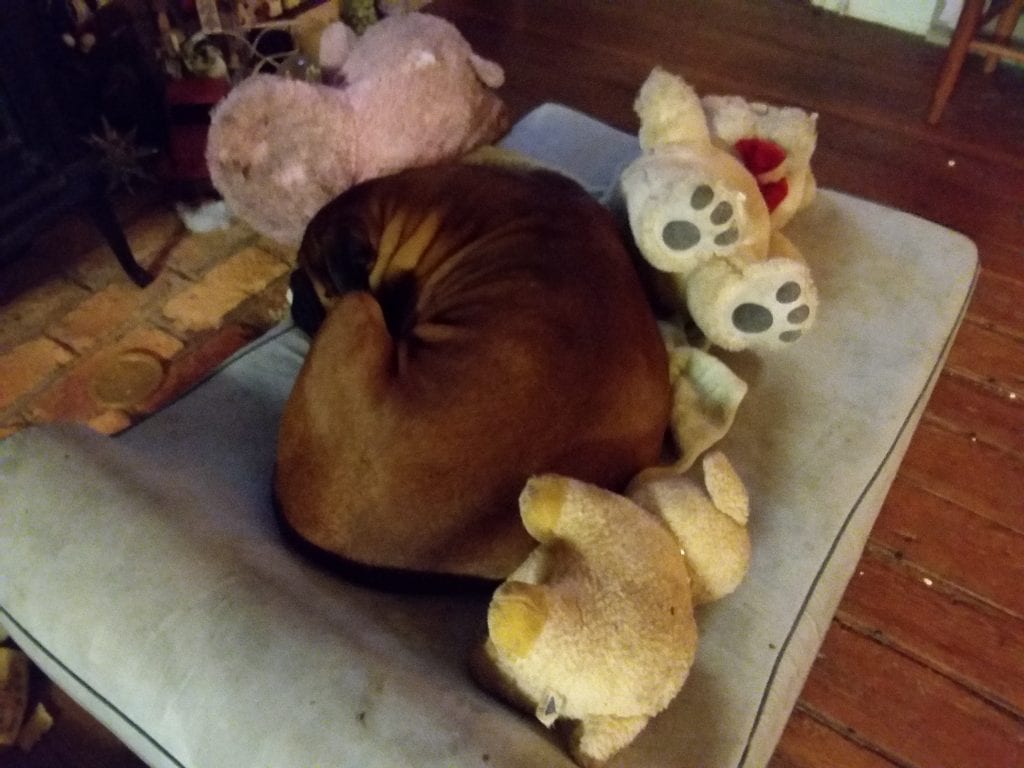 Awe so sweet and so special.
Good girl Myrtle Frankie will be home soon.
Ditto get some rest and eat something!!
❤️❤️❤️

Awwww what best friends! How sweet!

Melts my heart. So much love there 💖 So glad she's made a comfy nest to wait for her brother in.

You got this, and Myrtle will keep you busy till Frankie comes home.

I called around midnight.   Not up waking up very well, but  he's  alwrt. His body temperature is low so theynare heating for him to lay on.

Yeah, not liking this!

Okay....jist now as I'm  typing I decided to call back  again and ask for the Vet on duty!   This time I got a different Tech and she told me that body temp drop is " ormal" sometimes after surgery  and pain med inkections can cause it too. Sje also said that he has been more alert, although he is sleeping a lot.  As I was talking she said another Tech put a blanket over him.  He was alert enoigh that he woke up and tried to move away from it.  That's  my boy!

I feel like that just by "asking" to speak to the Vet on duty (even though I didn't  get to), I got a little more information and a little more reassurance.

He did eat some!

She also said that the body temp can drop if he needs to poo.  Now I don't  know of that's  true, but Frankie is BERY, VERY ritualistic  when it comes to when he poops and where he poops.  And one of my concerns has been how to take him to poop during recovery.  With everything he's  already been throigh, he has yet to poo when leashed and INSISTS on gping under the deck wjere I couldn't  follow him.

(((Sally))) I don't know about the poop part either, lol but anesthesia, pre-anesthetic cocktail, and other meds may lower body temp. That is normal. Animals also process anesthesia kind of like people in the sense that some wake right up, some take a while. Some wake up happy and alert, some wake up crying and thrashing. He is taking a while to wake up, yes but that might not be a totally bad thing, just might be a Frankie thing. That procedure takes a while. Heck, it takes a while just to prep them for it because of what it is so I would not worry needlessly.

As for him going to potty, gonna have to take that step with him when it arrives. With him being under strict confinement for a couple of weeks, you may not have nearly the problems as you did last time. Please don't worry yourself now over things that you will deal with later. This is a different situation and there is a lot of recovery that will be going on between now and then, ok?

How are things in the light of day? What a long, stressful night you had! Maybe sleeping a lot is a good thing for active Frankie - he NEEDS to rest, to get the healing started. And yes, Dr. Google is not our friend, especially at 2am (not that I have ANY experience with this). Waiting patiently for the next update....hugs!

I got a quick message from Sally. She is off to visit Frankie! She said he is doing ok

That is all I know but I wanted to share it with you. I am sure she will be in to post after seeing her furbaby.

Oh Sally! I'm so sorry I've not been around to cheer you on with this! And, for the record, when I clicked into this thread, Isa's banner came up. Our Angels are indeed keeping an eye on you and hard-headed Frankie.

I can't believe you're going through this, all over again. That video made me want to throw up - I wasn't as smart as Paula and watched it, even if I knew better. And poor Myrtle missing her bestie!

How is Mr. Thang this morning? I'm sure as the others have said, it was all normal post-op yuckiness.

Thank all the heavens for your angel donor - such a blessing!

okay, waiting for an update ...

Teri, the Roxinator and Angel Isa

I'm just now catching up. You stay away for a few days and you miss out on a lot.

Sally, sorry you're having to go through this again. Life is so not fair. But it sounds like Frankie is doing well post-surgery. He's a fighter, that's for sure. Just like his human Mom.

Hoping for a speedy recovery for Frankie. And best wishes for Myrtle too!

Really hoping to hear Frankie is back to himself today!
Glad he ate and is more alert, I would have been frantic too! It sounds like they were right on getting his temp back up.

Yea we all know the Dr. Google search and it never is a good thing when we are already in panic mode-we only read the worst cases scenarios and pay little attention to the rest!

I'm sorry you had to call 2 times to get answers. GRRR
Update when you can.

Breathe my friend.  I know last night was stressful.  Yes, sometimes body temps can lower when under anthesia.  Frankie was in the best possible care that he could have been in last night.  I hope he is doing better this morning.

I loved your pictures that you shared of Frankie & Myrtle.  🙂   And Yay for Myrtle wanting to play.