Tripawd Frankie has second torn cruciate on other leg

we are looking forward to hearing that Frankie is a little more ‘Frankie’ today! 🙏

Anesthesia is tough on us all, we just have to let it run it’s course and some of us run faster than others, so just keep on staying pawsitive with your boy! He is strong like Bull! He is in the best place right now, they will take the best care of Frankie and they will help Frankie figure out where he is going to poo...

sending you tons of love and support, keeping you in our thoughts!

Petra, Super Stu and his Kittens

On July 10/17 I became a Super Tripawd! You can find out more about my Pawrents Allensong but first Check out my 🎗 journey Super Stu

Sally we're all waiting for a pupdate and sending lots of love! Stay off Dr. Google you silly woman!

Geez, sorry I was becoming  a bit of a worry wart last night😣   Yes Paula, things do look better in the light of day!!!

Thank you HOLLY, MICHELLE, DAVID, PAULA, PETRA, JERRY, JACKIE AND TERI for popping in behind my little scared moments!  KNOCK ON WOOD, I've never had surgery before (amd wamt to keep it that way)and was not prepared to know how the anesthesia,  pain meds, etc work on body temperature,  etc.  Having an ex-Vet Tech around like Jackie  sure does help!!!!!!

So, the visit went well.  He wagged when he saw me and thst made me sooo happy❤  He ate some chicken I brought him and that made him sooop happy😁

They had him somewhat sedated with Tramzedone (?)  so I didn't  get to hear his beautiful  voice.  Well,, just once, when they tried to move "that" leg to put on a harness.

So far they've  gotten him up with one Tech and myself holding him with that Help-em-up Harness.  Basically he was mostly using his front leg and we were holding him up to "walk" outside.  No real hopping ability yet and no pulling or trying to walk fast.  No do-it-my-way-Frankie yet.  Anytime we lessened our grip, he just fell to the ground.

Surgeon is still very pleased with the surgery itself.  Said he saw him toe tap "that" leg a couple of times.  He said it just shows him that, at this point his other two legs can't  hold him up and balance him without "that" leg, which, of course, is too early to use.

He pees in the kennel, which I'm  glad he at least does that, but no poop yet.  I really just don't foresee him peeing or pooping anytime soon while being held up on a harness.....which will be for weeks and weeks!

To have the miraculous  gift of this surgery , as well as his regular Vet willing to keep him for awhile.....continue he to shake my head in disbelief!!!

Picking  him up midday-ish  tomorrow to transport to  Frankie's Holladay Inn.  The Rehab is going to stop by and give him a laser treatment.  Have to head to work after that, so if I don't  touch base til later that  night, that's  why.  And yes, he will have a sedative  for the ride!

I have a new "tool" to help me help Frankie that I'll unveil tomorrow....tee hee.....surprises  are so much fun 😎 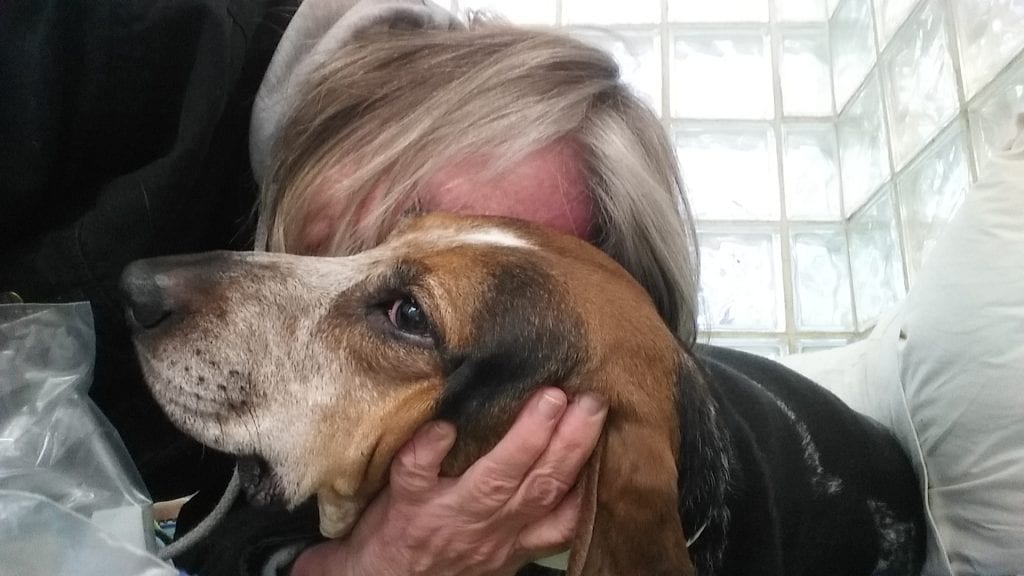 Oh Sally, he looks freaking pawesome!!! Love the videos, he is so happy to see you and he looks strong and alert even with the sedation.

My brain is trying to guess your surprise, lol. I think i might have it but I'm hushing (surprised?!😁)

I have no idea how I missed Jackie's post saying you were on your way to see Frankie and he was doing well until I checked back hours ago. UGH, You know some of us and no updates and the mind whirling!🙄

Never apologize for freaking out Sally that is what you would tell us and what most of us do here:)

Awe Frankie's tail is wagging with his chicken delivery from Mom. He looks good and drugged too.

All the details of pooping and peeing will work out & thankfully he is heading to your Vet they will figure out the how.

Great update and happy to see it!
❤️❤️❤️

Frankie looks awesome.  So glad to see he's learning to rest even if it's the trazadone doing it.  Exactly what he needs now.  Hopefully by the time you get him home from your amazing regular vets loving care the healing will be wonderfully underway already.  So so happy for all the wondrous gifts you're receiving.  May all your Christmas Angels know the appreciation we all have for them! ❤️❤️  It takes a village ❤️  Love you my friend!

I'm still not brave enough to watch the videos, even tho they are good ones. I just like looking at the "still" photos of that handsome dog. Sally, you need to share the story of the amazing photo on high when you were at the vet's office dropping him off - we all need to hear the Warrior Magic at work <3 <3 <3

Keeping the love and positive vibes coming your way as Frankie moves through his recovery period. Hugs!

P.S. Guess who's banner just showed up for me just now!!!! Love him!

So,  Frankie and I were led to the room to wait for the Surgeon.  I sat down and nervously was looking around the room at various pictures,  plaques, etc.  I was drawn to a painting of a dog higher up above all the other things hanging on the wall.   I got chills head to toe and instantly  felt a calm, a peace.

It was a very handsome picture of a Regal Doberman who ooked exactly like Warrior Nitro.   And in my mind, it was Nitro...that image became Nitro.  He was laying in a position  I had seen Nitro in many times in the pictures Paula has shared.  Head held high centered over his long front legs, ears alert,  a strong and noble pose.

Nitro was watching over us.  I truly felt it.  I have chills now just thinking about it.   Yes I do.  Just like when I first saw him in that room.   I can still draw on the peace and calm thst "image" of Nitro gave me💖

not to correct your story, but I'm sure everyone knows you meant to say "regal Doberman"....that's ok, you were just multi-taking, thinking of Bosch the Rottie….

But watch this.  Like magic I can make that "correction" and everyone will wonder wjat the jeck you're  talking about

Ok, so it is not even 6am and you managed to give me goose bumps and laugh at the same time.... "shaking head" I see Doberman... I know Bosch is a Rottie, I also know once I screw up a post that somebody posted after that I cannot go back and fix the damn thing... lol... so I will shake my head, sip my coffee between giggles and try not to choke on it knowing you are all sound asleep

Good morning, by the way. I felt so relieved to actually "see" just how well Frankie looked yesterday. His leg looks great and so does his attitude. I know you are going to be a busy woman today, but I just wanted to post before work and say that I hope Frankie had another good night with no problems.

As long as he keeps eating that chicken and everything else Sally, no need to worry about the number twos... nature is going to take it's course regardless of "his majesties" wishes to choose where, heheh..

Wishes for an uncomplicated, smooth day and journey... plus tons of hugs of course

Hooray for improvement! I don't think I've ever seen Frankie as relaxed as in those videos. I love, love the picture of you and Frankie where you can only just see your hair. Happy to see his mom.

I'm so glad he's doing well and even happier that you have the blessing of the Frankie Hollady inn for his initial healing. I'd be worried about him doing damage to you in trying to get him to poop or pulling some other Frankie hi-jinks.

big, big hugs for you!

Teri, the Roxinator and Angel Isa