This Tripawd Tuesday submission was received from a Tripawds Facebook page fan on December 16, 2017. Read on to see how you can share your story too!

One year ago on December 3, 2016, mourning the loss of one of our fur babies the week before to cancer, we drove to two different shelters looking for someone. We didn’t know who, what age, breed, color, nothing really. I was looking at their hearts, trying to feel that connection, you know what I’m talking about.

That moment came when we were ready to leave, I’d been through the whole place and that spark wasn’t there. I queried a shelter worker, “Is there anyone else?” She said, “Well we had a hoarder case and in the seizure we took 5 pups and the mother, they are all spoken for but two.”

We walked through a maze of hallways smelling like disinfectant, past piles of laundry, rows of buckets till we came to the last door before outside. In the quiet room there were 9 medium sized cages my husband told me later, but I only saw one. Golden eyes looked back at me and he gave a tentative wag. A little Carolina Dog.

There was a huge pile of waste half in and half out of his kennel, he had obviously tried to back away from his bedding and “go outside” of his tiny area. That spoke volumes. His tail was matted with some of it, he was terrified when the door was opened and didn’t want to come out for the worker. 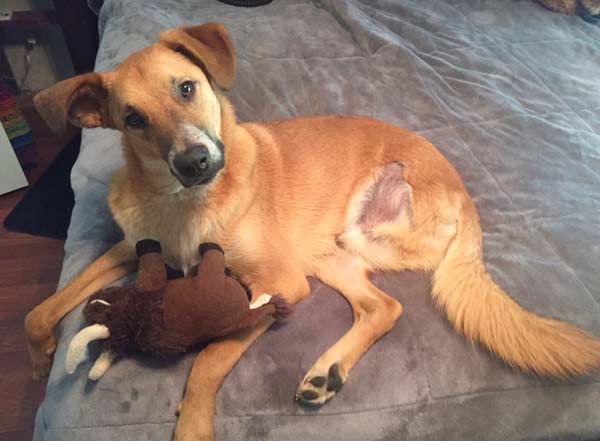 I asked my husband to pick him up and to take him to the outside play area. That’s when I saw the sway in his gait. It was subtle at first but as he started to open up and play, it was more pronounced. His left rear leg was 1/4 inch or more shorter than his right. He didn’t put any real weight on it. I felt a hard ball shaped area protruding into his interior groin area high in his hip/pelvis region. I prayed it was a dislocation. I looked at my husband and said, “If we don’t take him, they will kill him, let’s go.” They wanted me to pay then come back in three days after his neuter. I said politely that, “No, he’ll be leaving with us today, I work for a vet and he’s going to do his surgery. Give me a fax number to send the completed surgery form to.”

His exam showed an old fracture. Old? How old? He’s only 6 months for God’s sake. Puppy bones are not normally fragile and the biggest bone in his body had been broken all the way at his hip. His surgery went from a neuter to a neuter and rear leg amputation. This kid has been worth it all, every tear, every penny, every follow-up, every late night battle with phantom pain.

He healed my heart, I helped him heal from his past, and now his Sway is his name, not his problem. Adopt…don’t shop. 💗

Is your pet a Tripawd hero?