Today on Tripawd Tuesday you’ll be amazed when you read about Rusty. This sweet dog not only bounced back from amputation surgery due to an osteosarcoma diagnosis, but immediately aftward he came down with a rare condition called Trigemanal Neuritis, a heartbreaking situation that manifests as paralysis of the facial muscles. The good news is that he triumphed over that too, thanks to his mom Lori’s amazing dedication. We hope that their story will help someone else who must cope with this scary situation. Here’s his story as told by Lori:

Rusty Loses a Leg to Osteosarcoma

In August 2013 we rushed him to the vet thinking he may have sprain his leg or maybe even broken. The vet said it wasn’t broken possible sprain. He was given a pain med injection. The vet decided it might be a minor break so we scheduled him to get the xray in September, but instead of a break he called me and told me his left tibia was being eaten away by a cancerous tumor called Osteosarcoma.

We were devastated by the diagnosis. We did a lot of research finding that he may only survive a month or 2 with out surgery with surgery 4 months without chemo. He is part of our family so we decided to go ahead and have the amputation done very hard decision. He had the amputation done on October 2013.

The surgery went really good,we went there to get him. He didn’t want to get up when his daddy went in but when he heard his mama’s voice he came to me and very excited. He was able to get in the van by himself and climb up the 2 steps to go into the house. He was Meloxicam and Tramadol for pain and antibiotic he was in pain for a couple days it got better each day. He didn’t want to eat the first day but he started the 2 day. We built a ramp so he could go out to potty. In a couple days he was ready to go walking not far but he was excited to go.

It has been 5 1/2 months now and he is doing great. He gets around on 3 legs great as if he has always had three legs. We don’t regret doing it. It gave him a quality of life he deserves without pain. We hope we have him around for many more years.

I feed four dogs so I am on top of watching them so they want eat each others food, he picked up a mouthful of food and it all fell out he couldn’t swallow it. He was holding his mouth half way open, he couldn’t close it and he was drooling so bad, he wasn’t able to get the food picked up. I was afraid he had a broken jaw or maybe a stroke. Our vet was closed so we had to take him to the emergency room.

They checked him over didn’t believe that he had a broken jaw they believed it was Trigemanal Neuritis and if it was it would get better in 4 weeks. They said to set up a appointment with the specialist so they can do a MRI of the jaw and it would be $350.00 to make sure it wasn’t broke. That morning i called and happen the specialist was there and he got on the phone and talked to me about Rusty’s condition I told him I didn’t have the money for it. He gave me his opinion of what what it could be by what the ER doctor wrote on Rusty’s chart and agreed with her it was possibly Trigemenal Neuritis. So I did my research couldn’t find much.

Trigeminal Neuritis: I research it and couldn’t find much about it, I just read everything I could about it, in some of the research they would say put his bowl higher up so he didn’t have to bend down and it would help with swallowing.

You have to give them water every hour or 2 to make sure they get enough, very time consuming but very important. In feeding him took a little bit more time than usual I had to soak his kibble and when he ate he made huge mess so keep newspaper or cloth under them for easy clean up.

I found info on a sportsman page that his hunting dog did the same thing, he searched too he found putting a band around the muzzle so they can hold the food in so he can swallow. It helped he made a big mess but was able to eat. Their kibble needs to be soaked so its softer for them to swallow, but he couldn’t drink water so I had to try ways to get him his fluids so he wouldn’t get dehydrated. I used a turkey baster and it didn’t work, I tried a water bottle it didn’t work, so I tried a meat injector without the needle and he was able to get his fluids this way. I took the water and mixed it with chicken broth so he would take it and he did.

I took him to our vet after I researched and he didn’t know anything about this condition, I told him what i found and what Rusty needed to get better which was Prednisone for 10 days and ointment for his eyes. It took a little while to see improvement but we finally saw it. During this condition of not using his jaws his lost the muscles and his eyes and cheeks sunk in, it was very scarey but he is filling back in and using his jaw all the time barking and other things he is back.

It took time and he did get better gradually, I used the rubber band everyday for 2 weeks then I used it every other day.

He is doing great now he eats and drink without help, he chews on his rawhide bones with no problems. He loves chasing his 3 sisters and chewing on them playing of course.

My advice would be do a lot of research this condition could of been from a stroke, broken job or other things. They told me their opinion and that’s what I researched. If I had of left it up to the doctors it would of been several thousands of dollars spent on unnecessary test that would of shown nothing wrong. He wasn’t in any pain so I was able to research it but if in pain of course I would of done anything to find out what was wrong. I hope this helps someone else if their baby has these symptoms. Research is number 1. 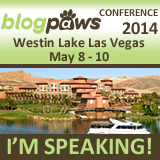 Tripawds is excited to be speaking at the #BlogPaws 2014 Conference in Las Vegas, the world’s biggest & best pet blogging and best social media conference.