His first two nights home were a bit rough as he couldn't keep food down, we were told this was common due to the medicine and if it continued they could give him something for it. We had to return to work his 3rd day home but I had my neighbor checking in on him. When I got home & opended the door he bolted out & down the steps by himself and went about his usual business of playing around the yard as if nothing had changed. He was all over the place & we were scared he was overdoing it. We finally managed to get him back inside. I feel he probably did over exert himself as he did nothing but sleep for the next day & 1/2. Yesterday afternoon we again went out into the yard and he was again all over the place, however this time he made it to the other side of the yard & seemed to get a bit winded so he stopped to rest. I came inside for a split second & when I went back out he was gone, he had made it back across the yard to our koi pond where he was dipping his head & remaining front leg in the water, a favorite past time of his prior to surgery. He can manage far better on three legs then we expected, he did kinda crash into the bushes at one point but quickly straightned himself back out & was good to go. He has been excited to play with our other dog & cat again & it's great to see him wagging him tail again.

Even with carpet runners down he has had some trouble adjusting to the floors & the steps going outside. We have ordered him some Ruffwear boots and think that if he will wear them that will cure the problem.

His incision looks good, we go back for a check up wed. to see if the stiches can be removed. My only concern is that his appitite has  not returned. Prior to surgery his treats were  turkey necks & beef melt bones, this has been the only thing I can get him to eat, along with small amounts of cheese wrapped around his medicine. He has no interest in his dog food or any other food. Due to this he has lost a good bit of weight. He is drinking fine & pottying with no problems. His attitude has been great & he seems as happy as ever. Is this common? We were told that the medicine would affect his stomach so we are thinking once he is off of it his appitite will return to normal.

I have included some pictures below. He does have elevated food & water bowls inside. These were placed outside to try & entice him to come out. Also i hope it's ok, that I posted a photo of him last July , in our garden,as a comparision of the weight lost. I will be talking it over with our vet as a healthy weight for him to maintain now, we are just concerned that he is not eating enough. 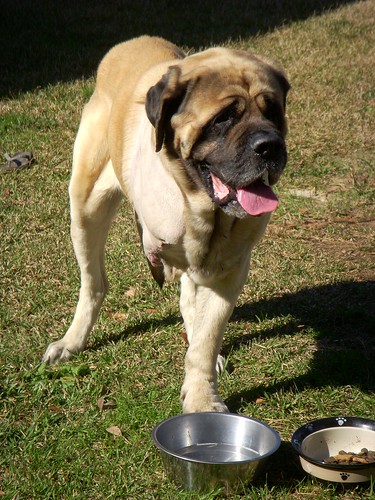 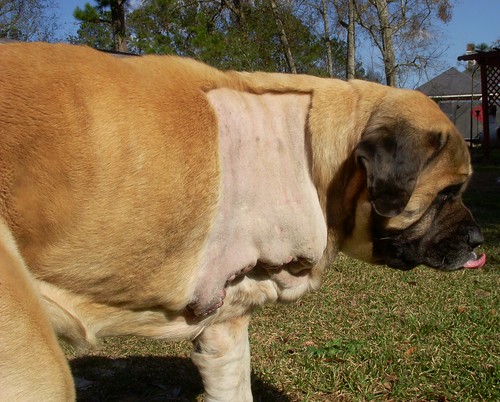 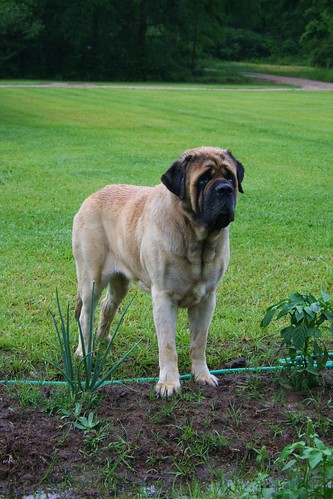 Yes the chemicals will have an adverse effect on appetite. We opted to start the chemotherapy treatments literally hours after the amputation. The first night, Cherry ate well, but as the chemicals went through her system, her appetite fell to zero and she even refused fluids. We resorted to “force” feeding which actually is not as bad than it sounds. She actually was very good about this and did not struggle after the first week. We even went with appetite stimulants which probably helped. She still was not eating on her own when the second chemotherapy treatment was due. This cycle continued until the last treatment, but in each case, her willingness to eat improved as I finished the medications.

We are are still “newbies” to this process approaching the three month post diagnosis mark. Her appetite has not really returned to normal, but with a little coaxing she actually eats more now than before the surgery. While I want to put back the weight that she lost post-surgery, I do not want to put too much weight onto her. As with you, Cherry lost a fore-leg and I do not want to over stress the joints. I actually went to keeping a daily-then week diary so that I could really keep track of her recovery. This allowed me to make true accessments regarding progress/regressions. You can find our diary at http://home.com…..net/~enbba…..ryjourney/.

We all will be pulling for you and keep us posted.

Pony is a very handsome boy!  It looks like he is doing fine, and it is not abnormal for the pain meds to cause some anorexia.  As long as he is eating a little something every day and not vomiting then I wouldn't worry.  I would try to keep him from playing too hard until his sutures/staples come out, because he still has some “deep” healing to do in the muscles.

Thanks for the photos!  Looks like you live someplace warm!

Oh my god Pony is gorgeous. What a sweet boy. I am so happy he is doing well. Titan lost about 17 pounds after his amputation. He was originally 135 and then 118. We did have him lose an extra few pounds to make it a little easier with 3 legs. It looks like Titan, Tazzie and Pony were all right front leg tripawds. You can always switch your decision about chemo since they usually wait about 3 wks after surgery.

Give that big boy a hug and kiss for me.

Oh, that face is soooooo handsome!  What an awesome boy you have there! Have you tried him on any canned foods?  My great dane Nova only had appetite problems for a few days after surgery, and canned food (I feed her EVO) worked well, and sometimes we would wrap little balls of canned food in slices of deli turkey. The only trouble is now she STILL demands the canned food (3 months later) $$$$$$$$

It sounds like Pony is getting around great. I tried the boots with Nova but she absolutely hated them, so I had to return them. Perhaps I didn't have the patience to wait for her to get used to them, but she looked so miserable in them I gave up.

Please continue to keep us posted.

Dane Mom Sue at nova.tripawds.com and Mom to Beautiful Great Dane Queen Nova, a Blind Tripawd, who kicked cancer's butt from 11/08-03/13. The Queen is Spirit Nova now, but her legacy lives on here at Tripawds!

I am in love with your sweet boy Pony, he seems to be doing well. Paris had an appetite but had some nausea after her first chemo so we gave her boiled chicken. She is a Lab, so she eats about anything, she loves cucumbers, carrots & green beans. Try all his favorites and like Dr. Pam said as long as he is taking in a little bit his appetite will come back especially as he starts to heal and is on less drugs.

I'm glad for you that his surgery is done and you can move on to the next chapter. Paris had her surgery on Jan 5th and we actually had enough snow melt today we took her for a short walk down our street. Yes, it looks like you live somewhere warm!

Grateful for every moment we had with Paris…..no regrets!

Honoring her life by opening our hearts & home to Addy!

What a beautiful boy Pony is. Sounds like his recovery is going well. That is so wonderful for both of you!

What a beautiful dog-  we did what Sue did when Wrigley’s appetite was not so great right after surgery and gave her some canned food. We did not feed her wet food before, but have started since. She gets the canned EVO  mixed with her EVO kibble. She also loves those  Bil-Jac liver treats. I gave her quite a few of those when she had appetite problems.

We also did boiled chicken and some good ground sirloin at times too.

Wrigley’s appetite was much better after those 2 weeks

Hi MastiffMom and Pony and family,

What a beautiful boy! It sounds like you are all doing a terrific job! Elko and Pony may have had their surgeries that same day (Feb 2?) so we're right about in synch on the recovery journey. Elko also is up and about now and doing amazingly well on his three legs. (He lost the left rear.) He gets around the house and out to potty very well and is already back to checking out the interesting parts of the kitchen. (He has history of highly sneaky countersurfing.) I loved hearing about Pony in the pond! And I know exactly how good it felt when he wagged his tail and greeted his dog and cat siblings. We too have had to do lots of encouragement when it comes to eating. Elko's always been picky and loses weight quickly when the routine is upset. (As a strapping young man, he was 140 lbs, then over the years he's dropped to 125; now, he's 115). We've been trying smelly stuff, like salmon and sardines, with some success. Also, he likes fruit and veggies like bananas, carrots, sweet potatoes and squash. I roast them with olive oil and a bit of salt and that sometimes works. But it's tough, when they won't eat and they need to get their strength back. Good luck and sending good vibes–we'll be thinking of you as we hop about..