I adopted a senior tripawd on February 1st of this year. He is a min pin mix and just the sweetest dude. The estimates on his age range from 8-14, so who knows! I usually say he is between 10 and 12. A little background on my sweet Rex and how he came to be part of my family.

Toward the end of 2018, I started thinking about adopting another dog. I knew I wanted a senior, as my schedule doesn’t allow for all of the time puppies require. I also have a soft spot for those old babies who get overlooked and knew I wanted to give an old dog a good life. At the time, my dog Rusty was 15, and we had just gone through a major health scare. My fears of losing my best friend and thoughts of walking into a house with no dog after so many years of being greeted with love and excitement was terrifying. So I started to look around a local shelters to see if there was an old dog that needed a good home. It was difficult to find a dog that met all the criteria, as I also have 2 cats and work a second job that will allow my dogs to come with me. I had to find the right dog to fit the bill. I looked for several months but wasn’t finding the right fit. At the end of January, I found a rescue outside of my area who had a handsome little min pin mix who had recently had his front leg amputated. I read about him, called and talked to the foster family, and couldn’t stop thinking about him, or reading articles about what to expect with a tripawd. I called my sister who is a vet tech, and she gave me more info. I filled out the application, was approved that day, and the next day Rusty and I took a two hour road trip to go meet Rex (Buster at the time). We all hit it off immediately. There was no doubt in my mind that I had found my newest family member. His foster family knew it too, and he went home with us that night. With the exception of a few days of arched backs and some hissing from the cats, things couldn’t have gone smoother. Rex stepped into our lives like he had always been here.

It wasn’t until a month or so after adopting him that my boss asked if I would write a short story about how Rex lost his leg, and about the rescue to try to get some donations for them that I really dug into what led to his amputation and surrender. I knew he had been hit by a car, but that was the extent. I contacted the director of the rescue and she shared all she knew. After Rex was hit by a car, his owners took him to the vet. It is unclear how long they waited after the accident. The vet informed them amputation was the best option as there was too much nerve damage and the leg could not be saved. Again, unsure on the timeline, he was at some point taken to the local animal shelter, where he was given the name Buster. They were unable to address his medical needs, and contacted the rescue. They stepped in and took over his care. He was taken to a foster home the same day he was saved from the shelter. The foster family had to help him gain weight in order to be healthy enough for the surgery. Once he was in better shape, they were able to amputate his leg. They also neutered him. The foster family helped him heal after the surgery and went about finding him the right home. I still stay in contact with the foster mom and thank her on a regular basis for allowing me to bring Rex into my home. I love that little dude like I have had him his entire life.

I worry on a lot of days that I won’t know how to help him if he is struggling with the issues that can come along with having his leg amputated, which is how I found myself here. I’m hoping I’ll gain some insight into what to expect and some tips and tricks to make his life the best it can be. Thank you for letting me share our story

Hi Rex and family, welcome! We are so glad you decided to adopt this sweetheart, thank you. And we are super hoppy you joined us here, we look forward to following along with his adventures.

He is a lucky boy to find his way to you. Clearly, a match made in heaven.

Meanwhile, if you haven’t already, I encourage you to take Rex to get an evaluation by a certified canine rehabilitation / physio therapist. These folks can let you know about Rex’s strengths and weaknesses, and what you can do to keep him injury free for as long as possible. Then you don’t need to worry about how to help him as he ages! As a bonus, you can take advantage of the Tripawds Foundation Rehabilitation Therapy Reimbursement Program, which may reimburse you for your first rehab visit as long as you follow the guidelines.

Also, be sure to check out our e-book, Loving Life On Three Legs , which is geared toward dogs who are already amputees. It features many of our best information from the website and has lots of tips about keeping a Tripawd fit. Also, don’t forget to check out the Tripawds Gear blog , and Tripawds Nutrition blog for even more ideas.

Here’s a post about adding images to the forums. Let me know if you’d like help, we would love to see your boy!

Thanks for the warm welcome! I’ll be sure to look into all that you’ve suggested. And I’ll get some pics of this cutie up as well.

Such a heartwarming story❤  Rex certainly  hit the Puppy Lottery when he found his furever home with you and Rusty!  Can’t  wait to see pics of your family 😎

Ypu xan check with your Bet about supplements to support joints and help keep arthritis at bay.  Dasaquin, or Wellactin, or Cosequin are aome good starting points  to check into.

Looking forward to following  Rex on all his adventures in this wonderful  home you are providing.  It’s  so much fun spoiling  a tripawd😎

My current Tripawd seems to have hopped a similar road…although she was 7 months old when she lost her leg.  In fact, we are coming up on her 4 year ampuvarsary.  It’s unclear to me how long the people who owned her at the time of her accident waited to take her to the vet or turn her over to the rescue.  The rescue had a picture of her in a cast posted on their FB page. I kind of don’t want to know the details- I think she was hit by a car in mid July and had her amp the first week of August!

How is Rex around moving cars? Elly was afraid of cars for several months after I adopted her.

I love that you went looking for a senior! My quad Pug boy Obie just turned 13, I really love this part of his life.

I started Rex on Cosequin as soon as he came home. His now 16 year old brother Rusty takes that as well as canine CBD oil, which has truly changed his quality of life. Rex doesn’t seem to be nervous around cars at all. He is also a huge fan of going anywhere, but especially to my parents house where he can sit in my mom’s lap and be spoiled! I’m still trying to figure out how to upload the pics, so hopefully it won’t be too much longer. I think I might have to dust off the computer for this one!

You are so good to Rex and Rusty. He’s SIXTEEN? WOW! Very cool. So glad you found a combo of supplements that help.

As for photos, you can do it on your phone too, the process is the same. What first needs to happen is you need to upload them to either your own Tripawds blog (supporters get lots more storage space), or a website like Imgur.com. Once uploaded, copy the Image URL, return to the forum post and past the URL in. The photo should automatically appear. Does that help?

Welcome. It’s great to read about older dogs getting their forever home and family. Our story is similar to yours as Maggie was hit by a car and tied up in a backyard. Long story short, it has been just over a year since the amputation and being adopted into our family. Maggie is 4 1/2 years old and is doing great. We cannot imagine our lives without our Maggie.

Continue to read and take in all of the information and support that is available in the site.

Well shoot. I thought maybe I had figured out the pic thing. I’ll keep trying, lol

Well, I’m kind of figuring it out…what size should I change the aspect ratio to? Thanks!

BTW, this was the morning after his first night with me. He was in the back bedroom watching me get ready for work. He didn’t know he was going to get to go with me yet!

A techie will come along and tell you how  do the “ratio thing”  (whatever that means).

In the meantime, I was able to see that adorable  picture just fine!! Love it!!!  Especially  knowing  the story behind it😎     Soooo sweet😊

rexy19 said
…what size should I change the aspect ratio to? Thanks!

You can use whatever size photos you wish. They will be automatically resized upon upload to your Media Library, and sized to fit when shared in the forums. 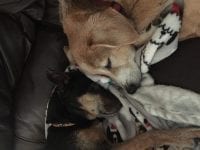 Rex and Rusty and their never ending pile of blankets!