I hope someone can help me.  My RikRak has a rash that this morning looks like a burn on his tummy.  He goes to physical therapy every week and his doctor has him on an antibiotic for it.  The doctor thinks it's from not getting out of the spot quickly enough after he tinkles.  When he is home and not at therapy I wipe his tummy with diaper wipes after every trip to pee.  He also this week developed an abscess right above the elbow on his remaining front leg.  He is also on an antibiotic for that.  Last night it seemed to get huge so I sat with an ice pack on it.  Swelling went down and it eventually burst on its own and he certainly seems to feel better.  It is still draining today, so I'm keeping it clean and as dry as I can.  Any other advice anyone can give me?

Can you take a photo of the belly burn? That would give us Dr. Pam some ideas that may help you describe it to your vet.

As for the Hygroma, see these Tripawds Gear blog posts for ideas:
https://gear.tr.....?s=Hygroma

I am trying to figure out how to post a picture.  I'm not too savvy.  It looks like a sunburn kind of.  I'll keep working on it!!

Hi Leslye!  To post a photo, it has to be hosted online somewhere.  Some of us started free Tripawds blogs for that purpose, but if you have a social media account, that should work too.  Right click on the photo, copy image address, and then paste directly into a post.  You should see the photo once you do that.  I hope this helps! ~ Stacy (Griffin's Journey) 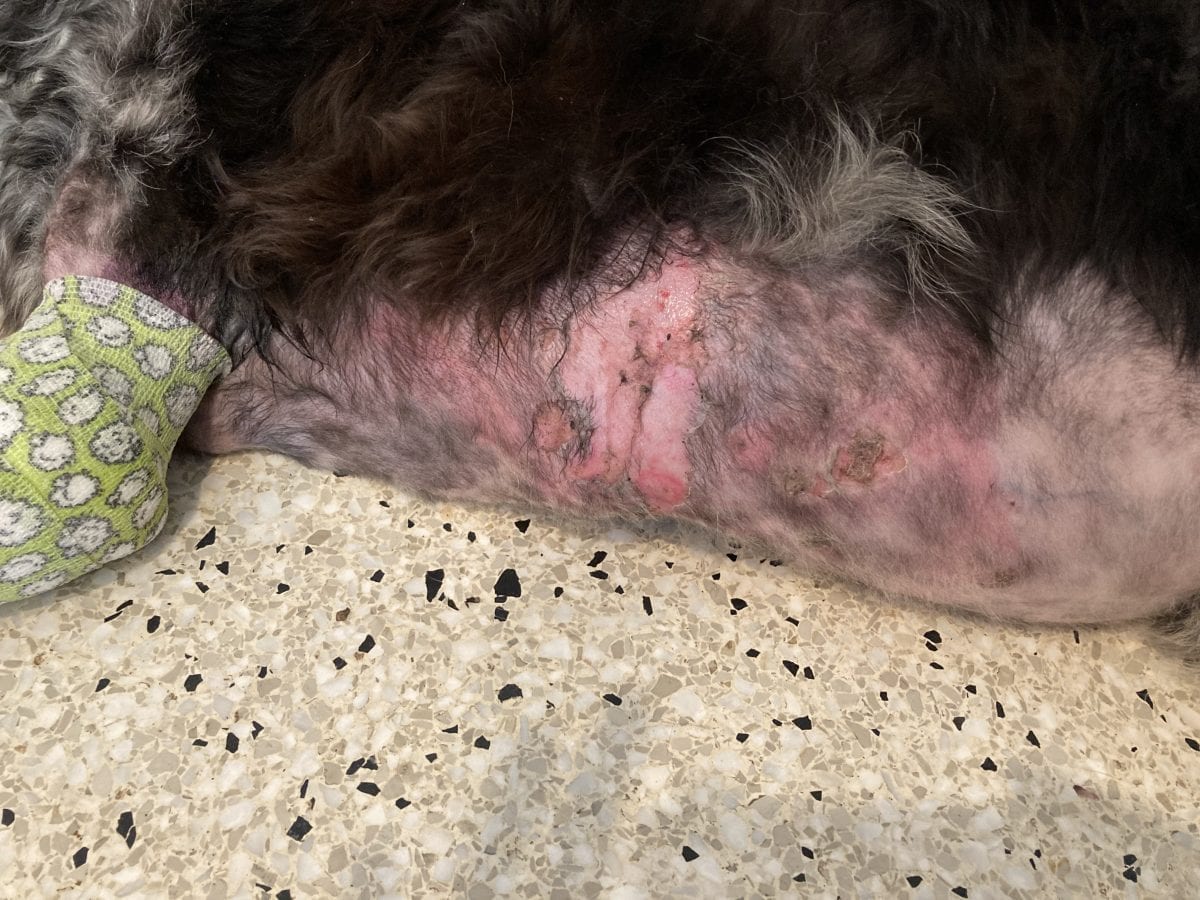 Awww poor baby! That looks so irritated. Did the vet do any kind of scraping to see what kind of bacteria is there?

I'm sorry, I have no clue so I'm hoping Dr. Pam might have some ideas for you.

Yay that you figured out how to share photos!

That looks pretty serious; does the area on his belly feel swollen like that might drain also?  Which antibiotic is he on?  You can use a medicated chlorhexidine wipe, mousse, or shampoo topically to help reduce bacterial counts and I like SSD (Silvadene) topical cream for some of these infections.  Was your dog's leg amputated due to cancer? How long ago?

Thank you, Pam!  RikRak is on two antibiotics at this time.  One is Clavacillin and the other is Simplicef.  RikRak's leg was amputated on March 10th resulting in an injury to his "elbow."  It did not heal and got worse and worse over time. Once we amputated he has done so much better.  He started physical therapy the latter part of May.  The doctor thinks the rash is a result of urine and not moving out of the way after he urinates.  This weekend I haven't put his harness on him one time, just hoping to get this rash healed.

His abdomen does not look swollen and nothing looks like it could drain.  It really looks like a peeling sunburn to me.  He is also on prednisone and tramadol.  The doctor had to put a stitch in his remaining elbow where he has walked on it.  That's what the pain medicine is for.  The prednisone is for the neurologic inflammation on his shoulders from being lifted with the harness.  To be clear, that's what it's for.  I'm the one assuming it's from lifting with the harness.

If it is in fact urine scald then the SSD cream can be quite helpful; it is often used to treat burns and is quite soothing.