Wooby Woo got found out once more!!

I almost forgot to post this, but I guess the world needs to find out…

It’s not that I don’t have enough on my hands at the moment and then, the other day,…

Manni and I were out for the last walk of the day at around 10 pm and I come to find this:

Now, at first I thought these cute little creature were apparently abandoned (by a main road, nonetheless) by evil, vile people. So I didn’t let Manni give chase but tied him to a gatepost (learned that from Frankie…) and tried to catch those poor things. Didn’t work, so I went to get the boyfriend and his fishing gear (yes, really). From then it only took us ten minutes to get those very cuddly little things.

Now, all of a sudden, it dawned on me: those bunny wabbits let themselves get caught faaar too easily!! that could only mean on thing:

they were Wooby Woo’s spies and miniature terrorists!!

I was certain that they were sent to eat and destroy our, um, Wifi cable!!!

so instead of welcoming them into my home I made sure they spend the night in the garage, confined! Ha! I’m no dummy!! 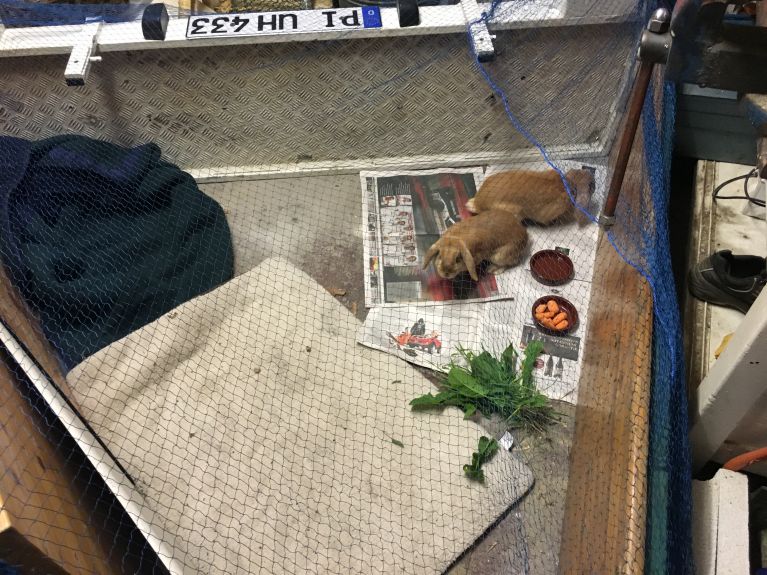 (As you can see, Wooby, I did make sure your spies wouldn’t starve. we Germans are hospitable people after all…)

And then, the next morning, I made sure they couldn’t wreck havoc anywhere near here and I got my neighbor’s cat basket… 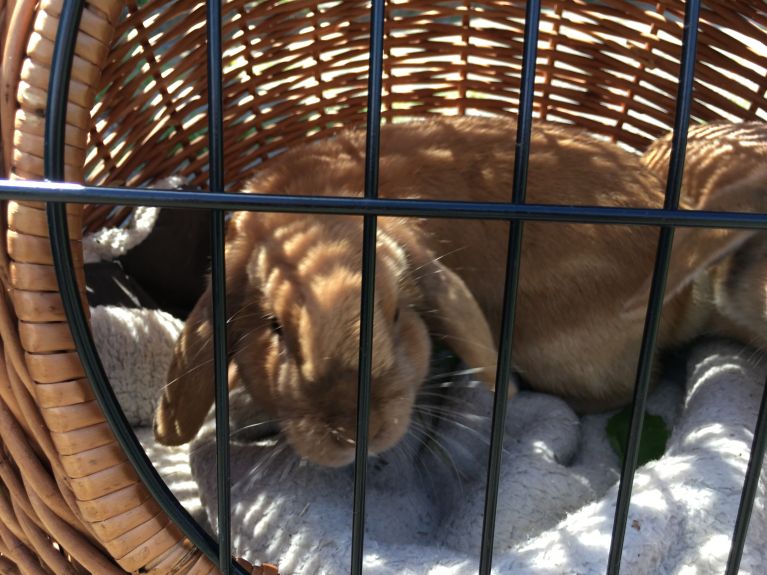 …and took them to the local shelter!!!

And that’s where you can go to pick them up at!!

There’s no fooling me, Wooby! You hear!?!

(The boyfriend named them Bimmel and Bommel, you may want to ask for them under those names…)

I love how creative you got as far as catching them….the gate post trick, the fishing gear and the boyfriend!!

Bimmel and Bommel!! Are you sure you don’t want to take them home?? After all, the boyfriend has clearly already bonded…..on second thought…Manni would not like being tied to the gatepost 24/7 🙂

And yes, you gave them a wonderfully temporary safe house! It’s hard to believe someone would just discard them like that. They could have escaped, but most likely abandoned. And they certainly would not have made it very long with everything out in the “wild” (and that includes you Mr Manni!)!

Thank you for rescuing those little rascally spies and trying to get them home.   You did awesome 🙂

OH what a great story! I love that Manni even allowed you to get close to those sweeties! You both have hearts of gold.

I love how creative you got as far as catching them….the gate post trick, the fishing gear and the boyfriend!!

Bimmel and Bommel!! Are you sure you don’t want to take them home?? After all, the boyfriend has clearly already bonded…..on second thought…Manni would not like being tied to the gatepost 24/7 🙂

Ditto!! I know the RubyRoo is always working behind the scenes here;) I am certain she will post on this 🙂

I think they are adorable!! I cannot begin to understand evil, vile people letting them free! Oh they will get theirs one day!! We may not see it but they will!!