Meg and the shed

Well I don’t know whether Meg’s success in the Great Bloomers Referendum has gone to her head, or perhaps it was the entire Camembert she found on Hampstead heath yesterday and troughed before I could wrestle it off her; whatever the reason, something has got into Meg.

Last night, at about 11pm I let the girls out in the garden for a final pee, but when I went to call them in, only the Pie came back. This is not altogether unusual. I called Meg again and tried to bribe her with chicken, which usually works, but no sign. So I went back in and got a torch, and shone it all around the garden, but no sign of Meg at all. Now, even though I know the garden is secure, that it is physically impossible for Meg to get out, I also know that Meg has a way of confounding the laws of physics. I was starting, if not to panic exactly, to stress at the very least. She wasn’t there. She had to be there. But she wasn’t; she really wasn’t. I walked all around the garden in my pyjamas, checking every corner again and again. No Meg. It was impossible, but she really wasn’t there. Now I did start to panic.

Then I heard a sort of muffled thumping coming from somewhere high up at the back and I shone the torch up, and there she was, lying there on the roof of the shed and so pleased with herself her stump of a tail was thwack thwack thwacking against the roof. At the lowest point the shed roof is maybe about six feet off the ground. It’s not unheard of for Meg to scale it. Years ago, she occasionally used to climb up to enjoy the afternoon sun, which catches the slope of the roof. But we’re talking five or six years ago, long before she broke her leg, let alone lost it. It never occurred to me she’d even attempt to climb on that roof again.

I rushed inside and fetched some steps. I was terrified she would try to jump off, but having achieved her ambition of scaling the roof, it was clear she had no intention of ever coming back down. In the end I had to physically lift her, legs locked, like a disobliging coffee table, down the steps, and carry her up the garden.

Today the shed is coming down. There’s me fondly imagining I’ve got a tripawd-friendly adapted house , I’ve got steps up to the sofa for heaven’s sake, and she’s jumping on top of the shed!

The pic below is from years ago. I didn’t take one last night for obvious reasons… 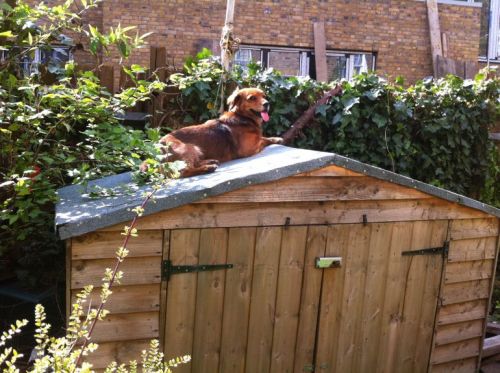 PS Now the snow is supposed to be coming. If it does, I think Meg might just literally take off and fly.

Meg must have her garden Everest!!! Building Meg steps is better than tearing Meg Shed down. I mean, honestly, MEG!!! SNOW AND SHED?!? The perfect storm there, Meg!

You underestimate me, CharlieBear. I offered Meg steps, but she turned up her nose. If we built steps then Elsie Pie would be able to climb Mount Meg as well. The whole point is that nobody else can get up there and Meg can look down on us all, as she loves to do…

You CANNOT be doing these Cirque du Soleil tricks, my girl 🏁🔙📯🔝🎏🔛🎭🎪

Think about your legless condition Meg 🕳

You don’t need you leg, you say?

But how would you jump down from there without hurting yourself 🚑

Oh, your mom got it right.

You’d fly just like Eurydice, you’ve seen the pictures, have you?

Thanks, Teresa, for your support. Meg says that if Eurydice came round she wouldn’t need to fly. Eurydice would stand beside the shed and Meg would step off it onto her back. And how would you get off her back? I said. She’d lie down, wouldn’t she! said Meg, and then I’d step off her, what do you think!. I’m sure Eurydice’s got better things to do than serve as your personal lift, I said. Like what? she said. Like her Grand Tour, I said. Like completing her travels! Whatever! said Meg and she rolled her eyes, like she always does when she’s beaten.

O. M. G.!!!!! My jaw dropped when I read this. I cannot even imagine the panic of first not knowing where she was and then seeing where she was!!! Only our Meg! Amazing!!!

I recall when Shelby was newly a tripawd and she was banned from ‘jumping’ up on anything but hated being crated so I put the crate and a big barricade around the couch, allowing her to roam free in the apt. Well come home and somehow she was on that damn couch. Crate and barricade still in the same places. Where there is a will, there is most definitely a way!

And the time Shelby tried to ‘tunnel’ out of my bedroom (locked her there for the same reasons as above) knowing the bed was too high for her climb. Came home and she was in the living room – looking proud and the door, well safe to say, I am not getting my deposit back.

I think Meg channels her ‘inner shelby’ on a daily basis.

alison with spirit shelby in her heart (and little jasper too)

Oh Meg! I missed that your mum did bring steps to you and you refused that pesky contraption! You really do know how to fly!!! Poor Elsie Pie and the rest of the crew have to use steps to obtain your vaunted heights! Meg, pssssssst, your mum won one when she carried you off Mount Meg…don’t let that happen again:)

OMD Laughing here.  Only Meg could do this.  Megastar you my girl are one in a million.  Did you need to see the stars from a closer view there girl?  Sorry Meg but on this one I have to back your mom up.  The shed must come down.  At least there’s some good to come out of this last escapade.  Elsie Pie didn’t tattle to mom she made her find you all on her own.  You owe her one 😂

Maybe she is using the sticky prickly things in her bloomers to climb up, kind of like mountain climbers use spikes to move up the mountain?

Oh Meg, you and Purrkins need to talk!

I can totally relate to trying to make everything safe and they outwit us non the less.

Its a doublesword ,heartwarming and proud that they still think they can just do and they do!

But its also a what in the world are you thinking and terror for us moms!

Purrkins insists on climbing our kitchen cupboards. Up the the counter, up to the fridge and then up to the top of cupboards 👀

Going up is not a problem of course ! The down😱

We had to make a temporary door to keep him safe when we are not home and at night. Much to his disgust😾 I can’t take our cupboards down or I would do the same hence the temporary door.

Your climbing sheds and Im climbing the cupboards

otisandtess said
Maybe she is using the sticky prickly things in her bloomers to climb up, kind of like mountain climbers use spikes to move up the mountain?

otisandtess Moral of the story – we might think we are in charge, but they know better.

The shed is gone. Thankfully, it snowed today so Meg was happily diverted. But there will be repercussions, I know there will. Meg’s not one to let things go.

Alison, I cannot BELIEVE Miss Shelby tunnelled out of the bedroom as a rookie Tripawd. Just amazing, that girl had serious spirit! And Christine, I just LOVE the description of Otis and Tess collaborating to set her free so they could lie together. We had a story here about a dog called Red, a lurcher as I remember, who was a resident in Battersea Dogs Home (a rescue centre), and was letting all the other dogs out of their kennels. In fact…. I am going to see if I can find a link. Okay, watch this. You will LOVE it:

And as for Mr Poppet Purrkins, I looked at the pics on your blog. Just amazing! I am DEFINITELY not letting Meg see that. She doesn’t need any more ideas. As you say, it’s not the going up so much, it’s the down… It is wonderful though to see how Purrkins is truly thriving

It just melts my heart to see how happy they were and how they helped each other…..kinda bittersweet. No matter what, those dogs had some glorious moments thanks to Red!!!