Now that is a GREAT idea!

As you can see, Teo has been practicing for years.  He's about 14 weeks in this photo (yes, he's big boned!) and about 1 hour from successfully shredding the piggy for a pulled pork sandwich.

Teo would love to spend a few moments showing that cursed purple freak just what happens up here in Montana. 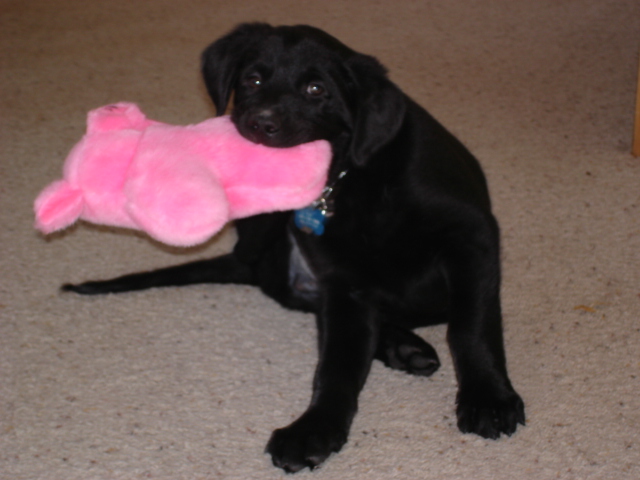 Oh YESSSSS! Teo would be perfect!

Question regarding the Barney Chronicles (the amazing journal of his adventures).  Is it possible to get the entries on the forum or his blog?  I tore through them and the stories, adventures and photos are amazing.  Learning everyone's stories was great, especially those that Barney was with when a tripawd took his or her walk across the Rainbow Bridge .

I have been working on my entry for a few days and need to put pen to paper and find the appropriate pictures to use but the other entries were so amazing that I thought maybe they could be shared by all.  Just a thought...

The purple bugger has had fun in Boston, but its just about time for him to travel on.

lupedog28 said
Is it possible to get the entries on the forum or his blog?  ...the other entries were so amazing that I thought maybe they could be shared by all.

Not exactly sure what you mean...

The KillBarney Blog includes announcement posts with links to posts from all tour hosts who have shared more details photos and videos in their own blogs or the forums.

If you are referring to the actual handwritten entries in the journals that travel with the Barnies on tour, that is a book project in the works and no, those are not available online. But if you mean the stories others have shared in their blogs after hosting Barney, then yes. You can also find links to every stop on the KillBarney Tour Map.

Jill and I think two things:

a- Barney has never snuggled with a kitty before!

b- Barney has never been to the big apple!!

WOOOO HOOOO! Oh Rica & Jill I'm so glad. I know you will show him a GREAT time!

wooooo hooooo! oh yes we will!

Rica, this is the Forum discussion where we tell current hosts to go look to see who wants him next. We go in the order of postings, so it looks like you'll probably be next!

P.S. If you happen to take him to the top of the Empire State Building, be sure not to let him slip off OK?

If Barney had visited us while Shelby was still here on earth, she would have ripped him to shreds in 5 seconds flat; thankfully, her fur-siblings (Labbie Kona, golden Phoebe and golden mix Farley) would show him a little respect.

So our question is this..............does the Tripawd hostess still need to be on earth?  Spirit Shelby's siblings said they could take him to Disney World, Universal Studios and all the other over-the-top-garish-to-the-max *attractions* that we have here in Central Florida.

They also could take him possibly on an airboat ride so he could meet a gator face to face.  And our friend could put him on the back of a motorcycle and take him to the beach.

And last, but certainly not least, he could have a fun filled day at Hip Dog Canine Hydrotherapy & Fitness, Spirit Shelby's favorite place in the world.

I would say Sassy & I would take Barney but its pretty boring where we are and we don't do much.  But if you would like we could possible figure out a day to go to the Omaha zoo.

shelbysmom said
...does the Tripawd hostess still need to be on earth?

Barney has brought smiles to the homes of Tripawds who have passed in the past, in fact he just left Lupe's pack. Bernie Bin Laden nearly tore him apart, long after Maximutt left this earth too. Where he goes, is up to the current host.

We understand he's already on his way, so stay tuned to find out where he lands next!

Michelle said
I would say Sassy & I would take Barney but its pretty boring where we are and we don't do much.  But if you would like we could possible figure out a day to go to the Omaha zoo.

Oh my gosh Michelle, Barney has plenty of backyard adventures! Sometimes he never gets outside the house, really! So sign up today, I know he would love to visit you and Sassy!