Cheese on the floor! No problem! The snapping jaws of the GATOR at work! GULP!! 🙂

Can’t believe I just found this forum thread….I saw the blog posts, but missed this. I blame it on work! So happy for you guys, he sure is beautiful. I believe there were 7 paws that pointed him your way….

He settled in nicely for night #2.  Wants the physical connection of touch, but doesn’t crowd me at all.  At one point, I was sleeping on my side and his chin was resting on my hip – he’s that big!  Enzo the cat slept with us for a while – not yet cuddling Gator, but feeling like he can get closer.  Clearly recognizes pizza and chips, no real reaction to grain free dog treats – pretty sure there was a family with kids in his past.  Getting better with “come.”  Follows me around like a shadow, but doesn’t seem as hyper vigilant.  Heard him bark for the first time – a nice deep woof.

Piecing together his backstory – his medical packet shows normal annual check-ups since 2014, all at the same vet.  His certificate to allow him to cross state lines and the lead you see in his getting ready to transport picture are from that vet, and their webpage shows active rescue work.  I am wondering if he is a foreclosure dog, or some similar circumstances, and the owner surrendered him to the vet for reforming (and not to a shelter).   By the way, yesterday I realized that he was wearing a paper collar with a hand drawn heart, his name and “Op. Res.”.   Operation Rescue?

Angel wings – he does have noticeably lighter, almost white, fur on his shoulder blades.

Yep…angel wings. I think of them as a sign that your angels sent him.

Do you think it’s possible to contact the vet where he had his medical care in the past to find out more about him? I would have to imagine that they would be very happy to hear about him. And fortunately, there are no medical privacy laws that would prohibit them from telling you about his past.

I love that he’s already settled in on the bed. It doesn’t sound as if it will take very long before Enzo decides that it’s fine to have another warm body to snuggle with.

Love hearing these Gator stories! And yes, he is certainly just about the biggest Lab I’ve ever heard of. We thought that Ollie was big at 90 pounds! He looks like he fits his frame without any excess, though. Just simply a BIG boy.

Yes, I don’t think he is overweight, just big.  I’m not even entirely sure how much to feed him.  I’m giving him slightly more than Otis got and he seems fine.  My vet sees him on Tuesday, so I will know for sure.  I am tempted to do one of those doggie DNA tests.  With Otis, the Dane part was obvious in his body structure and appearance.  With this big boy, I am seriously wondering Irish wolfhound?  Something about his legs.

I was was actually thinking about sending a photo down to the vet so they know he is happy in his new home, although I bet the lab rescue has already done so.  I sent them a couple that they could use on their website and relay down the chain of drivers.

Yea can’t imagine a lab being that big with just lab alone in him.  Max was 110 pounds and I thought he was huge with his long legs and huge big head.  Gator sure doesn’t look overweight just very muscular.  Are his ears as soft as they look?  I just love stroking those soft lab ears.  Bet he’s loving the cooler Illinois weather too.   So nice of you to share your happy happy homecoming pictures with the rescue group Christine.  I’m sure it’s gratifying to them to see such a wonderful happy ending as this one.  Happy happy update!!

How wonderful this is all sounding – so delighted Enzo is getting interested.

On October 27, 2016, nearly 6 months after amputation, and 18 months since his cancer likely started, we lost Pofi to a recurrence of Soft Tissue Sarcoma in his spine quite suddenly.  His Daddy and I miss him terribly along with his canine sister, Mia, and two feline siblings, Lucia and Cliff.

Sitting in a car on the way to dinner, wearing a black evening gown and realizing I have yellow dog fur on it.  Yellow, must remember he is yellow.  Not that black dog fur would be appropriate with the outfit either . . .

He is doing well.  He loves critters, and spends time running back and forth around the gazebo – I think there are chipmunks under there.  A bit problem if he sees a squirrel or rabbit when we are walking.  I am just not strong enough to control 125 pounds of raw force.  I have finally found a treat he likes (the stinky liver treats I used to give pills with) and today we made real progress with “come,” even interrupting critter patrol to come get a treat.  And yet he clearly knows that the cats are part of his pack, and are not critters.

Got his Village dog license today, so he has his first piece of bling.  To the vet tomorrow.

Still miss Otis and Tess, but Gator’s presence in the house feels right.

I was in Florida all weekend and without my computer, but I did see your blog post with Gator’s pictures.  He is absolutely adorable!  I had tears in my eyes when I saw him.  What a doll.  I’m so happy for you & your daughter, and the fur babies, too.

My friend that I was with this weekend does dog transports.  I’ve been with her on a couple now, and yes, it’s great!  She helps to arrange transportation for dogs from all over Florida to wherever.  And makes great friends along the way.  She was telling me about a dog they recently sent all the way up to Ohio.  Even a semi driver helped out

Murphy had his right front leg amputated due to histiocytic sarcoma at 7 years old.  He survived 4 years, 2 months & 1 week, only to be taken by hemangiosarcoma at 11 1/2 years 6/12/17

It’s amazing how quickly Gator is adjusting to his furever home. It’s as though he knows this is it! He can relax and feel confident that he is home and will NEVER be given away again!

I also love the visual of Gator wanting to “snuggle” with you resting his big head on you! And the fact that he feels the cats are part of his pack, and he part of theirs.

As far as the dog hair on your dress…….. 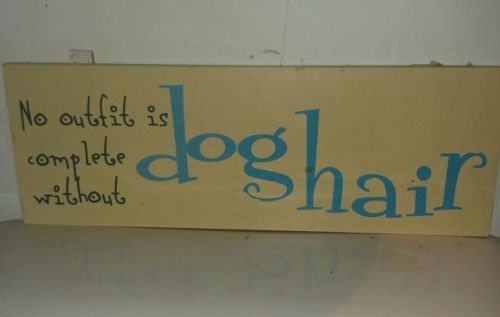 PS…Hope you connect with Gator’s previous Vet and get more backstory. And I agree, I think they would also love to hear from you AND to know how happy Gator is…and will continue to be!

I am so very happy for you Christine.