You know on Facebook, when it sometimes brings up posts from a year ago? Well yesterday this popped up in my feed. This time last year, Meg spent a month with an external frame attached to (through) her leg in an effort to get it to heal. She missed the Autumn totally and I remember feeling really upset because Autumn is Meg's favourite season (mine too) and she couldn't enjoy it at all and it was far from clear at that point that she'd get to see another. I think she looks so wistful in this photo, looking out of the window at the trees full of squirrels and the pheasants going past and everything she wasn't allowed to be part of... 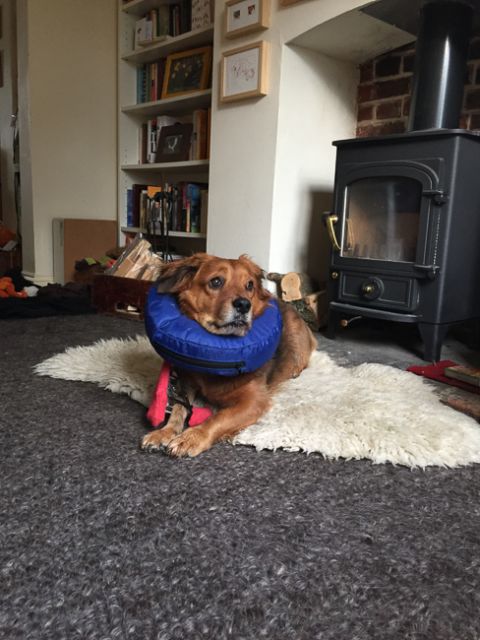 Fast forward a year and the frame is gone, so's the leg, but Meg is very much here, and boy is she ever making up for lost time! I am, of course, only too aware that there will be many for whom Facebook brings up posts of dogs who are no longer here to share the joy of Autumn. Please know that, even as we celebrate, you are very much in my thoughts.

I think your insight into Meg's thought bubble in that photo is spot on! And now she is wrapped up in a thought bubble of unbridled joy and boundless happiness!! 🙂

I love how she's shredding THE bark off the branches really showing them she's boss!

And Elsie, you absolutely crack me up!!!

Thanks so much for bringing us all so much fun today! We needed smiles!

Wow!  That poor little girl went through so much.  It must be such a relief now that she is able to run and play as a Tripawd!

Holy moly, look at what a new dog she is, I LOVE the video!

Thank you so much for sharing what time and patience, courage and pawsitivity, can do in one year. Meg's story shows the world that there IS hope in even the hardest situations. You just have to find it within yourself to B E L I E V E. Kudos to you and the pack for coming through such a ruff time, stronger and better than ever!

I think you need to send that video to Wikipedia so they can use it for the definition of JOY!

The difference between the 'before' and 'after' is stunning, she seems to be making up for lost time.  No stick is safe when Meg is hopping about!

How old is Elsie?  She reminds me a little of my pug Tani.  We called Tani the 'fun police' as her mission in life was to stop other dogs from having fun.

HI KAREN! I love the sound of Tani, and now I've got an image in my head of this little pug in a uniform going round telling everyone off. I think we need a pic (hint...)

Elsie will be nine in November. She looks older, I think, because she's so grey. She's been going grey since she was about eighteen months, but it's sped up a lot the last couple of years. At the moment she looks like a negative panda. At this rate, I'm going to wind up with a polar bear.

She's a true survivor, and in many respects it was my experience with Elsie that kept me going through Meg's struggles. She was rescued direct from the breeder, who was going to put her down because she wasn't thriving. This is putting it mildly. I didn't realise when I took her on, but she had septic peritonitis, pancreatitis and hepatitis all at once. Her liver was so inflamed that it had actually split open. When she was ten weeks old, they took out her intestines to try and find the cause of the problem (I mean, they put them back in again, obviously LOL), but they never did. We think it was some sort of trauma in the womb. So many times, I thought she'd had it, and so many times I agonised over whether it was fair to keep trying, and even if she did survive would she have any quality of life etc. etc. I suppose you kind of take the lead from them, don't you, and she was just so determined not to give up. It was quite remarkable that so tiny a creature could contain such a powerful will to survive. She just would not give up. It wasn't until she was about nine months old that I started to feel confident she would make it to adulthood, by which point she was irredeemably spoiled (of course). Now she's almost nine years old and in excellent health; she has no ongoing issues at all. At our vets they have a portrait of her on the mantlepiece (its in an old townhouse), because they say they've never known a dog to survive a start like that. Elsie is my small, sturdy beacon of inextinguishable hope.

She's actually extremely playful, far more so than Meg, at least with other dogs. What she hates is to be left out. I think in the video she's jealous of the log that Meg is playing with... They very rarely play together. I love it when they do, but I guess they're just so different. Meg is a hunting, chasing girl, while Elsie loves wrestling and tugger.

I often get asked if Elsie's part pug. She isn't, but she does have certain puggish qualities. Above all, her stubborn determination, which I treasure so much, because that's what saved her. She truly is the most stalwart of friends.

Here's a pic of her as a pup. She had to wear a body warmer because her coat was so thin. And after this I promise, no more pics for at least ten minutes... 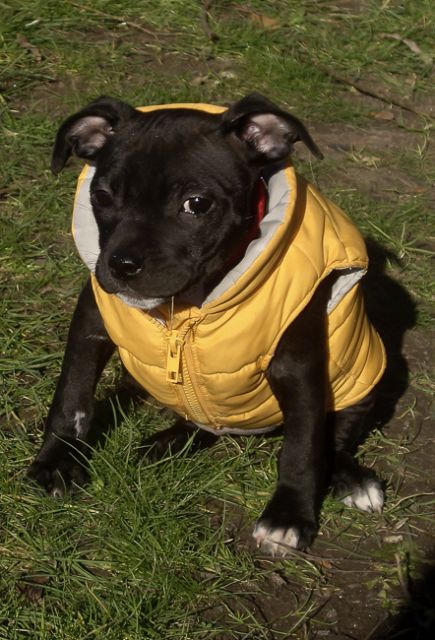 PURE bliss is right!!! Such a happy FB memory ... I have a love/hate/sad with those memories but they are part of life so I enjoy each day that I am reminded of the past through Facebook!

I have to laugh at the barking too... Jasper does that at the dog park when the dogs get into their zoomies ... I also call her the "fun police"... she likes to dictate how others should play which apparently, is not rough and rambunctious!

Alison with Spirit Shelby in her heart

Oh wow just looked at your thread and absolutely LOVE the video, the coordination with the music (especially when Meg is shredding the branch) BRILLIANT 🎼🎻🎻 how lovely to see the two of them having such fun 😃 the only thing wrong is the absence of 🐿🐿🐿🐿 I'm sure they would agree😄

And Elsie really is the ultimate fighter 👊🏾👊🏾👊🏾👊🏾 and such a cutie in the photo, no way anybody can resist that cute little face of hers 😙

Your girls are sooooooo lovely 💕💕💕

Lots of kisses and cuddles flying your way, keep the photos and videos coming 🐾😘❤️🐾😘❤️🐾😘❤️