If your dog lost a leg and you are wondering if you can take Tripawds to dog parks, these videos and tips will put your worries to rest.

When a dog loses a leg, do other dogs care?

We humans tend to worry about re-introducing our new Tripawd to other four-legged dogs. Concerns like:

The truth is, most dogs don’t give any indication they know that a Tripawd is “different.” As for Tripawds, those who loved the dog park before amputation surgery, will probably still love it when recovery is over.

When our fearless founder Jerry lost his leg, we worried that he wouldn’t be able to handle the dog park or day care. He was an only child, and wrestling with other dogs after his surgery made us nervous. But he proved us wrong. Here’s what we discovered on the road in Asheville, North Carolina:

Through the years, we’ve learned that Jerry wasn’t the only Tripawd at the dog park who could hold his own. At a Colorado Tripawds party in 2010, a whole group of three-leggers showed people at the dog park that Tripawds rock!

Later, Wyatt Ray showed he could hold his own during playtime with the colossal Titus:

Another Tripawds member, Asher (aka Asherton Eugene Vincent von Tripod III, Esq.), showed us that the park can be a great place for dogs who enjoy that environment:

And before he went to the Rainbow Bridge recently, Arktik the three-legged Husky showed us that dogs with three legs are just as spunky as any at the dog park:

Here’s what Arktik’s mom shared with us about their experience at the park:

For the dog parks, it is an interesting question. My feeling is that dogs (and animals in general) do not care and do not even pay attention to it. It is all about the energy the dog is showing.

I think if a new tripawds would have change in its personality a lot and had lost confidence a lot, maybe that would show for example at the dog park, not because of the missing leg but rather because the shift in its personality. — @arktik

Do’s and Don’ts Tips for Tripawds at Dog Parks 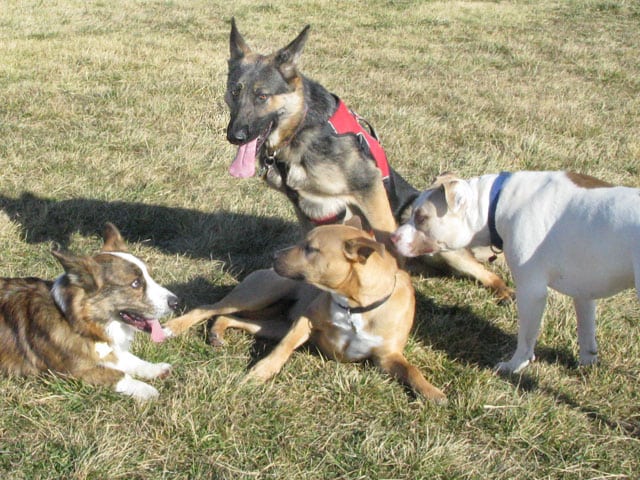 Taking a Tripawd to the dog park is a happy day for many of us. It reminds us that our dog can enjoy living life and doing favorite activities. But before you head to your favorite dog park, please remember these tips for Tripawds at dog parks:

DO wait until your veterinary team gives you the nod to go to the dog park.

Ideally, you’ll get activity clearance from your canine rehabilitation therapist. Remember, your dog’s first rehab visit is free thanks to the Tripawds Foundation!

DON’T let your Tripawd run around until exhaustion sets in. The dog park is hard work and rehabilitation therapists tell us that the “explosive activity” dogs love, like chasing and running, can cause injury in Tripawds who aren’t strong enough.

DO require your Tripawd to take frequent leashed breaks. Help your dog avoid potential injuries by leashing up and making sure your hero has plenty of rest at the park.

DON’T make the dog park a weekends-only thing. Dogs are most prone to injury when they become weekend warriors. Help keep your Tripawd in shape with more frequent but shorter dog park visits.

Sometimes it’s tough to walk that line between allowing our Tripawd to just be a dog, versus setting them up for a bad injury. Most of us will make mistakes along the way (we sure did!). Proceed slowly and carefully if you want to take your Tripawd to the dog park again, and keep your canine rehabilitation team in the loop just in case your pup needs a strengthening boost from a professional.

Do you go to the dog park with your Tripawd hero? If so, tell us more about how they’re doing! Comment below to share your story.

8 thoughts on “Is It OK to Take Tripawds to Dog Parks?”

Help all amputee pets and their people with a charitable contribution to the Tripawds Foundation.