Senior Tripawds are super special, which is why today we’re sharing the wonderful story of Tucker. This 16 year old Tripawd has been a three-legged dog almost his entire life and has made the most of every second. He’s soaking up the spotlight today for our Tripawd Tuesday celebration! 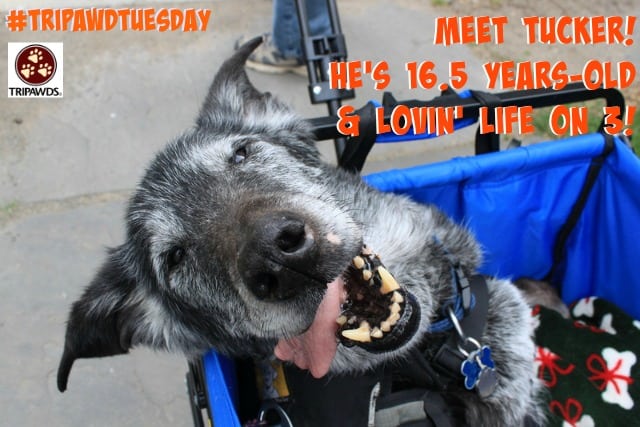 My Life with Tucker

2016…. When the morning comes, I give him time to wake up, by giving him a little rub down to warm him up and prepare him for the walk downstairs. You may say why don’t I let him sleep downstairs?

But we need to start at the beginning. The year is 2000…I decided to drop off blankets to the local shelter. They asked if I wanted to see the dogs and I said NO!! But then I thought, I’m 43 years old, I’m an adult, I can do this. All went well…until the very last kennel and there he was…a 5 month old lab mix puppy with a partially amputated right front leg…he had this little stump…OMG!!

He came up to the gate to say hello and the Director just happened to be passing by and asked if I wanted to know his story….oh God NO!! But he told me anyway; of how the bone didn’t develop at his wrist and his paw flopped around. So the people who previously had him, wrapped his leg up and he would drag the paw around; eventually, they turned him over to the shelter, who then did a partial amputation. Now the Director asked if I wanted to see him. NOOOOOOOO!!!!

But he brought him out and the second I held him, I knew he’d be mine….I’d just have to break the news to Steve. Well…I didn’t for a week, instead I would visit the pup, who they called Meritt, on my lunch hour for a week. Finally I asked Steve….”how would you like a third dog?” To which he asked, “do we need a third dog?” And I said, “no…but he needs us.” So we introduced Meritt to our two dogs….I knew Kelsey would be alright, but Murphy might be an issue and he was….but, we decided to foster him for a week and see if we could make it work. A week later, we went back and signed the papers and now the dog known as Meritt, became Tucker McLuckie.

I remember that I tried to pay his fee of $95 and they refused payment. You see, Tucker was a nippy puppy, he didn’t know boundaries and he had just nipped me right in the cuticle and I had a little blood on my hand. They said that anyone who still wanted him after that, didn’t have to pay. I looked at them all befuddled and was like…why?? He’s just a puppy and he’ll grow out of it. Well, he was the most strong willed pup I’ve ever had and he would continue to be nippy for a year. So much for thinking this would end soon. LOL! But the day finally came, when I got so frustrated with him doing this, that I stuck my whole hand in his mouth and told him to go for it. WELL…he looked at me like I was crazy and that was the end of it.

The first year was a rough one, Murphy was very alpha with him and as a result…Tucker didn’t trust meeting new dogs, since Murphy would jump on him and nip him…SIGH! We worked with a trainer and on our own and eventually things did work out, but I wish I knew what I know today and maybe it could have gone smoother. But, in time, he and Murphy worked out their positions in the pack and Murphy started to play with Tucker. Whew!!! Fortunately, we also had our sweet Kelsey and Tucker just ADORED her. She was very gentle with him, so that was really good for him. He loved to lick her face, every night and got so excited about it, I swear he would bounce her head up and down off the floor like a basketball, until she gave her famous “two yip bark”, signaling that she had enough.

Very soon after we got him, we ended up having his stump removed, even though we loved it and it was so damn cute. He would dig a hole with his remaining front leg by bouncing up in the air and coming down in the hole and repeating this process over and over. As the hole got deeper, his little stump would try and dig too. I use to pet his stump when he snuggled with me on the couch and he liked that. But he ended up with phantom leg…meaning, it felt to him like he still had the whole leg, so he would land on it whenever he jumped off anything and in time, he actually developed a small hole in the bone and we knew we had to take it off, before he got a bone infection. It turned out to be the best thing we could have ever done for him. He stood taller and boy oh boy, could he move!!! This made us so happy, because when we first brought him home from the shelter, he walked very low to the ground, instead of fully up on his foot. After he recuperated, there was no stopping him!

We ended up taking him to an agility class and our boy was faster than a border collie in a competition in class. He would have placed first, if he didn’t knock down one pole….but he was first place as far as I was concerned. One day he literally just jumped straight up and over a pole and floored the instructor….not me though….he was a gazelle in class. I told her so!!!

Over the years, Murphy and Kelsey passed on and in to our lives came Jasper and Zuzu. Now Jasper may be the smallest of our pups, but she took the alpha position in the dog pack and she decided to put Tucker in his place…you can imagine how well that went over with me. And she learned, pretty fast, he’s MY TUCKER and I’m having none of that…for I’M THE TRUE ALPHA IN THE HOUSE!!

Then there’s lovely Zuzu who LOVES Tucker, so much and in time, Tucker relaxed and he learned that Zuzu loved him and they formed a wonderful bond. The funniest thing is, though Jasper is the alpha in the dog pack, if she gets really scared, can you guess who she lays next too??? Yep….Tucker, her big brother.

There are days that my heart just breaks, when I see my “Tucky” having a hard time getting his back legs under him, as he attempts to stand up. And I cry. For almost his entire life, he would follow me wherever I went. When he was not even a year old, Steve let him go when we were outside…I panicked!! thinking he’d run away….well, he did run…right into my arms and has never left my side or my heart.

Part of his aging has resulted in him not being able to follow me like he always has. So many times, when he realizes he’s all alone in a room, he starts to bark…basically, the dog equivalent of “HEY! HEY! Where are you Momma??” I use to tell him Quiet! Stop! Enough!….blah blah blah….but then the day came, when I just got what I needed from the other room, came back to him and suddenly, all was right in his little world.

Amazingly, he can still get up the stairs on his own. If I don’t put the gate up, suddenly, I hear that familiar thump-thump-thump on the stairs as he slowly and carefully makes his way upstairs to me. I will continue to let him do this as long as he can so he can keep strength in his back legs, since his remaining front leg continues to get weaker. And again…I cry. You can say I rescued him, but we rescued each other. He’s MY TUCKER…I’ve never had a dog closer to me and at the same time, no other dog has pushed my buttons as much as him. We thought our first dog was stubborn, but he brought it to a whole new level.

But now he gets a pass with a lot of things he use to not get a pass for. I’ll finish eating my dinner, put my bowl down on the couch and he’ll manage to hop over and just lick it clean. A few times, Steve or I would say….Hey! What are you doing and then the day came, when I looked at Steve and said…just let him be. Would a dog trainer tell me I’m doing the wrong thing? Maybe. Do I care? Nope! He’s lived a life I never imagined when we adopted him. To be 3 legged and still able to get around like he does is just amazing to me. I like how his acupuncturist said that’s how he’s managed to make it to 16 years….with his tenacity and his strong will. He recently developed his passive aggressive ability!!! He’s learned he can just plop his front end on the ground when you try to make him move and he stays like that with his butt in the air!!! And then I laugh….

Many a night, as I head up to bed, I have him walk down the hallway with me and he knows when we get to the stairs, I will carry him up. We get into the bedroom and he’s learned how to turn himself around and get on to his comforter. He doesn’t fall asleep right away; sometimes he spends time licking his front leg. His poor little legs have some worn spots on them, from him pushing to get his legs under him, so he can stand up. And once more, I cry. And as I get into bed, he watches me…for we have that special and unique bond. Eventually he falls asleep and when the morning comes, I give him time to wake up, by giving him a little rub down to warm him up and prepare him, for the walk downstairs.

Tucker and Linda can be found on www.luckipups.com, Facebook and Instragram!