Most canine amputees get along well without a Tripawd wheelchair. But for those with mobility issues and also giant breed dogs, a set of wheels can boost their quality of life. 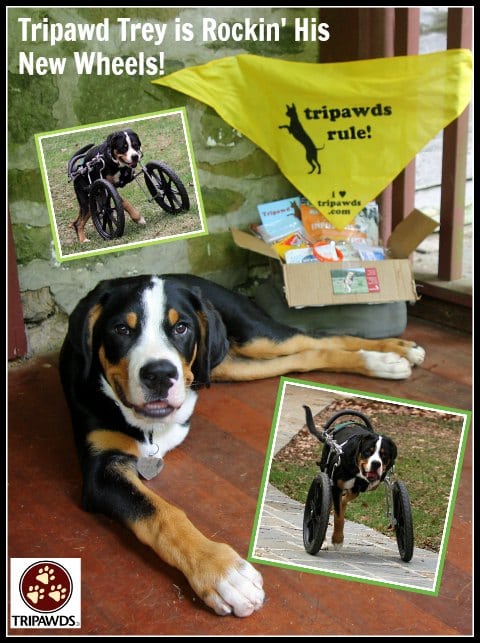 For instance, check out how Trey (aka Wildest Dream Trés Spécial) is doing with his new front-leg Tripawd wheelchair.

This young pup is a Greater Swiss Mountain Dog who came into this world as a “natural born Tripawd.” He’s officially still a puppy, but this handsome boy will probably grow to a weight of anywhere from 120 to 155 pounds (54 to 70 kg)! 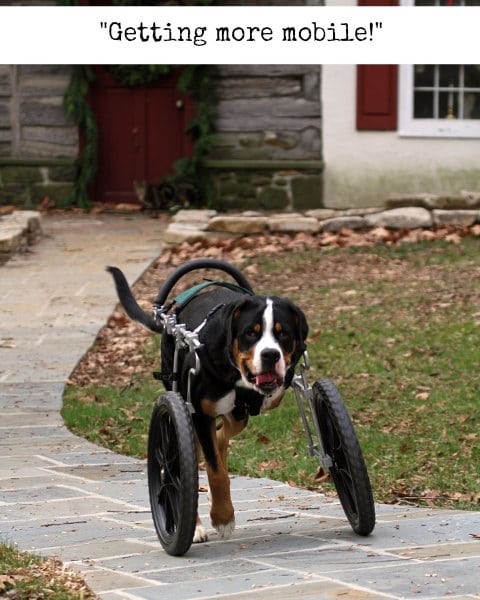 Throughout the course of his lifetime Trey’s carpal (wrist) joint, shoulders and spine will face tremendous impact. As we’ve seen with giant breed Tripawds like Cemil, he’ll need extra TLC to live a pain-free life. Trey’s mom Karen is super knowledgeable about animal biomechanics and rehabilitation therapy and as a parent to other Greater Swiss Mountain Dogs for over 20 years, she understands his breed and what to expect.

In her Forum post “Trey’s Doing Wheelies” she wrote about her experience getting a front-leg Tripawd wheelchair for Trey: 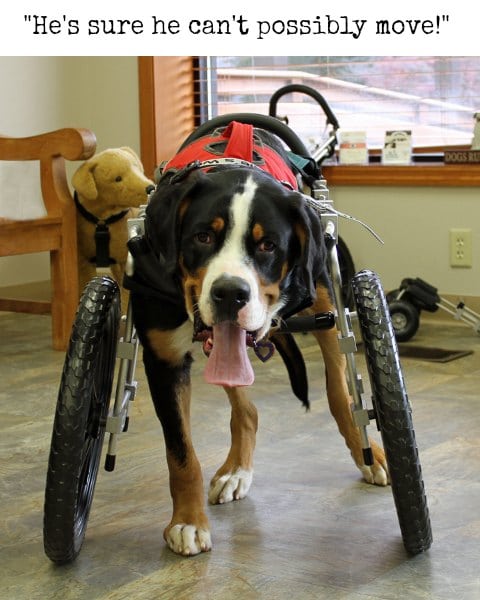 Trey Gets a Tripawd Wheelchair

“Trey has been growing like a weed. He’s now almost the same height as my 9 1/2 year old female! The downside to this, has been severe stress on his lone shoulder and wrist. Less than ideal to grow so rapidly with growing joints. So, to take some of the stress off his shoulder, and let him run and play outside with the pack, he got wheels!

After the initial adjustment period ( I’m just going to sit here – I can’t possibly move with this thing ) he has become a speed demon.”

Karen knew better than to attempt a DIY dog wheelchair. She made the smart choice to contact Eddie’s Wheels, the only dog wheelchair manufacturer to make custom front-leg carts for dogs. The company’s extensive experience fabricating canine wheelchairs is known worldwide. 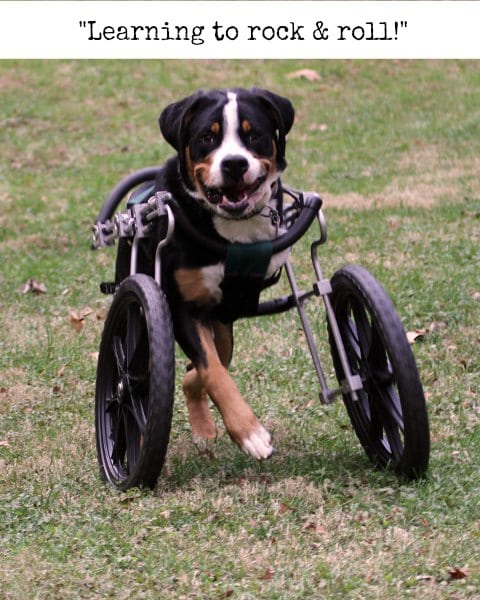 “We live in Pennsylvania, six hours away and were very fortunate to find a pet prosthesis maker only an hour from home. My Pet’s Brace in Morgantown works directly with Eddie’s. They spent several hours taking pictures and measuring Trey before they ordered his wheels. They understood my desire for adjust-ability for my rapidly growing pup.”

Trey’s body wasn’t the only thing that Eddie’s Wheels had to consider. They also had to think about how a wheelchair would fit in his home. “We live in a 1740’s farmhouse, and several of the doorways are less than 30” wide,” explains Karen. “With the cant of the wheels, and width of the dog, we wanted to try to get wheels that would fit through all the doorways.” 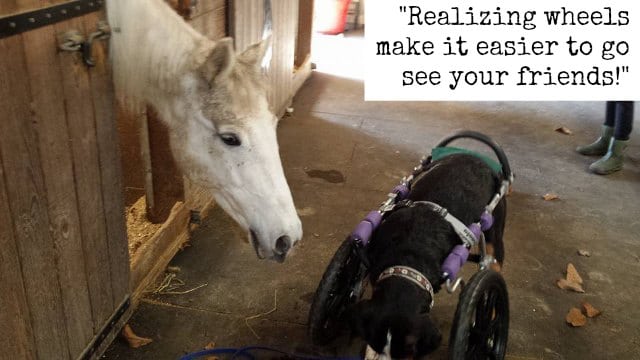 Trey isn’t done growing just yet, so Eddie’s Wheels will see him again in the future. “Trey will need a larger set of wheels as an adult, and he uses his wheels outside 98% of the time,” says Karen. “He can’t jump on the couch in his wheels!”

We asked Karen how Trey adapted to his new cart. She says that he wasn’t exactly a natural at using his wheels, but with a deep connection to Trey’s psyche, Karen knew how to ease his apprehension.

“Trey begged to differ when he was first put in his wheels at My Pet’s Brace. No real fear, but no desire to move at all. We slowed down the introduction at home. Trey is a deep thinker, and needed to figure things out at his own pace. The wheels needed to be associated only with good things. 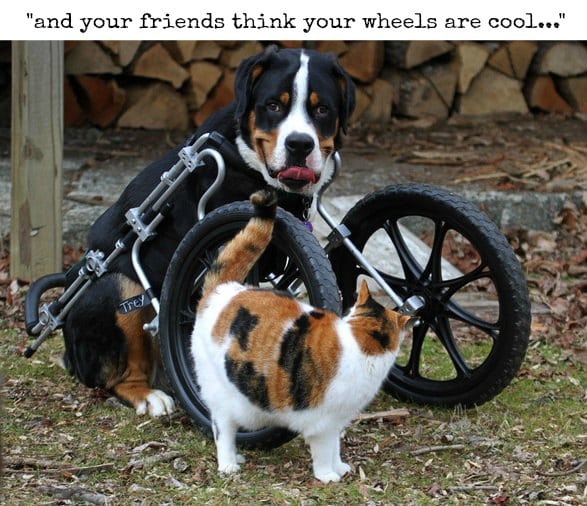 I started by treating him every time he went over to explore the wheels on his own. That progressed to treating only for positioning himself between the shafts. When that was comfortable, my husband and I carefully lifted him into the wheels, treating and telling him how wonderful he was the entire time.

We made sure he was in a wide open, flat space with no snags and let him think for a while. We wandered around the drive and eventually he wanted to come see what we were doing. Huge praise for his few faltering steps and he was done for the day.

My other dogs have been well socialized and exposed to many odd things, so none of them reacted to the wheels at all. When Trey discovered he could run with the pack in his wheels, my mission was accomplished! 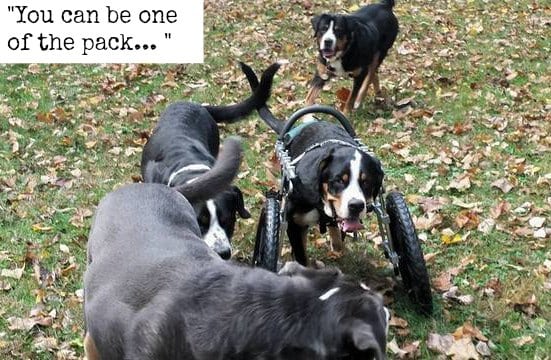 He now gets excited when his wheels are pulled out and trusts them to support his front end. He even coasts a few steps downhill, or when running, by holding his front paw up and rolling. We are currently working on loose leash rolling and learning to match his speed to that of the person with him – his heeling equivalent!

Since he started wheeling, his shoulder strength and stability have increased, and his topline has gone from humpbacked to almost level.”

In addition to regular veterinary care, Trey gets acupuncture and cold laser treatments. “The therapies are staggered two weeks apart, and help ensure Trey has no soreness or inflammation,” says Karen. “I check him daily for problems, but it’s good to have another set of eyes/hands assess him on a regular basis.”

Trey’s weight is also something she’s conscientious about. “Trey is already 96.6 lbs. at 11 months of age. With all of the orthopedic challenges a fast growing, giant Tripawd faces, we keep Trey slim. You can readily feel his vertebrae and ribs.” 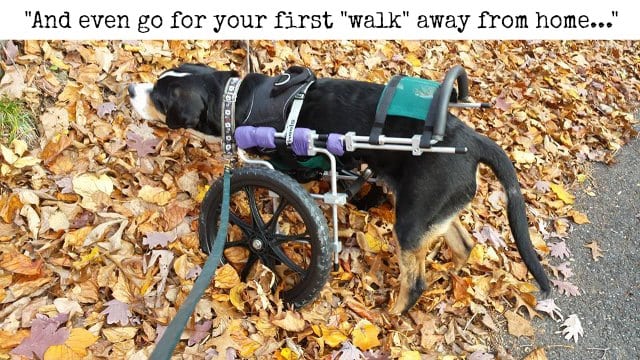 As part of a pack that includes three adult Swissies, three barn cats, two horses, and a parrot, Trey is surrounded by great company. He even has an older packmate Xena, who is an honorary Tripawd because of a botched shoulder surgery as a youngster. “She is the reason when the breeder was looking for a suitable home for Trey, my name came up again and again. Xena is large and in charge, even on three legs. She and Trey seem to have a special friendship, maybe it’s because they both snore like lumberjacks!”

Karen says she would like Trey to become a therapy dog if he enjoys it. As someone who recuperated from a severe brain injury, she wants to thank those who helped her by ‘paying it forward’ and helping others through tough times. Karen says “Wouldn’t that smiling, happy face be an inspiration to children afraid of being different, or orthopedic patients stressing over using mobility devices?”

7 thoughts on “Trey’s Adventures with his Tripawd Wheelchair”