If you are researching osteosarcoma chemotherapy choices for cats and dogs, you may find conflicting information about the most effective number of chemotherapy treatments for this cancer. Veterinary oncologists recommend anywhere from four to six rounds of chemotherapy, depending on their own remission success rates and which veterinary oncology studies they follow.

In an attempt to reach a consensus about the best number of chemo sessions for canine osteosarcoma patients, researchers at Colorado State University’s College of Veterinary Medicine and Biomedical Sciences conducted a study called

“Comparison of Carboplatin and Doxorubicin-Based Chemotherapy Protocols in 470 Dogs after Amputation for Treatment of Appendicular Osteosarcoma.”

We don’t have the scientific background to interpret the study but thankfully Tripawds member Katy Richards-Hrdlicka, aka Jackson’s Mom, does! She kindly wrote the following guest blog post to help us makes sense of the study and its accompanying conclusions. Here it is (along with fun photos and video of Tripawd Hero Jackson, 18 months post -diagnosis and doing great!).

“Many pawrents here grapple with the decision to proceed with IV chemotherapy for very good reasons. There are side effects to consider, types of drug(s), route of administration (oral, known as metronomic chemotherapy vs intravenous, the more common and traditional), duration (3, 4, 5, or 6 rounds, 1 year, 1.5 years, etc), and cost. If you have a great relationship with your oncologist and that oncologist is up on the literature, having a discussion about these factors can be a relief, grant sanity, ease restless nights, form bonds, and give life.

But then there’s the assessment that no one can answer: will it work? Is it worth it?

When a new Tripawd joins the club due to osteosarcoma, we see different treatment plans. For the most part, carboplatin is the recommended drug and it’s administered 4-6 times, each 3 weeks apart. Understandably, when one dog gets 6 rounds and another 4, folks may think (especially the owners!) “more is better.”

To address this concern, we turn to a recent study out of Colorado State University’s College of Veterinary Medicine. We respond with: “there’s no difference between 4 and 6, so save the time and money and go with 4 rounds of carboplatin.”

Here’s the rub, for me anyway: I’m a trained scientist, so when I hear there’s no difference between 4 or 6 rounds of IV carboplatin for osteosarcoma, I want to know the details. I got in touch with the study’s lead author and when the final paper came out, Dr Selmic emailed me its PDF.

Many chemotherapy protocols have been reported for treatment of canine appendicular osteosarcoma (OSA), but outcome comparisons in a single population are lacking.

Objective: To evaluate the effects of protocol and dose intensity (DI) on treatment outcomes for carboplatin and doxorubicin-based chemotherapy protocols.

Results: The overall median DFI and ST were 291 days and 284 days, respectively. A lower proportion of dogs prescribed CARBO6 experienced AEs compared to other protocols (48.4% versus 60.8–75.8%; P = .001). DI was not associated with development of metastases or death. After adjustment for baseline characteristics and prognostic factors, none of the protocols provided a significant reduction in risk of development of metastases or death.

Conclusions and Clinical Importance: Although choice of protocol did not result in significant differences in DFI or ST, the CARBO6 protocol resulted in a lower proportion of dogs experiencing AEs, which could be advantageous in maintaining high quality of life during treatment. DI was not a prognostic indicator in this study.

I’m now going to summarize the study, give you my thoughts as a scientist (I have a PhD in genetics from Yale University) and doggie-mom (Jackson is 18 months post-amp for OSA in his right hind limb), and some context:

Which Osteosarcoma Dogs Were Studied?

Here”s the revelatory part. I was stunned. Speechless.

The common, industry-approved metric for processing these stats is to lump all the patients together based on their PRESCRIBED treatment, not by what they actually got. That means that if you agreed to 6 rounds of carbo, but mets were discovered before the 3rd round and you stopped treatment, your dog and all her stats would be included in the “6 rounds of carbo” group.

This is a major problem. I understand that this stat needs to continue as so many foundational studies have used this and that means folks can compare outcomes. Or does it? Thankfully, Dr Selmic did other analyses with the ACTUAL doses in the Supplemental Info, but not in the manuscript’s main text. If you also have access to her work, you”ll now notice I’m going to largely ignore the rest of the tables and data from the main text and focus on the Supplemental Info.

Back to the paper. OK, so 6 rounds of carbo show the longest DFI and ST. But, not really. That’s because once the authors controlled for the above predictors in only the dogs that actually completed the prescribed protocol, there was no statistical difference among ANY chemo option in terms of DFI or ST. What does this mean? Dogs that made it through their prescribed protocol and did NOT have any of the known predictors above were used in the statistical calculations. 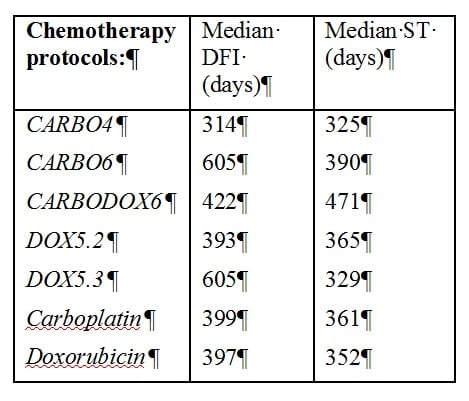 Do Your Best to Complete Chemotherapy

In conclusion, the type of chemo given didn’t make a statistical difference about the dog’s DFI or ST, assuming the dog finished its prescribed protocol. What DID make the difference was whether the treatment was finished at all. And by “finished,” at the least, that’s 4 doses of anything. This aspect was not emphasized in the paper. It wasn’t really the paper’s aim, but as a Tripawd-Warrior mom, that IS my aim!

I want to know how many doses should we go for? If there are side effects and we’ve done 3, should we push it and do 1 more or 3 more? From these data, it appears doing anything for 4 rounds is as good as 6 rounds of anything.

Then again, there may not have been enough pups enrolled to differentiate between 4, 5 or 6 rounds, or of what protocol.

Bottom line: do your best to complete the chemo protocol, on time, with the proper dosage.

Many thanks to Katy for contributing this important information to the Tripawds nation. If you have experience in an applicable topic that you’d like to share with the community, contact us today, we especially love guest blog volunteers!

23 thoughts on “How Many Chemotherapy Sessions are Best for Osteosarcoma in Dogs?”

Want to talk with a friend who understands? Call the toll-free Tripawds Helpline!