Hank's surgery day is just a few days away and I'm trying to set up something for Hank to be his recovery corner. If some of you have some pictures of your recovery corner would you mind sharing them so I can inspire myself.

Dogs: Friends for life, faithful and true.
Courage is being scared to death... but saddling up anyways.- John Wayne
bikeintime.wordpress.com (will soon have Hank story)

Great idea! We'd love to see those photos too.

You might want to also search the blogs since that's where lots of members share their photos.

Portable ex pens are a great way to confine recovering dogs without secluding them in another room.

Gosh, I never thought to take a pic of Abby's corner... but then it was more like Abby's "recovery half-of-the-living-room." We wanted her to be with us, so we set her bed up next to the sofa. This is kinda silly but... when we wanted to keep her confined, we had this tall narrow piece of white outdoor plastic lattice that we would lay across the living room, so she couldn't roam too much.

Here she is lounging on her bed next to the sofa in her tshirt and her cone, looking not super impressed... 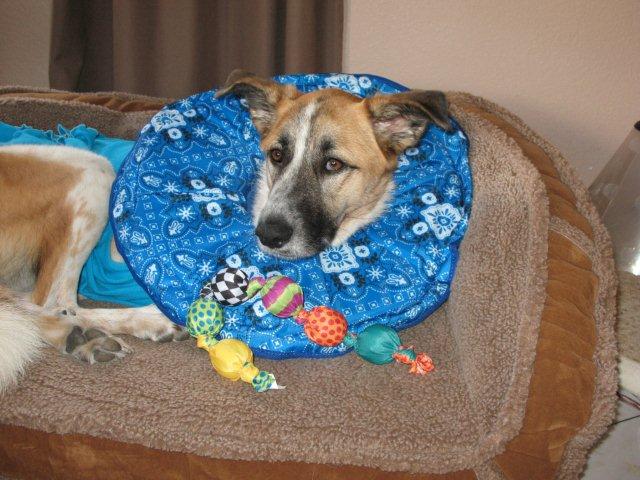 Thanks for the links. It was helpful for gates and pens ideas.

Dogs: Friends for life, faithful and true.
Courage is being scared to death... but saddling up anyways.- John Wayne
bikeintime.wordpress.com (will soon have Hank story)

I don't have any pics of Daisy's recovery room.  I basically just gated her off in the living room to keep my other dog and cat from pestering her when I wasn't able to be home.  I had set up her bed in there for when she came home and she laid on it for maybe 5 minutes (I made her get on it) and then wanted on her normal spot on the couch.  She wouldn't relax until she got on the couch so I wrangled all 80 lbs of her up there.  Sometimes the best laid plans don't really work...they want to do things there way LOL.  Same thing happened at bedtime that first night.  I was gonna sleep on the floor by the couch but she wouldn't rest.  I finally relented and wrangled her up on the bed where she normally sleeps at night.  She is such a creature of habit that we just had to do our normal routine.

We were on the other end of the spectrum.   Maggie had no interest in activity, I had to coax her to do anything so I never blocked her off from going anywhere.  I was home with her for the first week as I had a vacation scheduled already before the amp became necessary. I did sleep on the inflatable mattress in the living room for a few nights so I could be closer to her and not have her try and get up on my bed, or fall off of it if I got her up there (she was a pug).  We were also closer to the back door so I could get her outside in a hurry if she needed to go.

What day is Hank's surgery?

I didn't know Hank's surgery was scheduled... what great news!!!

Gah! I have to figure out to post pics here. We didn't set up anything too elaborate. Our master bedroom is the entire upstairs of our house, so we moved downstairs into one of the guest bedrooms so that Wookie would have a more confined space. I just put some blankets in the corner, and that's where he spent the first few days. He didn't move over to the dog beds for probably a week, because it was easier for him to get up off the blanket (we have tile floors so it was more solid footing for him to push off when he wanted to get up).

I did buy a sling to help assist him in walking outside to go potty, but to be honest, I never had to use it. The morning after his surgery, I was hemming and hawing about the best way to get him up, and all of a sudden he ran out of the room, went outside, peed and pooped, then looked at me like... uh oh, how do I get back in? I just guided him back into the house and into the bedroom and he plopped back down. We really had no issues after that. But of course, Wookie was 2 yrs old and had a lot of puppiness in him, so it often takes a bit longer for older dogs to get the hang of it.

Right hind limb amputated 7/3/12 for OSA, started on alternating cycles of Carboplatin and Doxorubicin and oral Palladia. Single lung met 9/1. Met in the neck muscle removed 9/30. Large mass in sublumbar lymph node 10/2. Rescue chemo with ifosfamide 10/6. Mets to the rib and axillary lymph node 10/21. Started Leukeran and Pred 10/25. Wookie left this Earth for a far better place on 12/4/12. I miss you, Boo, you were my heart.

Ok, let's see if I can make this work.

This was Wookie his first day after surgery. He still had his IV catheter in so I could give him IV pain killers. I took him home the night of surgery (which I would never recommend unless you are a vet!). We just had him on some blankets in the corner of the bedroom, like I said, nothing too fancy.

Right hind limb amputated 7/3/12 for OSA, started on alternating cycles of Carboplatin and Doxorubicin and oral Palladia. Single lung met 9/1. Met in the neck muscle removed 9/30. Large mass in sublumbar lymph node 10/2. Rescue chemo with ifosfamide 10/6. Mets to the rib and axillary lymph node 10/21. Started Leukeran and Pred 10/25. Wookie left this Earth for a far better place on 12/4/12. I miss you, Boo, you were my heart.