We at Da Bear HQ NEVER get to comment as our wind up iPad crashes with images. But, gosh, golly, she is BEDAZZLED!! That is so fitting for Miss Cow. She looks so very, very happy and so very, very relaxed!!! Did she make that deep sigh and shnuffling sound ? Thank you for sharing! (And, yes, the needles are larger than what the vet 20 years ago used on my “TriPawd” horse:) Good for Miss Cow. She reminds me of a young Ava Gardner…what a life! What an adventure! What journeys! And what PawPawrazzi pictures shared internationallly!!! Love to Miss Cow from all of us here at Da Bear HQ!!!

Thank you all SO much for your wonderful words, Miss Cow is really touched by every single one of you lovely, lovely humans 💖💖💖💖 plus your dawgies and kitties, of course 🐶🐶🐶🐱🐱🐱

And she says paws up for Sally, Myrtle and Frankie for having ice cream every day in preparation for my 12 month ampuversary 🍧🍨🍦🍧🍧🍨🍨🍦

Luckily, she didn’t realise (or so she made me think) her back was smoking, it looks a bit like a Cirque du Soleil number, hey?

Eurydice has one session per week for the first month and then she’ll have another within 4-6 weeks.

This osteopath was recommended by her new vet and he uses several holistic techniques including mesotheraphy.

I will get full details about this next week and will let you guys know.

Thank you all SO much for your kind words of encouragement, I really appreciate it ☺️

Sending you all love, avalanche upon avalanche of kisses and tons of woof woods from my baby here 😘😘😘😘💕🐮💕🐾💖💖💖

Problem is I haven’t read the last chapter of the book on hypnosis so don’t know how to snap Mom up to reality.

I will get there but it may take a little while …

Lota of slobbery kisses and zzzzzzzz from Mom 👅💦💦💖😴

I’ll wait for you Eurydice!! If anything is worth waiting for it’s you!! 💕

I’ve beentrying out hypnosis and it works really well when I want treats or a walk! Very useful, that!! But I obviously have not wanted to make mom snap out of it so I can’t be of help here I’m afraid.

Keep me updated on the progress! And remember, I’ll meet you halfway!

PS make sure your mom puts those veggies in the blender for you to better be able to use all the vitamins and such!

Glad to hear you’ll meet me half way 🚗🚙

It won’t be long now!

Eurydice had another acupuncture session today and I asked the osteopath for more details concerning mesoteraphy.

Those burning chunks applied to some of her acupuncture needles are made of a herb called armois, sadly he doesn’t know the name in English and I could not find a translation on google.

He said other herbs can be used.

As it happens, this is the herb which can be found in France.

The crucial point is armois burns at the required temperature of 80 degrees celsius and keeps burning for 5 minutes.

The treatment is not linked to the herb itself, what is necessary is for an 80 degree heath to go through the needles for 5 minutes.

He mentioned this process is called moxibustion which is used in traditional Chinese medicine.

We also had the dreaded B12 injections but this time they were administered at different acupuncture points.

Eurydice enjoys the osteopathic treatments and (believe it not) the acupuncture too.

But she RUN like a bat out of hell whilst he was preparing the injections.

These are no ordinary injections, they are administered using a device which shoots the injection out for a split second.

He is amazed at how much of a trooper she is because despite of this last part of the treatment being uncool she still kisses him and jumps around afterwards.

New treatment in 3 weeks and the next 2 weeks later.

Hopefully we will make it that far ! 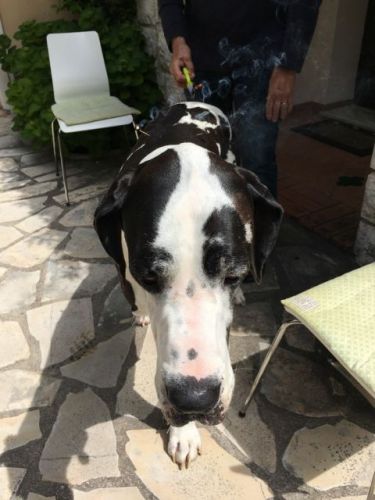 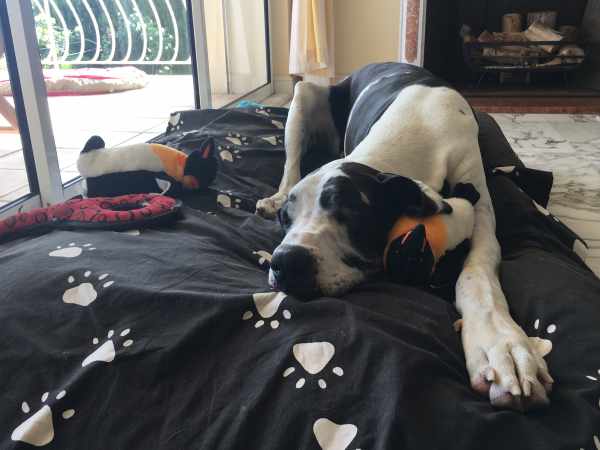 … I SO love Pedro 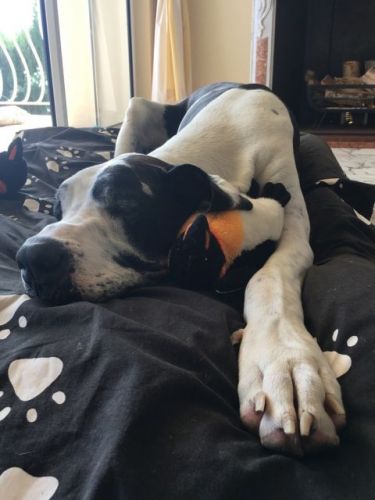 Thanks for sharing Teresa! I kind of knew what that was all about but this makes it clearer. Those injections sound a little scary though…😳💉

hang on, Manni’s got something to say:

Eurydice, it’s ok that you’re so generous with your kisses but Pedro?? That’s taking it a little far. See, I have been looking for you. And waiting. 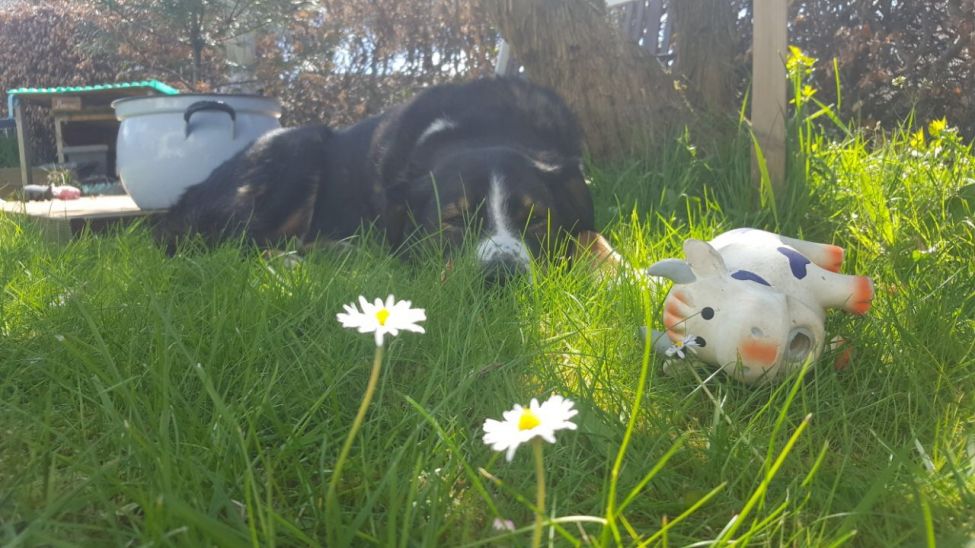 See my mom saw that I am still waiting for you and bought me a ‘replacement ‘. As if. But you see, you have Pedro, I now have Cow. I’d much rather have you!! 😍 I hope you still feel the same!!

Is there a blossoming love story between Eurydice and Manni?

Very sweet.  I believe Pedro is a fill-in cuddler until she can cuddle with Manni. I like Manni’s cow, also a good fill-in.

I believe Armoise (French Canadian dictionary) is of the Artemisia plants which include wormwood (in Absenthe), sagebrush, etc. Artemisinin , is extracted from wormwood and used in Chinese medicine for malaria and for its cancer fighting effects. Of note, unscientific of course, I had a few drinks of Absenthe last year and it cured me of my night sweats. My doctor was impressed.

I’m always happy to see photos of Miss Cow and now of Manni dreaming of Eurydice.

I’m so happy you are doing these treatments and that they are not too uncomfortable for our sweetie.

p.s. I’m so happy Eurydice loves her Pedro(s), who are holding up quite well!

Test passed. Please check you email for a reply about the issue you reported.

HaHa! My email is ll whacked up too!

Thanks for sharing the I co Teresa! REALLY Interesting! So glad you found these options. And interesting input Kerren!

AND we get to see these BEAUTIFUL pictures of Eurydice! She is just so srunning! And the Pedros are so cute!

And we get to see handsome Manni too!