Tripawds in the News

“When it comes to courage and spirit, tripod pets have a leg up”

Tripawds was featured in The Dog Trainer’s blog today. This pawesome description of life on three legs was written by  Jolanta Benal, CPDT-KA, CBCC-KA

“Tripawds.com is a huge website and online community devoted to amputee dogs, with blogs, help topics, and a downloadable guide to rehab and care. They even have a YouTube channel, which I strongly recommend you look at to cheer yourself up if your dog’s amputation is upsetting you.”

Apparently page 10 of the October 2012 issue of Dogfancy has a story titled “The Power of Three” that mentions Tripawds. This article s not in the online version of the magazine. Anyone with a copy care to scan the page and post it?

Fenway shared this pawesome Dog Fancy article about Tripawds, from the October 2012 issue:

“The Power of Three”

“I understand. I get it. But a dogwedding in this highly-charged political climate? Yes, Wyatt and Hannah appear to loosely satisfy SaveCalifornia’s “between-a-man-and-a-woman” criteria. But there is no getting around it: They’re dogs!

“We’re for marriage equality, period,” declared Wyatt’s owner Nelson, who once lived in Eureka. Now he, Rene and the dog crisscross the country in their RV, drumming up dog amputee awareness.

Nelson makes little attempt to romanticize the impending High Noon union. It’s an “arranged marriage. We hope they get along.” 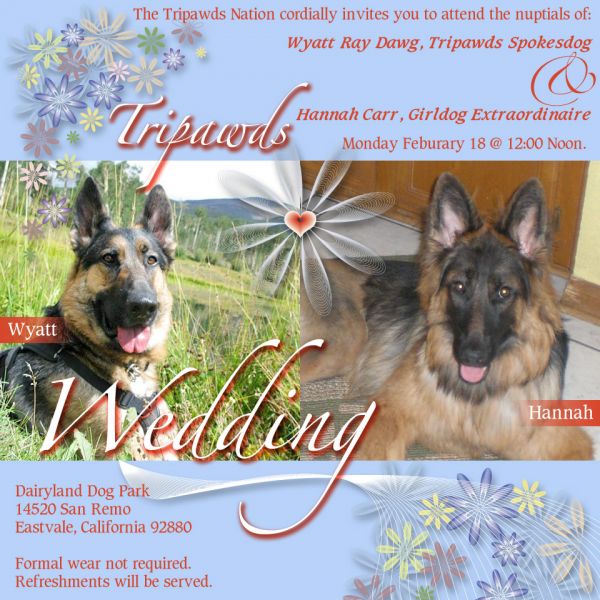 Tripawds makes it into Spirit Jerry’s hometown newspaper in Eureka, California, the Times-Standard!

Today on KOVR TV in Sacramento, Tripawds Rizzo, Austin and Kawala were there to represent the Tripawds Nation for the upcoming Morris Animal Foundation canine cancer walk on 4/28. A big three paws up to these inspiring pups and their humans for making it to the TV station!

Many thanks to Barb and Taz for generating this press in Idaho!

Today at 1pm Eastern, 10 am Pacific, tune in to Vegas Rock Dog Radio and hear Tripawds co-founder Jim Nelson talk about life on three legs and ways to help your Tripawd live a great life!

The show will be available as a podcast here.

Recently we were invited to submit a guest blog post to the pawesome resource, “Lessons from a Paralyzed Dog.” Here is our story, hope you enjoy it.

“Tripawds Show How to Live in the Now”

Thanks for the history lesson for those of us who are “relatively new” on this journey.

And Jerry continues to touch lives…as well as a dog named Moose!

Glad you include tne “Now” …alwqys a perfect reminder.

It was great reading the responses too.

Aww thanks. Well yeah, Tripawds wouldn’t be here if it wasn’t for Moose. What a pup!