The Cone (of Shame): Add Your Pics!

Well, since Millie suggested it, I thought I'd start it.  Here is the thread to share pictures of your dog wearing it's wonderful e-collar (feel free to move the thread to an appropriate topic if this isn't the right one).

Jack, the day after surgery about 5 minutes after we got him home.  The bed was new, but somehow he knew it was his and plopped down right away 🙂

Tika thinks she's a flower, this was last December right after she got home.  Collar didn't stay on long, she started freaking out later that night.

Well, I'm going to have to enjoy everyone's pictures.  Trouble never wore a cone, never had staples, never had stitches removed, never had a bandage, never had a drain.  I did put a toddler t-shirt on her to keep the wound clean since she insisted on going outside to lay in the grass.

Okay,  my pic was loaded earlier but then it blanked out.

I just reloaded it, I hope everyone can see it.

Ooooh, thanks for starting this. Too cute!

Kim, I'm so sorry. The pic isn't there. What happened exactly when you tried to load it? If you don't want to try again send it to us and we'll post it for you.

Here's Milly with her cone on yesterday (we call them buster collars here in the UK) ...

I took it off and put a baby tshirt on her instead ...

They look so much more comfortable in a t-shirt 🙂

Welcome to the Tripawds community! Thanks for joining the discussion.

Milly looks so cute. She'll be much happier soon, I'm sure. Best wishes for a speedy recovery!

I just came across this older post and wanted to add this adorable photo of Denali to the bunch. Anyone else care to add their pic to the Cone Hall of Shame?

I'm sorry but these are painfully hilarious, Fortis with a cone....now that's impossible!

What happened to the photo of Tika the princess?

What happened to the photo of Tika the princess?

Found it in Tika's blog: 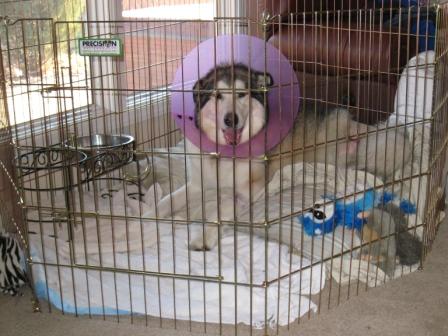 Thanks Rene, Oh my Tika was indeed a princess. Kim did an excellent job with her blog thing

.  I see little Caya now has a sister, Sitka. What a beautiful name. I loved Sitka, Alaska. Spent lots of time there back in my twenties. What a gorgeous place.

Great idea! A thread devoted to e-collars (also known as the "Cone of Shame" if you saw the great movie Up!).  Here's one of our Tripawd Max about ten years ago when he was a four-legged puppy.

Lest anyone think my wife and I were too poor and/or cheap to get him a decent e-collar, I assure you that wasn't the case.  It was a perfectly nice cone when the vet put it on him after his neutering, but Max the puppy was fond of tearing around the house and bashing into walls and doorways at full speed, using the e-collar as a shock absorber.  It quickly sprouted all kinds of razor-like jagged edges, which resulted in lots of tiny little cuts up and down Diane's and my legs when Max would bump his way around our ankles.  We attempted to blunt the sharp edges by lining the collar with duct tape.  As you can see, results were mixed.

One cool thing about this photo is that it got published a few years later.  The publishing company that prints Diane's page-a-day dog calendar put out a call for dog photos to be used in a book titled Bad Dog, which featured photos of dogs causing trouble of one kind or another.  They put Max's photo on page 126, although they annoyed the hell out of us by changing his name to "Harvey" (because according to them, this was somehow funnier than using his actual name).

What a great story. I love Max's name and those eyes! Hey, good work with the old handy duct tape. Duct tape is good for everything from blisters on a backpacking trip to taping up the "Cone of Shame". Thanks for sharing