I decided to move Rucca’s updates here because she will she just be hopping around, doing her thing. I’ve completely slacked off at updating her blog For now and what’s happening because she is really doing great. Representing the seniors with style!

Our rehab vet and physical therapist both said that she was doing really well and cleared her to do whatever she wants as long as it does not involve going down stairs. Rucca took this as permission to resume barking, running around barking, and jumping around barking. Hard to believe we missed it!  We have a series of home exercises that we are doing for further conditioning and the physical therapist will assess her when we get her adequan injections every eight weeks.

She when back to school two weeks after surgery and was super excited to be Doing Things. She is spending much of class on the sidelines to limit her steps but still had lots of fun, even completing most of a rally course at her second class. 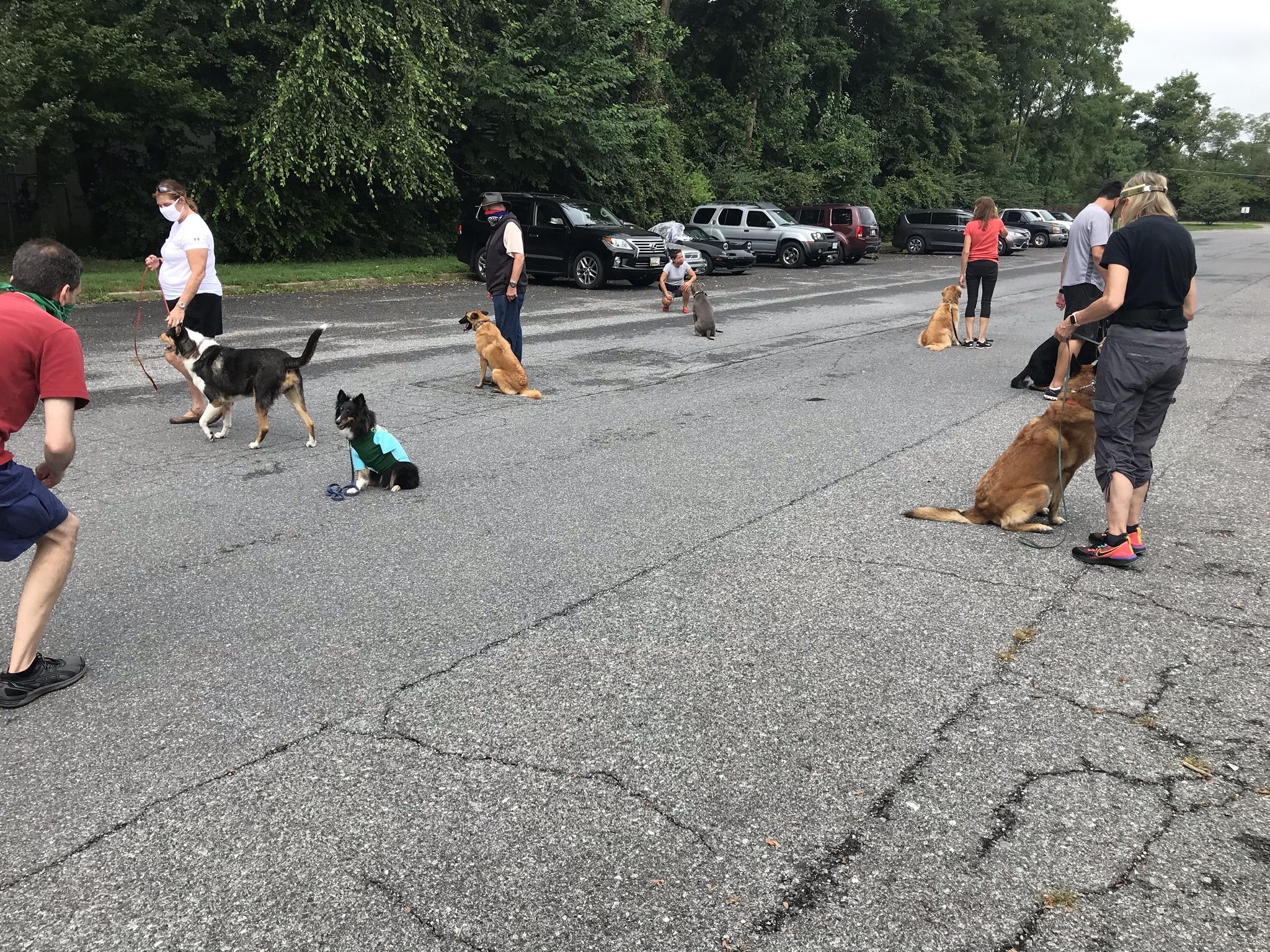 Finally, in her of her third week ampuversary, she has her first bath. Rucca is a quirky dog with a self drying feature that thankfully didn’t get damaged in surgery. Hopefully the video will come through.
First Bath

Rucca is such a character! It's great she's able to do so much and is barking to let everyone know.

Her self-drying must feel so good. I'm happy this little senior is doing so well. I must be a relief for you and would be inspirational to others.

I wanted to add that Elly is also self-drying, well kind of like a blow drier

Thrilled to hear  how well she's doing as she gets back to her normal routine.

We need a video with sound of her barking. Adding a video of her rally  class escapades woud be an extra  bonus...hint!

Love it! Another Tripawd in dryer mode! Rucca and Elly would make a great pawlor team wouldn't they?

I'm so hoppy Rucca is doing so well and got the all-clear for FUN!

You are so conscientious of her needs, a wonderful thing when you have a Tripawd. YAY for more good times with this crazy girl. She's such a hoot

Would it be OK if I added her video to the Tripawds YouTube channel? She's just so adorable, I'd love to share it with a wider audience!

rucca said
She when back to school two weeks after surgery and was super excited to be Doing Things. She is spending much of class on the sidelines to limit her steps but still had lots of fun, even completing most of a rally course at her second class.

I forgot to add; you should come meet Ari, who is also a rally Tripawd!

Yay for Rucca!  It's wonderful she is doing so well and funny how those things that used to annoy us are now so precious!

Rucca and Elly are the 'self drying' sisters!  I have to admit that I usually take the dogs to a groomer mostly because I have some problems with my hands and it's really hard to clip nails.  Luckily Elly tolerates the dremel but quad Pug Obie won't let me touch his feet.  Anyway- while things were shut down I was giving them a bath in the shower (we don't have a tub), I had forgotten how entertaining Elly was after a bath...we just have to be sure the door to my dad's bedroom is closed because her first choice is to dry off on his bed

Getting her back to class must be awesome too!

How is the adequan working for Rucca? I used it with great success in my last Pug Tani, and I just started 14 year old Obie on it last month.  After the loading dose I am giving him a shot every month.  With Tani we eventually went to every two weeks.

I’m so overdue for a Rucca update!  I can hardly believe that we will be hitting TWELVE WEEKS tomorrow.

Before the update, quick answers to the questions on my long ago last update. Of course, Rucca would be delighted to share any of her adventures on the Tripawds reel. I’ve been trying to get more video of her but she bounces around so much that it is impossible to get anything other than blur and Sheltie noise.

Second, we think Adequan is a miracle drug. She’s been using it for over a year, every eight weeks since the until build up was complete. The increase in her mobility was amazing.  Our regular vet is a certified rehab vet and his rehab specialist is doing Ru’s Adequan injections now so she can keep an eye on her and alert us to any problems. We are doing some home exercises but everyone who has looked at her thinks that she is currently in no need of a formal rehab program right now. Her years of frisbee and tricks gave her abs of steel and she’s a superstar at shifting her weight where it needs to be.

As for how she is doing - in a word?  Fantastic. She really had the easiest, smoothest recovery that we could have asked for. We had a tiny complication at about Week Six when the stubble started to itch and she realized she could reach the very bottom of the incision. She did some chewing and got a very small infection. A round of antibiotics and a bit more time in her T-shirts got us through that with no further problems.

She’s been off all pain killers except a Galliprant a few times a week since Week Four. She’s got mild to moderate arthritis in the remaining front leg and the regular dose keeps her flying high.

She is totally back to herself. Actually herself of about 3-5 years ago, she doesn’t act anywhere close to a nearly 11 year old dog. It’s become pretty clear that she was in a lot more pain than we realized before her surgery, probably more from the severe arthritis in that leg than the tumor. But with the pain gone, she is racing around, barking at the world, carrying her frisbee everywhere she goes, and being an ambassador for fun. She’s still going to dog school once or twice a week, although we do limit how much time she spends on the heeling type activities (much to her dismay).  She’s just Rucca. And that’s exactly what she should be.

I’ll close with some photos from the last few weeks, including our second choice Halloween costume. We’re saving her real costume for the big day! 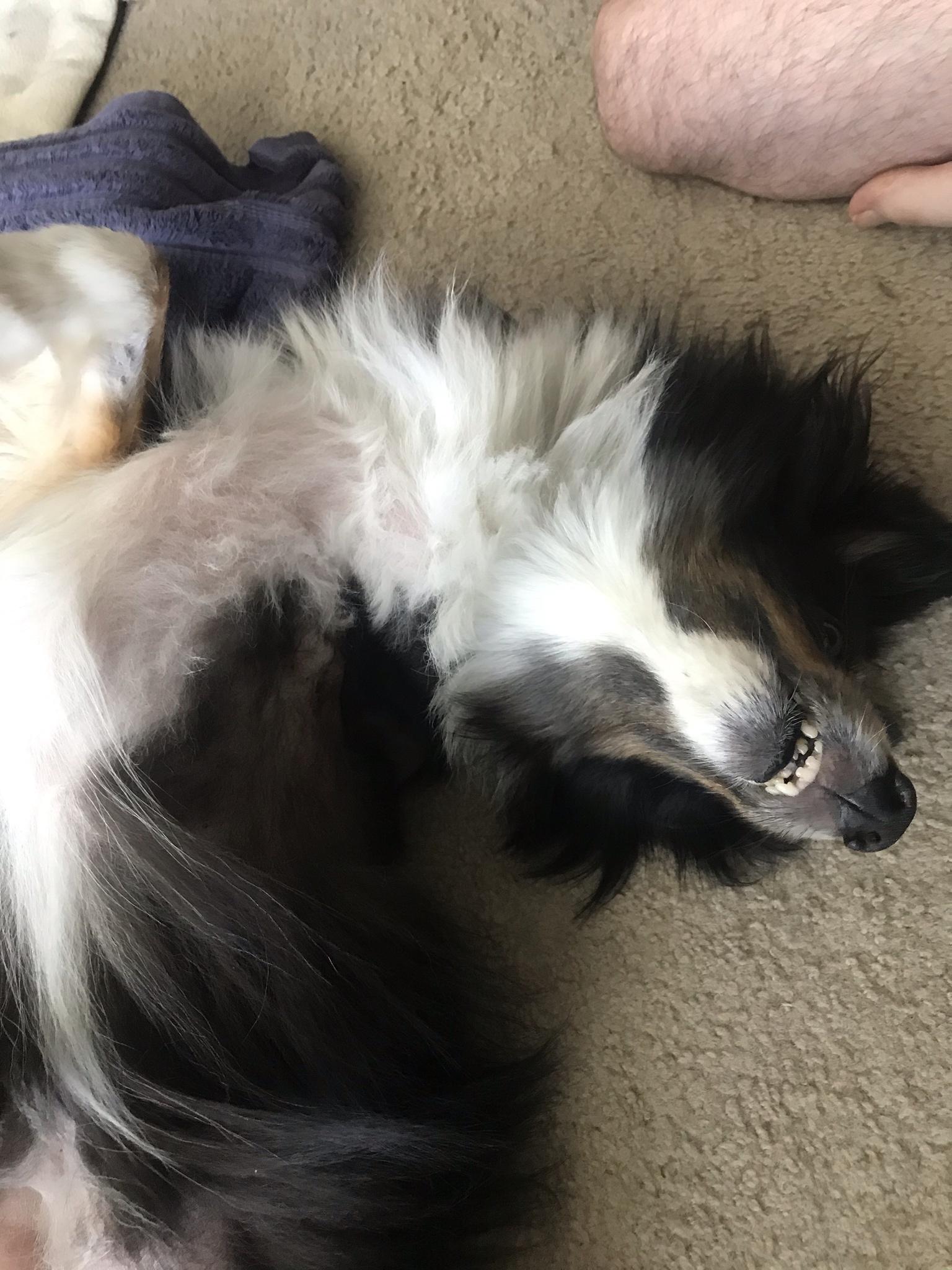 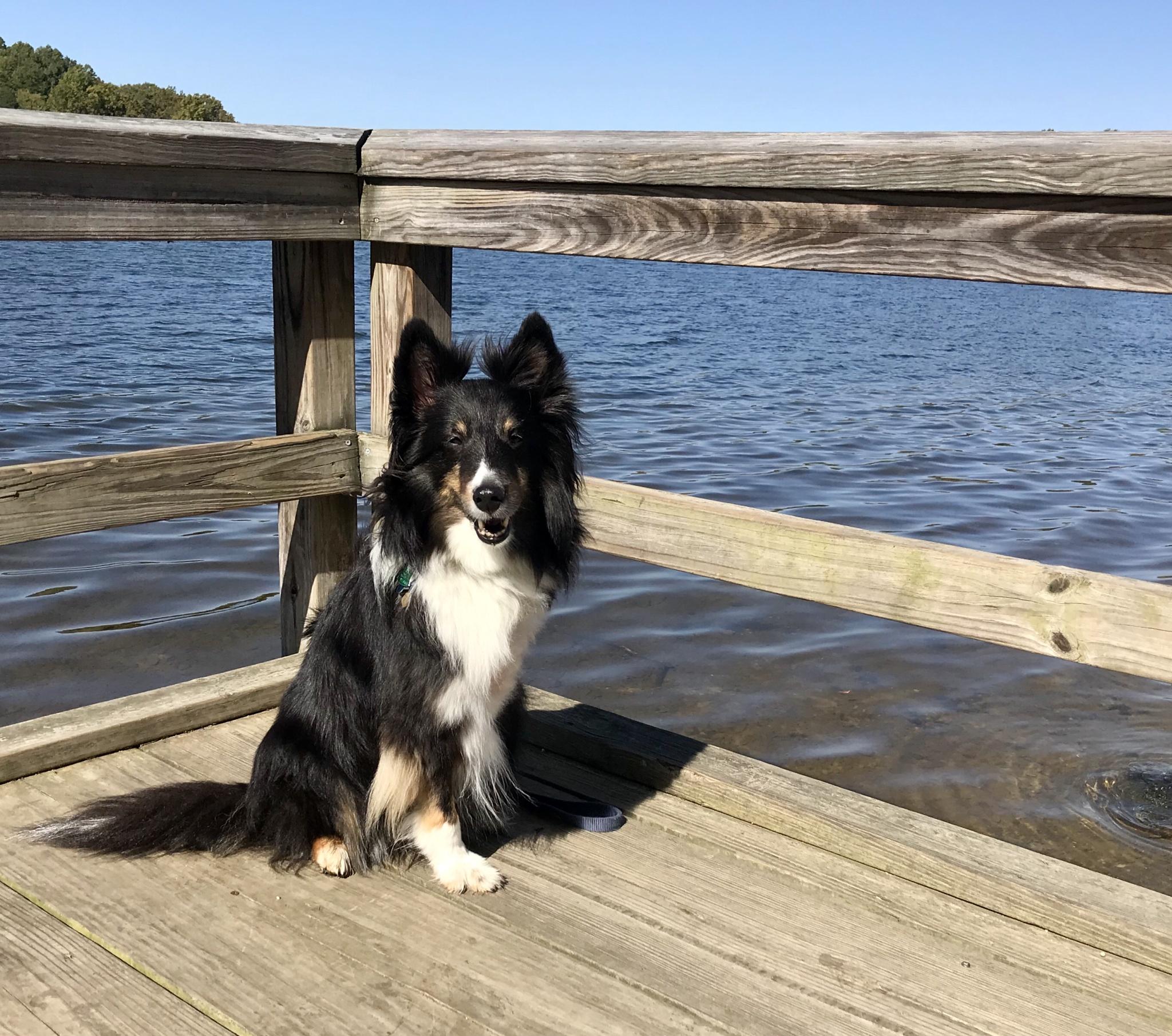 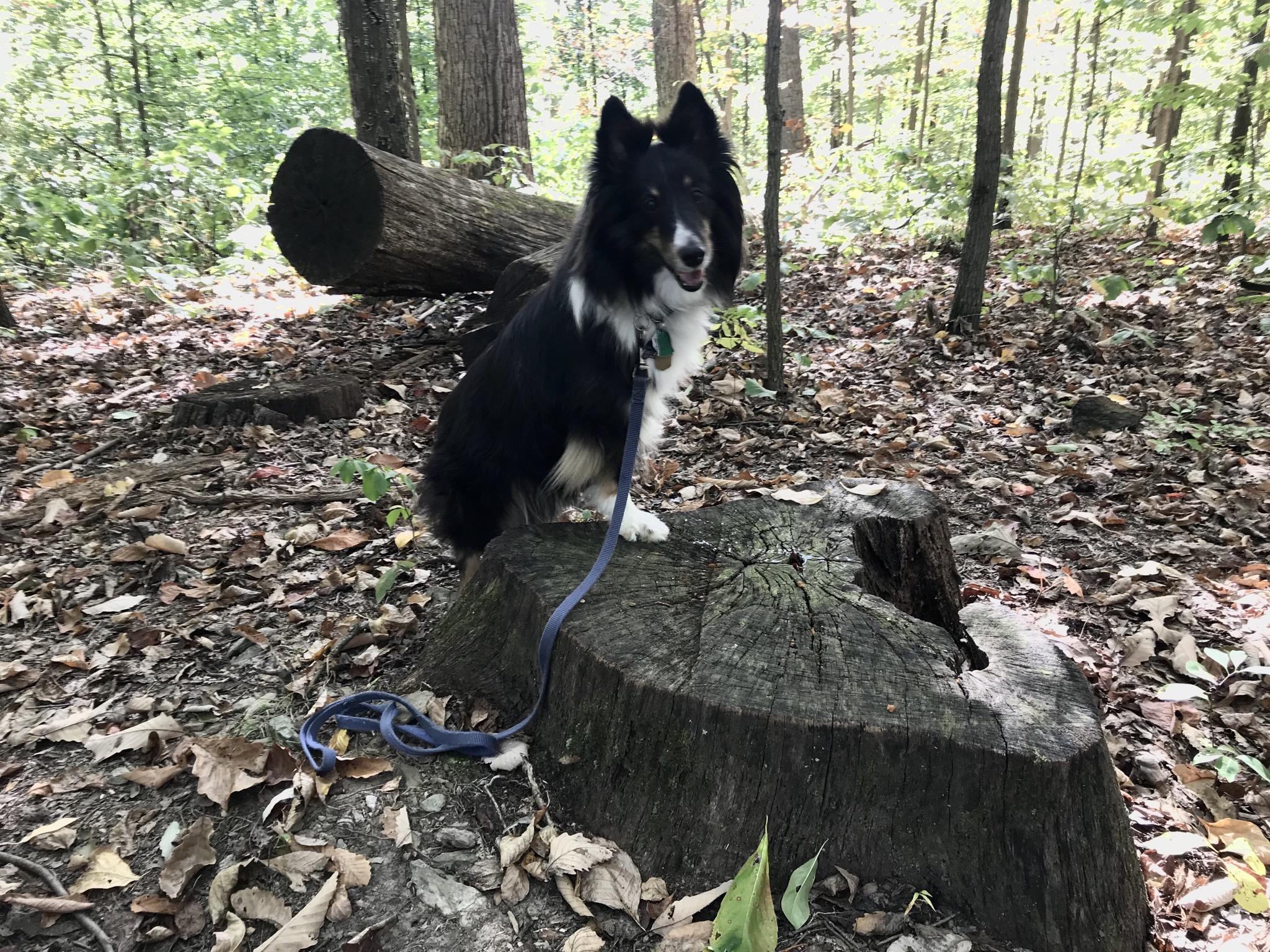 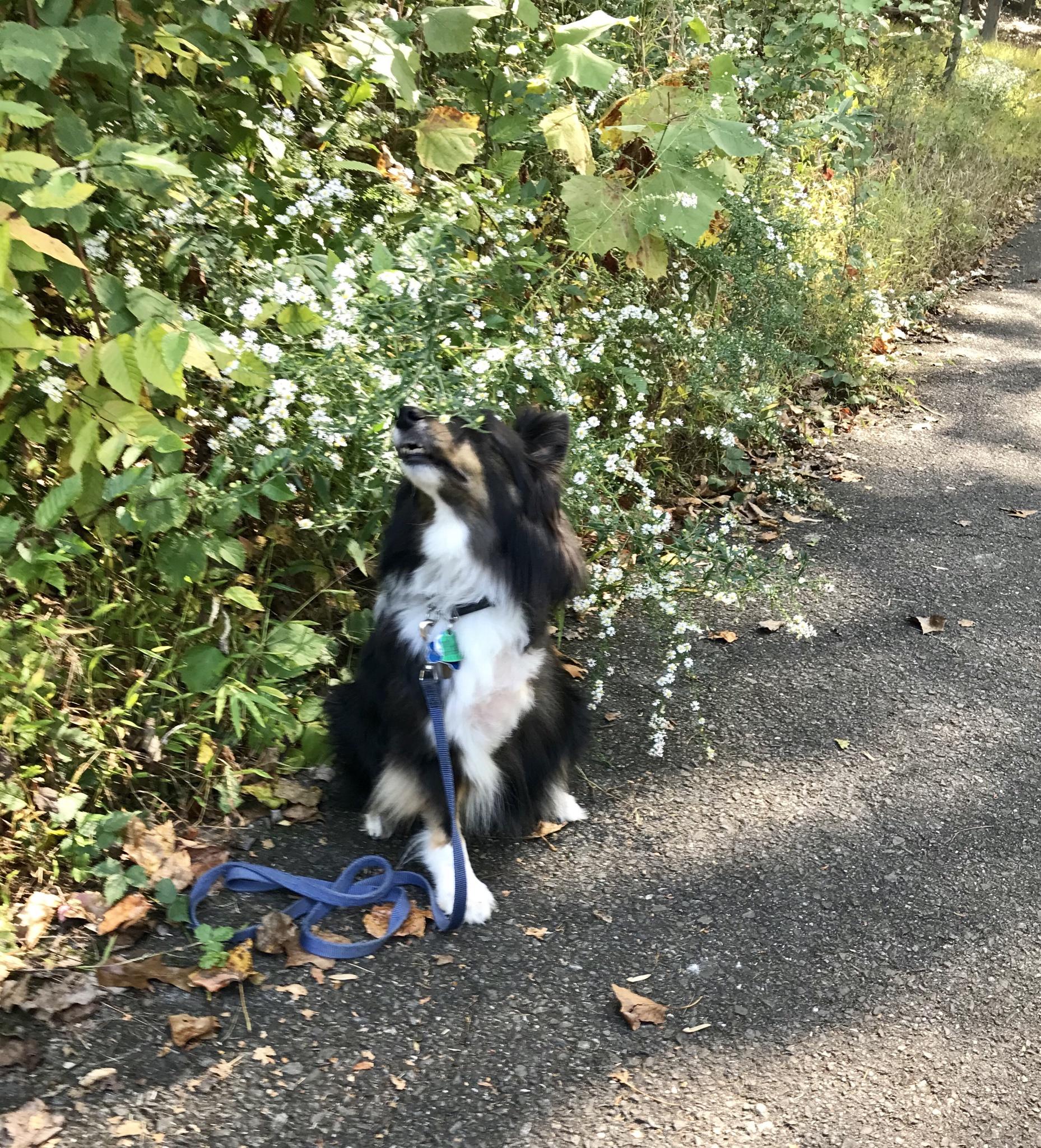 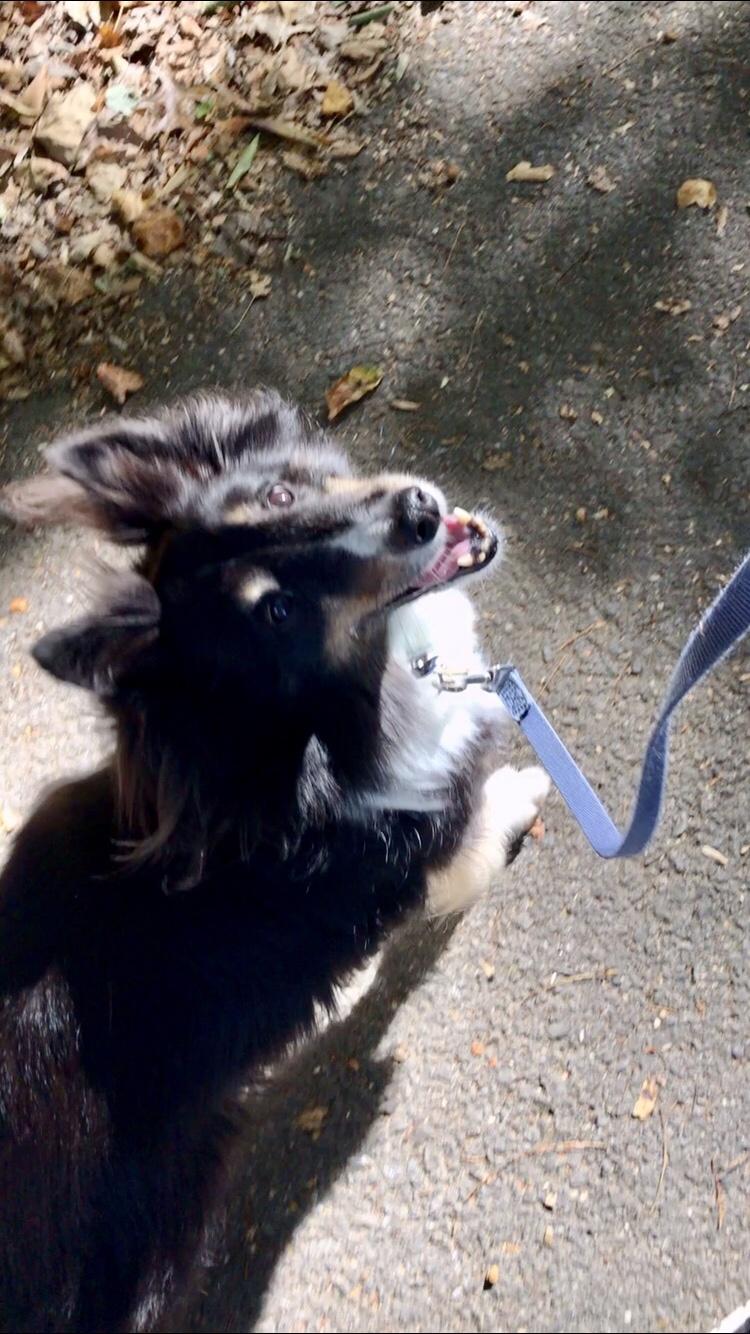 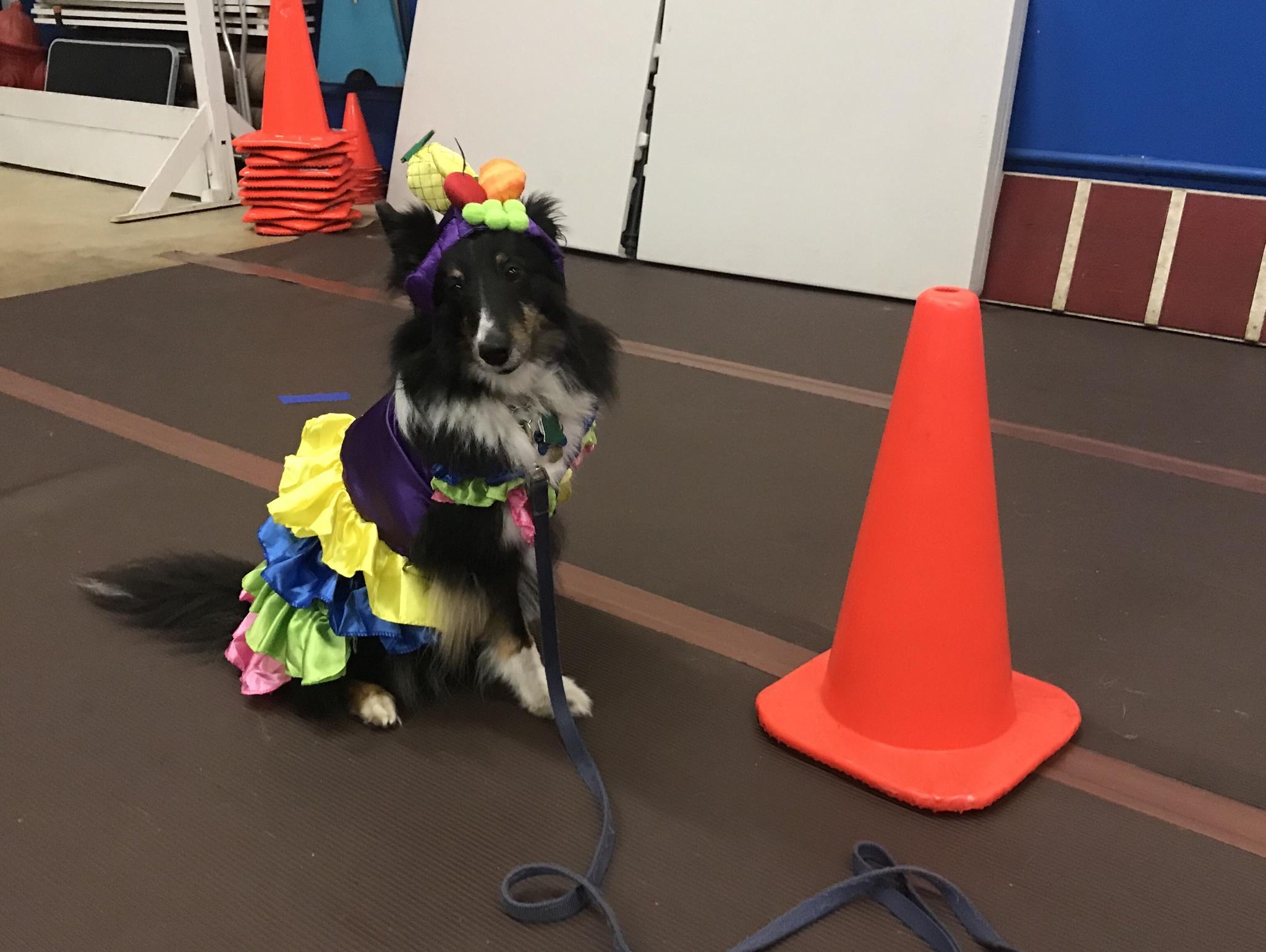 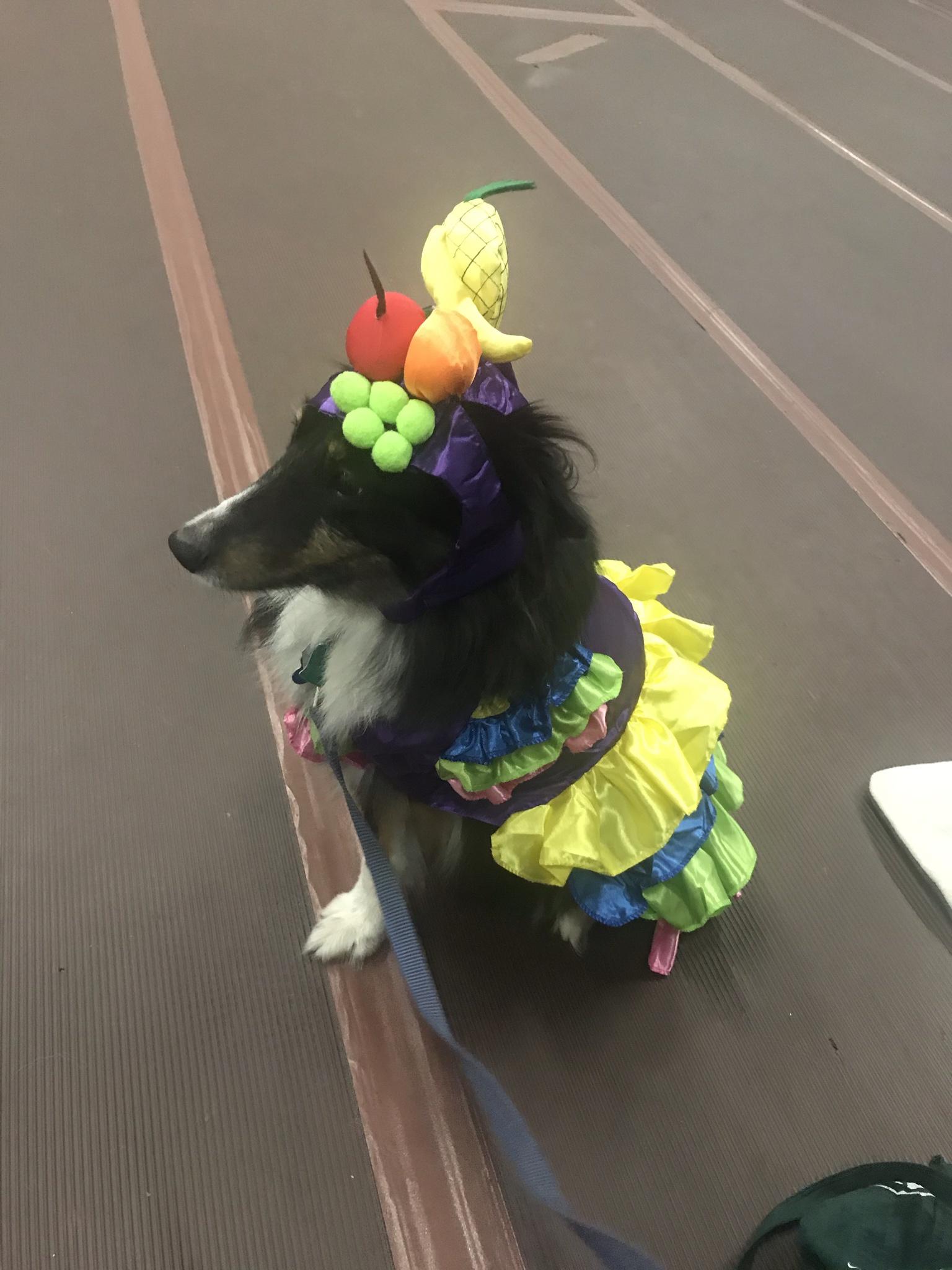 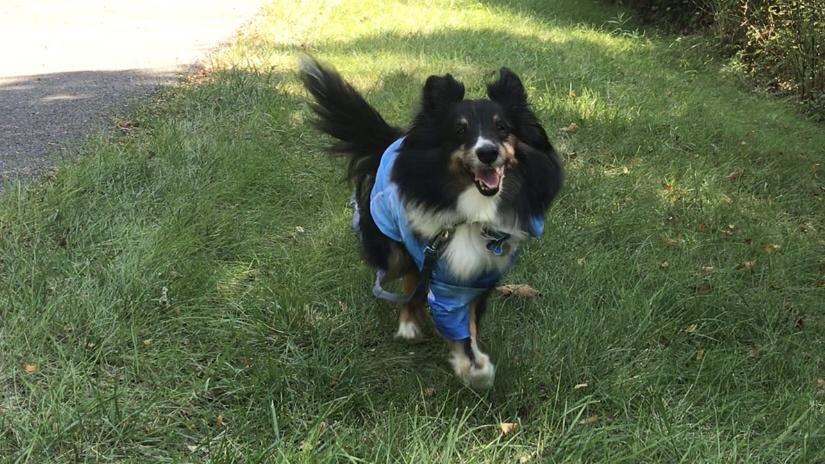 Oh Rucca! You are the most fit, fabulous, young-at-heart senior Tripawd EVER! All your years of staying in shape with your coaches is really paying off. I'm so happy that you bounced back and have the Tripawd life all dialed in. I'm so glad your people came back to drop us a line, this is great news

If you don't mind I would love to share your photo in our gallery! You are so darn adorable!

Thrilled to read this spectacular  update!  Absolutely  thrilled!  She clearly is living life to the fullest now that the pain is gone!  So happy for her and for you!  You are taking such great care of her.

Thos pictures are precious.  I do believe  she likes posing.  Pretty sure she knows how cute she is😉

Love her Halloween costume.  She's actually quite pretty in it.  The colors  compliment  her very nicely😎

You articulated  very well why we do what we do here when you said...

"She’s just Rucca. And that’s exactly what she should be."

Thank you!  Rucca is far too aware of how cute she is and really does love her posing, although she makes sure to demand payment.

I’m sure she would love to be shared as part of the gallery.  All of the dogs and wonderful people here have given me a lot of comfort and I hope that she can do just a little bit of the same for someone else.

And finally, Happy Halloween!  Ru’s Halloween game has always been strong but she’s definitely hoping her encounter with a certain crocodile will net her some extra hot dogs at school today. 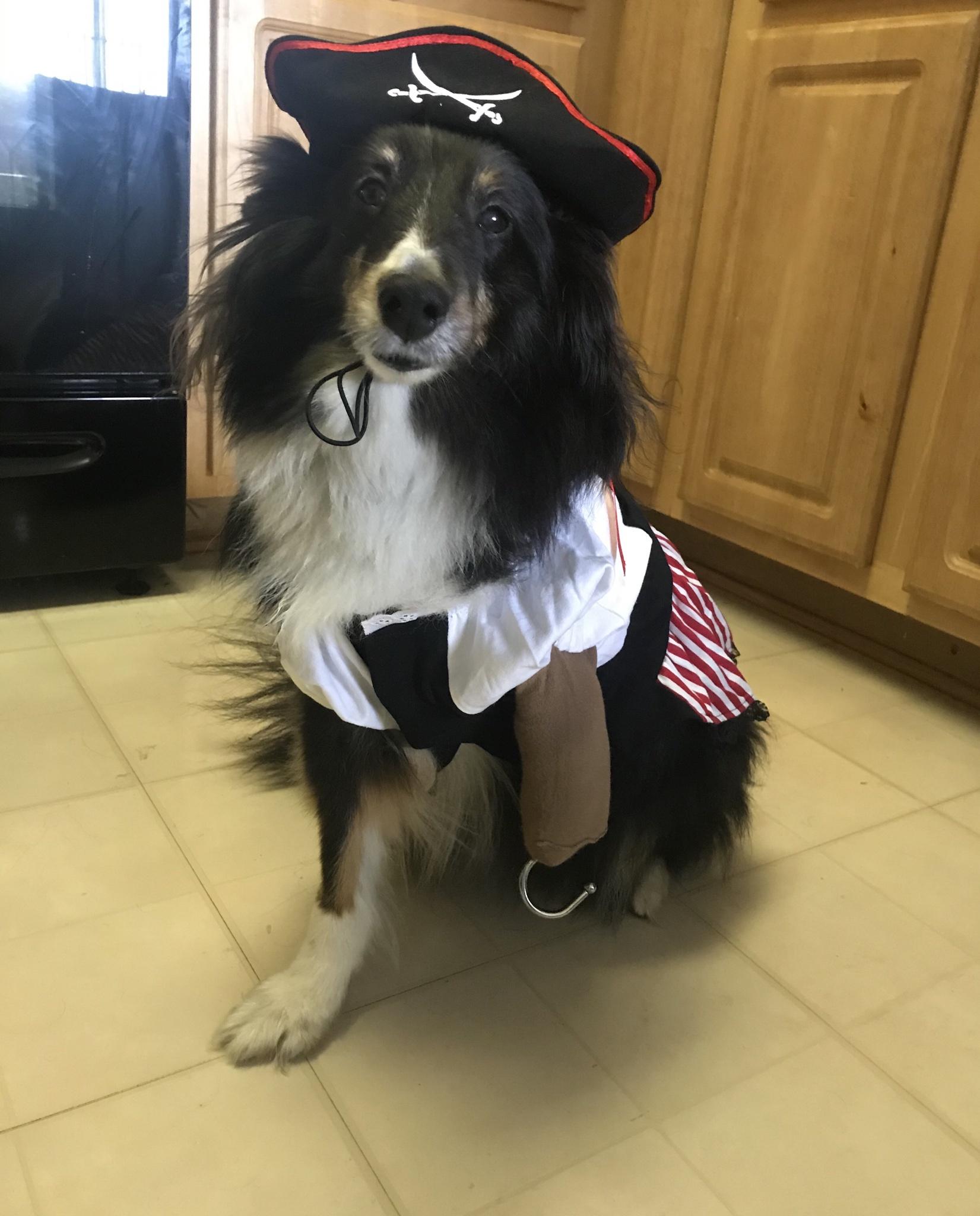 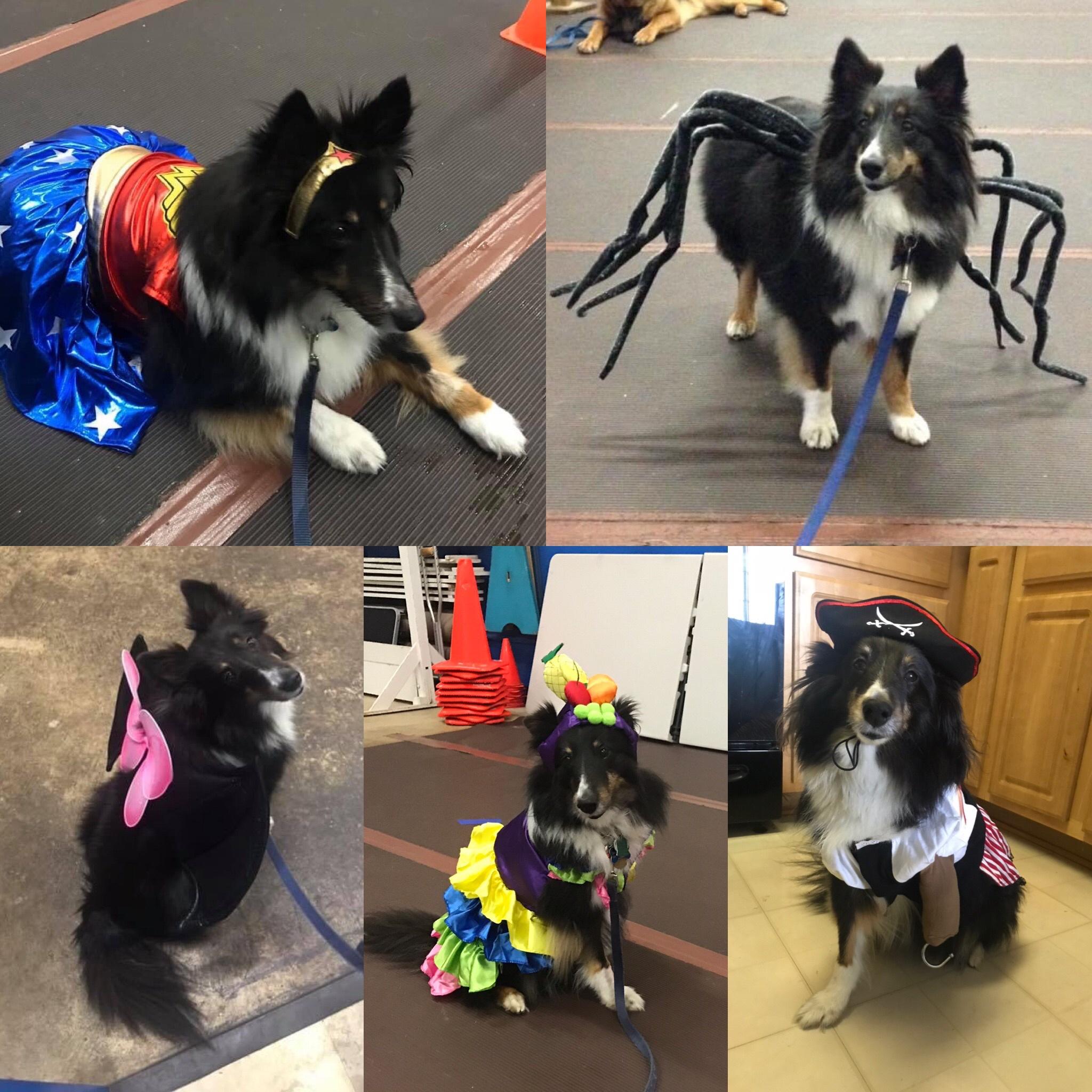 Oh Rucca! Your costumes are fabulous! You must enter our Tripawds Howloween Contest!

How can we pass up a Halloween contest?  Heading over now!

Thanks for the smiles!  Love every  single one of these Halloween  costumes!  You are Super Wonder Woman!!

Kudos to your hooman for being so creative.....and kudos to you for actu seeming to enjoy this whole process!