Are We Ready for the Dog Park?

Rumbles is 6 weeks post-amp. I’m feeling a trip to the dog park might be okay. But I’m not positive.

We also have a small dog and a cat and Rumbles has been playing a bit of chase with them for about a week. So I know he’s feeling playful and a little naughty again.

Most of the dogs at our local dog park are well behaved and/or well controlled. But there always seems to be someone there who thinks the dog park is a fend-for-themselves arena. And I’m not sure that Rumbles is ready for a possible altercation…he’s a lover, not a fighter, but he won’t back down if someone is being aggressive. He is a Boxer, after all.

Any advice on returning to rough-play after surgery?

Just have him wear his football helmet!

Tate was about 6 weeks post-amp when we went to the park but he walks away from rude dogs.  Now he's over 3 months post-amp and he's just getting enough strength to dodge like he used to, and he falls sometimes (he's a rear amp).  So if Rumbles is going to want to rumble, I'd wait until he's stronger unless you can keep him from tangling.  On the other hand, you can always leave if you feel uncomfortable.

With my first tripawd, Yoda, it was easy.  He wasn’t the type to do much contact play with other dogs anyway – he just liked to run with other dogs, otherwise he’d only do brief greetings then do his own thing.  That made it a much easier decision to start bringing him back to the park, and it was barely a month when he first did.  I never had any park problems with him in the four months of good health he had before osteosarcoma overwhelmed him and we probably went an average of twice a week.  But Gerry is a different story, though I did bring him to the park just a month after amputation also, and he did great initially.  He had fun and was polite to other dogs – didn’t slip or fall even though there was snow and some ice.  I hadn’t had Gerry for long before his amputation, and he already had the injury that led to his needing an amputation, so I don’t know if his behavior was any different pre-injury at the dog park, but I suspect not.  Over time I’ve learned that Gerry does seek out contact-play with other dogs and actually seems attracted most to dogs who will get aggressive with him and Gerry too isn’t the type to back down once that starts either and these encounters were occurring every one out of three trips to the park.  Fortunately, I was always able to break them up before any injuries resulted, but it was only a matter of time.  So, sigh, we had to stop going all together.  We are going to try a new class soon being offered in my area called “Dog Park Skills.”  I don’t know if it’ll work for Gerry’s issue, but it couldn’t hurt.

What has been recommended to me previously is to work super hard on “come” so that your dog loves to come running every time you call without hesitation.  That way if you see a possible problem situation at the park, you can get your dog away from it immediately.  Gerry and I got a lot better at it, but it'll take a lot more to get him to ever come when he sees one of those tough dogs he likes.  For what it's worth

Rumbles is 6 weeks post-amp. I'm feeling a trip to the dog park might be okay. But I'm not positive.

Any advice on returning to rough-play after surgery?

Well, I hate to say it but I know that our rehab friends at CARE would say “Don't!” They are super-cautious.

To me, six weeks seems a bit soon for a dog park. When I was about two months out I went to my favorite “dog park” and ran out to the beach. I think i lasted about 10 minutes, but boy was it FUN! And you know what? It really did a lot to pick up all of our spirits too. 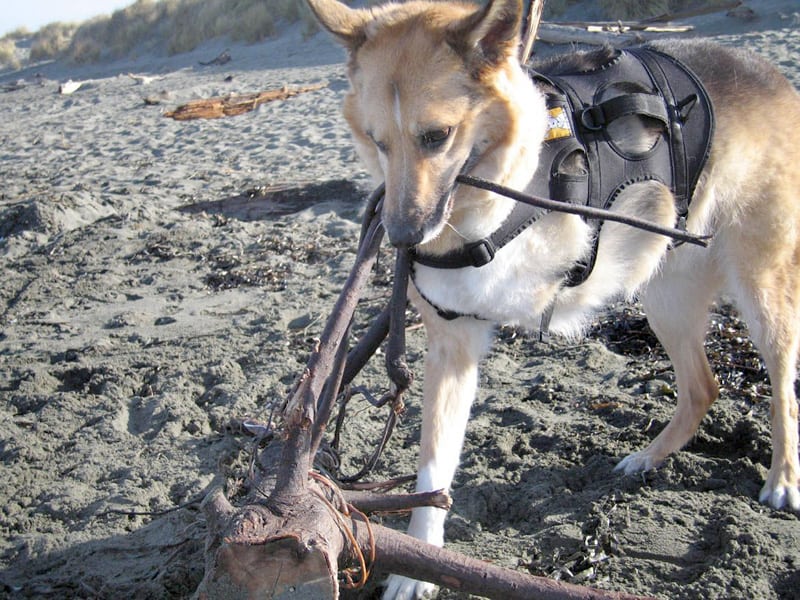 SO if you go, I would say prepare to be there for just a few minutes and if he sits down at all, then that means it's time to go. Something tells me that Rumbles is going to go nuts though!  Just don't let him overdo it and keep that leash handy in case you need to take off if some troublemaker shows up (there's always one at our dog park too, and his name is Wyatt Ray!)

Thanks, everyone. Sounds like we should wait a bit. Appreciate all of your insight.

This isn't directly responsive to your question but thought I'd jsut share our experience:  our “dog park” is off leash in Central Park in NYC so while it has major challenges in terms of lots of other dogs, there don't tend to be the same types of territorial issues between dogs that do occur in our local dog run.

That being said, I found that Ajax re-entered dog society at his own time.  At first, he didn't want to be near any dogs and would avoid and/or give a low warning rumble (rarely heard out of my sweet Lab on prior occasions).  Then, he started co-existing with small dogs and dogs he knew.  Then he started playing with small dogs.  Then he started playing with big dogs who were pre-existing friends.  Now (almost a year post surgery) he has figured out that if the dog is big enough, he can go up on his remaining hind leg, and rest both front paws on the other dog's back (he seems to know which dogs will tolerate this).

I agree that 6 weeks sounds a little too early – I think Ajax wanted to pretty much be left alone for a few months, and then the process above went from maybe 2-5 months?  I can't remember !  I know you don't believe that now, but take heart, it obviously wasn't too traumatic or I would remember it better …Good luck!