Anniversaries of Pups Who Have Passed

It is hard to believe but today marks 1 year since we lost our big beautiful Tazzie girl.  Some days it seems like only yesterday and other days it seems like forever.  We only had her for 7 1/2 years but she made all of them great!  We miss you sweet Tazzie!

Sweet Tazzie Girl, you wil always live on here at Tripawds and in our hearts. A girl like you leaves a big impression!

What an honor it was to meet you. We will love you always.

25 months. It sounds less than saying it's been more than two years now since our Tripawds founder and fearless leader left us … peace dawg. Your legacy lives on. 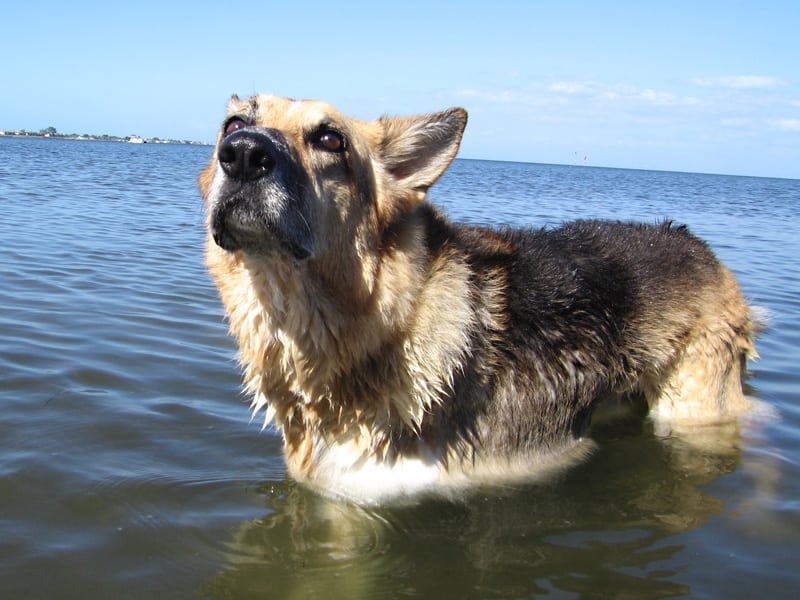 Your legacy certainly does live on Jerry Dawg.  What a man.  Love the photo.

In memory of my sweet Tazzie

Today is the anniversary of some important events in Tazzie's life and mine. Tazzie would have been 10 years old today, December 6. Last year at this time, the NorCal tripawds sent us an Extra Special Birthday Greeting.

In the album I hope to eventually put together, I would like to include pictures of some of our special tripawds friends who shared their journeys at that time – Oslo, Horacio, Shilo, Maximutt, Tika, Jackers, Yoda, Caira Sue – to name only a few. Of course, many of you who came before us (Jerry, Genie, Tazzie One, Wrigley, Cemil, Trouble, Cherry and calendar buddy Zeus . . .) provided so much info and support.

I still miss you Tazzie, and remember you as vividly as ever

Oh my gosh – so many beautiful pictures.  And those action shots are really fantastic.  Ohhhh Tazzie

I started missing Yoda on my way home from work today.  I was working at a location I don't normally, and I passed a gas station where I used to pick up a frozen pizza for lunch on my way back from taking Yoda to the dog park (back when I worked 2nd shift).  I had that little burst of – “I want my puppy back!”

I missed posting about the anniversary of Yoda's passing.  It was October 14th – 1st anniversary.  Gerry has a knack for distracting me with medical issues of his own on big Yoda days.  (Turned out Gerry had 4 fractured teeth that needed pulling and one had caused an infection, but it was suspicious-looking, so a biopsy was thrown in too – negative of course or you all would have heard about it!)  I have a good feeling though that maybe that was going to be the last time he pulls that.  Anyway back to my brave boy, Yoda, who deserves his honorary mention that I missed – 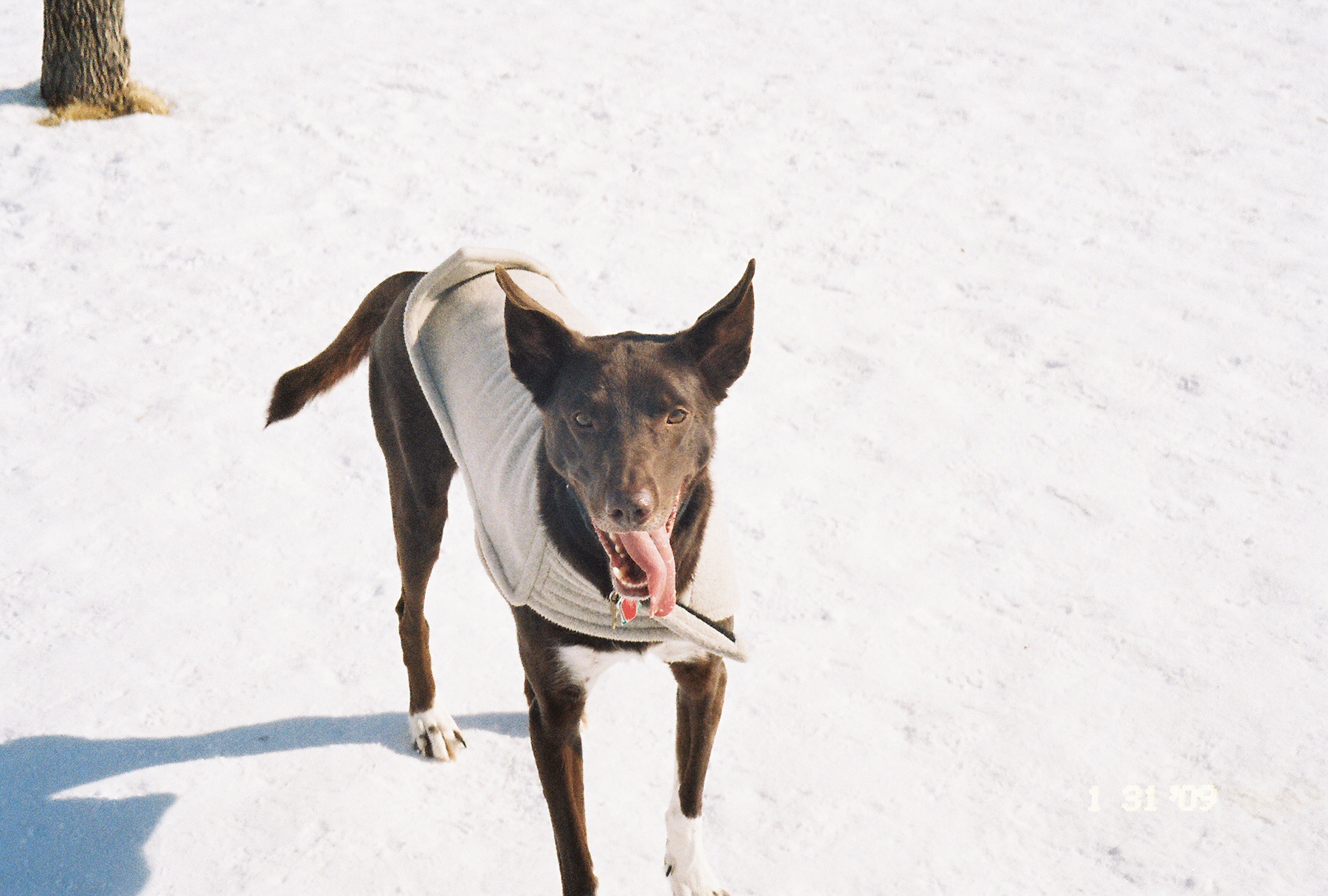 This past Saturday I took Gerry to one of the local Humane Society locations to get his picture taken with “Santa.”  While there, it turned out the person who volunteered to play Santa was a volunteer who I had spoken to before about her three legged border collie.  Of course I didn't recognize her, but it had also been a while and she didn't remember me at first either, until I whipped out a Tripawds business card, so she could check out the site – “Oh you already gave me one of these!”  Heh heh.  Anyway, that led me to bring up Yoda too, which was neat because one of the other Humane Society staff people that was there is the one that takes the shelter animals on the local news to tempt potential adopters.  And she remembered Yoda

Of course, right?  In the first year or so that I had Yoda, I had heard from several strangers at pets stores and dog training classes that they recognized Yoda from being on TV.  Another person had recognized him from the Humane Society's Bark and Wine event where Yoda had been a greeter and dressed up in a tux costume and I reminded her of that and she remembered that too.  So I pointed out they did a great job of getting him seen and remembered.  It's pretty cool to run into someone who knew your dog even back before you did and remembers how neat he was.  She also mentioned that she and other staff had noticed the pictures that came in of him to their calendar contest this year and last year in which he was three legged.  I was glad to be able to pass along, that yeah unfortunately he did pass about 4 months after being diagnosed ove a year ago, but that he did very very well for most of that time.  Anyway…

Gerry gave that good pal of Yoda's from the Humane Society lots of attention after his picture with Santa was through.  Good boy!  Lots of doggie kisses and thank yous for her and all of his big brother Yoda's angels at he Humane Society for taking care of him twice in between owners before coming home once and for all. 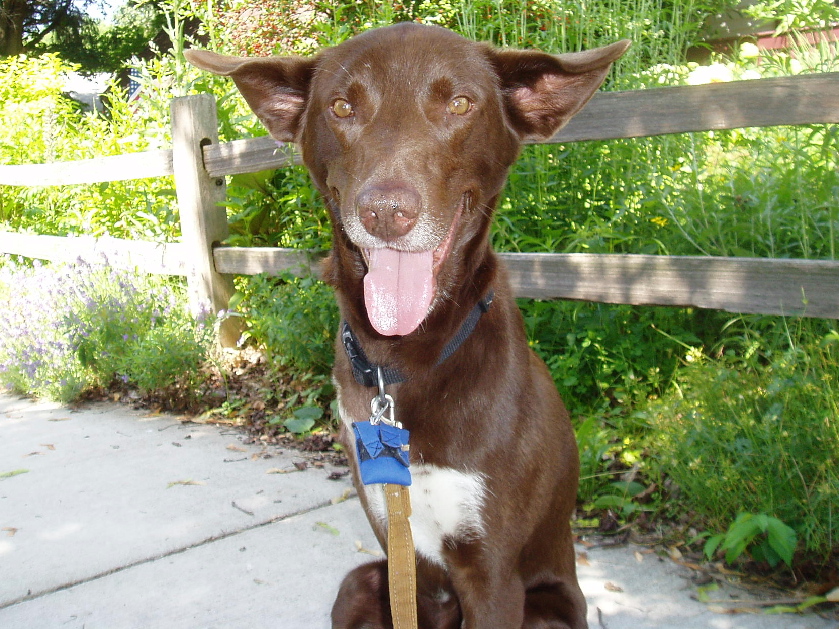 You are MISSED, buddy!!!

Oh you guys, beautful memories of beautiful friends.  Tazzie, happy birthday sweetheart.  And Yoda, you always broght a smile and today is no different. You both will forever live in my heart.  Heros with angel wings….

It is kind of like we are pals together again. Great picture Pal – I haven't seen that one before.

Tazzie and Yoda, we miss you big boys too.

That's a great story Bri. It really shows you what an impact our incredible pups can have on people. Thank you for continuing to spread the word about our 3-legged heroes (let us know if you need any more cards).

Tazzie and Yoda, we know you're looking out for us. This photo of Tazzie says it all:

Shine on my friends, shine on.

Those pics are just beautiful!

I never got to know Tazzie or Yoda but their mom's have always been here in support for us. Fortis and I truly appreciate it. The pictures and the stories are wonderful. Thanks for sharing guys.

As I looked through the photos of Tazzie, I understood exactly what Susan meant when she said “He simply got along with and loved everyone, and everyone loved him.” What a special boy Tazzie was.

Yes, Gerry, watch out for those teeth! Otherwise, you might be reduced to eating ants and not much else! (well, maybe baby food and that ain't so bad for a dog).

Thanks Fortis – too bad Tazzie can't be at your tripawd parties when you meet Zip and Wyatt. He had a way of keeping dogs that are normally aggressive from being aggressive. No apparent reason for this talent, but it was obvious enough that the doggy daycare and places where he boarded used him for that.

But don't be misled to think he was a total wimp. He'd come charging at people or little animals from a long distance away and make three deep barks as he did this. Then, once he was within 1 to 2 meters, he would just stop and relax (by that time, one elderly woman had fainted, but most people didn't get too alarmed). I guess it was his Pyrenees way of getting people and animals to stay in one place – or maybe it was just a short-circuit in his brain that was eventually overidden by the border collie.

Hey – all those pictures on the beach were within a few weeks of his passing and after a full day playing on the beach (hence the sleepy eyes). Like most tripawds, he did great until he was ready to leave. Yoda is sure bright and bushy in his photo!!

One year ago today… we miss you, buddy, and we'll love you forever. 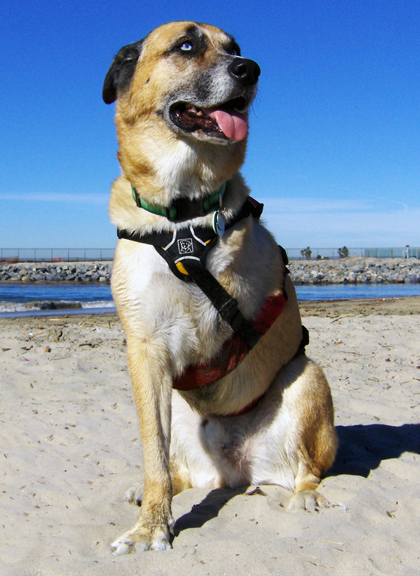 Rock on Maximutt, rock on.

We will love you always.

Watch over tripawds everywhere.  Your memory lives in each ampuversary we celebrate.  Forever in my heart.