Why is it that some Tripawd dogs and cats have a stump when other don’t? Is it better to leave part of the leg or take all of it? Should the leg and scapula go, or just the leg?

After talking to vets and prostheses makers through the years we’ve learned the answer to that question is that it depends on the animal’s condition.

Not too long ago veterinarians were taught that taking all of the limb was the best idea. The belief was that a partial limb would cause balance and gait problems if the animal tried to use the stump. But now that’s not such an automatic decision.

Pets with Cancer in the Leg

A full limb amputation surgery on a dog or cat is more complicated, time consuming and risky than a partial limb amputation. But if a pet has cancer in the leg, a full amputation is often required in order to get wide margins around the tumor.

There are exceptions for pets with cancer in the leg: sometimes surgeons can leave almost all of the affected leg by performing limb sparing surgery. This procedure removes the tumorous area and replaces it with healthy bone from a donor and bone graft from other parts of the patient’s body (see OncoLink for more details). Still, not every animal is a good candidate for limb sparing and the high cost of the procedure rules it out for many.

What About Dogs and Cats without Cancer?

Animals like Cleo the Malamute who don’t have cancer but need a damaged leg removed have more options. As we said, vets used to remove all of the affected limb no matter what the circumstances, but once again that thinking is evolving. New orthopedic studies along with advances in pet prosthetics are encouraging veterinarians to give pet parents the option to leave as much of the limb as possible, especially if they think that a prosthetic is in their future.

The question of whether or not you’ll want to try prosthetic limb for your pet needs to be addressed before amputation surgery. Prosthetic limbs need a significant bony area to grab onto. If a Tripawd doesn’t have the right amount of limb left over after amputation, a prosthetic is never an option. 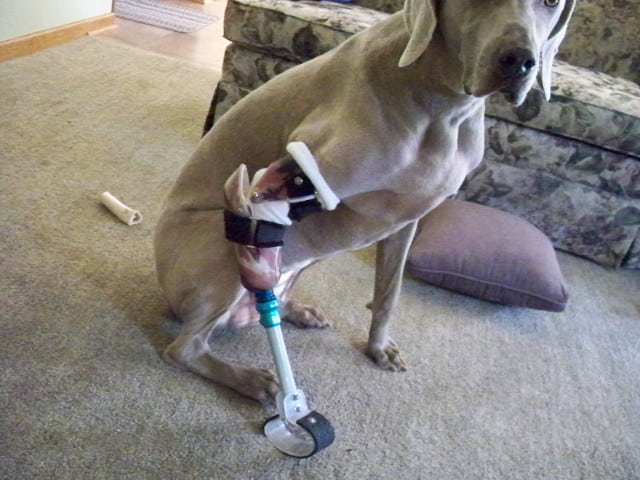 Hopefully some day prosthetic limb implants for pets (referred to as “Osseointegration“) will be more common. Until then, today’s prosthetic legs require daily training and a chunk of money. But as our discussion with OrthoPets revealed, prostheses can significantly improve quality of life for three-legged animals.

Even if a prosthetic isn’t in your pet’s future, a partial limb amputation can still be beneficial. Today’s vets are  starting to think that a partial limb can actually help with balance and mobility. That extra limb can give the Tripawd an extra boost in certain situations, like when getting off the floor, leaning on objects for balance, etc. We aren’t vets, but that idea is still debatable to us, based on what we’ve seen among our membership.

If a partial limb amputation doesn’t have adequate skin left at the incision area, complications can occur. As these Tripawd parents discovered, it can be tough to heal the thin-skinned incision area around a stump. Several of our members with partial leg amputations have experienced poor wound healing and required a second “amputation surgery correction” to remove the rest of the limb. 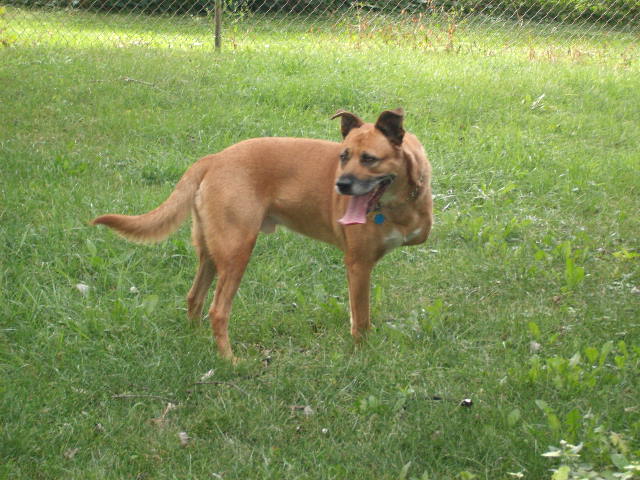 “They Call it An Amputation Correction”

Our second tripawd, Biff, came to us with a small stump remaining of his left front leg. He has been with us now for almost two years, and the stump has become more of a problem. It has atrophied, and it pulls on his spine and puts extra pressure on his remaining legs. The muscles in his shoulder make him think he has a full leg, and that causes confusion in his gait. As you may or may not know, dogs put 60% of their weight on their front legs. Therefore, a stump in the back is not as much of a problem as a stump in the front.

“She should have had the scapula removal in the first place.”

Vet Y said the bone was actually pushing through the incision, which is why the staples had popped.  They had to completely open her back up, shave down the bone, and stitch her back up again. . . Over the next week the top puncture healed nicely, it stopped oozing and all was looking good.  But just one fall, and the incision was opening again.  Just a little and not bleeding but it was there.

We never had any issues with Sam’s stump–he was able to navigate in the house, up and down stairs, around corners, in the woods and underbrush, etc. fine. And he never had any problems lying down on it (started doing it after only a couple days, in fact…I had to put towels down so it wouldn’t make a mess :D). If you’re not sure whether or not to leave all or part of your dog or cat’s limb, be sure to get a second opinion from a board-certified orthopedic surgeon who works with prostheses designers on a regular basis. These experts are best equipped to give you an honest evaluation of the pros and cons for each type of amputation surgery based on your animal’s unique situation.

What Is The KillBarney Tour?

Get the KillBarney Tour Book for photos and stories of Tripawds members around the globe!