Many thanks to everyone who submitted a photo for the 2014 Tripawds Calendar Project! By Friday’s deadline we received 61 fantastic photo entries from Tripawds members around the world.

But we have a problem: 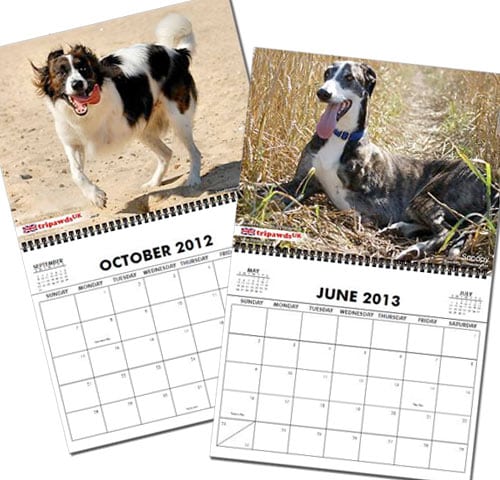 Originally, voting to select the 12 best calendar photos was going to occur via the Tripawds Facebook Page. Unfortunately we didn’t think this through before we wrote the rules. We learned this voting process would exclude some Tripawds members who aren’t on Facebook. We don’t think this is fair. We also really want everyone to be included.

So, we hope you don’t mind, but in order to make sure everyone is part of this year-long celebration of Tripawd Power we decided to scrap the voting process altogether.

Everyone who submitted a photo by last Friday’s deadline WILL get into some kind of 2014 Tripawds calendar!

Whether it’s a month-by-month, a calendar poster or a weekly planner, all photo entries will be included in one version or another.

Tripawds Admin Guy is working hard to lay out the different calendar designs. Yes, you will be able to know which calendar features your own Tripawd hero.

We’re sorry for any confusion, and we hope you think this is a good idea. Since 2006 we’ve struggled with choosing which photos to include in our annual calendar. So far, this seems like the fairest way to make sure everyone who took the time to submit a photo is included. We hope you agree.

Stay tuned for more details about The Tripawds Calendar Project!