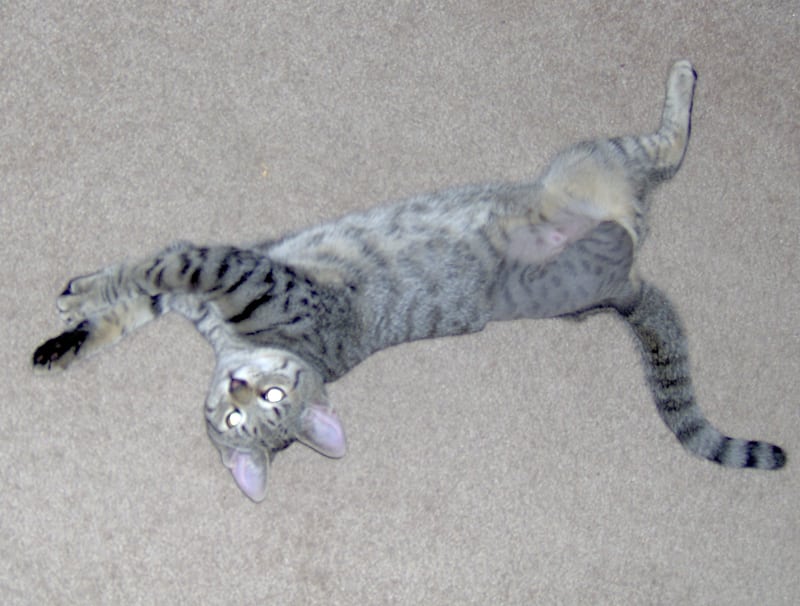 When my people and I helped out as workampers at Safe Harbor Farm for a couple weeks, I was outnumbered by cats. Now, I haven’t cared much for cats ever since I was attacked by a couple kittens years ago. But I mean I was seriously outnumbered here! So I behaved myself and got used to them.

When we volunteered at an adoption day, we met some cool cat people. And when I heard about Nemo, who only has three legs himself, I figured he must be pretty cool too. So maybe all cats aren’t that bad. At least those with three legs are OK by me.

Nemo is about 2 years old. His Dad says:

I was a police officer with Morehead City, and the animal control officer knew that my wife Theresa and I rescue cats so she brought a cat carrier into the police station to find me. A sanitation worker had found four little kittens and when she picked them up, she noticed they had birth defects. One had an inverted (pigeon toed) front left paw, one had a pigeon toed rear right leg, one had no defects, and a little striped tabby had a rear right leg that was completely backward. I couldn’t let them be taken to the shelter, so I brought them home, and set them up in our bathroom.

We named them Simon, Isabel, Switch and Nemo. Nemo’s name derives from the fact he was born with a special “fin”. Nemo would try to play just as much as the other kittens, but he had to walk on the knee of his back leg, and his little paw wasn’t getting much blood and I was afraid it would die completely. I padded the floor with sheets and towels to prevent his knee from being hurt and everyday I would sit in with them and massage his special leg to bring blood to his paw. Every chance I had I slept in the little bathroom with them.

We quickly found homes for the three of them, and Nemo moved to a bigger room. His knee developed a large callous and sac of fluid. He would constantly get his leg hung up on everything, he wouldn’t use the litterbox- I set a towel on the floor for him to use. We took him to get three surgical consults, and decided the best thing for him was to have his leg removed.

For 10 days I kept him in my lap, and full of pain killers. For several weeks he continued to have phantom pains every so often, and I would hold him and scratch his neck to get him to focus on that instead. After his recovery from surgery I called Lynn and let her know that we were going to keep Nemo (or in my exact words” someone can adopt Nemo when they pry him from my GI Joe Kung Fu grip”).

Nemo spends a lot of time tucked under my left arm, he loves to be picked up and held. I walk from room to room with him under my arm. He is the fastest cat in our house, he loves to run and climb up the numerous cat trees we have in the house. He loves to play string game, chase the laser pointer and harass our poor dog. He likes to climb our curtains too. He likes to always know where I am, and more often than not is laying near me.

He and I really have a special bond that I haven’t found in our 13 other cats. He has grown since being a kitten, but he is still very small for a 2yo. He is my baby.

Anyway, here are some more photos of our stay at Safe Harbor. Click on the images to check out how our new gallery plugin works and let us know what you think.

2 thoughts on “Tripod cats are cool by me.”