Meg is now a tripawd

What a BEAUTIFUL picture!! This is bliss! This is living in the moment! This is enjoying the now!

I'll share with you a sentiment that a member posted after their dog transitioned. The only regret she had was she wished she hadn't spent so much time worrying about the tomorrows, instead of staying in the present free from worries, just enjoying the gift of the now. Don't let that be a regret.
Make that vow to yourself and to Meg right now!

I LOVE that picture!! It speaks volumes about happiness! And good for you for giving her a change of scenery where she can cont a sense of normalcy. It's a win/win for both of you!

You are making HUGE strides! Give yourself some credit, okay? This is not easy but your inner strength is coming shining through!!

Celebrating a great day in the farm with Meg with a bowl of CHOCOLATE ice cream!

17 days now since the op and Meg is on fabulous form, in the river and up to all her old tricks. The challenge is getting her to take it a bit easy and give her body time to adjust. For the first time in just over a year, she's no longer on any pain meds and she does not appear to be in any discomfort. I can't begin to express the admiration I feel for my gorgeous girl. 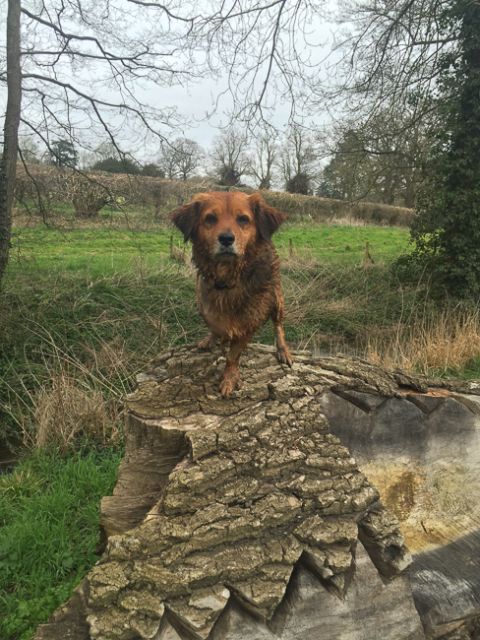 Oh Meg!!! You melt my heart with every singlemphoto and glorious update!!!! To be pain free after all this time is a MEG MIRACLE!!! 🙂

Living lofe ro the fullest is what it's all about and you are doing that BRILLIANTLY!!

Huge smile on my face! HUGE!!

Lots of love! Keep these great updates AND photos coming!

Great photo! It sure captures her adventurous spirit. And as much as you admire her, you need to pat yourself on the back too for having the courage to amputate. It is never an easy decision and you stuck w/ her and didn't give up. So enjoy the time together... it is why we all go through this.

Active 10+ Pyr mix suddenly came up lame with ACL tear in left rear leg. Scheduled for a TPLO but final pre-op x-rays indicated a small suspicious area, possibly OSA, which could have caused the ACL tear. Surgeon opened the knee for TPLO but found soft bone. Biopsy came back positive for OSA. Became a Tripawd 9/18/14. Carbo6 with Cerenia and Fluids. Pain free and living in the moment. Crossed the Bridge on 7/12/15 after probable spread of cancer to her cervical spine. A whole lifetime of memories squeezed into 10 months. Here's her story: Eloise

Someone has a bath coming!  😀

And we admire her too! What a beauty!

Count us as members of the Meg Fan Club, she's truly remarkable!

Now how that heck did I miss this thread???? I LOVE MEG! She is so photogenic!!

Thanks for your comments and support. It's so lovely to feel part of a community and has meant the world to us over these past weeks. I just wanted to post an update, as I realised that we are now 25 days post op. Meg is on great form. She seems happier and more full of spark than she has done in a year at least. It wasn't that she was miserable before, it's just that seeing her now I can see that her joy is fully back. It's like a photo. You can't really tell if it's just slightly out of focus, until you twist the lens slightly and suddenly it's like WOW! Meg is now in fully focused WOW mode. This brings it's own challenges certainly... yesterday when I took her to the rehab vet, she jumped in the lake at the service station. For the past eight months, she hasn't been allowed in water, as she had an open wound on her leg, caused by an infection we were unable to get rid of. She's been in a couple of times recently, but it was like at the services she suddenly remembered, OMG WATER! I LOVE water. She was running up and down in the edge of the lake, splashing and barking and generally so giddy with excitement there was no way she was going to listen to me calling. A crowd of spectators gathered to watch. When she finally came out and they saw she had three legs, they were gaping in amazement. She slopped around in the mud for a bit, then rolled on a dead fish and finally came back to me.

The rehab vet was pleased with how she's doing. We've been working hard on building her core strength, and she can now stand with all three paws on the wobble cushion, while I feed her treats and she can also do a (very short) two leg balance. I think she's just amazing and I'm so so proud of her. 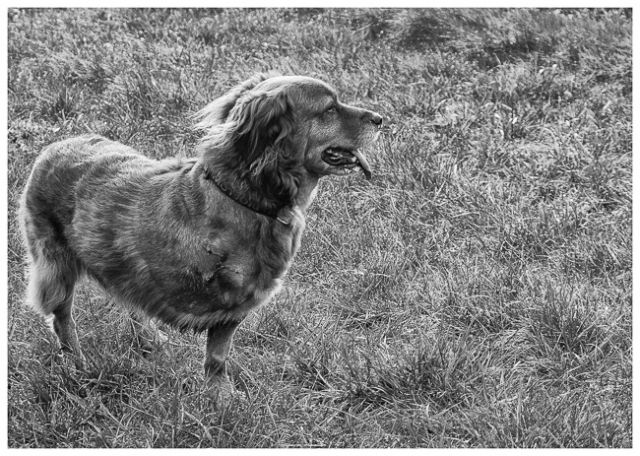 She slopped around in the mud for a bit, then rolled on a dead fish and finally came back to me...

..The rehab vet was pleased with how she's doing.

Was the rehab vet pleased with the mud and dead fish smell?

The camera focus is a great analogy!  I've seen it in my pugs a couple times- Obie's first knee surgery is a great example.  He was happy and doing his thing and he never limped or yelped.  We was so much happier after surgery, even during recovery.

Meg need her own section in the gallery!

I love your updates!  So many of us have cancer hanging over our heads, so it is great that Meg's amputation is the beginning of a great life!  Sky's the limit for you both!

And we thing Meg is amazing too and we are proud of her too...and her Mom!

I also @pves these updates! And the visual of Meg so happily returning to the lake is such a beautiful image! And you can bet that everyone who saw her that day...and any day...will be tpuched by her unbridled joy in three legs @iving life ro the fullest!!

Just really glad we can't smell the stink through the computer!

Now I know this is very silly but... Meg and I made a little film to celebrate her five week ampuversary, and we just thought we'd share it with all you fabulous people who've been so kind and supportive.

This is so great!  You would never guess Meg is a Tripawds, or that her surgery was just five weeks ago.  You must be so happy and proud of her!