I wish the news was better to share, but unfortunately it’s not.   I was waiting until Monday, 10/28, to post happy news about Charley’s big 3 Year Ampuversary, but I guess that wasn’t in the cards.

We just left the oncologist after Charley’s 3 year follow up for osteosarcoma…. and I just got done crying, for now.

Dr. Buss found a 3 cm hard lump that’s moveable close to Charley’s amptation site.  He aspirated it and he doesn’t like the look of the cells and it’s definitely a cancer.  He thinks it’s either a soft tissue sarcoma or an OS met.  We’ll find out tomorrow when he gets the pathology report back.

We go back Wednesday morning to meet with the surgeon as long as it’s a soft tissue sarcoma.  It would be an aggressive surgery to remove it since it’s close to his amp site and a lot of the tissue has already been removed, but we are willing if it’s a possibility.  We are not giving up on Charley now, just like we didn’t give up on him over 3 years ago.

The positive news if there is any is that Charley’s chest rads appeared clear, but we’re waiting on confirmation from the radiologist.

Please keep Charley in your thoughts and prayers.   I’m devastated…

My thoughts and prayers are definitely with you and Charley. He’s such an inspiration. He means so much to all of us.

Maybe this won’t turn out to be the worst case scenario. And Charley is proof that numbers don’t mean anything anyway.

Sending you love and hugs!
Carol

Thanks for creating this!  I’m subscribing and will be partially holding my breath until you post more.  What a night.  Come on, Charley!  You got this, pal!!!

Keep fighting Charley.  We are all pulling for you.  We are praying if it is the nasty C word that is its the lesser of 2 evils

I am so sorry this is happening, I will be thinking of you and Charley and praying for the best prognoses for Charley.

I posted thison your blog, but wanted to “re-share” it. Odd how these things happen.

I saw Misty’s post today and wanted to go back through her journey to get to know Miaty better. This quote was on Misty’s post when she fou d out she had mets after amp. It was rom Shely’s mom

And that’s how Misty and Shelvy and every single angel dog here continues to reach out and touch loves!

CHARLEY! You keep on keeping on! We STILL have a big three year ampuversary to celebrate!! And it’s gonna be huge!!

Look forward to your post MONDAY with some ore of those wonderful photos from yoir blog! We love that hapy-go-lucky Charley!! And we love you!!

I am hoping for the best possible outcome in the path report.  No matter what comes back Charlie is still here and he (and us) will celebrate his 3 YEAR survival mark.  Charlie is a true warrior and an inspiration- nothing can change that.

I just wanted to stop over here to say how much we are thinking of you. We know you won’t give up on Charlie – you never have and you never will. Lots of good thoughts and love are coming your way.

K, an 8 year old chocolate lab, was diagnosed with osteosarcoma of the radius and ulna on 12/23/11. She had stereotactic radiation to kill the bone tumors, and 3 rounds of carboplatin. On 3/16/12, lung mets were found. We tried several different kinds of chemotherapy to slow the lung mets but none worked. Finally, mets appeared at other sites, including her spine. She earned her angel wings on July 15, 2012. K changed my life, and I'll never forget her. Our/my journey is chronicled at romp-roll-rockies.blogspot.com.

I’m effing pissed. Sorry. I can’t help it but this is crap. I know it’s going to be good news I just do Ellen. I have to believe that for you guys. Charley is one of Jills biggest heros and we are pulling for you. I’ll be keeping you in my thoughts all day tomorrow.

All my love,
Erica

Tucker, a chocolate lab “brother” and I are praying for you both over here in Canada.

Charley — you can BEAT THIS!  Daisy and I are keeping all paws, fingers and toes crossed that this is just a bump in your journey.

You have the entire Tripawd Nation standing with you.  We are sending our best thoughts, wishes, prayers, and juju your way.  Keep up the good fight!

Charley, the entire Tripawds Nation is sending you positive thoughts!  Hang in there buddy!  Praying for the best possible outcome!!!

It looks like the pathology report won’t be back until Monday 10/28 (which is ironically his 3 Year Ampuversary).

We tentatively scheduled Charley’s surgery for Thursday 10/31 with the same surgeon that did his amputation 3 years ago, pending the pathology results.  Depending on the path report and the surgeon’s physical exam of how operable the tumor is, Charley may need an MRI on Friday and then surgery the following week.  Worst worst case scenario is that the tumor is inoperable.

We are still praying and hoping that this is an operable soft tissue sarcoma and not a return of the osteosarcoma.

Thank you for all of your prayers, positive thoughts, hugs and kisses. It is greatly appreciated and I can’t thank you enough for your support. 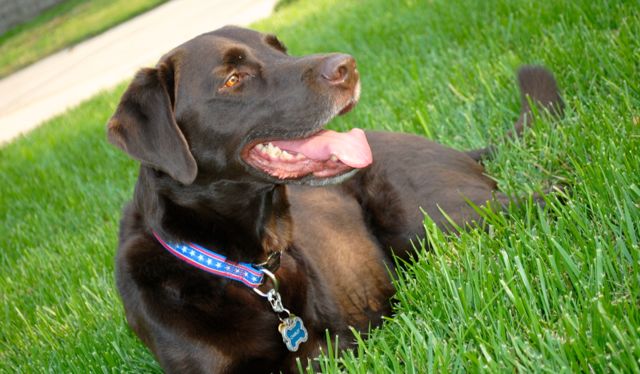 Hang in there Charley and Ellen!  Sending “chocolate Labby” hugs your way!