This is such an amazing idea. I have just lost my wee tripawd and would love to send a ribbon. Where do you send it?

Christa said
I have just lost my wee tripawd and would love to send a ribbon. Where do you send it?

So sorry for your loss…please see this blog post with complete details:

FYI: If you register, your forum posts will not require moderation.

Christa, so sorry your wee tripawd has transitioned. When you can, please share more. We are all family here and all dogs and kitties matter to us.

Making a ribbon for my Happy Hannah was bittersweet, but I also found it comforting and felt very connected to her when I made it. Maybe you could post a picture of what you made before you send it off.

Sending you lots of love and hugs from your “family”.

Sally and Alumni Happy Hannah and Merry Myrtle too!

Thank you both sorry in late reply couldn’t find where i’d posted this question. Just stumbled on this website on seeing a calendar add somewhere else. not really feeling chatty just now, pity I hadn’t found this site before. Will check the link for ribbon info thank you

Oh your in America, i’m in the UK. What a shame.

Christa- please still send a ribbon, we would be honored to add it to the Leash.  It might take a little longer getting here, but the Leash represents Tripawd and Tripawd Angels from everywhere!

oh may I that would be lovely thank you

Howldy Folks! If you’ve joined us within the last few months you may not be aware that we have this awesome Tripawds Tribute Leash project. Please scroll up through this discussion to find out how you can participate and add a ribbon for your Tripawd Hero. We have a big event coming up in September at the Puppy Up Wheaton Illinois walk, so make sure to add your ribbon soon!

I finally found the PERFECT addition for Murphy’s ribbon. As soon as it gets here, I’ll get the ribbon in the mail.

Can’t wait to see it and add it to the leash.

This is a great reminder that I still need to make one for Shelby!! I’m heading to our favorite coast next week… perhaps my creative juices will feel inspired!

I think it just may be!!😀 I was thinking of Murphy the other night. I was cooking green beans with 6 brown eyes staring at me. The only taker was Lucy. She ate 3. My husband said that he did not think dogs liked green beans. I told him, yep, some do. 😊

TY GUY, Best Black Lab ever! Diagnosed  and had amp in January, 2014. Kicked MRSA's butt. Earned his angel wings on April 16, 2014. Run Free my boy and don't forget a shoe. Ty is a proud member of the " April Angels". Ty sent us Daryl, a Tripawd rescue in Sept. of 2016. Daryl is 5 +or -. We are also Pawrents to Chandler, a Border Collie mix who is 15 and 1/2, Lucy, a Corgi who is 7, 2 minis, 2 horses, and a feisty cat named Zoe. Zoe had a non skeletal Osteosarcoma removed in July 2015. No Chemo, she was at least 16. She is going strong although she is now completely blind. She is now close to 20 and her hobbies are eating and sleeping in front of her personal heater.

mom2shelby said
This is a great reminder that I still need to make one for Shelby!! I’m heading to our favorite coast next week… perhaps my creative juices will feel inspired!

I’m with you on that one. I had picked out Harmony’s ribbon, but haven’t done anything with it. It still resides here in my desk drawer.

I thought I would bump this thread today by sharing Maggie’s ribbon. 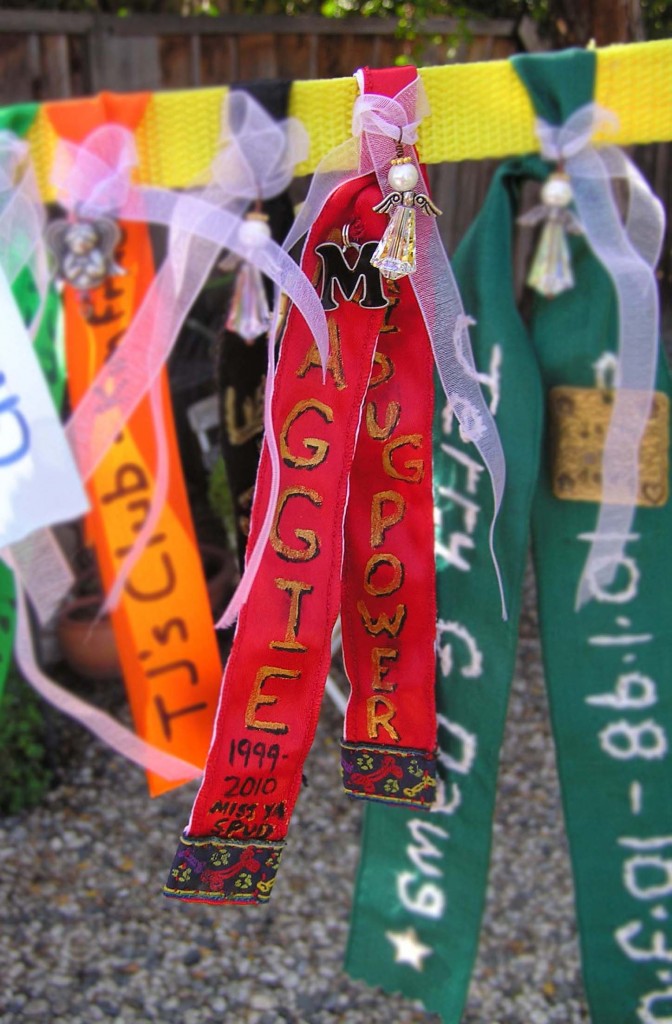 Maggie’s color was red so I started with a red ribbon.  One end has her name and dates, and the other end has Tri-Pug Power. I added a black ‘M’ charm to represent her coat color.  The two strips of red ribbon with bones and paw prints at the ends of the ribbon are strips off of her harness…the rest of the harness ended up on the Mag Tag. Under the dates it says ‘miss ya spud’, my favorite nickname for Mag.