'Received a life affirmng gift from sweet Sassy. Nothing can stop thatt light beam of love from glowing eternally in our hearts! 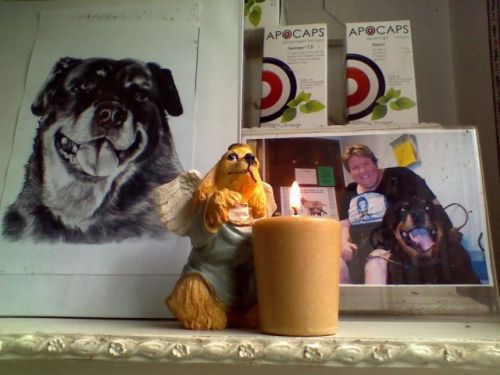 Sassy's picture and magic apocaps came in the mail. I knew what it was, so before I opened it, I lit a candle and broufht Haph Hannah to my side. I wish I could explain the feeling of her peace that came over me....and I could see it in Hapoy Hannah's demeanor too. It was as though...I wish K could explain it.....we were dednitely i a place of "oneness"...a very centered place with a quiet grace aurrou ding us.

I've already written Michelle and explained how we are honored by this gift. And to get the photos too,....that portrait takes my breath away. It means the world to me. And to have such a happh picture of Michelle and Sassy both grinning ear to ear......we are beside ourselves with appreciation. I disn't have a proer frame for the portrait yet, ohhh, but I will.

Everytime I give one of these to Hapy Hannah, we will send a silent "thank you" to Sassy Pants Sugar Bear. These are very special to us on so many levels.

With a grateful heart,

You are very welcome Sally & Happy Hannah.  This brought tears to my eyes seeing it.  Thank you

Beautiful, thank you for sharing this Sally and of course Michelle thank you for your generosity, I know that's not an easy thing to do.

It's just so beautiful that members care and support one another in the way that they do here. Every day  I am touched by the compassion in this community.

What a beautiful gesture.

Sally, shortly after joining Tripawds I got two things from the angel exchange.

One was a float coat from Spirit Sadie. She belonged to Lisa in Nevada. After losing Sadie, Lisa realized life isn't the same without a tripawd so she opened her heart to an young adult tripawd, Ranger.

I also received the famous red Ruffwear harness from Spirit Indi. She belonged to Raina in Washington. In time, Raina opened her heart to a little black tornado named Bender. Dakota is wearing Indi's red harness in many photos here.

Lisa and Raina are not very active here on the site now, but both have become my friends and we keep up with each other. Can you bond over a red dog harness or a yellow dog float coat ? You sure can!

The float coat that started with Sadie and then went to Dakota now belongs to beautiful Athena, the big brown girl who owns Jessica. Wanna know something weird? Spirit Sadie (and now Ranger) shared her home with a butterscotch Athena.

I no longer am surprised by things like this, but I am always gratified and humbled. It renews my belief that people are mostly good. There are enough bad guys out there to create a lot of press, but there are far more people doing truly good things quietly and with no expectation of reward or notoriety.

Michelle is one of them. Lisa and Raina are two more. Our worlds are enriched by the animal companions we share our lives with and by the people we meet on the journey, wherever it is we're going.

And Shari, you are one of the "good guys" too! Besides, anybody who still eats "Whoopers" is tops on my list of good people!