I wanted to introduce you Morgana, our black Labrador. She will be 5 y.o. in a month. We live in the southern part of Switzerland. 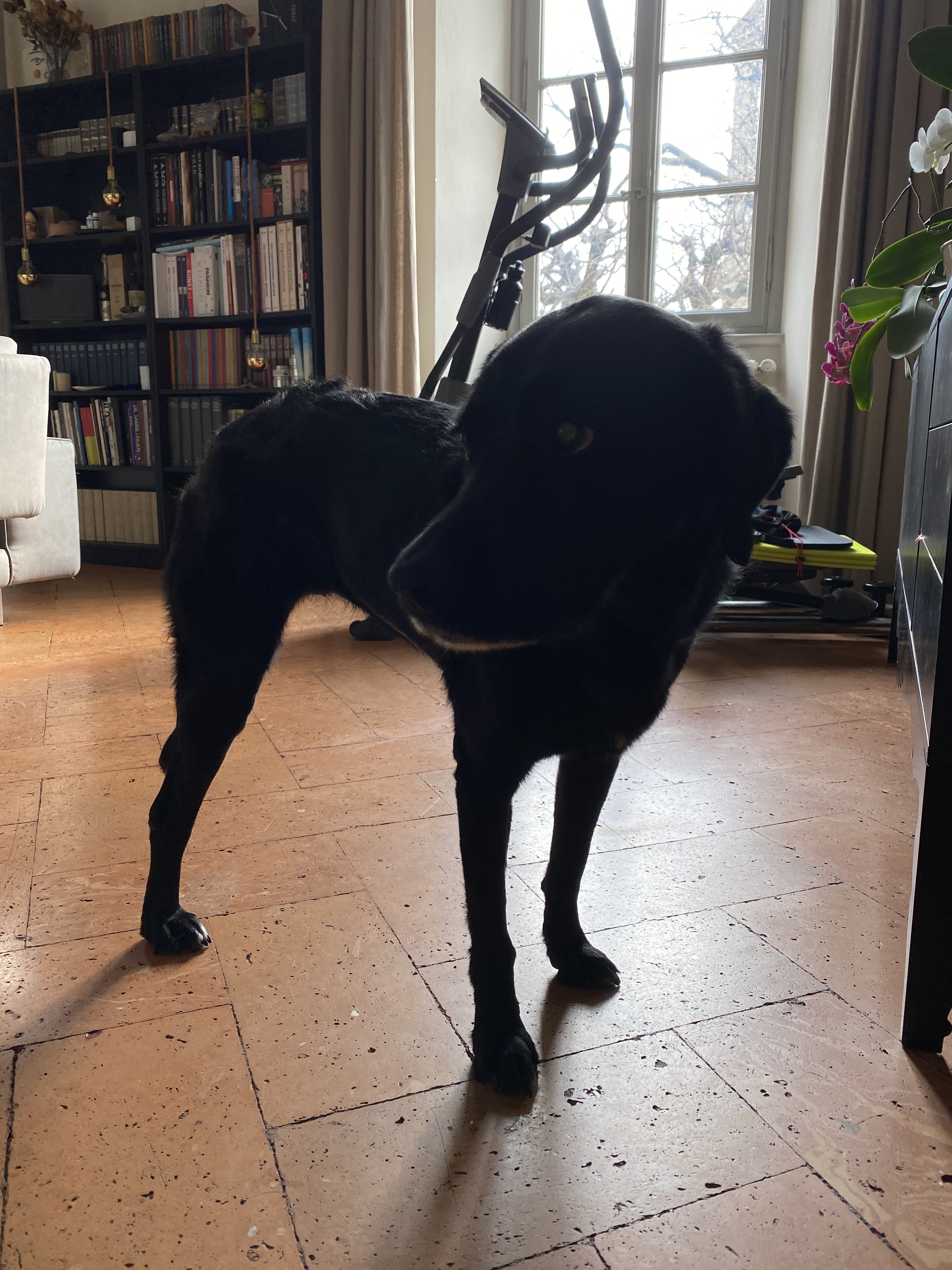 She got her rear left limb amputated last Tuesday after a diagnosis of Osteosarcoma. She had been limping for a few days, but we were not worried as we were aware that she had dysplasia, and sometime it happened that she would have slight difficulties in walking. As this lasted a bit longer we went to the Vet, and he also was of the idea that it was linked to the dysplasia. So he gave us anti-inflammatory for few days and an appointment to do Xrays.

That’s when the hard truth came out. They immediately did a needle biopsy and then suggested amputation.

We went for a second opinion at the Tierspital in Zurich, where CT scan and biopsy was done. All unfortunately to confirm the diagnosis.

In the meanwhile we had pain medications, as she has stopped using her back leg. This was probably positive for her recovery.

We did surgery here in Ticino this last Tuesday. With Covid-19 everything is complicated. On Wednesday afternoon she came home already walking. Or better, “hopping”. And immediately went for her treats box.

So far recovery has been much better than expected. She walks around and in the garden, wants to play. Worst part is the visual of the scar… but we’re so happy she is fine! She gets a bit tired at a certain point…

This site has been a great resource to prepare, especially psychologically. Luckily most advices on the post-surgery have been not needed so far… but it was good to be prepared.

Would be nice to know if any of you has a tripawd with dysplasia in the back hip. Any suggestion for additional care for her other leg?

Now we are scheduled to start chemotherapy on April 9th. Truly hoping she will go through that as well.

We have also ordered a few of the products for which I found reviews here (like the K9 immune pro), but deliveries from the US are very complicated currently… hope to get them soon.

any other advice from people who have young dogs? We feel the biggest issue now is limiting her energy… she wants to do so much!

Hi Sergio and Morgana, welcome. We are so glad that the recovery is going so well. Morgana sure has a lot of energy and that will serve her well now that she’s on three legs. She is beautiful! And don’t worry, that fur will grow back. You will get so used to seeing here with three legs that it will be hard to remember what she was like with four. And pretty soon all those four-legged dogs will look so odd! 😉

Meanwhile, about her hip dysplasia. As you will see in our Hopping Around Discussion Forum, it’s not uncommon at all for a Tripawd to have some sort of orthopedic problems. As long as you follow vet expert orthopedic tips like this, and are conservative with her activity level (manage it so that she is not constantly overdoing things and wearing herself out), she should be fine. It can also help to get her started on a good joint support supplement (we have a few in the Tripawds Nutrition blog ).

Our Wyatt Ray has had dysplasia since he was a puppy. He lost his rear leg at 8 months old and has been doing really great up until recently. He’s now 11 years old which is understandable that he’s having some mobility challenges. But he is still healthy and happy and able to get around on very short walks.

We would love to see more photos of Morgana and follow along on her journey. Thank you for joining us, it’s an honor to be here for you!

Sorry you and Morgana find yourselves here but, as you can see, it’s the best place to be for support and information. We all understand how shocking it is to be confronted with the thought of amputation. But we also understand how relieved we feel when surgery is over and our dogs and cats are onto a pain-free quality life. And yes, it’s Jerry said, once the fur grows back you won’t even see the incision site. For now though, think of it as a positive since it was a way to get rid of a very painful leg and to give your sweet Morgana so much more time for joy and happiness and loving and spoiling.

I think Jerry pretty much covered all the bases. There are also a lot of mind game puzzles that you can play with Morgana. Checkout out the Tripawds Gear Shop to find some of those puzzles that might help keep her occupied. Right now, it is important that she still stay restricted and just go out for short potty breaks and then back in for more rest.

It does seem that she is ahead of the curve as far as recovery goes this early on and that her pain is being very well-managed. Good job.

We look forward to following all of her adventures and celebrate all of her Victorious Milestones as she continues to be Morgana again! And yes, we must have more pictures of this beautiful girl

Stay connected and keep us updated

Thank you both for the great information!
We’re now just trying to understand how Morgana now behaves. She seems more tired than usual, and probably a bit bored. We are also trying to manage the rest of the crew (her sisterRoxanne, 2yo Labrador and 4 cats).
thanks for the suggestion on the games. Very welcome! Although she constantly seeks her ball to play!

You are so welcome. The tiredness is to be expected, it’s still super early in recovery. Her sister will motivate her to get moving soon, just wait! Keep an eye out for those pain signals though, as oftentimes dogs will overdo activity without realizing it until they hurt really bad. As Tripawd parents it’s up to us to regulate their activity to avoid that.

Keep us posted and let us know if we can help.

Thank you again! For the moment she is doing really fine. We have now finished with the pain treatment (only anti-inflammatory still). The first day she had been panting a bit in the evening (probably due to too much activity as you mentioned). We are trying to keep her relaxed and still… but it’s not easy as she wants to run.

Yesterday we got news from the Histologic analysis of the removed limp. Apparently, the results are confirming it is a bone tumour, but it is not certain it is Osteosarcoma. We’ll have another call now with the oncologist to assess if we keep the planned chemotherapy or not… Not sure iof it is good news or what.

As promised, a few more pictures and a video of her running.

And here the pictures: 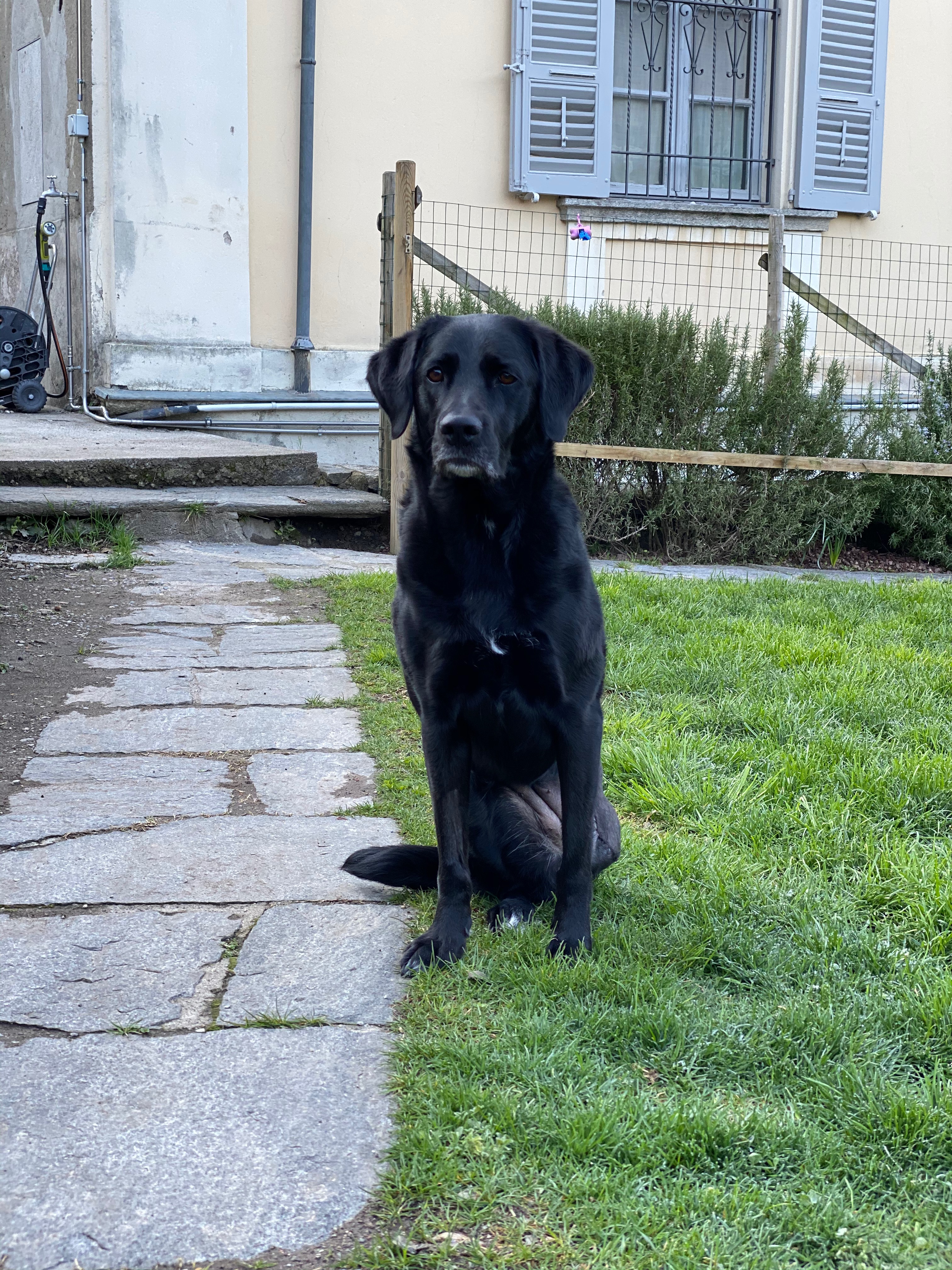 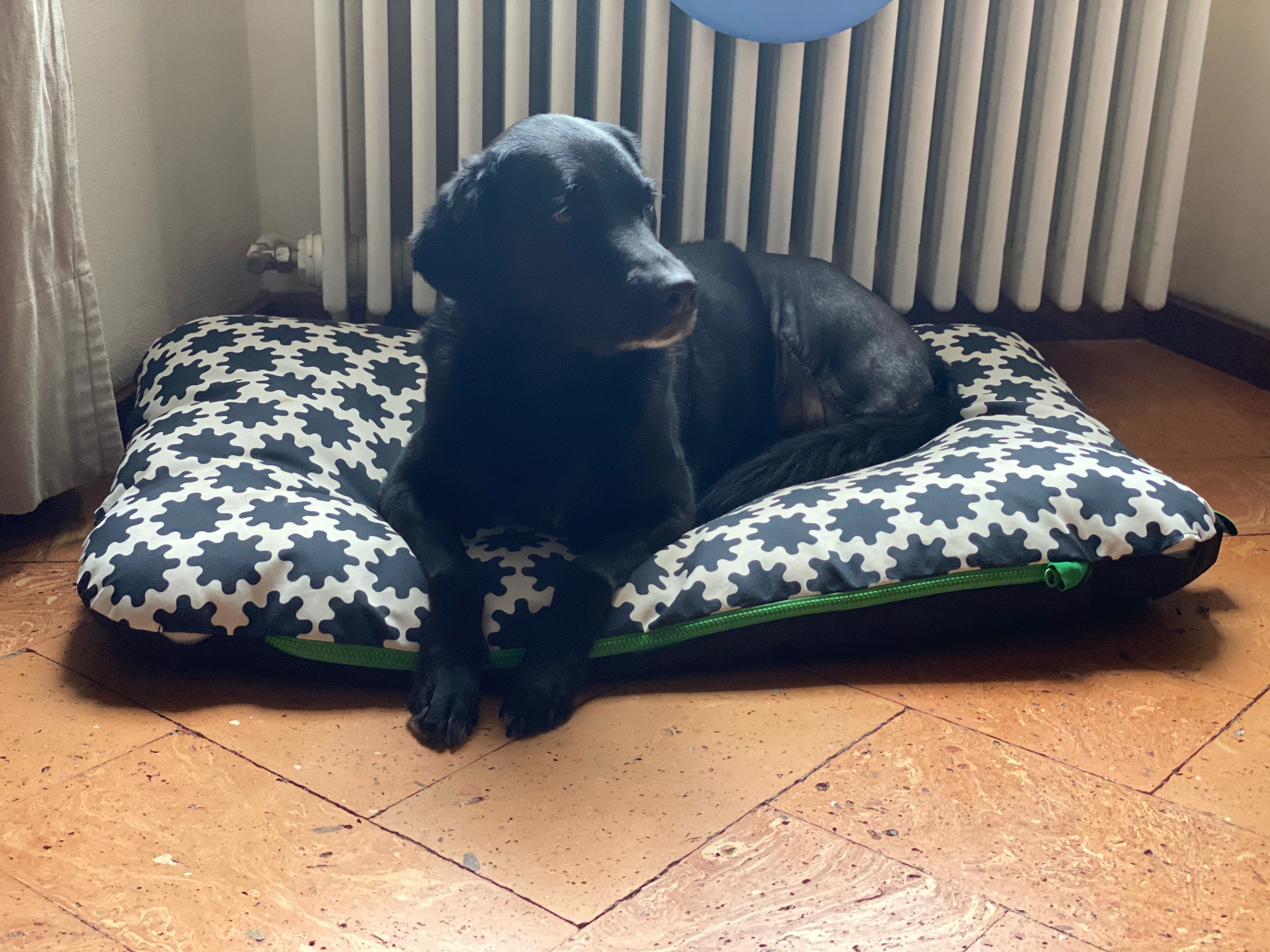 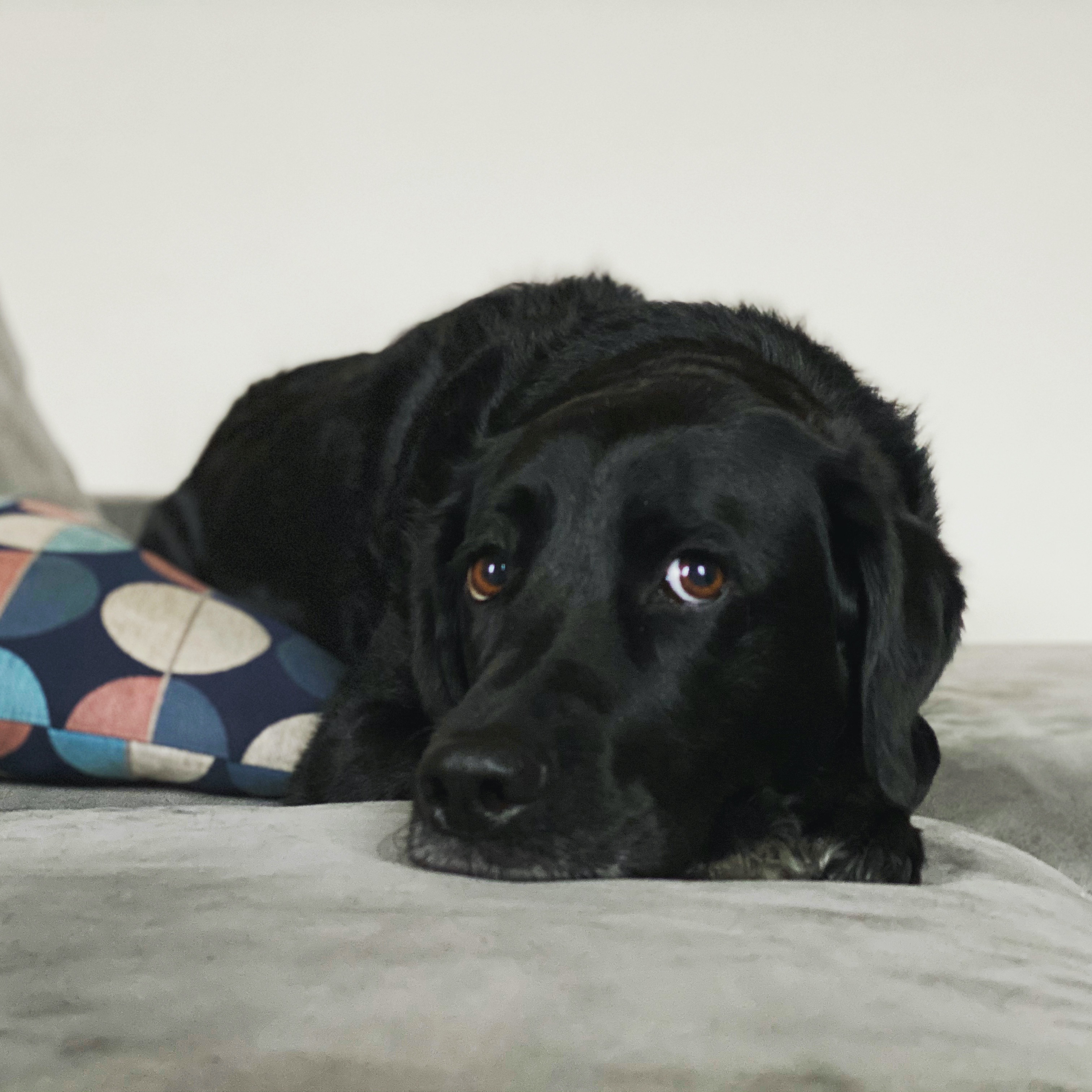 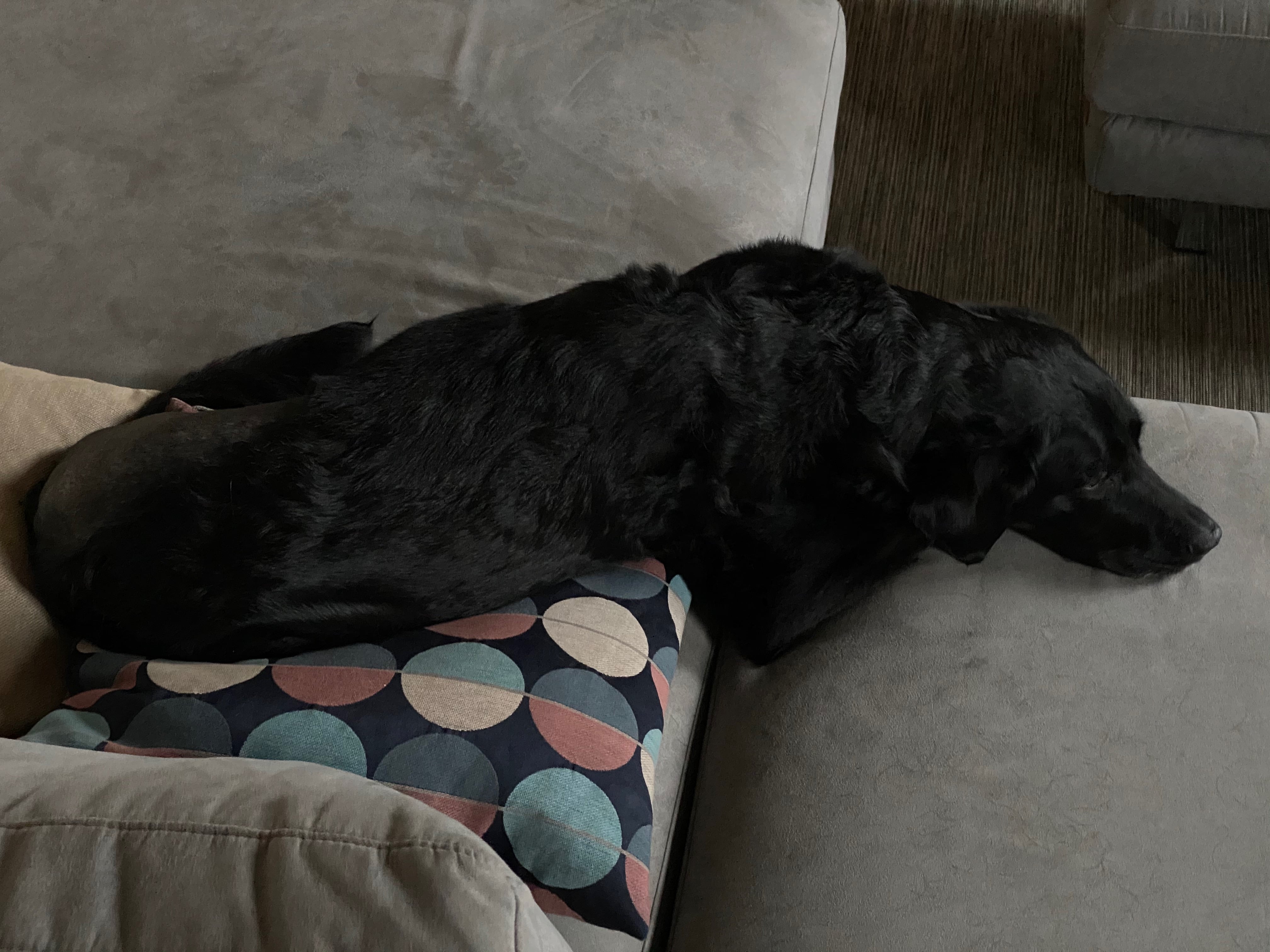 She is sooo pretty! I’m really glad to hear that things are good and she’s getting around so much better. You guys are doing a great job.

We’ll keep our paws crossed that the pathology report reveals something other than osteosarcoma.

I love the photos. Would you mind if I put one or two in our Tripawds Photo Gallery? The pictures are so helpful to people new on this journey.

Absolutely! You can use the pictures.

Oh cool, thank you so much. Her eyes just melt my

Just  catching up on your BEAUTIFUL  Morgana!  Love her name too.  It just seems to fit.

Sloooow and easy and patient during recovery pays off as she returns to her sparkling  self.  Her gait looks really good, especially  this early on.

And of she does show signs of pain like the pant5 you mentioned,  don’t  hesitate to give her more pain meds for a bit longer.  Of course only with Bet approval.   My Happy Hannah  didn’t  start tapering  off her pain meds until week three.  Every dog is different.

Thanks for sharing  your beautiful  girl with us.  Swe look forward to following  her journey  and celebrating  all her successes!