Entirely gratuitous pic alert (sorry), but this just delighted me so much, I couldn’t resist… They’ve never done it before. 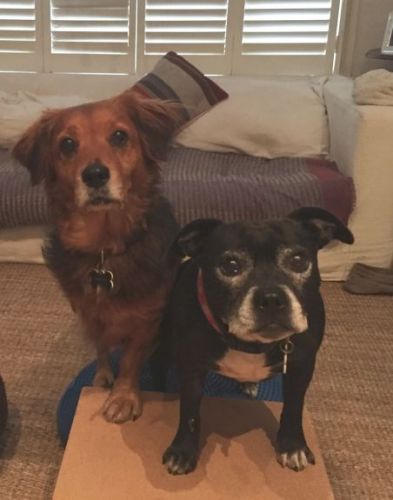 Roast chicken, Christine. However did you guess?! Though actually Elsie has this expression pretty much all the time, especially since I put her on a diet…

MAAAAADE MY DAY!!!! I am so thankful for so-called gratuitous photos!

I just love these two!!

We didn’t need the “gratuitous alert”…We needed the MEG AND ELSA CUTENESS ALERT,!!!

I agree with Sally, these two are incredibly cute. Adorable on their own but they are off the charts when together.

Thanks for showing us a new kind of workout.

How nice of Elsie to help Meg with her exercise!  lol  I’m sure the roast chicken had nothing to do with it!  The are just adorable

Obie is starting to join us when I’m working with Elly.  Elly is not pleased with this turn of events.

Love those two!  Such rapt attention!