One-Eyed, Three-Legged Jack not doing great, think he is bummed out

Hello all. Thanks for your support back in March when Jack had his surgery.

Jack is 12 yo and has been one-eyed since he was a year old thanks to the herpes virus. He has little vision in his remaining eye due to corneal scarring. So I say he is my one-eyed, half-blind cat. Sadly, this leg tumor thing came about on the same side as his missing eye, so he has a lot of right side issues now!

Jack’s recovery went well. He was even leaping up to the banister much to everyone’s shock and dismay. But a few months ago he started what I would say would be going downhill. He started losing energy, it seems like he was losing confidence in his walking. Where he had been eager to jump and hop and leap up to his favorite high perches, now he was hesitant to even try to climb the steps.

Now he is very stumbly and uncoordinated when he walks. He falls over easily and can jump up into the recliner, but that is the only place he will jump up to now. our bed is higher than the recliner and he has fallen a few times trying to jump up there and I think he has stopped trying.

It breaks my heart.

He has been to the vet and has had all blood work, which has come back clean, and a full set of X-rays, which shows no new tumors and no breaks or cracks anywhere. He has just a touch of old man arthritis, but nothing to explain his new rabbit-like stance or his hesitant way of walking. he now likes to put all of his weight on his backside and sit on his haunches like a little bunny.

so I don’t know if he has fallen enough times that it has just broken his spirit, if there is something else going on neurologically or that won’t show up in blood work or an x-ray, or if he just realized he is missing a leg and and eye. He is really having trouble balancing and navigating with that right side blindness. The vet is not overly concerned, but she is not with him all day.

When I hold him, he stiff arms his front leg like he’s looking for the floor. Keep in mind he has no depth perception. He’s a lot more nervous than he used to be in a lot of ways. And our big cat who has always been super friendly to him, keeps trying to mount him because he is a big old butt. Yes they are all neutered but I have no idea what’s going on there. Just the way to express his superiority I guess.

So far I’ve been unsuccessful in getting a good video of him walking and stumbling around. He’s great at avoiding the camera. If I get one I’ll be happy to share it.

Jack is on steroids, one little pill a day. I think it’s helping a little bit. I have a friend who keeps suggesting a glucosamine supplement for him. I have no experience in whether that would help or not.

Thanks for listening to my tale of Jack’s woe. I think the old Jack is still in there somewhere, but I got to figure out a way to get to it. I need to figure out what is going on with his little broken body and fix it up. I would love to hear any suggestions or experience that you have that might help. Thank you.

Geez, sorry sweet Jack is having all these new issues.

Arthritis  can definitely  have an impact.  Others can chime in in supple for kitties, but for dogs Rimadyl is good for arthritis.  Also Dasequan, and also Wellactin.

Another tjought… he may no longer have any vision in his remaining eye.  Has your checked  for  that?

Bet checked spine oit thoroughly  for any slipped discs, back issues, etc?  That could be a strong  possibility.

Does he seem to be in any pain?

Neurological  certainty seems like a strong possibility.   Does he react if you pinch his toes or mess  with his legs in anyway?

Sorry I don’t have much to offer. Our well informed kitty members will chime in.

Keep us posted.   Sending  you the best wishes for getting  this figured  out.

Awww Jack! I’m so sorry he’s feeling bad. But based on how you are describing his symptoms:

his new rabbit-like stance or his hesitant way of walking. he now likes to put all of his weight on his backside and sit on his haunches like a little bunny.

My best guess is that he is in some serious pain and cannot hide it any longer. I wouldn’t even jump to neurological problems yet, as these signs are typical of dog or cat who is hurting due to joint and muscle pain. Please review:

How to Spot Acute and Chronic Pain Signs in Cats

Pain Signs in Cats and Dogs: Learn the Symptoms

Did your vet prescribe any pain management at all? If not, get Jack to a veterinary pain management specialist ASAP. Not all general practice vets are up on the latest pain management protocols, and this is where a specialist can step in and figure out the problem. A credentialed animal rehabilitation therapist will also be able to give you a better understanding of what is going on, and the best part is the Tripawds Foundation may even pay for your first rehab visit !

Meanwhile, it sounds to me like his environment may need some altering:

He was even leaping up to the banister

As much as we love to see our new Tripawds do their old activities, that doesn’t mean they should. Modifying their environment is crucial to a long, pain-free life. I know it seems difficult to do this for Trikittes, but it can definitely be done.

Please consider blocking off high perches, or adding pet stairs, boxes, whatever, to give Jack a boost up to his spot. Limit his roaming areas right now, until you get the pain issue figured out. TriKitty parents here can chime in with other tips, and our new e-book, Cool Tips for Tripawd Cats, has lots of tips about environment modification.

I hope you can get Jack to a pain specialist this week. Let us know what’s going on OK? Give your sweet one-eyed Tripawd a scritch from us.

I’m sorry to hear Jack is not doing well – slowing down. You have received fantastic insight and advice!

Now he is very stumbly and uncoordinated when he walks. He falls over easily and can jump up into the recliner, but that is the only place he will jump up to now. our bed is higher than the recliner and he has fallen a few times trying to jump up there and I think he has stopped trying.

I agree it sounds like Jack is in pain. Something is tweaked, and on a tripawd, it happens easily & if he is falling off furniture and not jumping yes something hurts. The X-rays being clear is excellent news, X-rays do not show everything so know this needs more investigating to get to the bottom of what is going on. I would see if you can get him into a pain specialist or rehab they will be able to pinpoint what hurts and what the problem is.

Purrkins goes for acupuncture and chiropractic every two months I can tell you things get tweaked. Acupuncture/chiro has been what keeps Purrkins at his best. We can always tell by Purrkins hop when it is time for his next session.

Ditto Just because they can does not mean they should or that we should allow them to. It is just a matter of time before something goes wrong if we do let them carry on as they did on 4. Cats will use steps and appreciate easier ways up and down in any manner. Purrkins uses his steps. They should be placed in the areas they frequent most and in front of the areas they use. You can train them with treats to use them, and once they see yea, this is easier done deal.

These are the areas Purrkins needed to be adjusted whenever we went 3-4 months to give you a visual.
The atlas, thoracic 7-10 that number varies and his pelvis needs to be adjusted those are the consistent ones 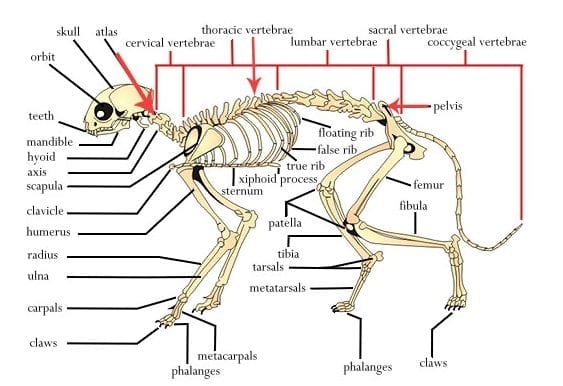 Now at every two months, We see only the Atlas needs to be adjusted, and it is obvious why any of those would get whacked out on three legs missing a front leg.

A joint supplement would be a great addition regardless. Sally gave you great supplements. Purrkins has been on one since the amp he used to be on Nutramax Cosequin, then Dr. Mercola Joint Support now he is on VetriFlex prescribed from his holistic Vet & Dr. Mercola Krill oil.

The steroid is helping that proves there is pain & inflammation & something more is needed to get Jack back to feeling like himself.

Let us know what you figure out.