Many dogs and cats join us for reasons other than cancer. In today’s Tripawd Tuesday, “Findley, Forever My Friend,” you’ll meet a tiny dog with a big, brave heart. 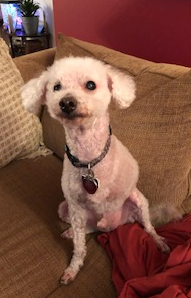 In memory of this special three-legged dog, his mama Tanya shares his life story with us today.

After surviving horrific abuse and neglect, being turned into a shelter in Tennessee, being taken in by Big Fluffy Dog Rescue, having his leg amputated from irreparable damage from the abuse, surviving maggots, multiple pressure sores, and life threatening infections, being transported from Tennessee to Baltimore, and living in two wonderful foster homes, I knew my newly adopted dog needed a new name that reflected his strong spirit.  I named him Findley.  Findley means, “A fair friend who is bold and courageous”. 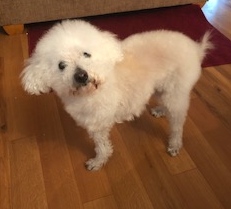 Findley surely lived up to his name. 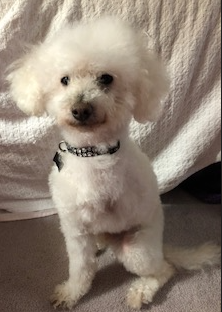 Findley was described by his vets as “enthusiastic”!

Truly a noisy, barky, bold boy! Findley enjoyed his laser therapy and acupuncture treatments and hopped around much happier and more easily after each session.  Findley was always eager to boldly chase the office cat at the vet, bark at the neighborhood dogs, and anything on wheels that moved; yet, he was equally as happy lying on the sofa, the bed, on his bed, or snuggled up next to his Mom-Mom in her easy chair watching t.v.  As noisy as he was, Findley somehow knew that he had to be quiet during a year of Distance Learning and was happy to lie on his bed or under my feet while watching me teach online, never making a peep. 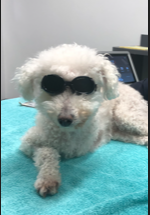 He eventually learned to be friends with several other dogs in both my mom’s neighborhood and mine. After a rough start in the friends department, I was always so happy and proud to see him wag his tail like crazy and try to play with some of his new friends!

Findley was a loyal friend.  During my illness and recovery, Findley stayed by my side. When I was in bed or on the sofa resting and recovering, he gently plastered himself against my leg so his stomach was touching me and his leg draped over mine.  Whenever someone approached me to help, he growled; always my protector. 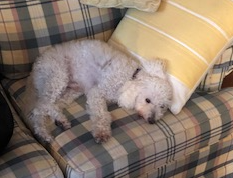 Findley attracted attention wherever he went…

maybe it was because of his missing leg, or maybe because of his crazy loud barking.  Either way, Fin let everyone know that life could be just fine, even wonderful, as a Tripawd!  Because of Findley, both my mom and I have met many people and made countless friends in both neighborhoods. 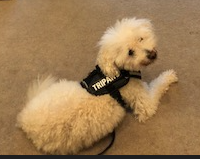 In late June, Findley was diagnosed with lymphoma.

He fought hard and remained brave, bold, and courageous.  We continued with some alternative treatments to keep him as comfortable as possible.  After a few weeks, although I knew he was trying to fight, it became too much for him.  He was tired. He looked at me and told me he was ready to go.  On July 20th, in the caring and capable hands of one of his vets, Dr. Wiley, and her technician Leslie, my bold and courageous friend took his last breath and passed away peacefully in my arms with his Mom-Mom and Auntie Carmel next to us.

I know that Billy, Cassie, Lucky, Bug, Sutter, Rusty, Hunter, Jackie, Blackie, Pippi, P’Nut, Bertram, Cotton and Shabaz our guinea pigs, and many other friends and family were there to greet and welcome him over the Rainbow Bridge. 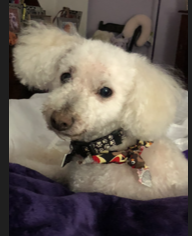 With deep appreciation and gratitude

I want to thank Fin’s doctors, technicians, and all the staff at Petvacx, Balance Veterinary Center, Veterinary Referral Associates, Center for Veterinary Dentistry, BluePearl Pet Hospital, his groomers, who all took such amazing care of Findley over the years, our friends at Sugarloaf Pet Gardens who will take care of him and provide comfort to our family during his final arrangements; as well as everyone else who helped and supported me, never gave up on him, and loved him!

Did you enjoy today’s Tripawd Tuesday Findley story? Each Tuesday, Tripawd dogs, cats and other critters from around the world can enter for a chance to be “Tripawd of the Week.” Just share your Tripawd’s story and you’re entered to win! On every Tuesday of the week, tell us about your three-legged hero. Just follow these easy steps: