I’m a fairly new member to the community as I joined around Christmas.  Some of you have probably seen my post in the Presentation and Diagnosis forum on my best buddy Wally, who was diagnosed with intramuscular hemangiosarcoma (HSA) right before Christmas.  Due to size and location of the tumor (left hind leg near his knee, imbedded is the muscle) the only way to remove it surgically was to amputate his leg.  After doing quite a bit of research, including help from some great folks on here, I decided to proceed with the oncologist recommendation to amputate his leg along with both chemo and holistic treatment for HSA.

I’m happy to report that things have gone well so far.  The first few days were tough (more on me than him), but since then Wally has been getting up and walking well on his own.  Also, the incision has healed well enough that the surgeon released him from his restrictions with the caveat that I have to slowly ramp up his activity over the next week or so.

Wally’s also released to undergo his chemo treatments and is receiving his first Doxorubicin treatment today.  Does anyway have any experience with this?  Would appreciate any recommendations and advice.

Also, something else I could probably use some advice on is sleeping arrangements.  During his initial recovery period Wally and I were sleeping on my guest mattress, which I had set up on the floor in my living room.  After being released from his restrictions yesterday, I put things back to normal and Wally and I slept in my normal bed in my bedroom on the 2nd floor of my house.  It worked out great for me, but I did wake up to a thump in the middle of the night and found Wally laying on the floor at the foot of the bed.  He may have tried to jump down, but I think he fell off b/c he had a pretty confused look on his face.  He wasn’t injured as after a minute or so he stood up, and I picked him up and put him back on the bed only more towards the head and middle of the bed.  This helped as he stayed on the bed the rest of the night, but I’m concerned he’ll fall off again and hurt himself.  Any thoughts or suggestions?  Hate to do it, but maybe I just have him sleep on his dog bed or the couch in the living room at least for awhile?

Hey Rich, thanks for starting a new topic. You forgot to share a Wally pic though 😉 I’m so happy that he’s doing so well, except for that little bed spill. More on that in a sec…

Wally’s also released to undergo his chemo treatments and is receiving his first Doxorubicin treatment today.  Does anyway have any experience with this?  Would appreciate any recommendations and advice.

Check out these Forum topics mentioning the phrase “experience with doxorubicin”

This helped as he stayed on the bed the rest of the night, but concerned he’ll fall off again and hurt himself.  Any thoughts or suggestions?  Hate to do it, but maybe I just have him sleep on his dog bed or the couch in the living room at least for awhile?

I’m soooo glad he’s OK. Do you have pet stairs? They are a huge help if you can get Wally trained to use them. Most pets are smart enough to figure them out, with enough training and bribery!

Great to hear Wally is doing so well!

I know he is an older gentleman…. how is his eyesight?  One of my Quad-Pug’s, Tani, was losing vision as she aged, it got pretty bad by the time she was 13 or so.  I woke up one night after a ‘clunk’ to find Tani a bit confused but thankfully unhurt on the floor.  I assumed it was just a one off thing but I saw it happen again a couple nights later.  I was reading with just my book illuminated and the rest of the room very dark. I watched her get up to re-position herself and she walked right off the bed! I installed a night light on the side of the bed she was falling off and it didn’t happen again.  I’ve also more recently had to install lights on our stair cases and near the Pug steps to the beds for Quad Pug boy Obie. He came to me at age 4 with one damaged eye and now at 14.5 years old his vision is quite poor.

If you think he is rolling off the bed you could try putting some type of bolster around him, maybe a rolled up blanket.  I would be very careful though that you don’t create something he would trip over.

Thrilled to hear how well Wally’s recovery proceeded and he is now moving onward and upward!

You got good jnput from Karen and Jerry on the bed issue.  Hopefully you can get the issue resolved.  And maybe it was just a one time thing anyway🤞

Hey guys.  Thanks for the responses.  I read through some of the Doxorubicin topics and sounds like it’s mostly positive, so that’s good news!  So far Wally is doing well.  He had a little bit of leakage last night while sleeping, but that has happened in the past so could be a coincidence.  The vet said if there are side effects they pop up 3-5 days after, so fingers crossed that he doesn’t.  I am going to run out to Walmart this evening and get prepared for it though.

I do have a pet stair for him to get into and out of the bed.  I noticed in late spring/early summer that he had become hesitant to jump up onto the bed, so I had bought one for him then.  He used it to get into the bed but would always hop down, so he used it to get into the bed the past 2 nights (with my assistance) but has put on the breaks hard when trying to go down them.  So I’ve been lifting him up off the bed to the floor and then helping him down the steps to the 1st floor.  Do most tripawds figure out doing down stairs ok?  In no need to rush Wally, but I was just wondering.

As far as I can tell his eyesight is still good.  I might look into a nightlight when at Walmart though.

Finally, as requested here is a pic of Wally on his not as comfy living room arrangement, lol.  Although by the look of the pic I’d say it’s comfy enough. 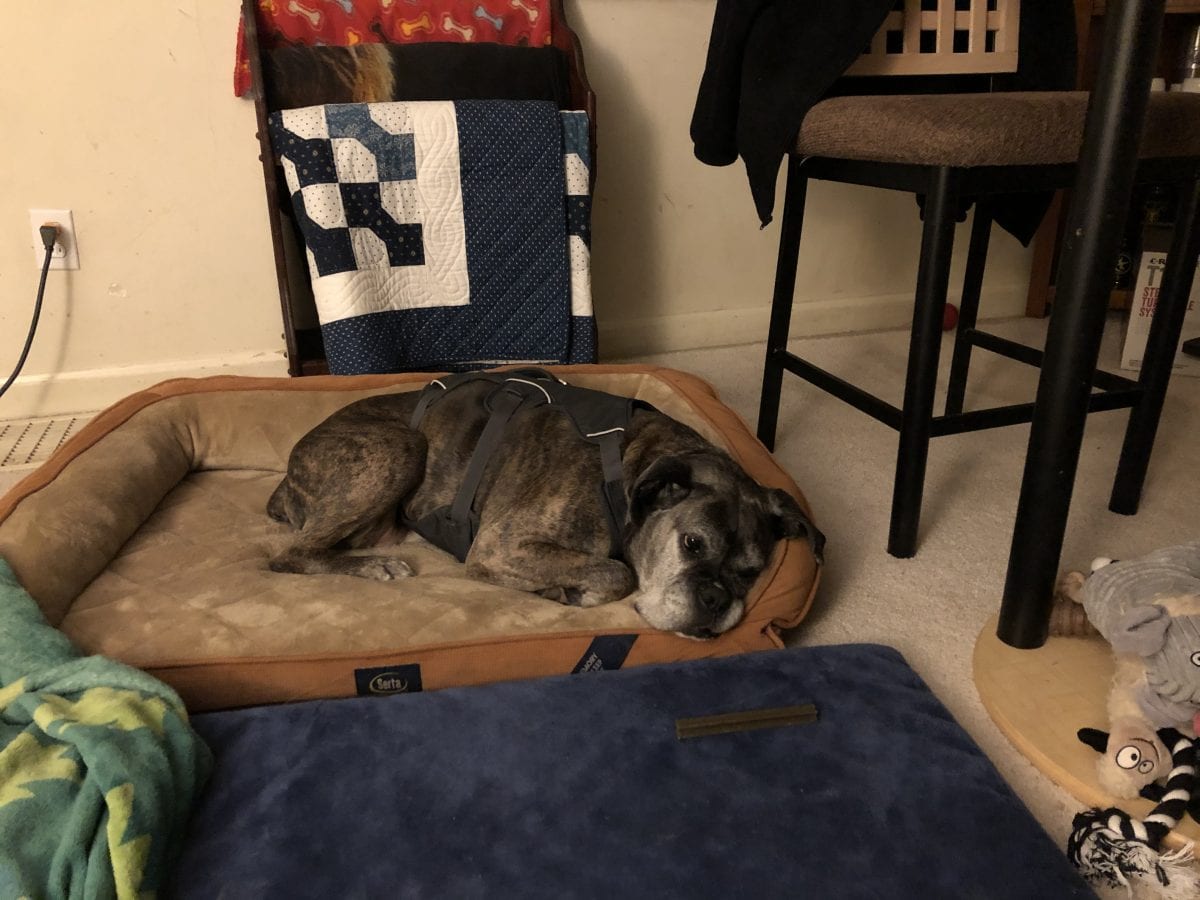 Wally, you melt my heart with every picture💖

My fro t legger tripawd INSISTS/DEMANDS getting on and off the bed on his own.  So, I have a very firm mattress (Big Barker Bed ) on the side of the side  he uses to get up and off.  You could also maybe get a pallet or two and cover them in some firm foam, etc.

Most dogs do figure stairs out, many still need harness assistance  just as a precaution.

Do most tripawds figure out doing down stairs ok?

Oh yeah, especially rear-leggers because it’s easier for them to go down than up. He will try to fly down them when you least expect it though, so keep an eye on him.

I love the nightlight idea! Never thought about that before because dogs do naturally see better at night, but I did notice that Wyatt Ray was getting more hesitant moving about in the dark during his last year with us.