Front leg amputation recovery- how to keep from scratching?

Day one post OP for Spaz. Turns 11 next month, and had his front left leg taken today. Doing pretty well. Has eaten, used the potty. Been a bit of a slug-a-bug, but to be expected.  Biggest concern is him scratching his incision site. How can I help keep this from happening? He’s an allergy dog, too, which means the itches happen more often.

Hey thanks for joining. Why did Spaz lose a leg?

The best way to prevent an incision problem is the dreaded cone of shame . Good pain management will also help. What medications is he on?

Yes, would definitely to hear more about Spaz (love the name) and the details of pain meds, why the amp, etc.

YAY for eating and potty!   Drinking and peeing are important.  Earing and pooping sometimes  are a bit off for a few days.

Sounds like you brought Spaz same day as surgery?  That can be enough watching  sometimes as they shake the anesthesia  and hospital meds off.

Right now, complete  rest, potty breaks and back to bed.  No stairs, no jumping,  etc.  This is majpr surgery and he needs time to heal.

And yes, he definitely  needs the cone to keep him from tearing at those stitches!  It only takes secon6 for them to tear out stitches  and open up the surgery site.  The Vet should have given you one.

Hopefully  you’ll have an uneventful  night and can get some rest.  The first seceral days and first week or so can be rough.  pain management   is crucial.

Let us know how Spaz is doing when you can.

Are asking how to keep from scratching the front incision with the back legs?  A cone won’t help with that but is probably necessary to keep him from licking or biting at it.

To protect the incision from the back legs you could try a tee shirt.  You could also try putting booties on the back feet if he will tolerate them- but that is only a part time solution since the feet need to breathe.  Or maybe some vet wrap.  Just be careful with his new balance and gait- you don’t want to mess up a new Tripawd trying to walk with stuff on his feet that he isn’t used to or would cause slipping.

My Pug Maggie lost a rear leg to mast cell cancer, but about 6 months prior to her amp surgery she had a tumor removed from her side.  I thought she couldn’t get to it but she managed to pull out a couple stitches at the very top of the incision by scratching with her back leg.  Lucky for me the incision was healed enough that she didn’t do any damage.

Does he take benadryl or anything for allergies to cut down on the itchiness?  He’s probably on plenty of meds so you may not want to add anything else but something to keep in mind if needed. Maybe the pain meds he is on will keep him from needing to scratch too much?

Thanks for the tips. I am mostly worried about his back leg scratching his front leg incision, so I knew the cone wouldn’t help with that, but I’ll definitely try the shirt for when I am not home with him. Very recommended keeping his incision open to the air as much as possible, so it should be ok for when I go back to work.

As for medications, he is on clindamycin for an antibiotic, and tramadol and gabapentin for pain. Also, he takes apoquil for his allergies (grass, trees, dust, ants, spiders-30 out of 90 that they test for)

Got Spaz when he was 3 months from the pound when he refused to let me leave without him. Whined everytime I walked away, and settled in my lap when they let me see him, ignoring all the toys. He stole my heart and has been my constant companion since. Got his name from when I would get home and he would run to me so excited that he tripped over his paws, did a roll, then kept running. With his personality, it definitely fits!

Now Spaz will be 11 in August, all 80+ pounds, so he is no spring chicken anymore. At the beginning of May he tripped up three steps to my bed and started limping. I took him to his vet and he did xrays and an exam, said he didn’t see anything on the xray, said it was clear and he probably pulled a muscle or pinched a nerve, gave him a painkiller and sent us on our way. What followed was a month and a half of appointments, lazer therapy, more pain killers, topical muscle relaxers, anti anxiety medications, chondroitin for his age, and another xray, and my  baby still in pain. I start looking for another vet because I want answers, and also found out he missed cancer in my aunt’s dog two weeks earlier and she had to be sent across the rainbow bridge because it was all over.

I get to the new very, and within a half hour he had an xray which showed cancer(most likely osteosarcoma) in the upper arm of his leg. A faulty large mass. The very called in the orthopedic specialists and they both recommended amputation. Knowing someone else who went through this with a hind leg, I knew it would be the best option. I started prepping, and a week later he had surgery.

There was initially concern they would have to take his shoulder as well, but the was plenty of clean tissue and the location of his growth showed he would be ok to keep it.

Surgery happened at 5 PM on July 10th, and I picked him up at 12 noon on the 11th. By 3 he sleepily at his lunch and by 8 he ate dinner as normal(fed him as such to ensure he got his meds on time). He has eaten breakfast and been out to do his business as normal.

I took the advice of another poster and cut a canvas bag along the seems, with a hole in one side for his remaining leg for me to use as a sling in case he needed a helping hand. So fat he hasn’t(knock on wood). The vet and all my reading is correct when they say the hardest part is making him slow down and not try to overdo it!

Well he is a dream doggie and overall it sounds like he is doing GREAT! I’m so glad you found a good vet for him. You done good! We had a similar situation with Jerry’s old vet, almost identical.

So yep, a cone won’t help with covering a front leg incision. But a surgery recovery suit can, or at the very least, a t-shirt. Since he has so many allergies already, maybe he’s doing it out of habit and a mild sedative like Trazadone can help relax him a bit?

Where did you upload your photos? Remember, first they need to go on a photo sharing site, like your own Tripawds blog, imgur.com, etc. Then, you copy the image URL and return to your forum post to paste it inside. If that doesn’t help let me know OK? Can’t wait to see the pics!

Not sure what I am doing wrong. Tried the embed code from Instagram first per the instructions, then tried copying the image from my blog post. Neither wants to work.

Not sure what I am doing wrong….tried copying the image from my blog post.

Copying the Image URL / Image Location from your blog or Media Library does work, and is the easiest way…don’t copy the image, copy the image location (URL).

PS: Your first blog post has been approved, and all your future posts will publish immediately. 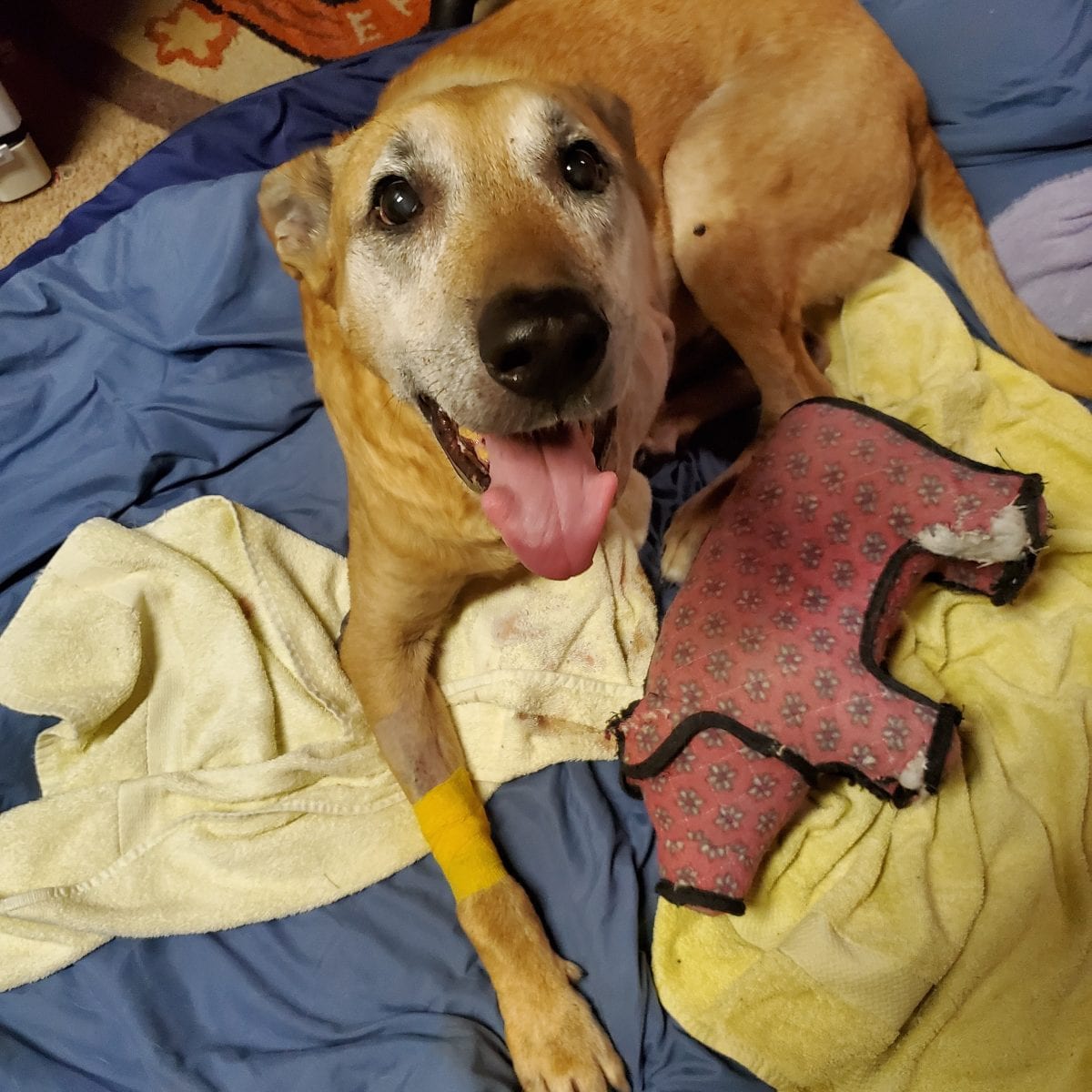 I loved reading how Spaz definately  picked you as his bestest, bestest buddy to travel thru life together.   And then hearing  how he got his name…..precious!!!

Hi there! I just adopted Phoenix, a 9-month old puppy who just had her front left leg amputated 6 days ago. I have found a t-shirt to be helpful with stopping scratching, and I know what you mean about the cone not being able to help when she scratches the incision with the back leg. I change the t-shirt once per day, and I’ve noticed when I use a softer or lighter cotton tshirt she tends not to itch as much. Probably because it’s not aggravating the incision as much. Maybe it’s something your Spaz might prefer as well?

Glad to hear his recovery is mostly going well!

katelyn said
I just adopted Phoenix, a 9-month old puppy who just had her front left leg amputated 6 days ago…

Thanks for the feedback and best wishes for a speedy recovery! Your future forum posts will not require moderation. For melp finding the many Tripawds resources, start here .