Samson looks great!  And I am glad to see that his feline housemate remains his buddy!

Yay for Samson!!! He's looking SO GREAT. No apologies necessary for the background stuff, we totally get it! Nopawdy plans for amputation either really, so we're in the same boat.

He's been through a lot and still doing great. What an amazing kitty! I hope you both have a restful weekend.

I love the one where Samson is laying down nnthe scatter rug and Cleo is just staring at him like she's watchling over him. Sweet!
Celebrating the stitches out over here! Eating ice cream and cake!!

Thanks for sharing these and Happy New Year right back to ya'!

So some bad news to report. The pathology results came back and it turns out that Samson has lymphoma. The surgeon said it presented itself in an atypical fashion and I take it he was surprised by the results. I didn't get to speak to him directly, just by voice mail, and was informed that the oncologist will call me this week to discuss chemotherapy options.

Well this is very sad. I was braced for the worst but that doesn't help much. Anyway, I'll try not to dwell on the negative until I know what our options are.

I wonder why this didn't show up in the pre-screening tests?

On a bright note Samson had his best day yesterday, having moved out of the recovery room and spending most of his time with us on the ground floor. He even persisted enough that I jokingly opened the door to show him the below freezing weather outside and he hopped right out into it! I got worried and corralled him back in but it was a great sign of his will.

I'll update when I know more.

Well, Samso showed you todaythat he IS om the road to recovery and he IS feeling better and he IS getting on woth living life to the fullest!

So let's do a big YAAAAAAAAAAY for Samson showing the world he's not ordnary cat!

Once you meet with the oncologist you'll jave a plan and that will make yoj feel better. I know Jill/Erica will see your post. Without going into a "lomg stor", I kow that Erica asked her vet about lymph nodes being involved (don't know if that's exactly the same as Samson's case), anyway her vet, who is real cutting edge, said that she's seen them get good quality time in spite of that. Basically, it didn't really change the prognosis with or without it. and chemo was still the treatment.

Anyway, nothing has reallh changed.....you removed the pain, you knew it wss most certainly so e for of that crapph disease.....and Samson doesn't give a rip about any f it!! He just jnlws he starting to feel better AND...as you so astutely noted...he has a STRONG WILL!! Samson is gettng better and better! Samson is his own "cat person" a d that head strong will of his is hugely important!!

Sooooo glad Samson is starting to recover and reclaim his position "out of hiding and back by your side!!

Hugs to all and extra warm milk...or catnip..for Samson tonight!

Well I'm reallly sorry, what a shock. You have a GREAT attitude and I'm really impressed; why spend time spinning your wheels until you know what you're dealing with?

I'm curious what the onco says about everything so do keep us posted. And like Sally said, Samson doesn't know any different, and just wants to keep living life and doing all the things he loves to do. What a way to live!

Thanks for the well wishes and positive encouragement! I'm trying to think the same way. It's not always easy but dwelling on sadness doesn't help much. It's good to cry things out and it's impossible not to feel sad but that's just time I'm not enjoying Samson's life.

No call from the oncologist today. Will e-mail the hospital and surgeon tonight to remind them.

I finally spoke with the oncologist on Friday afternoon. Samson has a rare form of lymphoma about which there is not much known. The doctor cited a national (USA) study that only included 20 cats with this diagnosis so there is not much to go on in regards to treatment.

That said I'm fairly certain we won't be exploring chemotherapy options anyway. Between the cost ($8-10K) and the quality of our lives (us and Samson) during treatment we don't see any value in it. Samson would have to go to the hospital once a week for 4 weeks, then 1 week off for 6 months. He'd have to spend a full day there. He'd likely hide from us when we brought him home. Then we'd repeat the whole process a week later. Add in the uncertainty of effectiveness and he might even die during treatment and I don't want the time he was he left with us to be miserable for him.

The doctor said that prednisone and cortisone can be used in palliative care treatment. Does anyone have any experience with this?

Aww I'm sorry for that news, that had to be tough. But it does sound like you've made the decision that's best for your pack. Chemo isn't right for everyone, that's for sure. And who knows, he may beat those odds and make the vets look silly. We sure hope so!

As for prednisone and cortisone...we have information here for dogs but I'm not sure how much of this applies to felines. I'll put a call out via social media and see what happens.

I know you want to do everything you can for Sampson. I applaud your thought process- I know it's hard when options are limited and the best path forward is not to treat aggressively.
Maggie was on pred for about 7 months as part of her chemo for mast cell cancer. I don't remember any issues, but it would be hard to say since there were so many drugs at once. Quad pug Obie is on and off a med with prednisone and he definitely drinks and pees more when he is on it.

Being a vet tech and choosing to treat my own sweet Pat with Prednisone instead of chemotherapy, I'm all for it. Many patients get a great quality of life using steroid treatment though life expectancy varies. You may get a few good months or you could get 2 years. No one knows their own destiny and I think it should stay that way, it keeps you treasuring every day and seeing the beauty of life. That being said, there are side effects to long-term steroid use. Increased urination, thirst, and appetite are definites. Using steroids at high doses can cause cushings disease and suppress the immune system too much. Regular bloodwork is a must while using long-term steroids. Most of the really bad side-effects don't show up for a few years so the impact of use in hospice care is minimal and using steroids at the lowest effective dose will minimize them. If you choose to not persue chemotherapy (and there is absolutely no shame in that) steroids are often the best way to go. Regular visits with your vet are to key to keeping Sam healthy and happy for as long as possible. Good luck, we'll be rooting for you!

Maverick is a wonderful miniature australian shepard born with a malformation of the front right radius/ulna, amputation performed on 11/4/13 at 6 months old. Follow his story at mavericksjourney.tripawds.com.

I'm so sorry to hear of the diagnosis 🙁  I know you are going to do everything you can with Sampson's best interests in mind.  I don't know anything about treating with prednisone , but wanted to send my well wishes and lots of hugs.

In the meantime Samson keeps on truckin'! He pines to go outside and finally can now that the weather is somewhat mild. Here he is this past Sunday on his favourite perch: 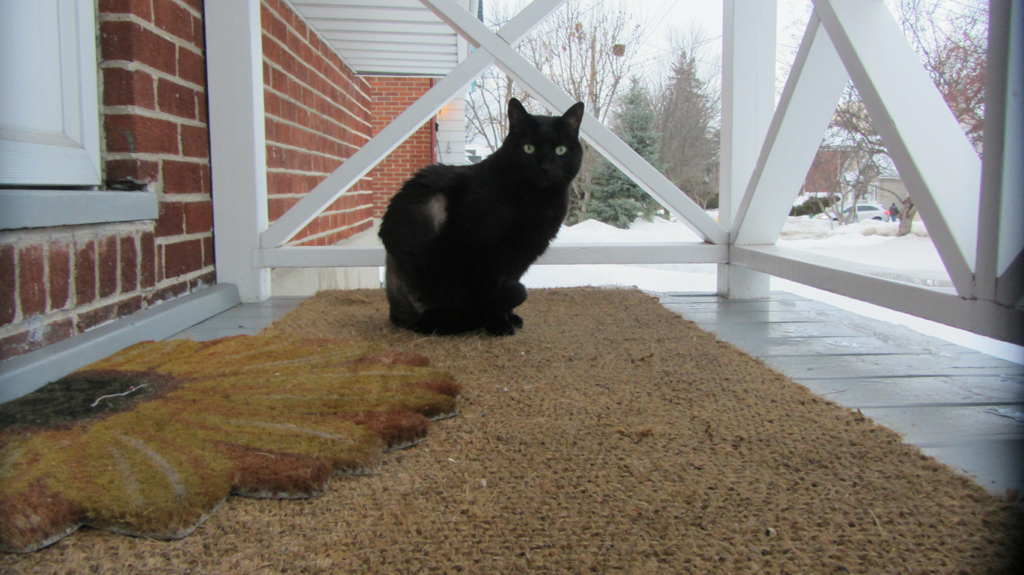 "Somewhat mild." Hahaha! You're tougher than this winter weather wimp, that's for sure.

Sorry for bumping an old thread but I've been remiss in not adding the final chapter to Samson's story. As you can likely surmise he has passed away. One year ago today, April 14, 2014. I had anticipated posting an update a day or two later but the mood never struck.

Samson hung on for almost two months after the bad news. His new tumour was manageable at first but just like the one on his back leg, grew progressively worse. Samson was a warrior to the end, never complaining (much) and enjoying our love and affection.

One moment in particular I remember was a time I decided to spontaneously come home for lunch to spend some time with Samson. At this point he was bed ridden and relied on us to transport him to his litter box. He waited patiently for us, and sometimes did his business where he rested. It didn't bother us. But this time when I got home he wasn't in his bed. I could hear a plaintive meow coming from the area of his litter box where he lay slumped against the wall. Proving his will and not wanting to make a mess he had struggled to maintain his independence. He made it to the box and hit the target but couldn't muster the strength to make his return. I lifted him gently in my arms and took him back to bed. I was moved beyond words.

During our last weekend together we knew the day was near. We passed the time peacefully together and I made the painful call to the vet on Monday morning. In hindsight it was a blessing that they could only take us in the late afternoon. We spent anxious last moments with Samson but would not trade those memories for the world. It was an unseasonably warm day I will never forget.

Here he is on the Friday before. It was his last foray in the sun and he loved every minute of it. Even now it hurts to see how strong he looked. Like I said, a warrior to the end. I love you Samson, Rest In Peace. 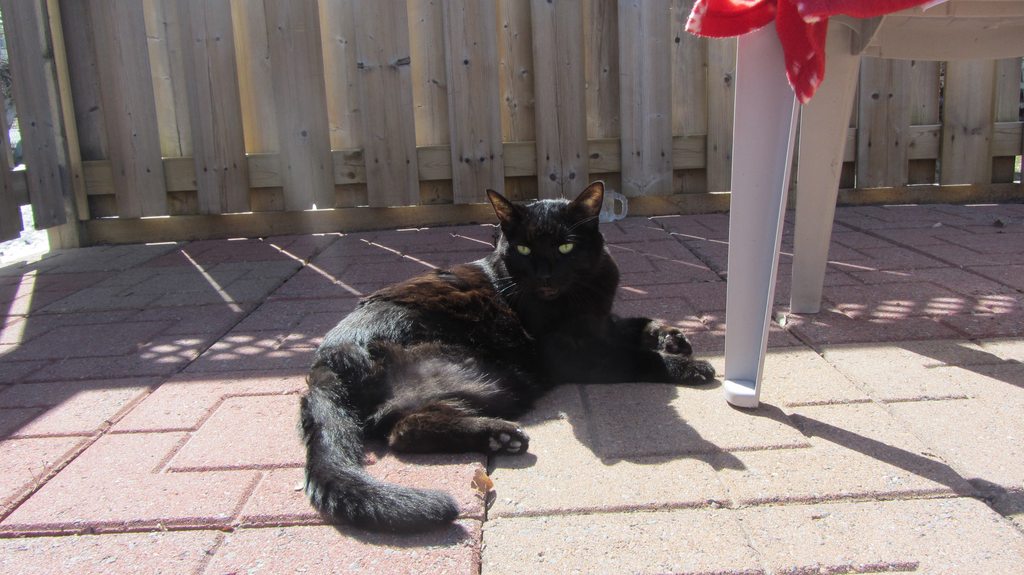 Thank you to everyone in this community. Your help, well wishes and support were incredibly important during Samson's recovery. I wish you all the best, to you and the pets in your lives.