It's been one year and seven months since our Wyatt Ray got his wings on 11/10/20. Life has been really quiet since then. But recently, he sent us an honorary Tripawd, Nellie the foster dog, to make sure we have some excitement around here!

Nobody Came for Her

We discovered Nellie on Saturday June 11. The Silicon Valley shelter caring for her said she would be euthanized on Monday, June 13 just a few weeks after arriving. Someone found her wandering the mean streets of San Jose, bedraggled, limping, and exhausted. She wore a pink collar and a tag that said "Chanel," but it didn't have a phone number, and she had no microchip. The good samaritan thought she was hit by a car. They took her to a shelter, but nobody claimed her.

Unfortunately, animal shelters everywhere are beyond capacity with relinquished dogs right now. Each day, many great dogs get euthanized through no fault of their own. There is just not enough room to care for the number of dogs getting turned in for economic and other reasons. Not even a "vet favorite" like Nellie.

Free At Last, Just in Time

Only the most adoptable dogs are making it out of shelters these days. Chanel is older, limping with an old leg injury, and overweight. She didn't even make it onto Petfinder or Adopt-a-Pet by the time her "PTS" (Put to Sleep) date was assigned.

Forty-eight hours before she was scheduled to take her last breath, we were smitten by her video. No, she's not technically a Tripawd. But her front left leg is barely functional, making her an honorary Tripawd in our eyes!

So we took action and located an amazing volunteer at San Jose Animal Services. Then we got in touch with a wonderful dog rescuer from German Shepherd Rescue of Northern California (GSRNC) (who also rescued Wyatt Ray ). 24-hours later, they got Chanel taken off the PTS list until we, Team Tripawds, could drive the 500 miles to take her in as our foster dog.

Nellie rode home to our dog house on wheels like she's done it all her life. It's only been a week, but so far we love everything about her! She is a very sweet, patient German Shepherd who fits in nicely with our nomadic lifestyle.

Nellie is a great co-worker here at Tripawds Headquarters. She is confident but not aggressive with dogs or people, she is playful but not in your face. She loves getting outside, exploring, and it's clear she enjoys being part of a pack again.

This sweet honorary Tripawd foster dog is estimated to be 8 years old, but we think she's younger. Her front left leg's wrist (carpus) is fused at an angle, which causes the awkward limp. Two veterinarians examined Nellie and both say the damage is either from an old injury, or it's congenital.

Either way, Nellie gets around as well as any three-legged dog. But her excessive weight and the bum leg hinders her mobility. To get a better idea of the extent of the leg damage, her pain, and obtain some weight loss guidance, Nellie will soon have a full wellness exam at Wyatt's AAHA vet clinic in Eugene, Oregon (near our present location).

She also has a consultation coming up with Rogue Canine Rehab. Team Nellie will work hard to help her feel like a puppy again!

It's a joy to have the attention and affection of a great dog like Nellie in our life. Stay tuned for the adventures of Nomadic Nellie as we embark on her mobility journey together.

Nellie is a very lucky dog!  She looks so sweet.  Her "honorary tripawd" title is fitting.  I look forward to hearing more about her journey with you guys!

WHOO HOO, Jerry & Wyatt Ray , you took your sweet time
She is beautiful, you can see in her face is a sweetheart and she looks like Jerry .
We are soooo HOPPY for you three. You won the doggy lottery, Nellie.
LOADS OF LOVE and SMOOCHES to Miss Nellie, soon to be a foster fail;)

LOL thank you guys! They sure did take a while but she is definitely worth the wait. This girl is purrfect for the pack!

Interesting how that foot drags in the grass but she can swing it forewarn on the hard surface.

I am thrilled for all of you! She is a beautiful pup and she has no idea how drastically her life is about to change for the better. Sending hugs, love and a big smooch and ear scratches for Nellie

You have have noooo idea how many lives you are going to touch, how many hearts you will work your way into and how you will inspire and bring joy to so many!!

Clearly you are right where you belong at this point in your life.  And clearly  Rene and Jim have already taken you jnto your their hearts.....their huge hearts💖💖💖  Yes, they still have Wyatt and Jerry nestled in their special corner of their hearts, but you will have your own special  place too!

It seems like Nellie is an "old Soul ", already enlightened  on so many levels.  To so willingly  welcome all her new adventures  with you already with such a gentle and inviting Spirit....yeah, sounds like a wise Soul.

Of course I'm thrilled for Nellie, for all of us, but I'm especially  thrilled that you two have joy and happiness  back in your lives to help fill the void Wyatt left.  I know your circumstances  required a very special dog, but it had to be soooo hard to wait so long  to bring a smile and purpose back into your hearts that ONLY a dog can make happen!  Sure, you have PURPOSE and MISSION  in your everyday interactions  and tasks here on Tripawds, but that's different  than the "purpose" a dog brings into your life 24/7.

CANNOT wait to hear more about Nellei and follow all her adventures.  Goodness  only knows what mission she is in store with you two and on  this joirney Jerry started you  years ago.  It will be spectacular!!!

Like everyone here, I'm over the moon Happy for ypu both, for us and especially  for NELLIE!!! 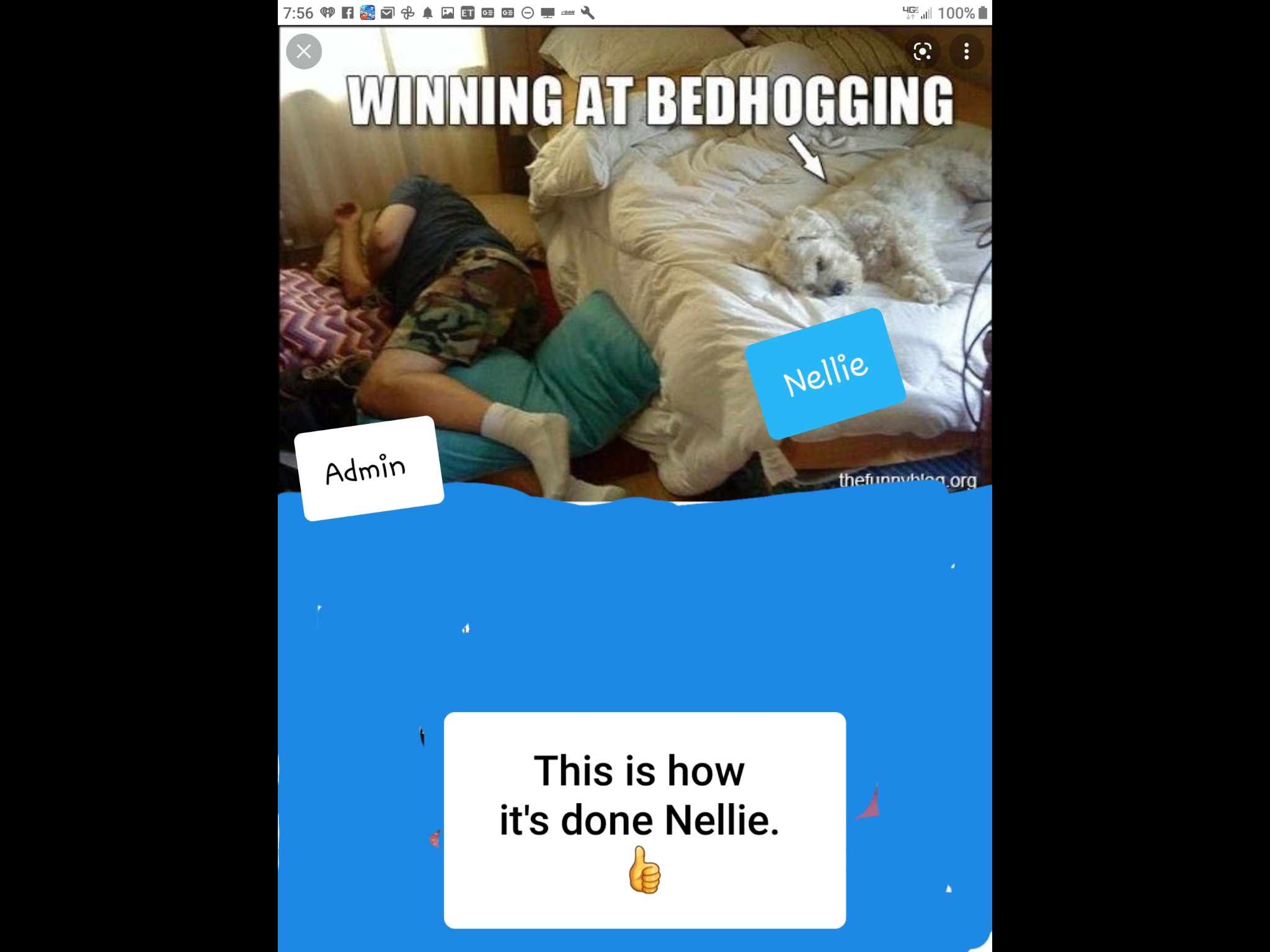 OMG; was cruising on FB and catching up on our girl Shelby's rescue group, Echo Dogs White Shepherd Rescue, and a few scrolls later there was Nellie!!! Couldn't get over here fast enough to read more and shed happy tears for you all. Congratulations!!! I've wondered when the next "right dog" would find you both and she is lovely. And well worth the wait. I can just imagine The Boys approving this sweet girl to watch over you.

Blessings and love all around. Best news I've heard in a long time.

AMD talk about another miracle!!!  Liz and Amgel Rpxie Rooooo. Roooo are here!!!!   Wonderful to hear from you

WOW! We are grinning from ear to hear here!

Interesting how that foot drags in the grass but she can swing it forewarn on the hard surface.

Yes we noticed that too. I believe it has something to do with proprioception (awareness of one's body in space). Walking on flat surfaces is easier, uneven surfaces are more challenging. It's why rehab therapists tell us to walk our dogs on uneven surfaces as much as possible, to keep their proprioception sharp. She has a rehab appointment week after next, I'm going to ask the team about it.

Aww come on, she really IS a foster!

Admin guy thought of Nellie. We didn't care for her original name, Chanel. But it sounds like Nellie, and he thought it would be an easy transition for her. It has! Also, Admin says he used to get called Nellie when he was a kid, since his last name is Nelson.

So her official name is Nellie B. Dawg. We had to give Wyatt Ray Dawg some props that way, since he definitely had a paw in making sure we got a nice calm pointy-eared German Shepherd again! For a long time we had some very specific parameters about what we were looking for in our next dog (front-leg Tripawd, preferably a GSD, but smaller than 65 lbs). Some dogs came very close. But when we didn't find the dog we thought we had in mind, Wyatt obviously said "Enough! Here's a sort-of-Tripawd! You'll love her!" And we do. She's awesome.

Thanks for the very sweet messages. We are over the moon here!

Congratulations.  I knew Wyatt and Jerry would eventually PUSH YOU into making a decision 🙂  <3 <3 <3  I love her she is very relaxed and calm.  Yay Nellie you found 2 wonderful pawrents

Haha thanks Michelle! Yeah when we saw that little black and white photo of her, there was no going back. She's a great FOSTER DOG! 😉

She sure does have some resemblance  to Jerry photo wise.

Ih well, at least she will know love and happiness  and joy with you two......if only for a short while😟

Definitely has markings and a silver finish to her coat very similar to JBD...another sign. Like you needed more.

LOLOL Sally, you're killing me..."a home with five kids all under the age of six who will ride her like a horse". My dear, you have not lost your touch.

Keep up the good work!