We are so proud! Happy tears are welling up in our eyes as we proudly announce that one of our own, Tripawd Vizsla Bart, has received the AKC Humane Fund Awards for Canine Excellence (ACE)!

Bart and his mom Darcy have done so much to show the world that cancer and the loss of a limb need not stop anyone from living life to the fullest. They've been a part of the Tripawds community since his diagnosis in 2008 and last year we had the pleasure of meeting them both in Georgia. They are amazing to say the least.

And now this dynamic duo will be honored with the ACE award presented at the AKC/Eukanuba National Championship in Orlando, Florida on December 14!

You can read the full press release here but this is the snippet about Barty:

The AKC® Humane Fund Awards for Canine Excellence (ACE) commemorate five loyal, hard-working dogs that have made significant contributions to their communities. The awards are presented in each of the following five categories: Exemplary Companion Dog, Law Enforcement, Search and Rescue, Service and Therapy. This year's winners include a Newtown therapy dog and an active amputee that helps wounded warriors overcome their own injuries.

All the ACE recipients will receive $1,000 to be awarded to a pet-related charity of their choice and an engraved sterling silver medallion presented at the AKC/Eukanuba National Championship in Orlando, Florida on December 14, 2013. 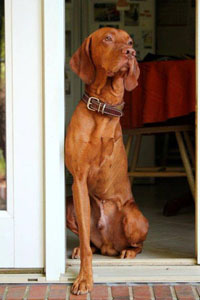 Bart was only three years old -- a strong, young dog from a well-planned breeding that had already completed his AKC conformation championship – when he developed a limp during hunt and field season.

The veterinarian found a lump on the top of his left shoulder and the x-rays revealed 80% of the scapula eaten away by cancer. Bart had his entire front left leg removed.

But, Bart was a true working dog. In October 2008, only four months after his amputation and three weeks after completing chemotherapy, Bart earned his Senior Hunter title and continued to the Master Hunter level. There were times during their hunt tests when judges would look sympathetically at the poor girl and her three-legged dog, but sympathy soon changed to awe as many were moved, often to tears, by Bart's courage and determination. Bart earned his Master Hunter title ten months after his amputation and became the first Vizsla in history to have completed the title with three legs.

I just saw this beautiful post about Bart's award and I thank you from the bottom of my heart!

We are all so proud of Bart and what he does and continues to do and the fact that he was nominated for this award by the Vizsla Club of America (unbeknownst to me) and actually won it is exciting beyond belief. Never in my wildest dreams could I have thought that Bart would have taken me on this type of a wild ride!!

Gooo Barty & Goooo Tripawds Everywhere!! You are ALL HEROES in my book!

Oh Darcy, you're gonna make us all water-eyed again, we can't tell you how THRILLED we are that you and Bart will be getting his amazing honor. WOOOHOOO!

Sooooo sorrh I missed this the first go 'round! I saw the "tuesday tribute" and had tears of joy and ow I get to do the "tear-joy thing" all over sgain!!

Tnis is just sich an amazingly i spiratinal duo! And for Bart to be a role model for the "Wounded Warriors Project"...OMD! Talk about touchi g lives-----living a lofe of mea ing------empowering others-------this dog was born with a mission in mind and is continuing to fulfill it beautifully!

Thanks for allowing us to be part of his journey. It's a privilege.

With deep admiration for you both,